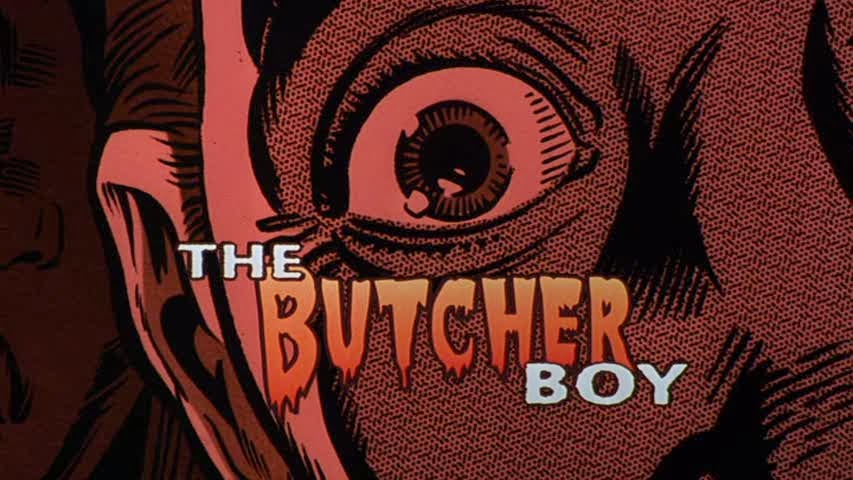 Country: Ireland
Title: The Butcher Boy (1997)
12-year-old Irish lad Francis (‘Francie’) Brady has no shortage of energy. He runs about town with his best friend Joe Purcell, chipping ice from the local fountain, cussing out fish from his brookside fort, watching the Cold War rage on TV and bullying the well-to-do Nugents, namely Philip and his English-sympathetic mother. By narrating the story in flashback, Francis is able to overlay past and present tense commentary on his life (which interleave in delightfully confusing repartee), revealing that despite Francie’s wretched home life under a mentally deteriorating mother and burnt-out alcoholic father, he remains gleefully imperturbable on the surface while girding himself about with wild TV-and-comic-influenced fantasies within. However Francis’s hyper-extroverted coping mechanisms are soon indistinguishable from outright psychopathy and, goaded by Mrs. Nugent’s combination of condescension, pity and prudery, he ransacks her house, writing “pig” on all the walls and taking a dump on her carpet. He is packed off to a Catholic boarding school where he befriends a shell-shocked ex-IRA gardener and starts to make progress with a patient counselor, but is swept under the carpet and back on the street after being molested by a priest. Back home Francie excels as an assistant butcher and channels/vents his emotions into drinking and brawling, but being rejected by Joe and orphaned by his negligent father pushes his over the brink. Francie is institutionalized, but he’s too restless to stay long and is soon at large again, violently unhinged and fixated on the idea that Mrs. Nugent is the root of all his problems. 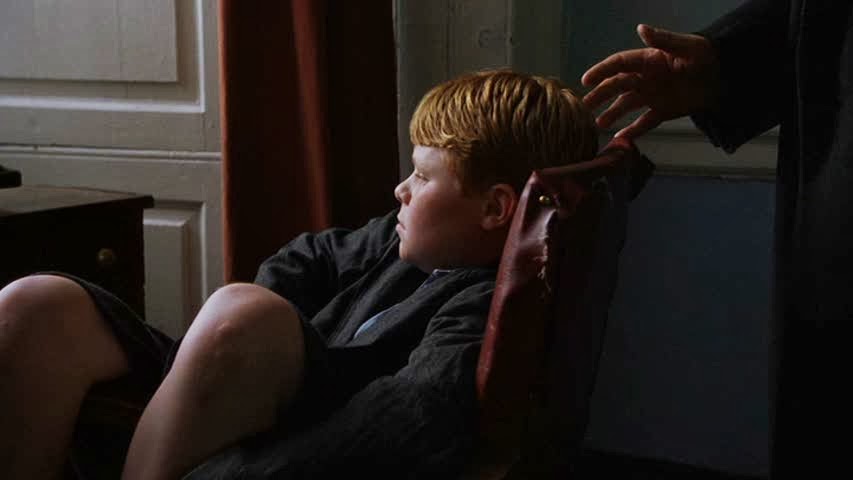 While The Butcher Boy might not seem all that similar to director Neil Jordan’s better known works, The Crying Game and Michael Collins (which were perhaps the more obvious films to write about), it shares his overarching interests in identity and politics. These thematic concerns cause the film to deviate from typical evil-child-runs-amuck thrillers both in terms of Francie’s unnerving yet understandable psychoses and its larger implications within the context of mid-Century Ireland. Francis, despite unrepentantly committing acts usually unforgivable for a protagonist, still manages moments of unexpected sympathy like when he catches his mother about to commit suicide and gently defuses the situation or when he is snubbed by Joe, unable to see that he’s projected an imaginary friend onto a real person who has long since moved on. There are moments of almost heart-breaking transparency where we can read the loneliness and frustration in Francis’s face, but all such emotions are loudly steamrolled by a combination of cheerful declamation, interior monologue and retroactive narration that drown out, sometimes literally, the unwelcome intrusions of reality. 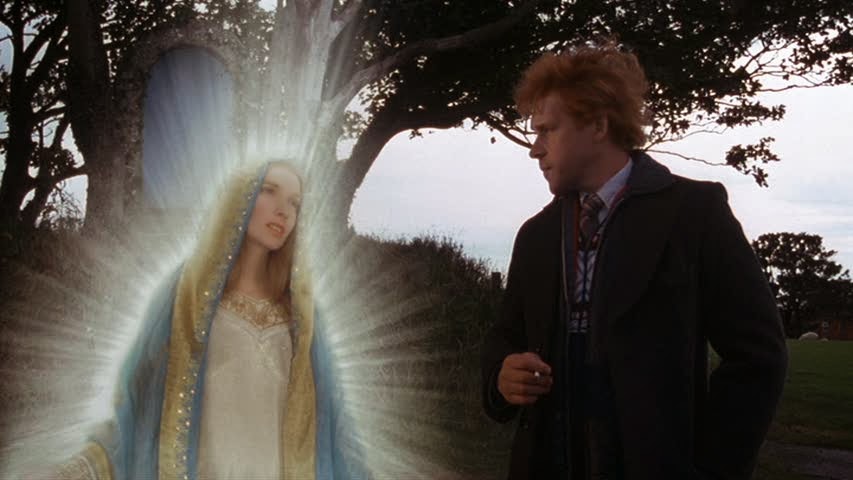 However it is this very refusal to see himself as a victim, taken to pathological extremes, that makes Francis something of an admirable rebel (and perhaps explains the films disproportionate popularity in Ireland, where it tops viewer polls) who spits at authority, propriety and conservative ideals, adopting the exonym ‘pig’ with defiant pride. Patrick McCabe, author of the source novel and screenplay adaptions, offers up a simultaneously dead serious and tongue-in-cheek checklist of ‘causes’ for Francie (poverty, alcoholism, a broken home, sexual abuse, a violence-saturated pop culture, a class inferiority complex, Catholic guilt, colonial baggage, nuclear paranoia and a genetic predisposition for mental illness), but Francie isn’t interested in being a consequence of societal problems, he’d rather be the problem. It’s more fun. And recognizing that sick truth is one reason why The Butcher Boy is so funny and freeing, even while it never stops being, even for a moment, incredibly disturbing. 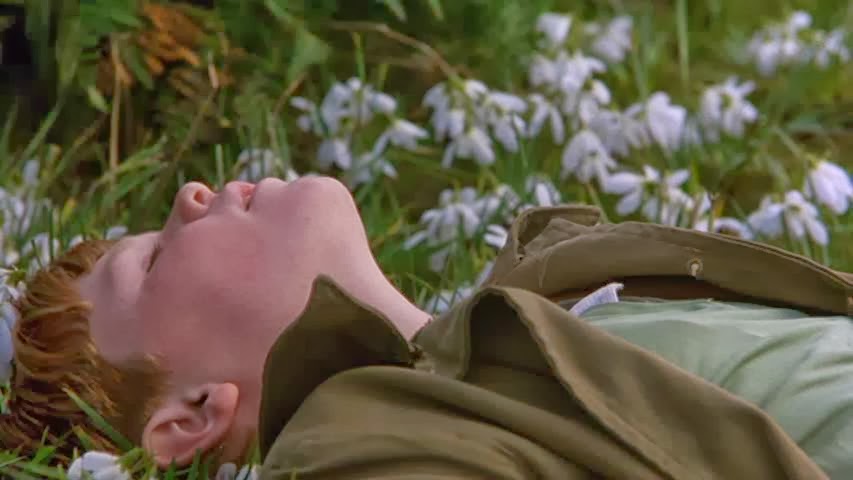 My Favorites:
Room (2015)
Bloody Sunday
In the Name of the Father
The Secret of the Kells
The Crying Game
The Butcher Boy
Hunger
Kisses (2008)
The Magdalene Sisters
My Left Foot
The General
Song of the Sea 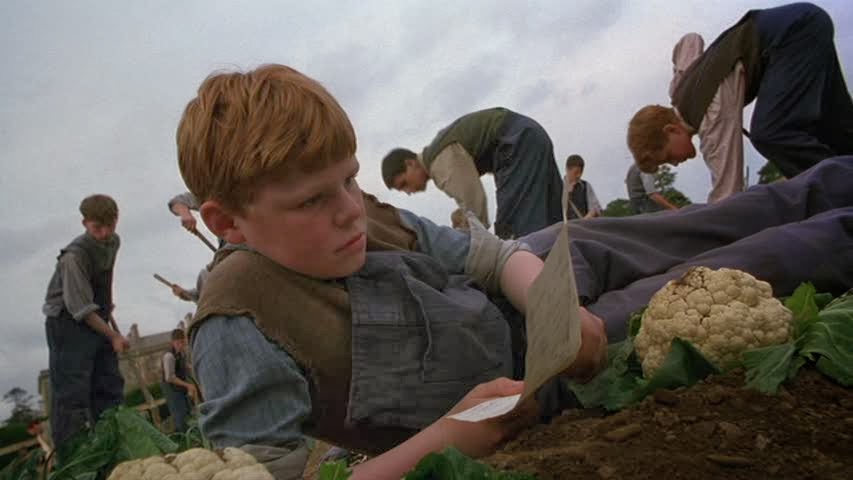