Country: Mauritania
Title: Timbuktu (2014)
The film is set during the 8-month occupation of Timbuktu, Mali by Ansar Dine, a militant Islamic movement associated with ISIL. They impose sharia, an extremely strict set of laws that includes the banning of music, singing and sports, forcing women to completely cover their bodies, and levying heavy punishments like lashings and stonings for violations.

The local population, unassuming shepherds, fishers, farmers and shopkeepers, who’ve never needed a standing army and practice Islam as a private, inward-directed faith, are at first merely bemused and annoyed by the newly-arrived outsiders. But their policies, pitilessly, disproportionately and often hypocritically applied, soon turn the once-vibrant region into a fearful and despotic hellhole. The main character, Kidane, is a leisurely but very loving husband and father, who grazes eight cows in the grass-patched dunes outside the city. When “GPS,” the pride of his herd, is killed by an angry neighbor, Kidane gets caught up in the senseless ‘justice’ of Ansar Dine’s reign.

Veteran helmer Abderrahmane Sissako has shown a welcome inclination to tackle contemporary political topics, but what makes Timbuktu work is that it has a great deal more grace and moderation than we’re used to from political pieces and social commentaries. It functions on a much smaller and more intimate scale. The “heroes” of the story are members of a quiet unambitious family so inconsequential that the occupiers are barely aware of their existence until circumstances make them just conspicuous enough to merit a quick, callous, informal trial. The soldiers of ISIL, on the other hand, aren’t depicted here as an army or terrorist organization so much as a small-time gang; self-interested men who thrive on seeing their own will imposed on those around them, something only possible because they happen to have guns. They shroud themselves with a religion they little understand, warping it to their short-term, petty desires while disregarding the articulate common sense of the local imam.

Sissako’s style has intermittently flirted with European slow cinema and he’s developed an eye for breathtaking telephoto scenes that increasingly merit being held for a minute or more as we fully digest. Perhaps the best is a long shot of two men separating after a struggle in the middle of a shallow lake, lurching to land, their expressions far too remote to read, but in the full awareness that their lives are ending. Another hauntingly beautiful scene weaves around a soccer match taking place with an imagined ball, the real one having been confiscated as un-Islamic.

Timbuktu also has Sissako’s best script to date, balancing the slacker ennui and mute acceptance of his Waiting for Happiness and the in-your-face polemics and foregrounded debate of his last feature, Bamako, in which an African village literally puts the IMF on trial.

Major Directors:
Abderrahmane Sissako
Posted by FilmWalrus at 10:30 AM 1 comment: 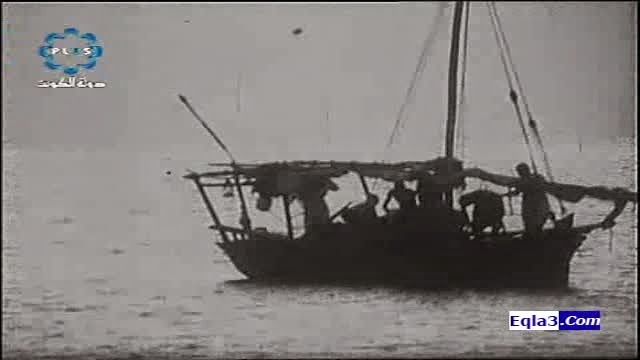 Country: Kuwait
Title: The Cruel Sea / Bas ya Bahar (1972)
For the men and women who eke out a living on the coast of Kuwait, the sea is both friend and enemy, generous giver and ruthless taker, and at various times a meal ticket, a home and a grave. Moussaed, your typical handsome-but-poor young man is in love with Nora, your garden variety beautiful-rich-out-of-reach woman, who reciprocates his feeling despite her father’s objections. Moussaed is more successful at vetoing his dad, determining to make his fortunes as a pearl diver even though his father’s arm was paralyzed by a shark pursuing the same career. 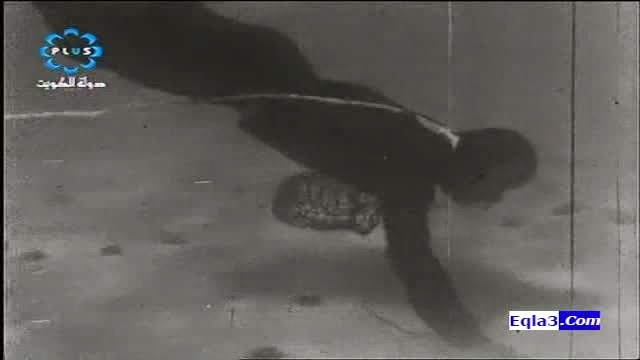 Once underway on a four month tour of duty, Moussaed partners with Badr, his only friend on the conspicuously solidarity-starved ship, and the two are reasonably successful at first. However, it soon becomes clear that they are playing a dangerous lottery rigged against them by both man and nature. The prolonged time spent submerged and the constant pressure changes saddle Moussaed with an excruciating earache while other illnesses plague the crew. Forced to push on anyway, his arm is caught in an underwater cleft and, after a terrifying struggle, he dies. 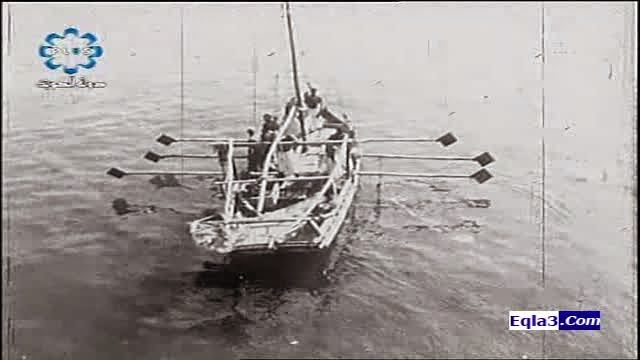 Late that night Badr cuts open the clams from his ex-buddy’s basket and discovers several shimmering pearls. The ship returns from the season late. In the meantime Nora has been married against her will to a wealthy merchant. Badr gives the pearls to Moussaed’s parents, but, overcome by grief, his mother throws them back to the cruel sea. 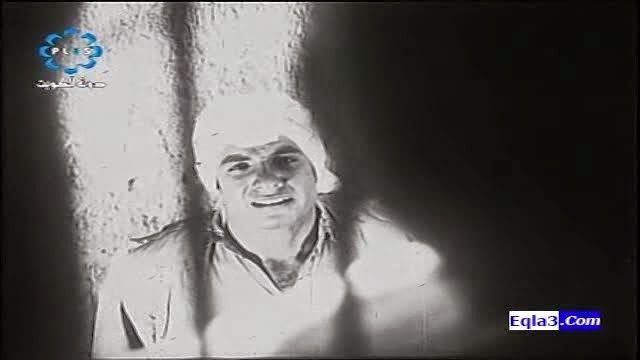 The Cruel Sea was the first feature film from Kuwait and major landmark in Arabic cinema. The production is technically rather rough, marred by injudicious zoom shots and ambitious but frequently confusing editing and lighting that confuse several scenes, but the sweaty, sickly claustrophobia of the diving boat and the misleading serenity of the underwater photography elevate the film’s latter half. Similarly, the narrative begins rather conventionally with a pair of thwarted lovers who’ve got very little spark and at one point loses momentum during Nora’s extended wedding scene, but the story has a timeless wisdom and sadness, not to mention a great deal of thematic interest, that build towards the final acts. 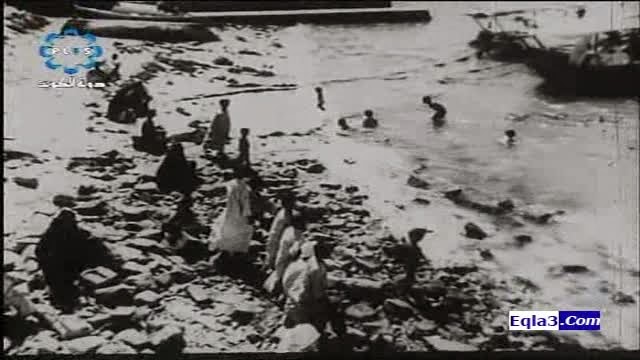 Family, tradition, masculinity and life at sea, while shown as essential to community life and as cornerstones of their value system, are undermined by self-interest, parochialism and unjustifiable risk. Even dreams, the thing that movies are made of, are revealed as siren songs. In an extended flashback Moussaed’s father pursues a phantom pearl to his own disaster, and later fails to avert his son, who refuses to obey him, from an even worse fate. Conversely, Nora’s father should have been disobeyed, but can’t be, and result is also tragedy. This false choice, where respecting parental authority versus paving one’s own way both lead to misfortune, echoes the movie’s more explicit theme of an ocean on which lives both depend and end. 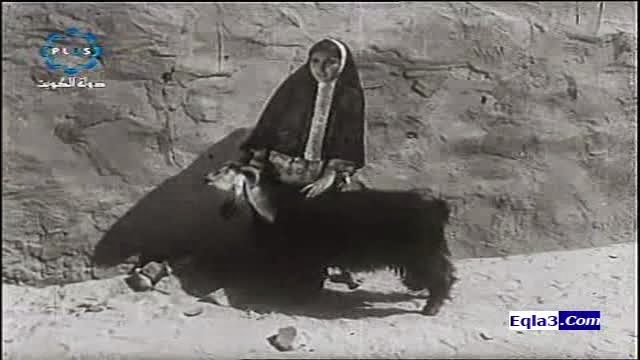 Posted by FilmWalrus at 10:30 AM No comments: 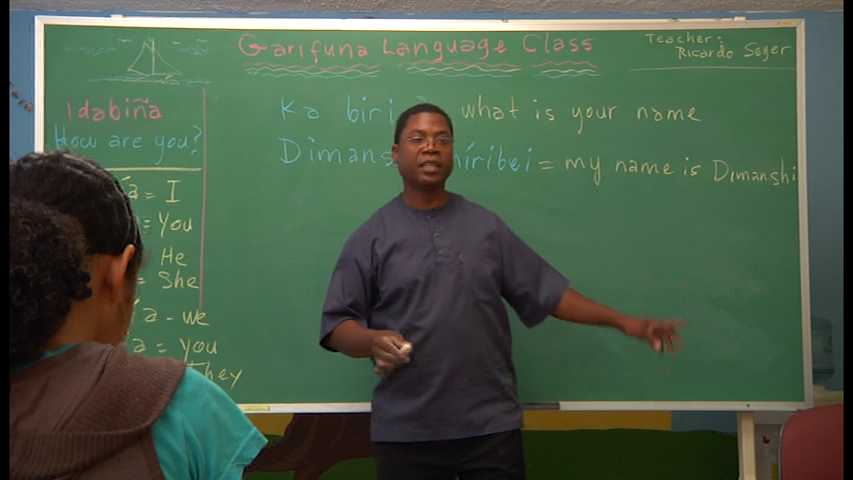 Country: Honduras
Title: Garifuna in Peril (2012)
Garifuna in Peril, despite its grassroots production, has a great deal of ambition, not only attempting to rescue an ethnic community and their fading language by telling their story of survival in both the historical past and the economically-shaky present, but also presenting a warm-hearted family saga with all the breadth and intimacy that entails. Ricardo is the foundation of an extended family that spans two countries. He lives in the US with his wife Becky, where he manages the business end of a Honduran company with his brother, Miguel, who conducts tours of their traditional Garifuna village. Together they are building an English-Spanish-Garifuna-language schoolhouse with the proceeds. 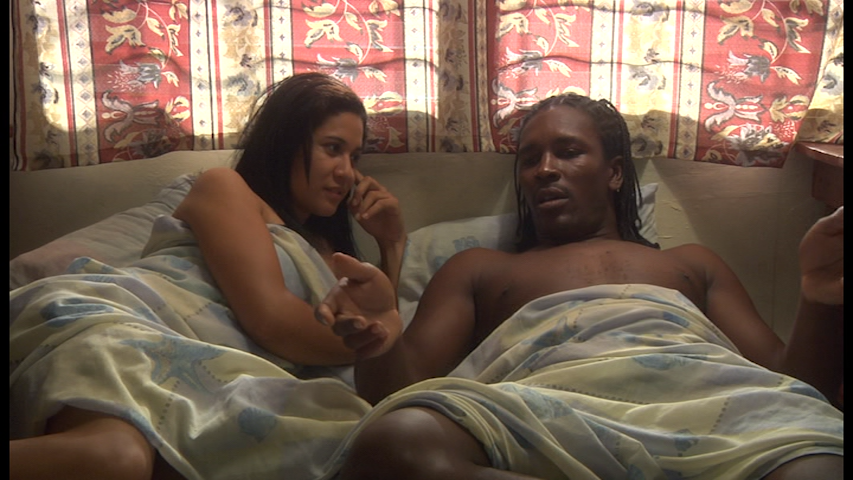 But Miguel befriends Pedro, a bus driver for a nearby luxury hotel, and falls in love with Pedro’s sister Vera, who makes him a more lucrative offer. Ricardo has to travel back to his homeland and clear up the mess. Meanwhile Ricardo’s daughter, Helena, deals with a much older boyfriend, Gabriel, who is dragging his feet about getting tested for HIV, and his oldest son Elijah, initially indifferent to his cultural heritage, stars in a play about the Garifuna people’s 17th century resistance to British colonialism and slavery on the island of St. Vincent. 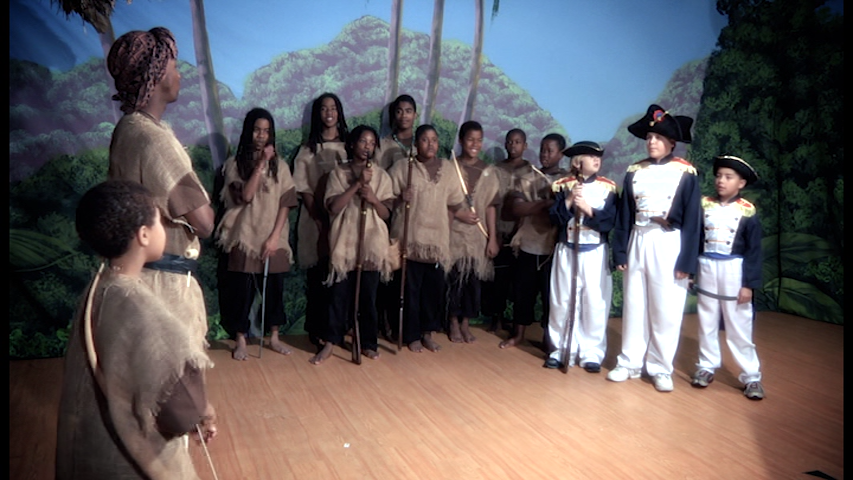 One of the keys to low-budget filmmaking is to play to your strengths. Car chases and CG are expensive, but good writing, though difficult to achieve, is cheap. Garifuna understands this, and succeeds by focusing on a strong script that captures the everyday realism of a unique pocket of Honduras and never cuts corners in terms of what it wants to tackle and how. Of course, not every subplot gets an in depth treatment, but even the ones brushed over (like Helena’s relationship or everything having to do with the youngest son, Jimmy) give us a greater sense of a living, breathing family. 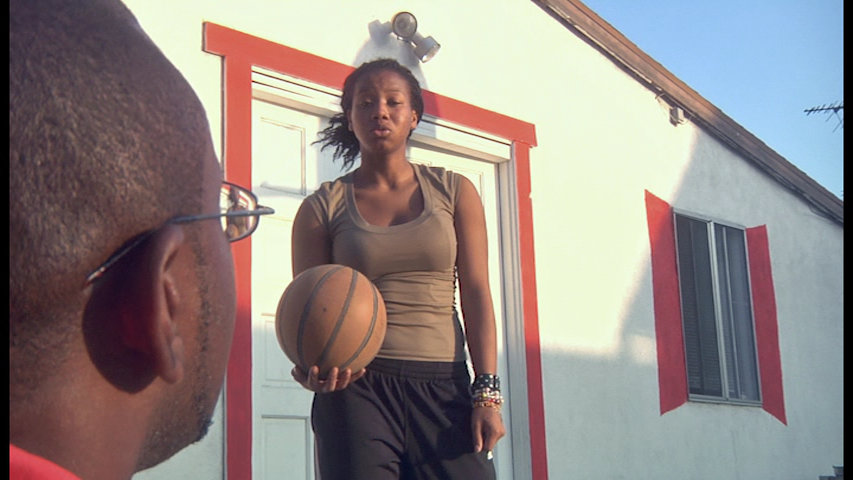 There are a lot of scenes that may look like soap opera, but don’t feel like it, largely because the writing is both fair and honest. For example, Miguel’s passion for Vera is understandable even as it leads him to make an obviously poor decision and I was impressed that the film resisted giving him a tearful reunion back into the family fold after realizing his mistake. Instead he gets tipsy, wrestles inarticulately with guilt and self-disgust and finally takes off never to be seen again; pretty harsh, but also pretty true to life. Another great example of naturalistic writing, painfully reminiscent of my own experiences, is a sort of town hall meeting in which miscommunication, blame apportioning, anger venting, lingering resentments and cross-cultural mistrust make it hard to get anything meaningful done, though that doesn’t stop a few optimists from trying.  I was also keen on the hotel owner’s climactic “villain speech,” which is actually reasonable, persuasive and open to some compromises, an almost unheard of rarity in stories about communities squaring off against large corporations. 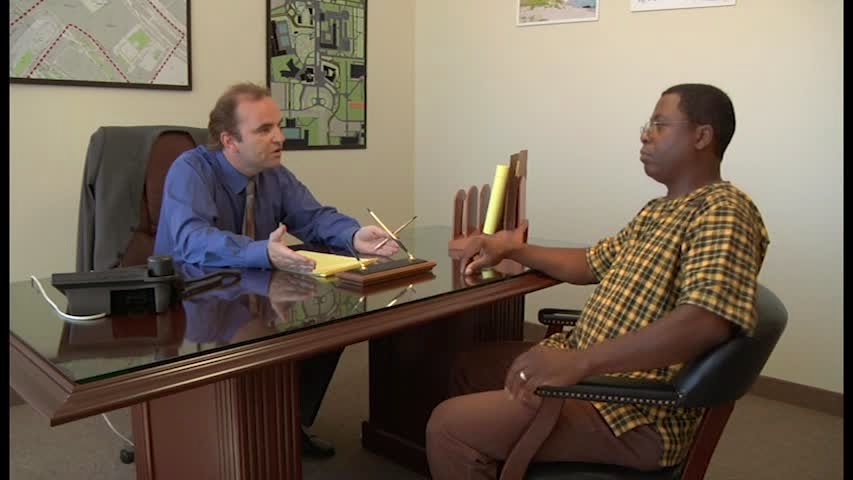 The acting and directing don’t quite live up to the same level as the writing. Ruban Reyes, who stars as Ricardo and co-directed, raises the level of every scene he’s in (and thankfully he’s onscreen a lot), but the rest of the cast feel like first-time actors, which isn’t surprising, because they are. Garifuna in Peril isn’t likely to generate a lot of buzz, but for those among the Garifuna diaspora or who take an interest in Central American cultures, they’ll be well satisfied by this film. This was the first Film Atlas title submitted by a reader (and it beat out the Honduran films I was able to track down on my own). If you know of or represent a great film from a country not yet on the Film Atlas, please let  know! I'd be happy to hear from you. 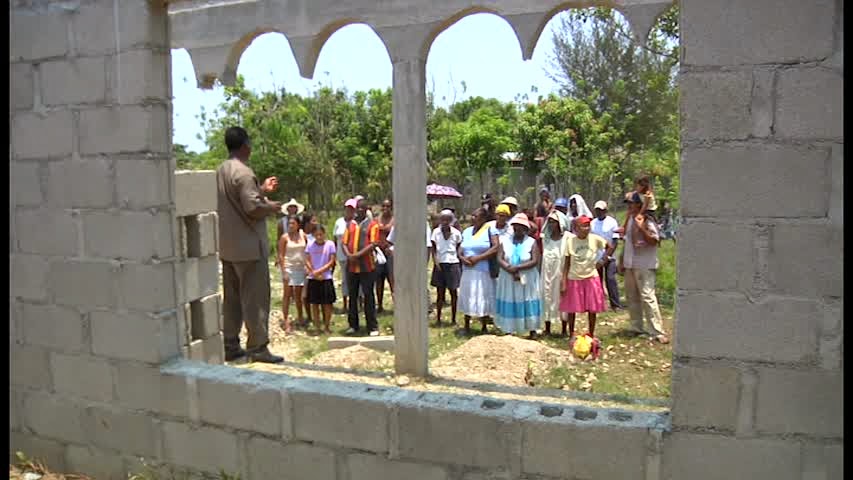 Posted by FilmWalrus at 11:53 AM No comments: