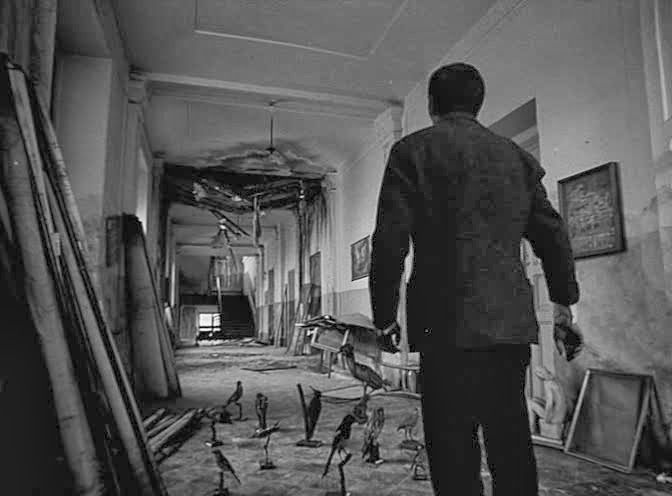 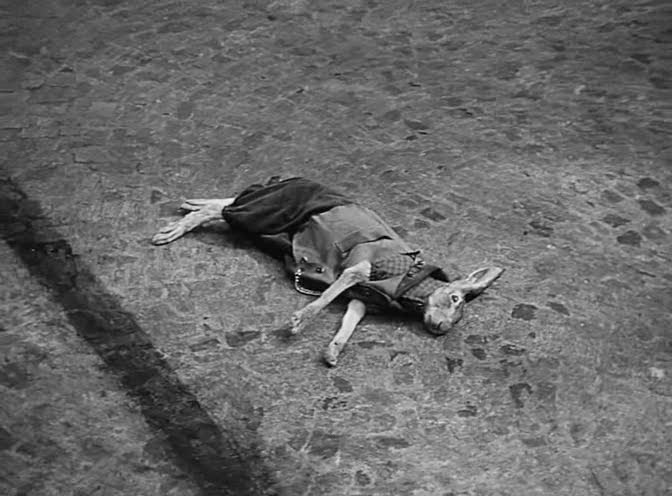 Lemuel Gulliver is standing before a roadblock. He takes an unpaved detour and finds himself lost in a tranquil forest while his car drives on without him. With a misleading sense of familiarity, he comes upon a solitary decaying house littered with forgotten emblems of his childhood and catches a glimpse of Marketa, his first love, who drowned twenty years earlier. Reality gives way under Lemuel’s feet, and, after being gunned down by mysterious intruders, he plunges into Balnibarbi through a door in the floor. There a professor holds up a flashcard reading “I’m sorry, but this is not a dream,” and an eerie silence prevails. Lemuel is arrested by the rather ludicrous Academy of Inventors for possession of a watch he purloined from the corpse of a well-dressed rabbit (the first of many Alice in Wonderland references) and the next day he is used as a case study for a college class on interrogation. Later he’s called before the childlike governor and learns that Balnibarbi is beset by the flying kingdom of Laputa, which blots out the sun for long periods. He meets a succession of rather unhelpful characters, joins a dubious band of poet rebels, witnesses a water riot at some sort of refugee camp and has other adventures, but primarily busies himself with chasing the elusive Marketa. Her real identity is in constant flux and it doesn’t help that as whenever he makes any romantic progress he wakes up in a bed, naked, with another woman entirely. 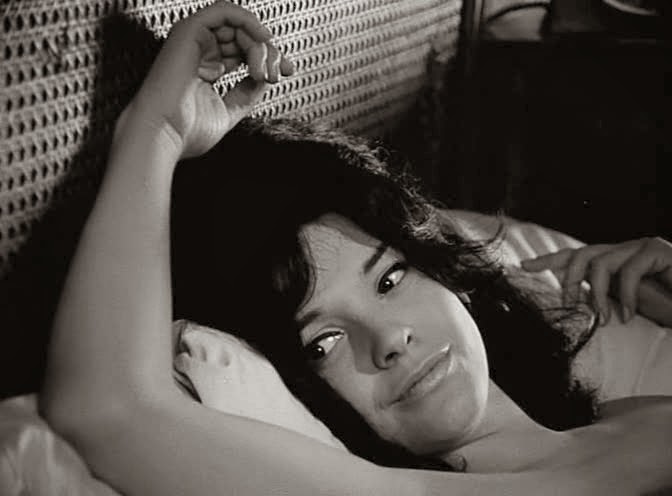 As things come to a head, Lemuel is led to a circus-sponsored execution contraption but is reprieved by a special invitation to Laputa. There he receives a cold welcome until the ministers learn that he once visited Monte Carlo. It soon becomes clear that their king, absent now for 11 years, works there as a hotel porter at the Carlton. The city and its hapless staff have drifted aimlessly since his departure. When Lemuel returns below, he finds that the Balnibarbians are unreceptive to the news that their god-like Laputian masters are actually unaware of them and indifferent to their plight. The governor and the rebels resort to violence. Lemuel flees. He reunites with the village idiot, encountered earlier, and they move on to the lands beyond the roadblock. Lemuel notes that the rabbit’s watch is now running backwards. “Be happy,” the idiot tells him, “that it’s still ticking.” 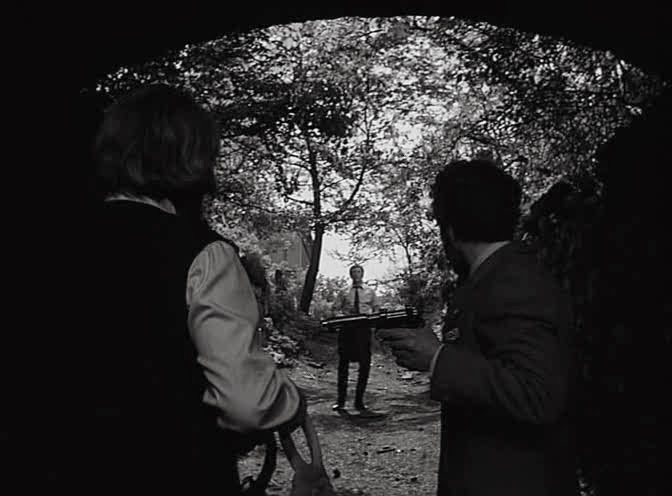 Case for a Rookie Hangman is an exercise in surrealist dreamlogic that, at first glance, may seem totally impenetrable. The film has an episodic structure potholed with disorienting ellipses and impossible geographic transitions that threaten to shake us loose, but director Pavel Juracek leaves just enough breadcrumbs to keep the viewer on track. Often, though, the film feels more connected by implications, echoes and symbols than by conventional narrative so your mileage, and interpretations, may vary. That said, even at its most confusing it’s still a highly satisfying film. The tone is kept predominantly light and entertaining by the fanciful cinematography, sporadic sex appeal and absurdist humor (scientists eliminate November to reduce flu epidemics, bureaucrats carefully shred a mural so that each fragment can be precisely cataloged, a nut-cracking statesman plays ‘the floor is lava’ on newspaper islands) while the accrual of indirect hints and satirical jabs (targeted at censorship and silence, bureaucracy and mismanagement, coercion and collaboration) allow a more serious political undertone to peek through, enough so that Juracek was banned from Czech cinema for life. 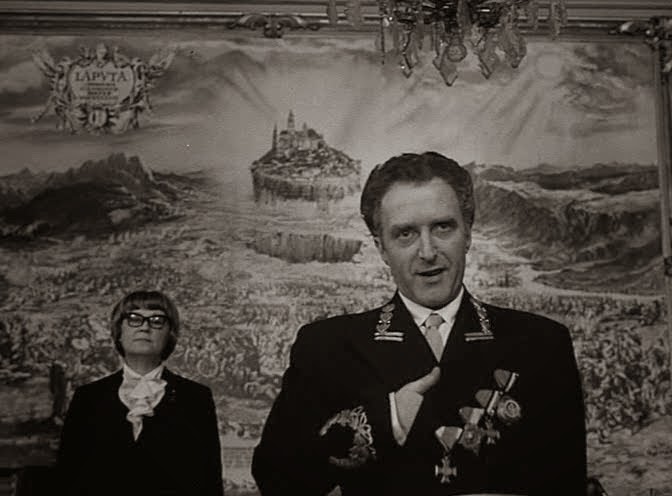 At the heart of the film’s fertile imagination and haunting imagery is Juracek’s talent for scouting out locations bound up in otherworldly enchantments and dressing baroque sets in dilapidation rife with lost history, but it wouldn’t have worked without cinematographer Jan Kalis’s unique combination of seductive nostalgia and noir menace. Case for a Rookie Hangman is a rare film, even within the context of the underappreciated Czech New Wave, but it has a unique, timeless brilliance. 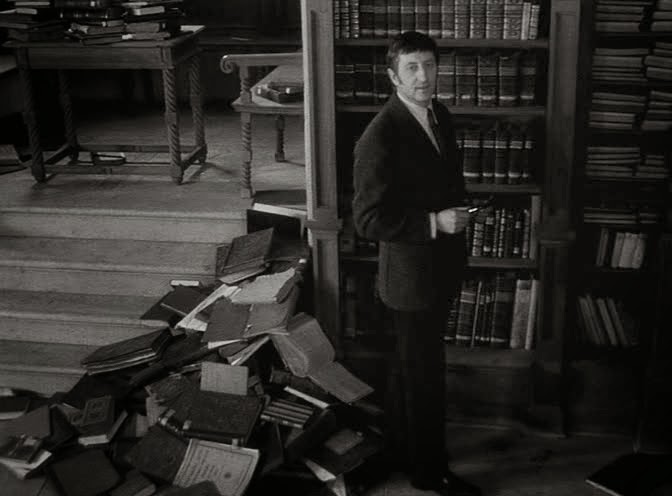 My Favorites:
The Cremator
The Ear
Marketa Lazarova
Baron Prasil
Who Wants to Kill Jesse?
Case for a Rookie Hangman
Diamonds of the Night
The Fifth Horseman Is Fear
Valerie and Her Week of Wonders
Carriage to Vienna
Alice (1988)
Valley of the Bees
Daisies
Happy End (1966)
The Devil's Trap
Krakatit
Ikarie XB-1
All My Good Countrymen
Lemonade Joe
Tomorrow I Will Wake Up and Scald Myself with Tea
Lunacy 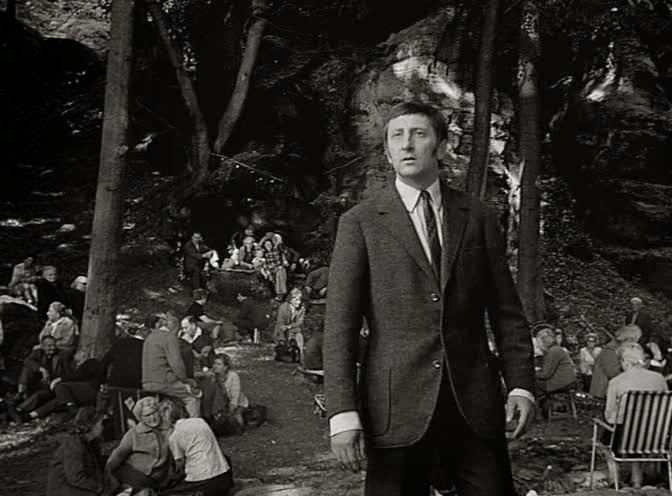 Is this your favorite Czech film, or just the best one you hadn't reviewed yet?

Just the best one I hadn't yet reviewed. When I am feeling less lazy, I'll make all the films in the "My Favorites" lists link to my reviews if I've written one.

Nice, that sounds like a good plan. At any rate, this one does sound like a winner.

I'm surprised i don't see Witchhammer, Closely Observed Trains, The Miraculous Virgin, A Blonde in Love, A Shop on the High Street, Fireman's Ball, or any of the Karel Zeman films in that long list.