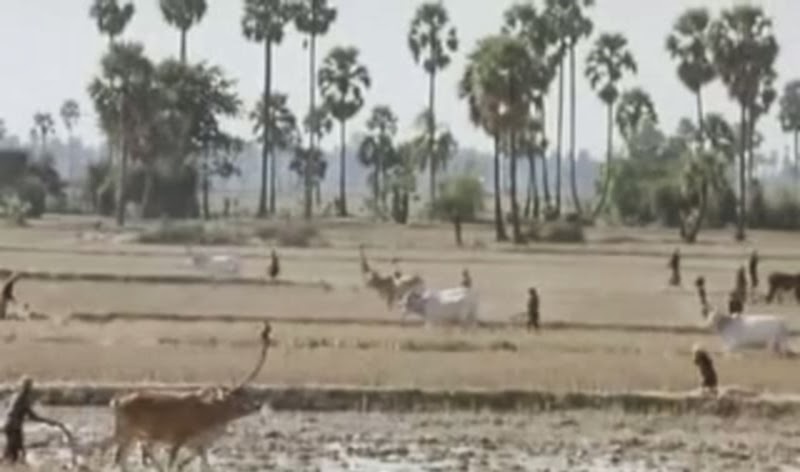 Country: Cambodia
Title: Rice People / Neak Sre (1994)
Poeuv, Om and their seven daughters are survivors of the Khmer Rouge who now raise rice on a 14 plot paddy. Poeuv fears he will leave little behind for his children and theirs, but he hopes to better his lot through hard work and diligence. His plans are immediately threatened when his wife, Om, is bitten by a snake. She lives and it is Poeuv who unexpectedly dies when a thorn in his foot becomes infected. Om is devastated but still has a family to feed and redoubles her work. During the day she is an implacable elemental force, part mother, boss and beast of labor, but at night we see her unraveling. She prays and rants at her late husband, sinks into bouts of drinking and depression and, hoping to ease her burden even at the price of her dignity, makes a fruitless bids for a second marriage. The responsibility and effort eventually drives her mad and her children confine her to a cage. The oldest, Sakha, shaves her head and assumes management of the family. Together they weather plagues of crabs, storms and sparrows. The rice grows. They reap, sift and sell what they can. It is a bad harvest and brings in little. The film ends with Sakha irrigating in preparation for the next year.

Rice People could be called the great film about subsistence farming, bringing home both the cruelty and complexity of nature and the backbreaking labor that living off the land entails. The performances, from what is virtually an all-female non-actor primary cast, are incredibly natural. The younger sisters are not particularly distinctive and they are easy to lose track of, but Om’s violent anguish, fear and tenacity and Sakha’s unflinching pragmatism, competence and maturity are captured with nuance and economy. For me, much of the appeal of Rice People is its respect for its subjects: not just the farmers, but the rice itself. Director Rithy Panh, best known for his documentaries, puts his factual rigor to fascinating use simply showing us the ins and outs of Cambodian agriculture: weaving thatch, punting through lilies, purging crab infestations and, of course, plowing, sowing, weeding, protecting, harvesting, sifting and cleaning rice. Panh lets the rice structure his film, establishing a steady rhythm and visual grace saturated with texture and toil and sun. Though it is slow and somber, it has a sense of poetry missing from more stylish works. Rice People is dedicated to Panh’s family who died of overwork and malnutrition during the Khmer Rouge regime.

Major Directors:
Rithy Panh
Posted by FilmWalrus at 10:30 AM