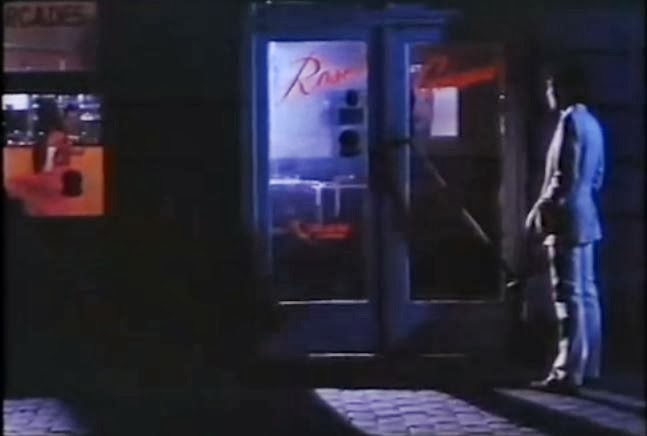 Country: Belgium
Film: All Night Long / Toute Une Nuit (1982)
All Night Long (also known as A Whole Night) is a very unusual film. It is a collection of events and non-events taking place during a single summer's night in Brussels; isolated fragments that sometimes tell us everything we need to know about a character (who will likely be on screen only once and only for a few minutes), but more often gives us only a sliver of their life, chosen perhaps at random. Lovers meet. Others part. Some miss their rendezvous completely. Couples embrace, dance, argue, pack suitcases, sit in silence. Lonely, anxious figures pace back and forth in bedrooms, warm stools in sleepy barrooms or strut down cobblestone streets and into darkness. Phones ring. TVs drone. Radios play. Depending on your mood there is either no story or dozens.

I first saw this film alone and late at night while suffering from insomnia. I can't think of better circumstances for it to work its magic. Few films so perfectly capture the essence of night; its sleepy rhythms and lonely mysteries. Experimental director Chantal Akerman isn't afraid of risking our boredom, but it's just as easy to be mesmerized. In All Night Long the darkness may be heavy and oppressive, but its citizens are restless. The camera is omnivorous: some scenes are dramatic climaxes of relationships piled high with untold baggage while others are just incidental moments, unimportant and quickly forgotten. They are all given equal weight.

I find my attention wandering during most Akerman films, and this is no exception, but here it feels as though that instinct is planned, welcomed, and even thematically integrated. The structure lets your curiosity wax and wane, allowing you to jump back in at any moment, free of confusion or guilt. Akerman's work is often labeled Minimalist or Structuralist (note the scary capital letters), and that aesthetic self-consciousness can be off-putting, but here it works as an advantage. We don’t get too close, too involved. We are simply nightwatchers, disinterested voyeurs. The absence of judgement, names or causality is peaceful. The sound design, perhaps the film’s strongest asset, gracefully assists, conjuring the nighttime's bare-boned staccato from clacking footsteps, humming fans, rolling thunder, purring engines, a door slamming shut a few blocks down. All Night Long is not for everyone, but if you can't sleep anyway, give it a chance.