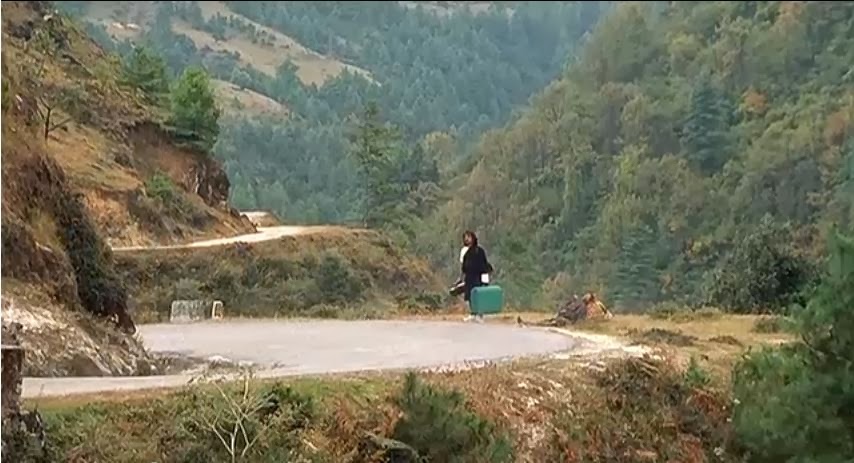 Country: Bhutan
Title: Travelers and Magicians (2003)
Travelers and Magicians is a road movie about Dondup, a teenage government clerk who feels stifled by rural life in the Himalayas and hitchhikes towards a festival in the capital, Thimphu, where he hopes to gain passage to America. Dondup is a rather comical character due to his unexamined admiration for Western culture: he wears tennis sneakers and a denim gho (the traditional Bhutanese robe), his room is littered with ads featuring sultry women (and an Uncle Sam Wants You poster) and he struts around his remote village blasting American rock music from his boom box. After missing the only bus out of town he ends up walking and begging rides, gradually accruing a disparate train of fellow travelers that includes a peasant, a drunk, a rice paper merchant, his pretty daughter Sonam and a lute-strumming Buddhist monk.

The monk befriends Dondup despite the latter’s best efforts and tells him a long-winded rabbit hole of a story while plucking his instrument to pass the time. In the tale, a wayward novitiate is whisked from his home by a storm, only to be rescued by an elderly woodsman and his much younger wife. The stir-crazy novitiate, in classical hospitality-violating style, begins an affair with the lusty wife. Their infidelity threatens to come to light, causing him to fear for his life.  The final effect of the story on Dondup, whose fledgling flirtation with Sonam might give him a reason call off his exodus, is left unclear. 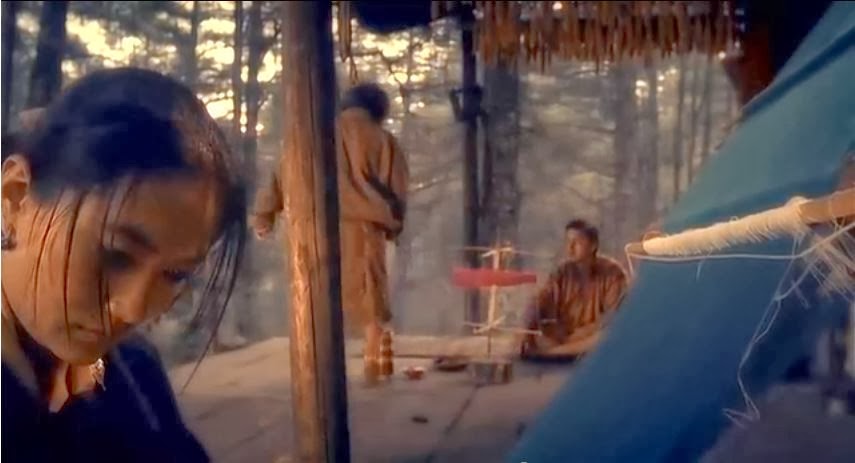 Director Khyentse Norbu, a Tibetan lama, offers up this lovely Buddhism-infused fable with a story-within-a-story-within-a-story structure. It’s a very relaxing experience, with a leisurely pace and gorgeous landscapes of mist-covered mountains and forested valleys. The nested story uses a variety of filters, colored lighting and occasional experiments with mattes and focal depth to create a dreamy, fantasy atmosphere that contrasts with the flatter sunlit realism of Dundup’s journey. The monk’s tale is obviously meant to reflect Dundup’s ambitions, but as it develops and darkens it transcends its allegorical purpose and works as a short story in its own right that I ended up liking even more than the frame story. Its relevance to Dundup gets a bit murky and the implied message is pretty harsh, but I didn’t feel like the film was preaching at me so much as preaching to its protagonist. Dundup listens, but I like that his response is ambiguous. Even though the filmmaker’s opinions are clear, Dundup, and by extension the audience, are allowed to make up their own mind. The film lets us consider whether its own philosophy doesn’t apply to everyone or, at least, whether everyone must make their own mistakes, and that’s deeper than I expected from a fable.
Posted by FilmWalrus at 10:30 AM

You are welcome to join it, no need for reservation, just say hello to guide! www.stockholmfreetour.com

I would surely give 10 on 10 for such incredible content. best carry on luggage 2018

Superb and extremely energizing site. Adoration to watch. Continue Rocking. i thought about this