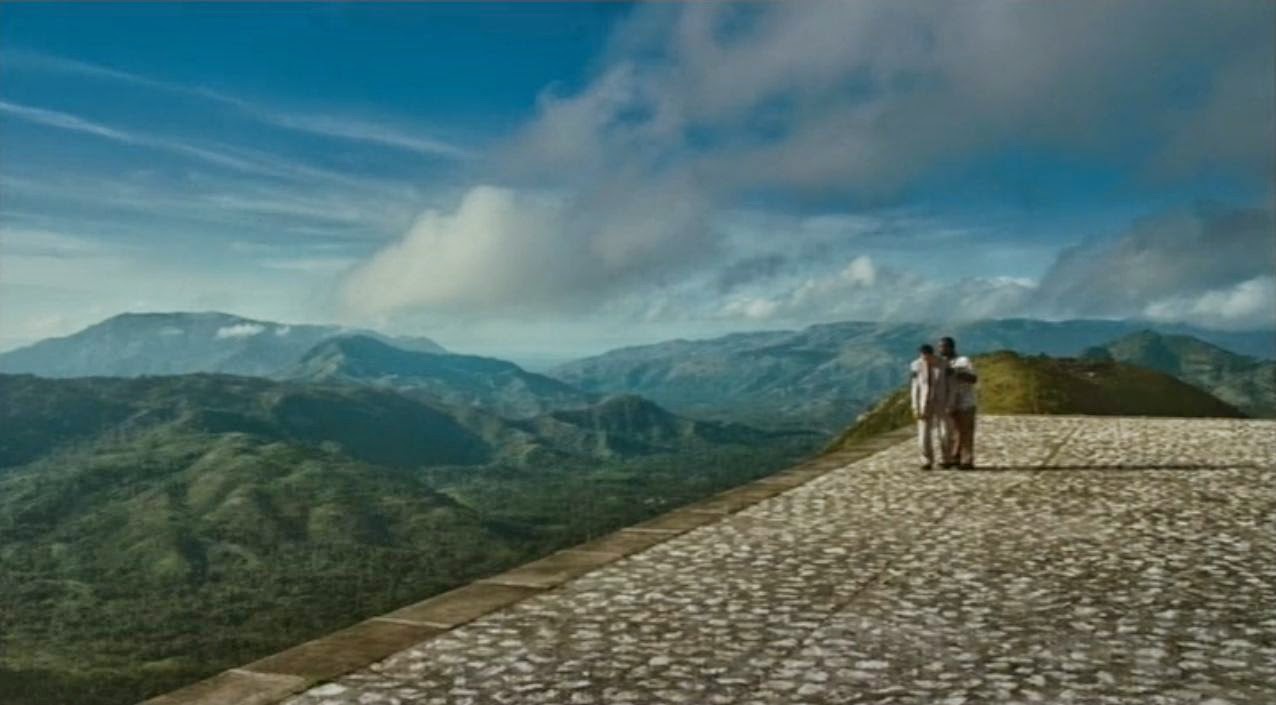 Country: Haiti
Title: Moloch Tropical (2009)
Moloch Tropical follows 24 hours in the life of fictional Haitian dictator Jean de Dieu Theogene (unbeknownst to him, they will be his last as president), while he prepares for a sumptuous Independence Day celebration at his palatial mountain fortress. Jean’s day gets off to an ill-omened start when he steps on a shard of glass during his austere, lonely morning ritual, sustaining a minor injury that will leave him limping the rest of the film. American celebrities arrive (predictably commenting, with vacuous sympathy, that it’s “such a beautiful country, but so poor.”) though, one by one, ambassadors from various countries back out and send their regrets. Jean, incensed, perceives these cancellations, particularly from his white ex-allies, as personal snubs that undermine his political legitimacy. He fails to realize the full seriousness of his situation, discernible on the televisions and radios around him, namely that a popular uprising is underway in the capital. 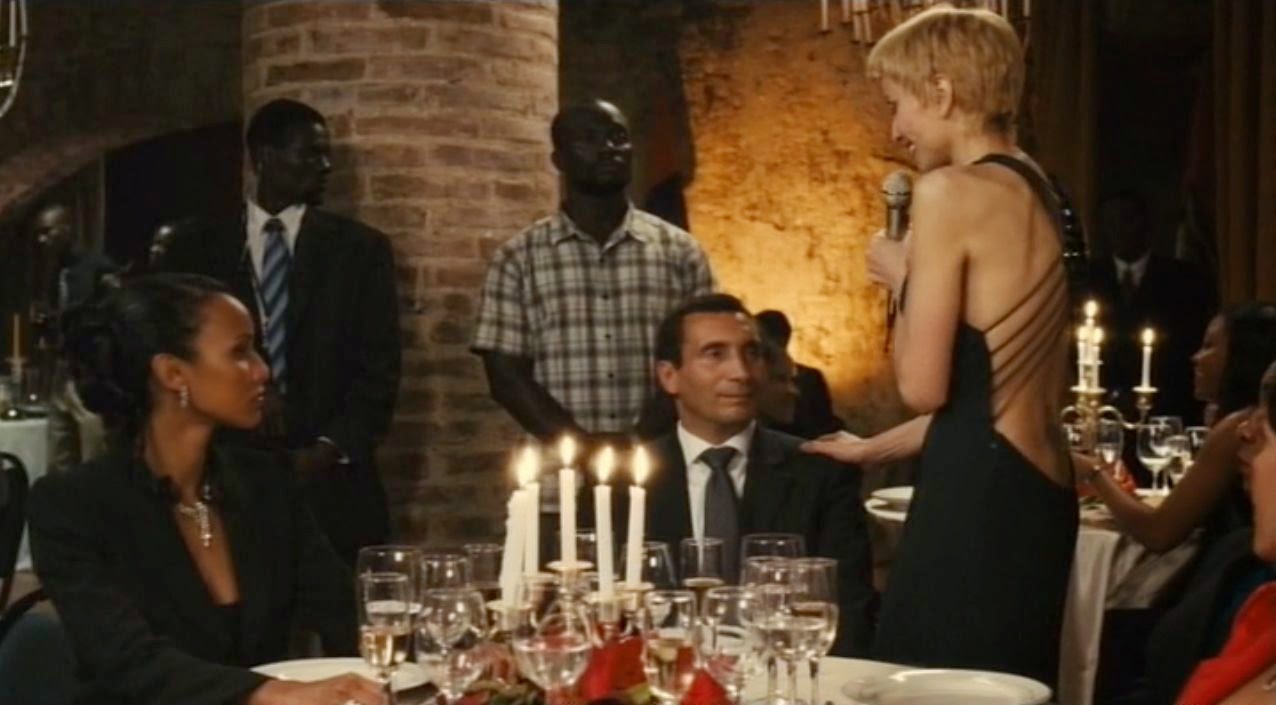 Michaelle, who despite her stunning good-looks is clearly a lot more than the trophy wife Jean signed up for, has seen the writing on the wall. A former American lawyer, her high-ranking connections have hinted that Washington plans to drop Jean and advises them to evacuate immediately along with their children. Michaelle has long since become estranged from her husband (not to mention objecting to his politics), but fears his violent rages. Jean gets his sexual gratification from various maids, a habit which is clearly well established by this point in their lives. His latest prey is, at least, savvy enough to demand he pay. She’s saving the money in the hope of escaping the country with her boyfriend, a dopey saxophonist who is, likewise, pressured into a sexual liaison with a high-ranking cabinet member. 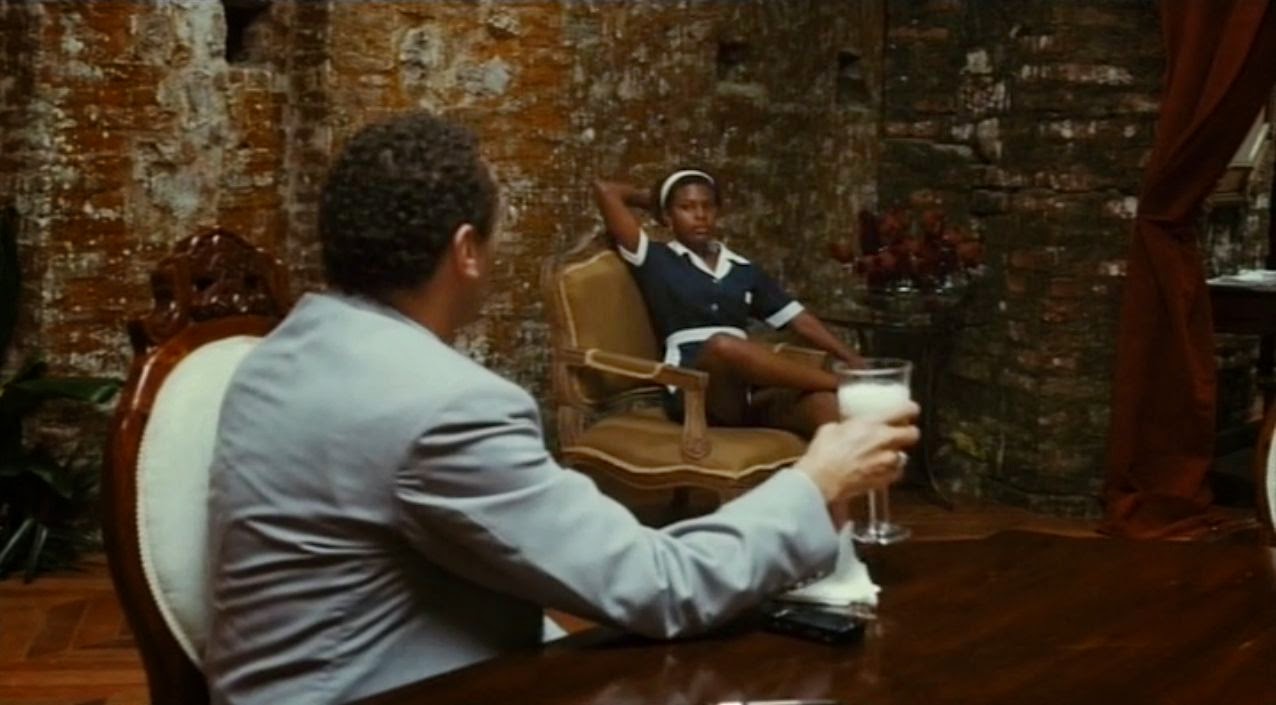 Jean surrounds himself with a conspicuous majority of women (the only two males being his most fawning yes-men), including the sadistic ‘Mother Theresa,’ general of a bloodthirsty paramilitary horde. It’s perhaps all part of Jean’s revealing conflation of sexual and political authority, his meticulously built defenses against his own insecurities; his fears of disempowerment and emasculation, of receiving hatred instead of the love he demands, of rejection by his people and peers. 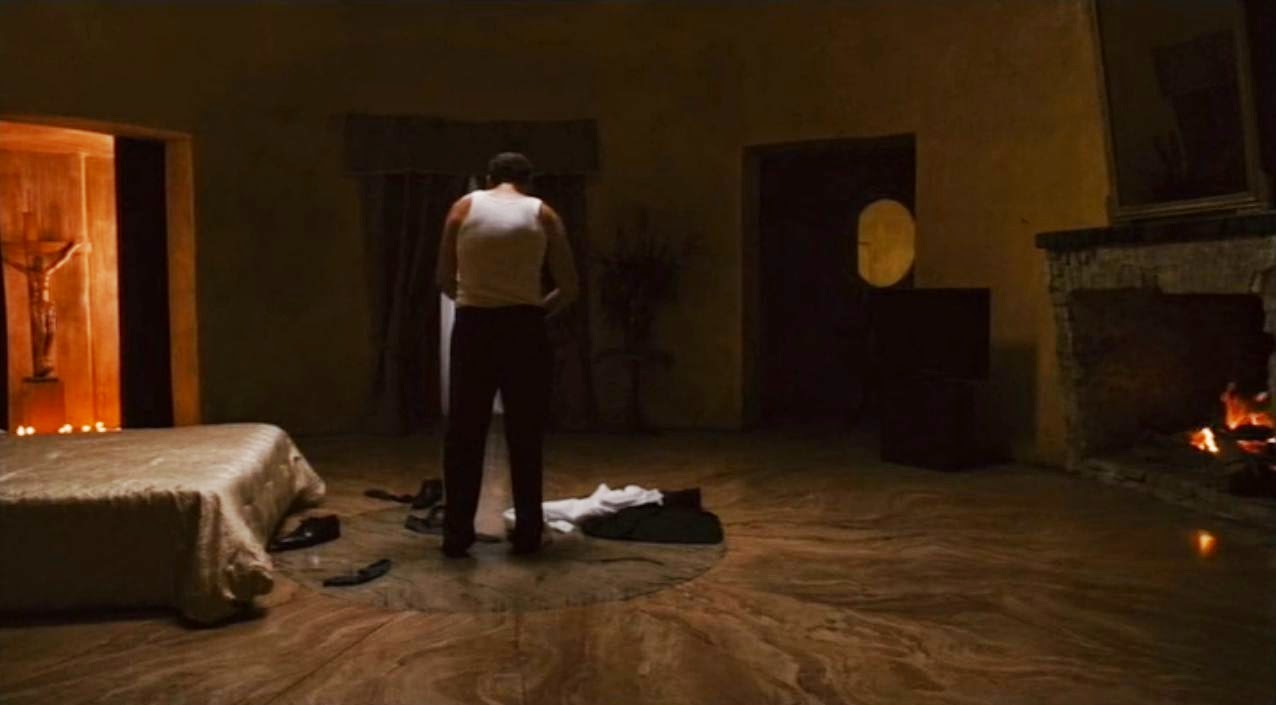 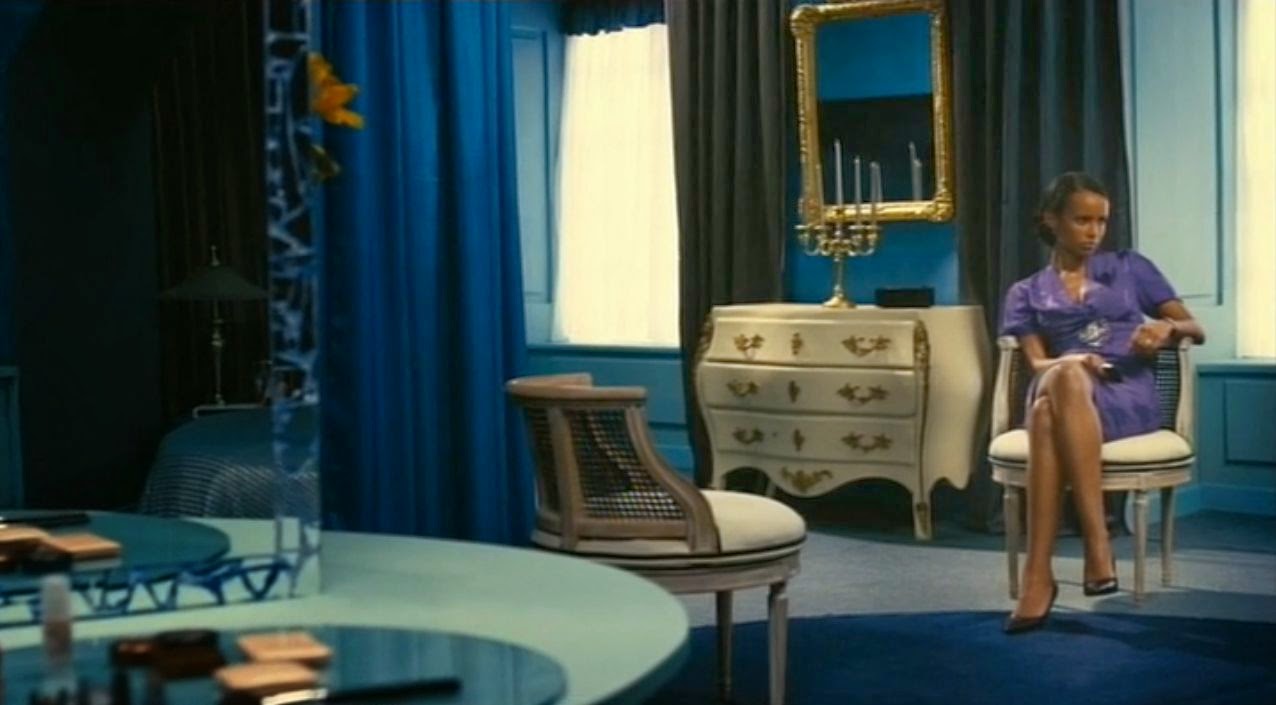 One grows to appreciate that Jean, beyond the crimes and compromises in which he only dimly recognizes his own responsibility, is also the victim of larger forces. He discusses his lapsed idealism, his disappointing term as president and his humiliation at being an American puppet with a recently captured and brutally tortured prisoner, a former comrade turned anti-regime radio host who, through pre-recorded broadcasts, is leading the revolution outside. Meanwhile Jean's mother, a peasant ignored by pretty much everyone, sits with the cynical kitchen staff and wonders what it all means. The next morning the CIA arrive and force Jean, who has stopped taking his medication and spent a surreal splenetic night scampering about his jungle castle in the nude, to sign a prepared resignation and pack up his family into exile. As he drives away he passes his maid hitchhiking and hears a single gunshot as his doggedly loyal bodyguard shoots himself. 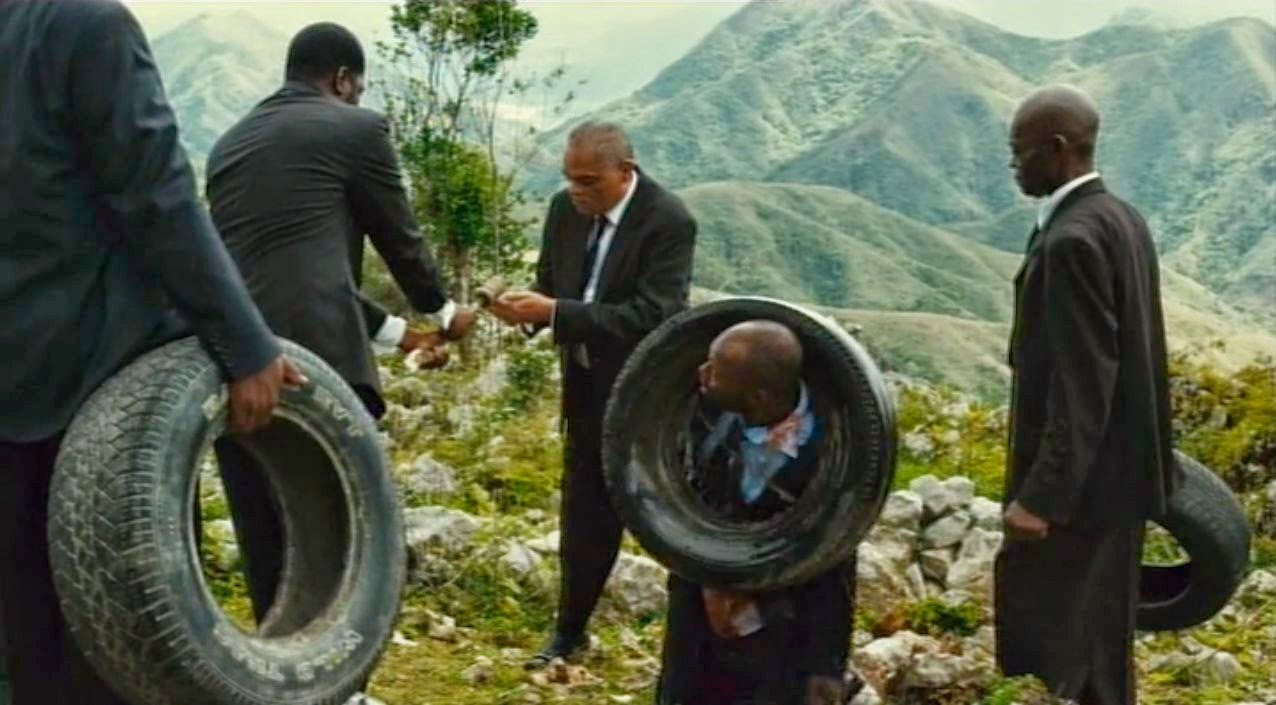 Moloch Tropical is a big, bold, thoroughly brilliant ensemble film led by veteran actor Zinedine Soualem as Jean and Sonia Rolland as Michaelle, both of whom deserve to be better known. The same could be said for director Raoul Peck, who’s been making tough take-no-prisoners political films in both his native Haiti (The Man by the Shore) and his adopted home in the Congo (Lumumba), but getting more-or-less ignored by Western audiences and critics. With his earlier films I think I understood why they hadn’t caught on. They were maybe a bit too earnest, literal, topical and geographically specific to reach international appeal. But with Moloch Tropical he has made his best work: a multi-layered multiple-perspective and yet economical deconstruction of power, corruption and collapse. The number of characters he juggles is impressive, and even more so that each actor turns in an excellent performance, makes larger-than-life figures psychologically accessible and contributes something new to say on a spectrum of complicated topics. 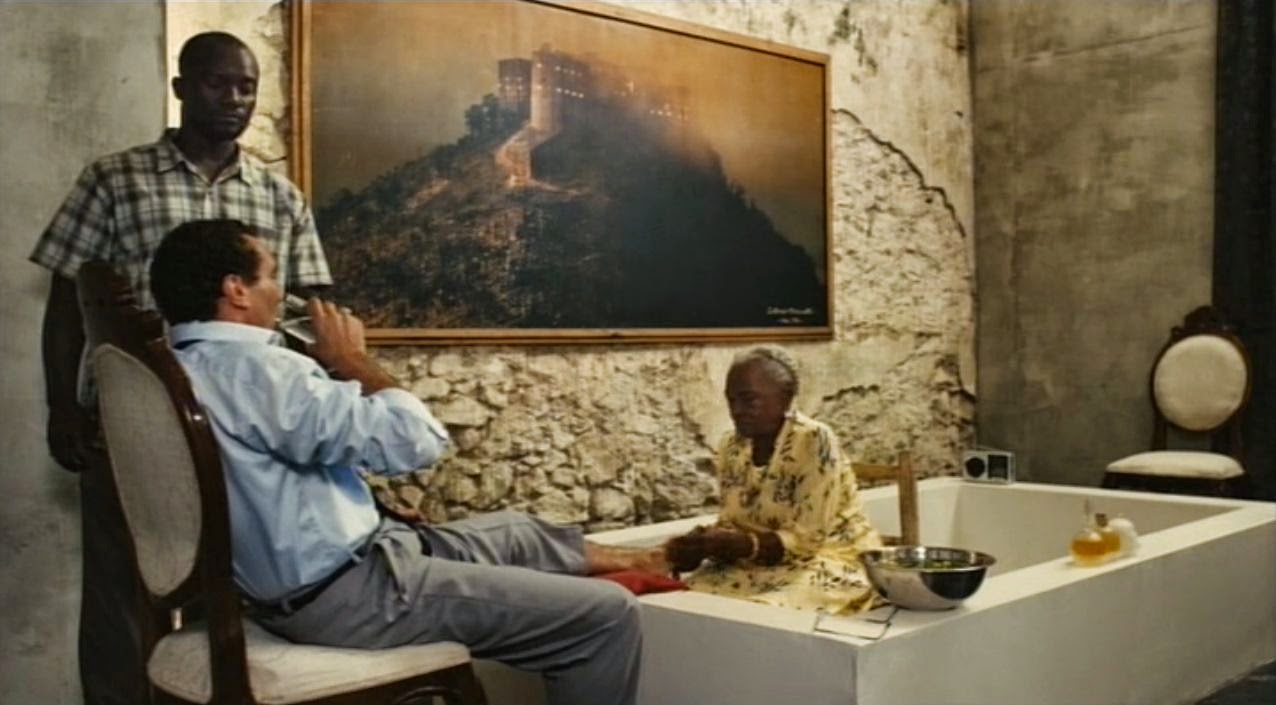 And yet there is also time for quiet character moments, too, where Jean, clearly an intelligent man despite his many faults, struggles with his conscience, his emotions, his longings, his speeches, his state duties, his broken family, his slipping sanity. A favorite moment is when Jean looks over his parapets at a corpse, a former friend turned critic, and almost falls before being saved from himself by a bodyguard. We never know whether he is truly suicidal, temporarily emotionally overcome, or just off-balance from stress, lack of sleep and his injured foot. We never know quite what ratio of sorrow, regret and guilt plague him. There are only these sad glimmers, visible through his official facade, that even he would welcome assassination. 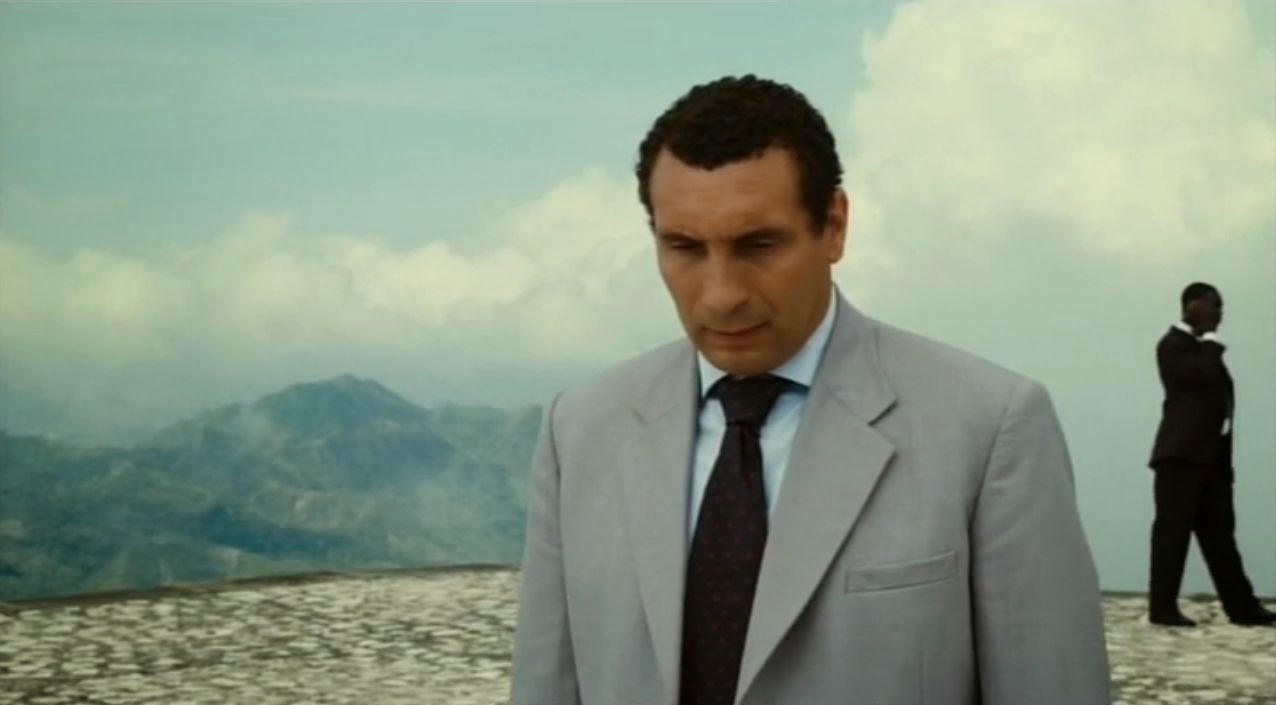 The title, in addition to its referencing the cruel Biblical monster-god of the Phoenicians, is also a nod to Russian director Alexander Sokurov’s totalitarian trilogy: Moloch, Taurus and The Sun about, respectively, Hitler, Lenin and Hirohito. Peck’s decision to extend this series to a Caribbean dictator (and Haiti has had its share, though the film’s most obvious targets are Jean-Bertrand Aristide and Jean-Claude Duvalier) is a stroke of both intertextual genius and an insightful, innovative way to modernize our understanding of authority, and those who wield it; abuse, and those who perpetrate it. 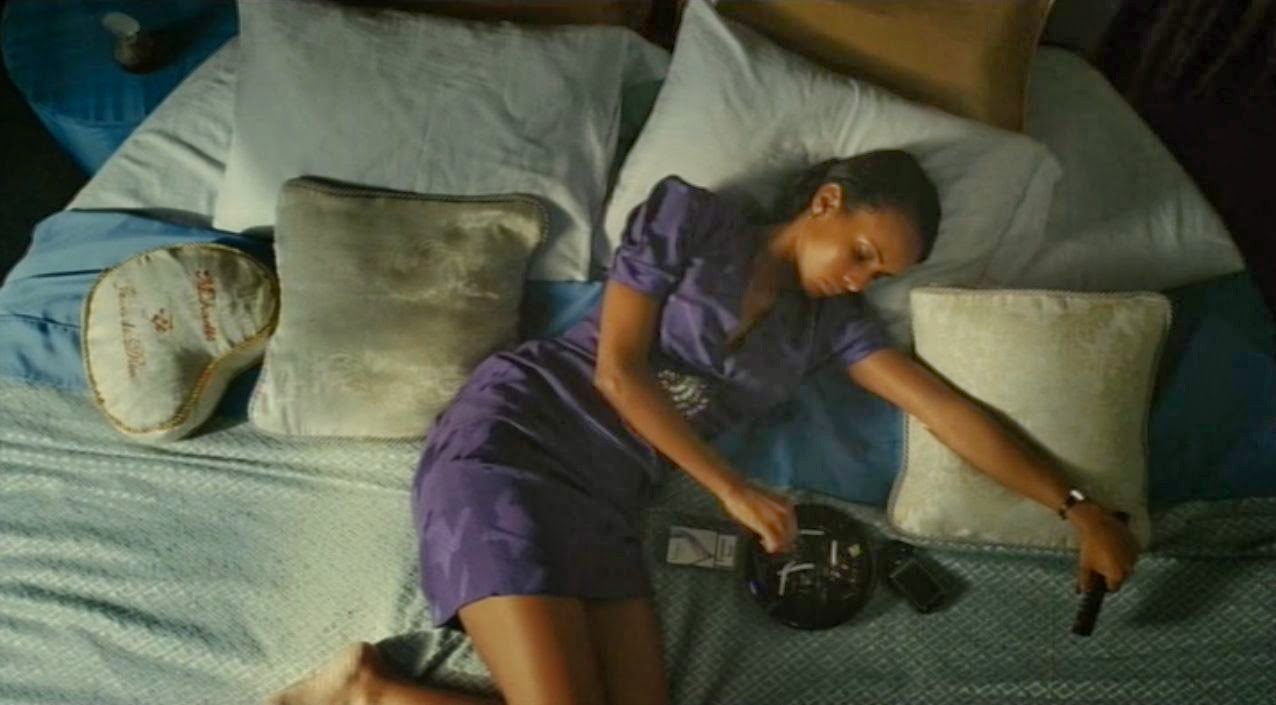