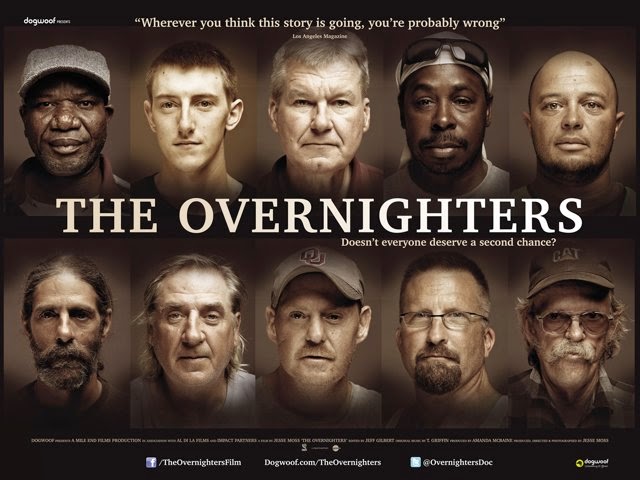 Title: The Overnighters
Country: US
Rating: 9.5
The best documentary I saw at the festival, or anywhere else this year, comes from a rather unlikely place: Williston, North Dakota. There thousands of diverse, desperate, often brave and frequently troubled men have descended from all over the world to make their fortunes, and very often risk their lives, in the booming gas and oil extraction industry.  But the small rather rigidly conservative community isn’t exactly pleased with the inbound hoards, an iterant population whose legacy is environmental degradation, escalating crime rates and an insuperable housing crisis.
But local pastor Jay Reinke takes pity on these strangers, inviting them to sleep in his church, eat at his table and find consolation in his ministry. He calls them the overnighters. So many flock to his building that they have to sleep in their cars in the parking lot. His church’s regular members are, unsurprisingly, overwhelming against his Christian charity and want nothing to do with these men, who they regard as trash at best and criminals at worst. In truth, many of them do have police records, but Reinke believes in giving them a second chance and points out that sinners are those who need saving most. When he finds out that an unregistered sex offender is staying in the church he realizes that he could lose his job, and makes the tough call to move the man into his own home (after a family meeting with his wife and daughters), rather than risk the bad press rebounding on the church itself.
The film also follows several of the men. Reinke’s ex-convict right-hand man who finds new purpose in administering the overnighters program. A young guy, the first to leave his home town, who is rapidly promoted to supervisor because of his hard work and reliability. A man who leave his wife and kid in Kentucky and builds his own house from scratch in preparation for their reunion. And many of the overnighters who, after years of neglect, suspicion and rejection, find comfort and understanding.
But it all crumbles to dust. There are few happy endings in Williston. This is a heartbreaking film, where you see the incredible possibilities of providing hope but also the rarely shown pain of taking it away. Reinke, reflecting in hindsight on his personal and vocational failings, ends by dubbing his overnighters ‘broken men’ and considering himself the most broken of all. I have rarely been so devastated as I was watching his good works come undone.
I will mention that I have a fleeting connection to Williston. I few years back I lived in Rock Springs, WY, for reasons associated with the natural gas boom, and pretty much hated my life. When the vagaries of the industry took me to Williston, I remember thinking that this was a place even worse off, and that’s saying something. Watching The Overnighters made me ashamed that my reaction to the misery and exploitation (both human and environmental) that I saw was so self-interested; I just wanted to leave, to get away. A man like Jay Reinke, even with all his not-inconsiderable flaws, tried to do a whole lot more.
Posted by FilmWalrus at 5:30 PM

In The Overnighters documentarist Jesse Moss found his story and pursued it with remarkable empathy, all in the best traditions of the genre.