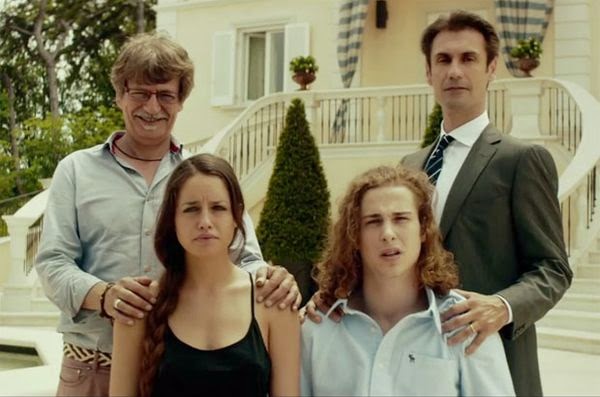 Title: Human Capital
Country: Italy
Score: 7
Like other great Italian works I could name, this one starts with two families: The Bernachis and the Ossolas. Giovanni Bernachi is an obscenely wealthy financial funds manager and his wife Carla is a former actress trying to rescue a historically important theater. Dino Ossola runs a small real estate business and is comfortably middle-class, but with upward aspirations. His wife is a school counselor. Their kids, Massimilano and Serena, are dating. Dino and Giovanni start to play tennis regularly. On the strength of their inchoate friendship, perhaps overstated, Dino asks if he can buy into Giovanni’s fund, but the move proves disastrous. Meanwhile Serena and valedictorian near-miss Massimiliano drift apart, and she finds herself more interested in one of her mother’s cases, student-artist and self-described f*ck-up Luca. Somewhere in the middle of all this is a dead cyclist, driven off the road by an SUV owned by the Bernachis. Identifying the driver is the name of the game.
The best thing about Human Capital is its Rashomon-style structure. We see the same time period through the eyes of first Dino, then Carla and finally Serena. The murder mystery element keeps the stakes high, but it is hardly necessary; the families themselves are such a tangled mess of personalities, psychoses and interactions that they hold our interest in their own right. Seeing their actions first and then learning their earlier motivations or later consequences is quite fun.
Unfortunately, the large cast of characters and the need to cover the same ground multiple times is a mixed blessing, and too many of the central players don’t have time to be fully developed. Their roles are a little too prescribed (the rich jerk husband, the bored housewife, the gauche social climber, the rebellious teen) to feel completely real.
Director Paolo Virzi ends his film on a strange note. On one hand he lets all his characters off the hook (which I have problems with) and on the other hand he gives us some white text on black background explaining what human capital means (which is way too heavy handed). I’m not sure the presumed theme, of how callous society has become when human lives and filthy lucre are weighed on the same scale, should have been the film’s marquee. This idea has been worked through in movies many times before and better. It’s especially sad because Human Capital has a much better theme going: the way we, rich or poor, get so caught up in our own problems that we remain blind to the problems of others.
Posted by FilmWalrus at 11:00 AM

I enjoyed this clever well made film. It makes you think about the things people do to appear important inn the eyes of the wealthy; this movie shows you why you should never try to act more important than you are.