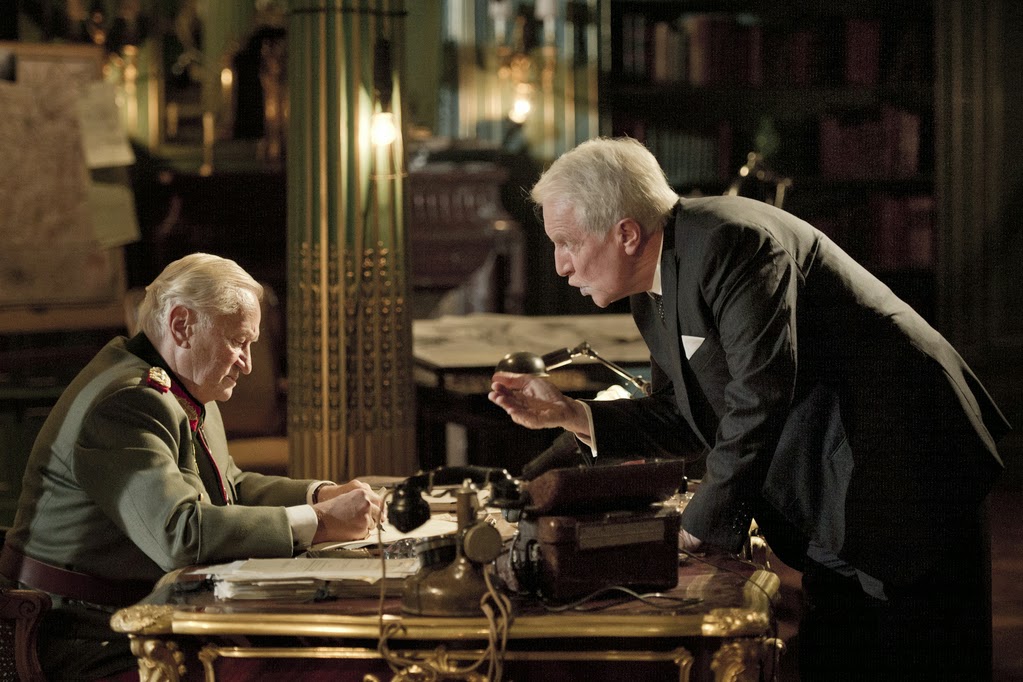 Title: Diplomacy
Country: France/Germany
Score: 5.5
August 24, 1944. Paris. Germany is losing the war. General Choltitz is planning to withdraw from the capitol. He has orders from Hitler to blow up the city’s great landmarks and grand bridges behind him, killing potentially a million or more in the resulting floods and leaving Paris’s cultural heritage in ruins. Raoul Nordling, the Swedish consul, overhears the plans and sneaks into Choltitz’s hotel room to talk him out of it. What results is a verbal game of cat and mouse that will run through the night and into the next day.
It a good setup, and the acting and much of the screenwriting work hard to do it justice. The art direction is strong, and the room where most of the film takes place is impeccably – one might even say too-impeccably – littered with historical artifacts. The problem is that the usually reliable director Volker Schlondorff falls into many of the pitfalls that so often plague both adaptations of history and of plays: he doesn’t have enough faith in the source material.
The verbal sparring is the heart of the film and the focal point of everything Diplomacy does right: high-stakes tension pitched softly low-key, thoughtful debate ranging from the value of posterity to the balance of duty and morality, and a character study of world-weary but far from soulless men. And yet, presumably wanting to ‘open things up’ from its one room setting, these scenes are interrupted by a B-plot in which a message must be delivered to the demolition team. They, of course, regardless of the final order, behave senselessly so that there can be a little action and violence for the denouement that is both thematically and structurally out of place.
Then too, the writing works much better as a showcase for the two central performances than as a truly deep think piece. In the first half of the film Choltitz’s appear to have only spurious unsatisfying motivations, hardly worth the defense he puts up. When he reveals in the second half that his family is being held hostage to enforce the order, it invalidates most of the previous argument (and one rather wonders why he didn’t bring it up first thing) and leads to a tedious debate about whether it is better to save your loved ones or faceless thousands. It’s a debate screenwriters love, but I do not.
Posted by FilmWalrus at 5:30 PM