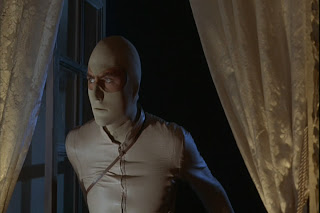 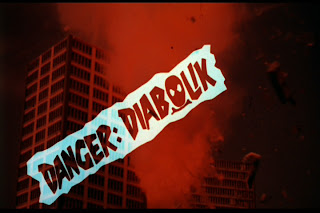 Mario Bava set the tone for all capers to come with his influential, Italian, low-tech hit “Danger: Diabolik” (1968). Diabolik (John Phillip Law) is the greatest criminal mastermind ever known, a super-sexy daredevil who “steals from the rich and gives to the girls” as one tagline announced. In heist after heist, he foils the cops and retreats with his vixen sidekick, Eva Kant, to his luxurious cave hideaway. 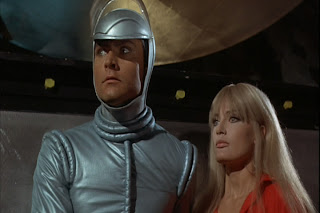 At the start of the film we see the elaborate procedures being carried out to transport a shipment of money from a high-security bank. It doesn’t take Diabolik long to burst in on the event and make fools of the police once again. However, this time the master thief has gone too far and both the cops (led by actor Michel Piccoli) and even the criminal underground are determined to capture the mysterious masked bandit. 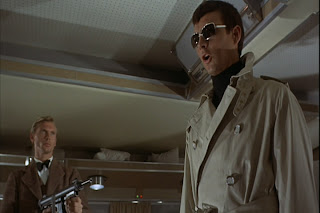 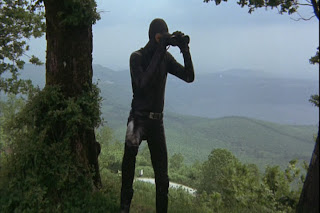 Packed with plots, couterplots and capers for lovers of heist films, Diabolik takes on ever-more dangerous missions. Steal the world’s most valuable emerald necklace? No problem. Bring the country’s tax infrastructure to its knees? Hardly a hiccup! In the grand finale Diabolik’s enemies melt the nation’s gold into an enormous multi-ton brick the size of a boxcar and encase it in inches of steel. Can Diabolik pull off the ultimate caper? 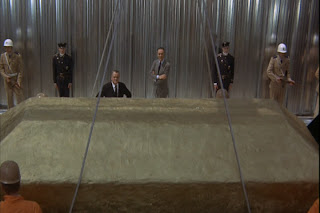 “Danger: Diabolik” has the trademark look of a Mario Bava film, replete with imaginative lighting, ridiculous furniture and costumes and brilliantly over-the-top sets. Diabolik and Eva drive matching black and white Jaguars and live (via a secret cave entrance) in a subterranean utopia of 60’s kitsch that includes a revolving bed covered in $50 bills. Diabolik wears his trademark skin-tight black bodysuit and sports an array of specialized gadgets that would put James Bond to shame. 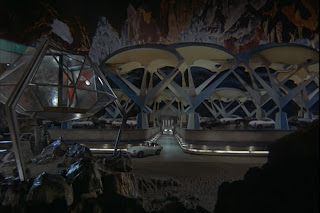 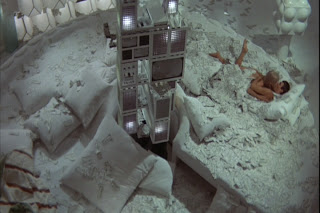 The score, by master composer Ennio Morricone, manages to be catchy and impossibly cheesy at the same time. Morricone puts his amusing personal stamp on the dated material, making for a memorable soundtrack that you'd be awfully embarrassed to hum out loud.
Diabolik was based on a popular Italian comic book character conceived of by the Giussani sisters. Bava translates the comic’s visual format by using various integrated frame-within-a-frame structures to divide up screen space. His innovative approach would go unrivaled until the hyper-gothic Tim Burton “Batman” movies and Rodriquez’s minimal-palette graphic novel style for “Sin City” (2005). 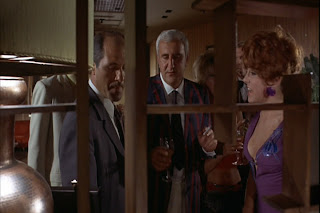 “Danger: Diabolik” was an instant cult hit that inspired everything from a Beastie Boys music video (“Body Movin’”) to the Austin Powers series (which never captured the genuine purity of spirit found here). Today, Bava is known as a grandmaster of horror films (he invented both the giallo and slasher subgenres), but his Diabolik adaptation remains a top contender for best 60’s kitsch extravaganza. 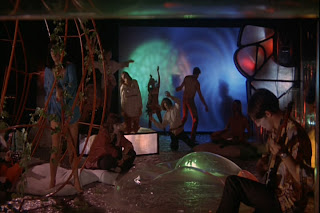 I've been enjoying the screenshots.

Speaking of Italian guys, I waltzed into Best Buy today to find an individual re-release of Deep Red's director's cut sitting on the shelf, complete with 5.1 soundtrack. For $11.99, I simply had to pick it up.

Ironic that you posted that today, just before I announced by Italian Horror series. I might have to buy another copy of Deep Red (my third) because my current versions are all loaned out and I really want to take screenshots. "Deep Red" is still my all-time favorite giallo.

No mention that this movie was the final episode of Mystery Science Theater 3000? =(