"Dead Alive" (1992) will be screened at Splice on Apr 21st at 2pm. Liggett Lower Basement will be used as usual, although we may relocate to Myers Lounge nearby (Myers is north of Bear's Den).

A full review of "Dead Alive" appears below.

[WARNING: the film and screenshots contain violent and gory content] 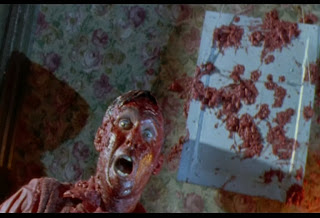 Many zombie movies are gory, but only one can claim to be the goriest zombie movie of all time. With 300+ liters of fake blood expended, “Dead Alive” holds the title. Made in 1992, “Dead Alive” (originally known as “Braindead”) was an early horror-comedy by New Zealand director Peter Jackson, now famous for his internationally successful “Lord of the Rings” series. With “Dead Alive,” (a financial failure upon its US release) Jackson shows the technical craft and visual flair that would serve him well on the more popular series. 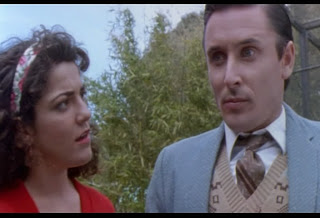 “Dead Alive” starts with the capture of a rare beast known as the Sumatran Rat-Monkey (eventually shown in all its stop-motion glory and given a back-story involving rats jumping off of sinking slave ships and raping the tree monkeys of the nearest isalnd), whose bite is legendarily deadly. Meanwhile, burgeoning lovers Lionel (Timothy Balme) and Paquita (Diana Penalver), are dealing with Lionel’s obsessive mother, who follow them around on dates. One day at the zoo she’s bitten by the crazed rat-monkey and soon begins to exhibit some very nasty results (Symptoms: eats dogs whole, globs of skin fall out, lusts for cerebellums. Diagnosis: zombie!). 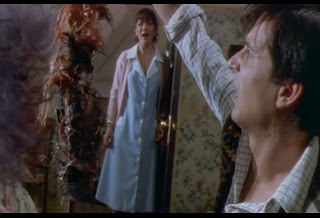 The first half of “Dead Alive” can be misleading, playing as a cartoonish romance with bumbling leads and little warning of the extremes ahead. Soon after the zombies start popping up, the film gets down to business and it becomes evident how much over-the-top gore is going to be spilled. It isn’t long before a party at Lionel’s place is crashed by zombies that convert the guests, and it’s up to the young lovers to fight off hoards of brain-loving beasts. 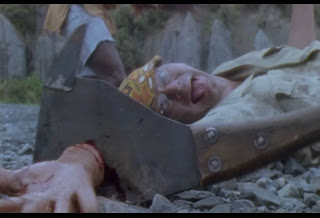 Peter Jackson directs much of the film in rather broad strokes without sacrificing a sense of timing and parody. Much of the humor comes from the knowing exploitation of film clichés (sound and music cues, Freudian trauma back-story, destined romance, stock characters filmed in the least complimentary way that dated fashions and wide-angle lenses can achieve, etc.) which can be quite fun although not particularly original. When mixed with the right dosage of gore and action the concoction yields the best results, such as a cemetery showdown with a kung-fu priest who “kicks as for the Lord” and carnage-amplified send-ups/references to “Psycho” (1960) and “Re-Animator” (1985). Those looking for a tightly weaved, original plot should look elsewhere, but if you want impish setups for amusingly morbid situations, there are plenty here.
Jackson’s editing velocity keeps things hustling and the action only accelerates. The real success of “Dead Alive” comes from the operatic zombie scenes, which have a level of creativity (not seen in the basic premise or form of the film) unmatched in the zombie horror genre. The rotting corpses are a parade of inspired horror: A headless zombie with a garden gnome in his neck stump! A zombie with a light bulb sticking through her mouth? A maniacal zombie baby that bursts through a human head? How about a pile of resurrected organs pleading with a pair of folded lungs for mercy? It doesn’t really have to make sense. 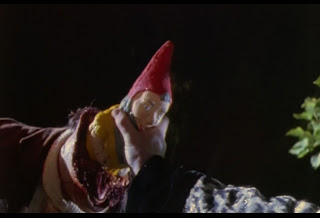 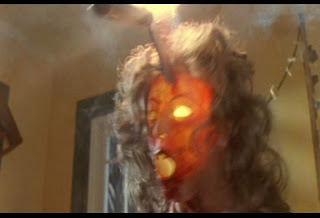 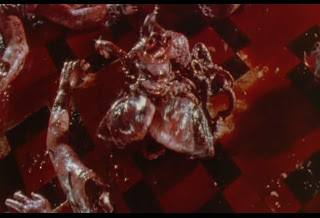 Particularly notable is the 20 minute finale that involves, amongst other things, a lawnmower and a blender being used as weapons. The gore and severed limbs begin to pile to disturbing heights and the blood-soaked characters have difficulty finding traction as they slice and dice their zombie foes. A must-see scene for horror fans with iron stomachs. 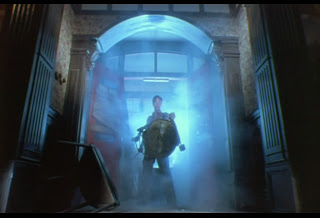 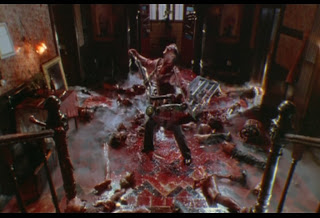 While not as impressive in the comedy side of things (still growing on me each time I watch the film), the humorous, non-realistic mood helps convey the fact that Jackson is having fun, and wants the audience to have fun too. He doesn’t shy away from grossing us out with an ear falling into someone’s pudding, but he shoots it with a benevolent wide-angle anxiety that lets us laugh at the most grisly situations. While shocking and likely to be quite upsetting in many ways (a shot of the zombie baby sitting in a blender comes to mind), one never senses that the director bears any antagonism towards his protagonists or audience. 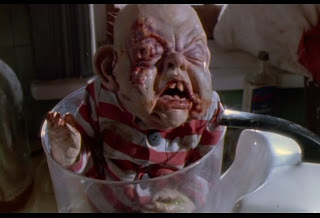 Posted by FilmWalrus at 6:39 PM

Readers should realize they can now score one point higher on the amazing Zombie Quiz (posted earlier).

Sounds like with the right crowd I'd love this movie. I was a huge fan of Planet Terror's gross-out stuff, and this looks kind of similar. Also... Paquita??