Review of The Killer Must Kill Again 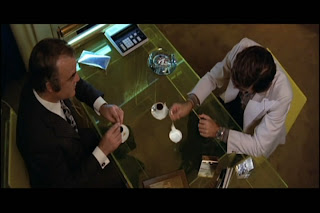 Given that Luigi Cozzi has a reputation as one of the world’s worst directors (see “Starcrash”), it was with pleasant surprise that “The Killer Must Kill Again” (1975) turned out to be so good. Granted, “good” is fairly relative, and viewers weaned exclusively on slick Hollywood thrillers will probably have trouble appreciating this low-budget, dated giallo. Nonetheless, Cozzi outdid himself by his own standards and creates an interesting and thoughtful little film that shows signs of a higher pedigree than the schlock he is more famous for.

Giorgio Mainardi (George Hilton) plays a greedy, scheming husband who has been looking around for a good way to knock off his rich wife given that she’s on to his philandering ways and about to deprive him of his cash flow. One night, while making a clandestine call to his mistress from a secluded phone booth, Giorgio espies a man (Antoine Saint-John) loading a corpse into a car and pushing it into a reservoir. Rather than report the incident, Giorgio makes his presence known and threatens to expose the nameless man unless he kills Giorgio’s wife. Thus the killer must kill again, not due to a psychotic compulsion, but to avoid blackmail. 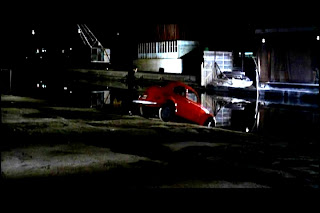 The killer successfully insinuates himself into the wife’s swanky art-deco home and strangles the woman to death. He loads the body into his car trunk under cover of night and returns inside to shut off the lights. When he comes out again the car is gone! A pair of joyriding young lovers (named Luca and Laura) have made off with the vehicle and are heading to an abandoned beach house for some hedonistic fun, completely oblivious to their corporal cargo. The killer hotwires a nearby car and gives pursuit.

Cozzi’s premise, while not a mystery, is compelling enough to kickstart the movie. Unfortunately the twenty minute car chase and the drawn out conclusion at the beach house hold far less narrative punch. Cozzi pours some low-budget tricks into the driving sequence to milk it for what he can, but there is only so much you can do with lens flare and fake-out scares. I was surprised to see a pair of camera iris shots, although whether I should read them as desperate filler or brilliant creativity, I’m not entirely sure. 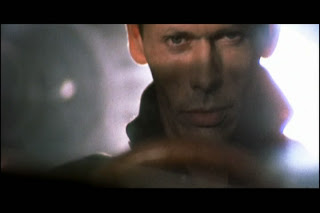 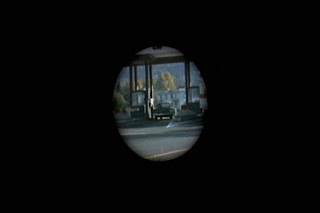 It tends to be Antoine Saint-John, as the icy cool, resourceful killer that carries the dry spells. Identified only by a lighter with the letters “D.A.” (a reference to Dario Argento), the killer steals the film out from under George Hilton (whom we initially presume to be the lead). Saint-John looks the part: an angular lanky man who exudes intelligence as much as creepy malevolence. We never find out his name or much about his past (nothing is said about the background of the murder that led to the first body dumping), but he occupies the majority of the screen-time and gives a believable performance. He speaks rarely, but when he does, he delivers quick-woven lies in an authoritative deadpan, creating a menacing snake quite capable of slithering his way in and out of any situation. 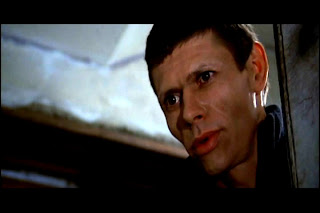 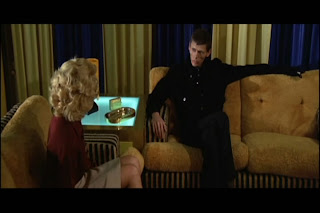 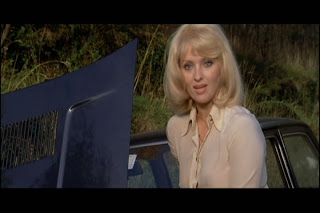 As this cameo suggests, one can feel the producer leaning on Cozzi’s shoulder to add as much sex into the film as possible. There is no question about the film’s core misogyny (every male is devoid of noble instincts and every woman is featured within a sexual context), yet Cozzi’s attention seems to be fixed elsewhere. He puts a great deal of attention into the camerawork and makes as many stabs at thematic weight as his characters do into flesh. 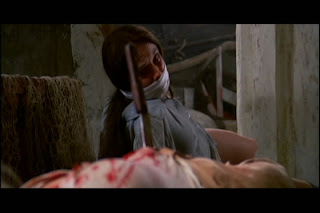 Even an uncomfortable dialogue between the husband and killer at an ice rink, that initially manages to make an elegant figure skating routine into a sleazy exercise in male gaze (the camera spends a suspicious amount of time on the legs and hips), is partially redeemed by Cozzi’s ingenuity. The sequence reveals an underlying friction between cold, upper-class, high-art aesthetics and the pleasures and thrills of uncultured, low-brow indulgence. The conflict is punctuated in the final shot of the sequence, where the camera slides gracefully backwards along the ice as the disembodied pair of skates gracefully weaves towards it. Is Cozzi asking us to admire the skater’s legs or footwork? Probably both. 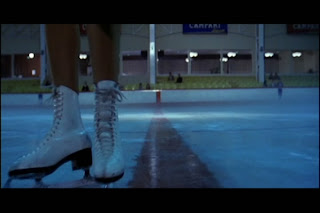 In fact, though the film contains three sex scenes (two of them wholly unnecessary), there’s a sense that Cozzi is more interested in finding a way of filming them artistically than luridly. The first uses a kaleidoscope lens and the second (never fully consummated) is shot in a single continuous (and disorientating) rotation shot. 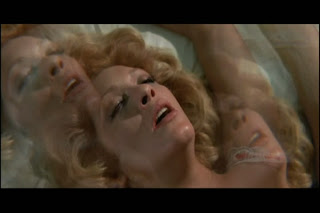 [Image: The kaleidoscope lens either amplifies the 70’s era ecstasy or hints at the fragmented marriage and forthcoming murder.] 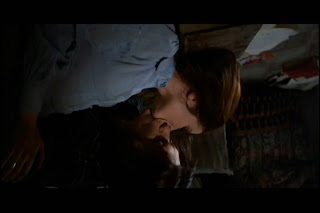 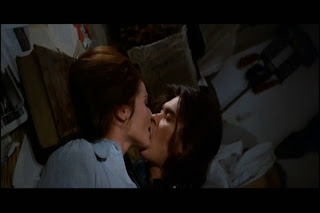 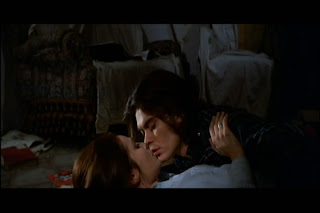 The final sex scene complicates the usual horror movie theme of “no sexual pleasure goes unpunished,” by intercutting the killer raping Laura in the rundown beach house and Luca having sex with the “dizzy blonde” in an idyllic little glen. Far from just being a mere psychedelic accompaniment (a possible reading of the first two cases), this technique creates the impression that we are seeing two sides of the same act: Luca’s perspective of sex as a pleasurable pastime without consequence and Laura’s perspective of sex as a momentous and even a fearful/traumatic experience. Unwilling to complete the act with each other, the two youths split up, only to be reunited and sexually consummated by Cozzi’s editing, only now polarized into absolute extremes. 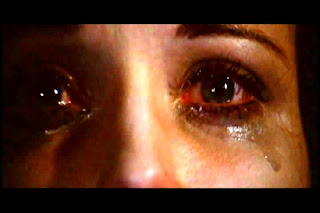 The intercutting also overtly situates all male “conquest” as aggressive acts. When Luca had earlier attempted to seduce Laura, she revealed that she was a virgin waiting for “someone special.” Cozzi’s cruel irony situates the killer as the special, albeit horrific, someone. The intercutting dissolves the line between Luca’s forceful pleading and the killer’s violent rape, implying the Luca is fundamentally as immoral as the killer. Here, as with the husband and wife, violent crime is linked directly with a sexual affair, not as a punishment for the transgressors, but as an extension from immorality to illegality. The fallout from the disturbing rape scene eventually emerges in typical 70’s horror film fashion with film-land justice more conventionally doled out.
Another noticeable comparison between the husband/wife and Luca/Laura pairings is the use of sets. The film is divided by location into three consecutive parts: Giorgio’s house, the car chase and the beach house. The first set is an amazing parody of ugly urban sterility parading as a trendy middle-upper-class apartment. Its yellow interior, vertical lights and hip furniture lacks any hospitality or humanity. 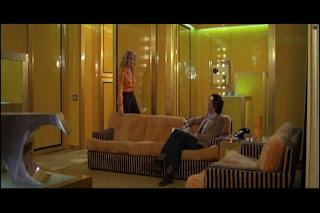 Best of all is the outrageous artwork. Stamped boldly with the name “lisa,” I can’t help but take this as a humorous reference to Leonardo da Vinci’s 16th century idealized beauty now made over for the consumption of over-stimulated 1970’s males (complete with blonde hair, bikini and gun). 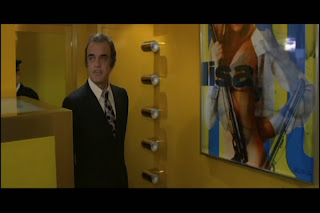 [Images: Art comparison of two very different Lisas.]
In comparison, the beach house is modest and decorated with aging sailing relics. The stone walls are crumbled in places and the wood is sagging and covered in grit. While Giorgio’s antiseptic display of wealth and “taste” turns out to be a breeding ground for corruption, the humble beach house provides a chance for revenge and redemption. Giorgio, Luca and the killer, as immoral male figures, all get their comeuppances in manners befitting their respective social classes, but only the pure-hearted lower-class Laura, of the three female characters, can transcend her victim role. 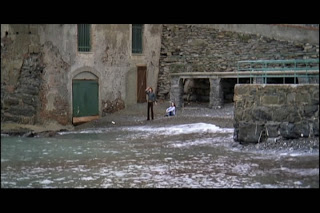 Perhaps I was just surprised to find things like class conflict and sexual politics in a Luigi Cozzi giallo, but I think “The Killer Must Kill Again” (1975) is a worthwhile film. The premise, Antoine Saint-John’s performance and the generally adept camerawork (the placement and framing are excellent, but the focus is often off and rarely crisp) come together nicely. The self-conscious interplay with horror film and giallo tropes, sometimes relying on the established system and sometimes breaking into new territory, helps seal the deal. As an added bonus, for which I offer no warranty, is the erratic, borderline-insane music that amused me several times.
Walrus Rating: 6.5
Posted by FilmWalrus at 1:21 AM

Oooh . . . Italian horror from the director of 'Die Robot!' Starcrash. For perhaps unwarranted reasons that sounds nearly impossible for me to resist.

I know how you feel. You get a lot of the Cozzi-style kitsch in a movie that has no right to be as good as it is. It's not nearly as fun as "Starcrash" but it's better written and shot.

I'm looking forward to seeing more Cozzi films like his infamous Hercules movie and his "Alien" ripoff "Contamination" which, once upon a time, made it onto Britain's "video nasty" list of banned movies.

I would totally see the Alien ripoff.

All I can think to say about the film is how perfect the "Killer" is. Oh, and the yellow house with the "Lisa" picture. YAY!