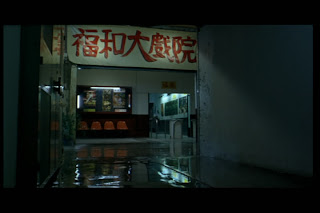 An enormous old theater screens one last martial arts film. A sparse crowd of drifters, has-beens and ghosts take in the flickering light in pools of isolated silence. A limping worker cleans the toilets and eats a piece of mysterious fruit. An awkward Japanese man wanders around the theater, oblivious to the film, and eventually fades from even the camera’s attention. After 80 minutes the lights go up, and the lonely figures return to the dusk and rain. 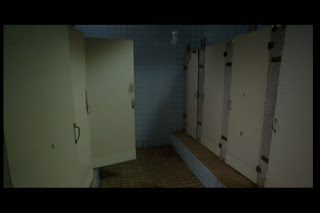 The paragraph above is a summary of Tsai Ming-Liang’s “Goodbye, Dragon Inn” (2003) written with more atmosphere, intrigue and efficiency than the director musters during his entire feature length film. In a quest for minimalist purity, Tsai whittles his dry, detached style so far down that almost nothing remains. The movie experience, as the world has come to know it, disappears. 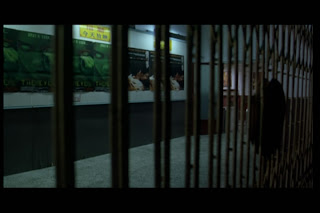 The extraction of almost all dialogue (there are two brief word exchanges akin to conversations), excessive use of “temps mort” (a camera shot that plays long before or long after any character appears in the shot) and static images held for minutes at a time, certainly drives home a sober, aching desire for something, anything, to happen. There is something vaguely artistic about this act. Some comment is made about the awesome power of the void, the nostalgic feeling of a distant memory now forgotten or the vacuous silence and alienation that modern life has unleashed. 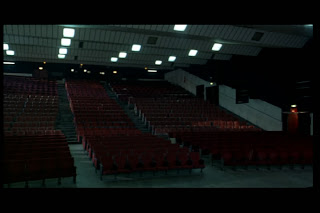 However, Tsai never offers a reason to care. I am generally a very tolerant movie watcher. I enjoy slow, meditative films by Jacques Tati, Yasujiro Ozu, Andrei Tarkovski, Theo Angelopoulos, Bela Tarr and even fellow Taiwanese New Wave director Hou Hsiao-Hsien. In fact, I’ve appreciated other Tsai Ming-Liang films too. But a film has to offer something. It has to offer atmosphere or depth or insight or emotion or technical prowess. In the silent conclusion to Michelangelo Antonioni's "The Eclipse" (1962) eloquent images of emptiness (the camera waits vigilantly at a rendezvous site for an affair in which both participants fail to show up) touch the audience deeply, as it comments on the absence of hope, the brevity of passion and restless encroachment of entropy on an arid middle class. More than 40 years later, Tsai has essentially nothing to add. 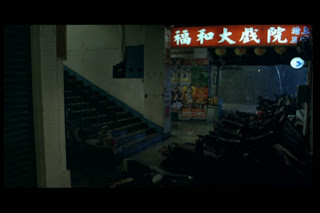 To be fair, “Goodbye, Dragon Inn” provides some nicely framed images, some moments that approach uncomfortable humor and a half-hearted punch-line/critique about the death of the theatrical mode and loss of audience interest (ironically reinforced by this film). It just isn’t enough. It’s like pieces of moldy bread crust offered to a film starved of progress, power and presence. It isn’t enough to satisfy, let alone fulfill in any narrative, artistic or spiritual hunger. The film the theater is playing, “Dragon Inn” (1968) is infinitely more interesting, and the few moments of excitement, emotion or pleasure come from seeing shots from it. 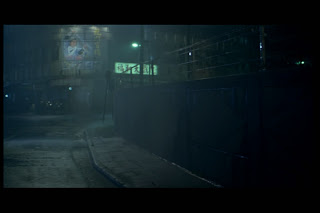 [Images: Usually directors put actors in front of the camera... but you don't have to.]
Some very patient critics found aspects of merit in the film, but it is tough for me to agree. I can only read “Goodbye, Dragon Inn” as a declaration by a nostalgic (not quite jaded) filmmaker who has declared cinema dead, and intends to go down with the ship. Tsai has subtracted from his film so musch as to leave only the traces (occasionally beautifully composed) of his own self-destruction (perhaps, evaporation is the better term). A keen eye may detect particles of meaning. What is missing is relevance.
Posted by FilmWalrus at 7:35 PM

Hey, yeah, where IS everyone? :p

It's like those live action shots at the end of the Eva movie where Anno lost his fucking mind.