Review of The Power of the Kangwon Province

Several months after watching Hong Sang-soo’s “Turning Gate” (2002) I find myself returning to try another one of his films. This time around, it’s “The Power of the Kangwon Province” (1998), Hong’s sophomore film. Much like his “Turning Gate” and “The Virgin Stripped Bare by Her Bachelors” (2000), the film is divided strictly into two halves and filmed in long, static takes with impeccable framing.

In the first half, Ji-sook and her two friends take a vacation from their schoolwork and the bustle of Seoul in the Kangwon Province. The girls meander through the pleasant region, offer prayers at a nearby temple and meet a friendly police officer. The next day they head up through some beautiful mountain trails and in the evening they get drunk. Several weeks after the vacation, Ji-sook returns for a date with the police officer. In the evening she gets drunk. In the morning she leaves. On the outbound train, she cries. 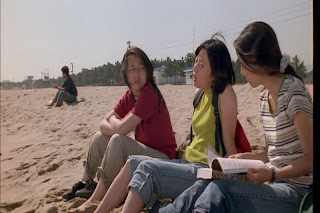 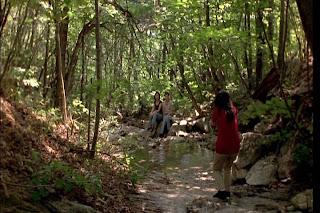 The second half begins without any obvious transition and focuses on Sang-kwon, a married professor who has recently ended an affair with a student and is currently drifting on low ambitions. His friend invites him on a vacation to the Kangwon Province and they enjoy the mountain hikes and grand views. Along the way Sang-kwon pursues a cultured young woman, but backs off after finding out that she’s married. Before returning home he spends the night with a prostitute and visits the local temple. Several weeks later he runs into his mistress and tries to reignite the affair, but she can’t have sex due to a difficult abortion. The couple parts once again and Sang-kwon returns to his office to stare at his lonely goldfish. Roll credits. 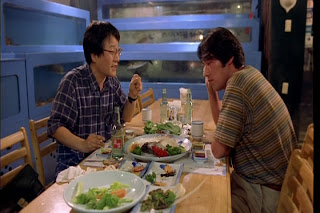 Outwardly, this plot summary sounds like a transcript of a pair of rather average, even boring, South Koreans over the course of several uneventful weeks. The downside (in the minds of most) to “The Power of the Kangwon Province” is that you are watching a film whose external-most layer is unremarkable realism. The upside is that woven into the apparently casual foreground is a background of almost mystical connections, coincidences and symbols.
Did I mention that Sang-kwon’s former mistress was Ji-sook? The film doesn’t state this until they meet again in the last ten minutes. So was Ji-sook pregnant with Sang-kwon’s child? No, it was the police officer’s, but Ji-sook never told him. That’s probably why she was crying as she left Kangwon, but we never find out for sure. The audience doesn’t even find out she’s pregnant until Sang-kwon does, also in the last ten minutes. Did I mention that Ji-sook and Sang-kwon were at Kangwon at the same time, but always just barely failed to encounter each other? Did I forget to bring up that the cultured woman Sang-kwon hit on was probably murdered off-screen? 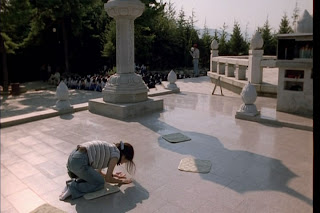 Much like “Turning Gate,” a lot of the seemingly minor or inconsequential details in the film form the bulk of its power and meaning. Hong Sang-soo’s narrative style will likely frustrate the inattentive and impatient, especially since there is no telling which of the subtle touches, the quotidian moments or the brief encounters with strangers will later be important. However, the film will cast a strangely effective trance over those who begin to mentally assemble the cosmic overtones and emotional undertones that hardly materialize on the screen itself.
The unanswered questions may carrry more ambiguity than most filmgoers can bear, but they are ultimately the most interesting aspects of the movie. Whether we are trying to solve a murder mystery only barely hinted at or attempting to figure out why Sang-kwon is so deeply unsatisfied with his life or contemplating what Hong’s purpose is in having the two separated lovers share a vacation without ever meeting, there is always some nuance to be puzzled over. 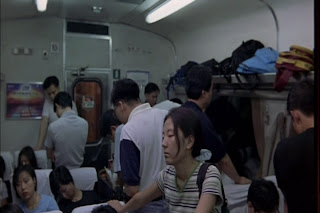 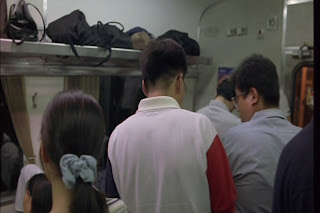 [Images: The openings shot (top) and one much later (bottom) showing that Ji-sook (the girl with the scrunchi) and Sang-kwon (his friend has the blue and red sleeves) took the same train to Kangwon.]
The film shows its low budget in its unadorned realist approach and naturalistic characters and environments. Hong works hard to keep his imagery interesting by choosing meticulous frames (many with beautiful asymmetries or distant backgrounds more interesting than the “relevant” foregrounds) within which to watch the minimal action. The editing is leisurely, and there are rarely any two shots that are immediately consecutive in time. Generally there is anywhere between a couple of minutes to a couple of weeks that disappear, almost incidentally, between the cuts. The effect forces the audience to realize that no matter how intimate the glimpses into the lives of the characters, we can never really know what goes on inside and around them. The hints, however, wet the appetite. 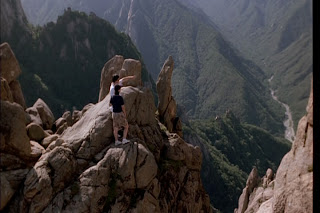 The strange similarities between the two halves could occupy an entire essay, but I’d prefer to withhold proposing any single explanation. There is no simple message about the universality of petty arguments, awkward meals and unfulfilled expectations nor is there any implication that the couple has some unique mysterious fate as inevitable lovers or unrequited dreamers. Perhaps my favorite connection is the image of a lone fish. Ji-sook finds one flopping around, far from water, on a mountain trail. With a pang of misplaced pity and distress she buries it alive. Sang-kwon, in the film’s melancholic final scene, returns to his office in a renewed bout of depression and stares at the only goldfish to survive his absence. 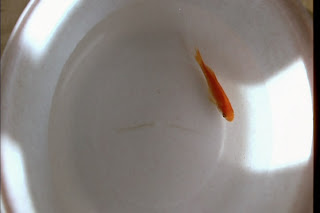 While I find Hong Sang-soo’s work to be important and interesting, I will say that he is a difficult director to get into. Even now that I have begun to steadily appreciate his work, I am irked by the redundancy and repetition in his style and themes. “The Power of the Kangwon Province” has all of Hong’s trademarks: the binary split, the easy-going pacing, the static long takes, the criss-crossing connections, the drunken emotional escapes, the uncomfortable sex scenes, the unglamorous alienation and the collapsing relationships. Hong is a distinct director, but his films are beginning to feel indistinct from each other.
Walrus Rating: 6.5 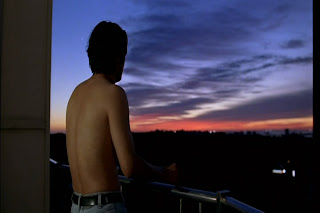 Posted by FilmWalrus at 9:53 PM