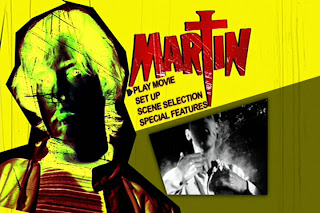 Is Martin just a troubled, emotionally stunted teenager or a blood-sucking monster? When we see him staring at a woman, is it with the frustration of adolescent longing or the hunger of a dangerous beast? Is Martin’s disturbing compulsion to kill motivated by a psychological imbalance or a mystical curse? Could Martin be… a vampire?

These are some of the questions asked in George A. Romero’s “Martin” (1978). Although better known for his “____ of the Dead” series, Romero always considered “Martin” his favorite work. The low-budget, humanitarian biography about a boy who may or may not be a vampire is certainly an overlooked gem. 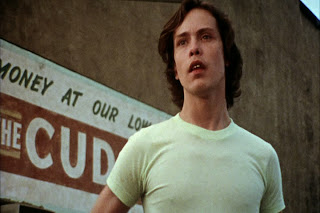 When we first join Martin (John Amplas), it’s on a train ride to Braddock, a suburb in Pittsburg. In the nearly dialogue-free opening, we see Martin attack a girl with a needle, attempting to soothe her as she falls asleep by saying that he’s “very careful with needles.” When she has passed out, he rapes her and then cuts open her wrists to drink her blood. Afterwards, he abandons the corpse. Given how terribly disturbing this sequence is it’s impressive that Martin still becomes such a sympathetic anti-hero. It’s also interesting that though the opening is grainy, confusing and poorly shot, the rest of the film ultimately comes together quite well. 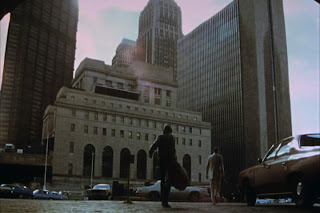 When Martin gets off the train, he’s met by his uncle Tada Cuda (Lincoln Maazel). Cuda brings Martin into his home, but says that he only plans to keep him there until his soul can be saved before destroying him. Cuda decries Martin as Nosferatu (the vampire of legend) and order him not to speak to his granddaughter, Christine. His most strict order is to seek no victims within the city, or else Cuda will destroy him without salvation. Immediately after the speech, the silent Martin chases Tada Cuda down the stairs, bypassing the garlic and crucifixes that Cuda has set up. With the audience expecting another violent outburst, Martin takes a bite from a garlic clove and rubs the crucifix over his face repeating, “I’m your cousin, Martin. There is no magic.” 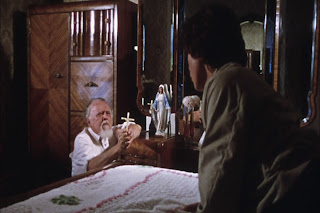 Flashbacks inform us that Martin has had issues in his past and his adjustment to the new town only makes life more difficult. He does deliveries for Tada Cuda’s humble grocery store and gradually becomes friendly with Christine and Abby Santini, a sexually-starved customer. Christine thinks that Martin should be in a mental hospital where he can receive proper care, but she knows that Tada Cuda is perhaps the craziest of all and she shares none of his mystic beliefs. As Martin’s life begins to change, he also becomes a regular caller known only as “the Count” on an all-night radio show. 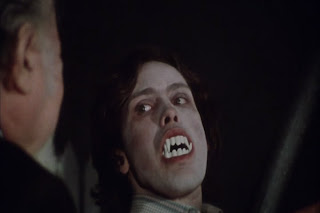 This was the first collaboration between Romero and special effects designer Tom Savini. The gore and sadism of the film is often played up in other reviews, but I feel that these elements are fairly extraneous and sort of miss the point. Besides, there are only a handful of scenes with any violence to speak of. The meat of “Martin” lies almost entirely in John Amplas’s superb performance and Romero’s polished minimal script, both of which bring Martin to life in an excruciatingly honest and deeply psychological fashion.

We never find out one way or another whether Martin is what his uncle believes him to be, but it hardly matters. Even if he is nothing but a misguided teen, after years of receiving only revulsion, fear and wrath from his closest family members and suffering from a compulsion for blood that alienates him from society, Martin himself has internalized the belief that he is a vampire. When he starts to call in to the late-night radio show (a plot device smartly introduced as a confessional narration before we realize it’s a real phone call), he tries to correct the popular misconceptions about being a vampire. The radio host clearly exploits Martin as a pitiable freak and it’s tough not to feel sorry for him as he describes his sexual anxieties (he can only do “the sexy stuff” with drugged victims) to the amusement of the host and listeners. 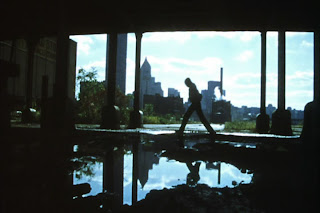 Romero is also wise enough not to get sentimental or preachy. Martin is a problematic character to say the least, and at many times his actions are cruel, unstable or criminal. One can easily understand why Martin would taunt and scare his uncle, given that Tada Cuda essentially forces him into the role of villain. However, when Martin breaks into a home and prepares a syringe to take another victim (a scene infinitely superior to the attack on the train), it is difficult to feel anything except horror. 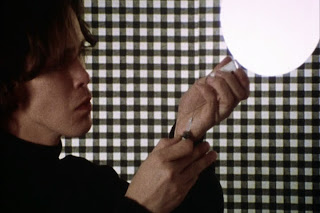 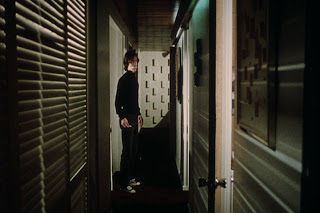 The film is shot on grainy 16mm and has the look and feel of any of the endless tide of 1970’s independent horror films. While many such low-budget films from this era fall very flat for me, even certain highly-regarded early films by Wes Craven and John Carpenter, “Martin” uses its gritty, documentary look as a chance to explore the realism and ordinariness of a rundown steel town and the harsh personal alienation of one its lonely denizens. Romero uses crisp B/W cinematography for the flashbacks, that lend a high-contrast tone of gothic legacy and German expression (reminiscent of the original “Nosferatu” (1921) and “Dracula” (1931) movies). It is tough to tell how much of these surreal flashbacks are real memories of past traumas or the imaginative dream-images of a constructed delusion. 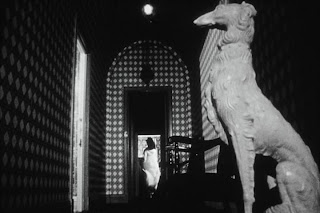 “Martin” succeeds as a deeply personal and stunningly heartfelt take on the vampire mythos. The inevitably tragic ending unfolds with rapid precision, blending Greek irony with Brechtian anti-climax. The credits play over an audio montage which capture the void left in Martin’s wake, an implication that the boy’s personal story may have universal appeal. 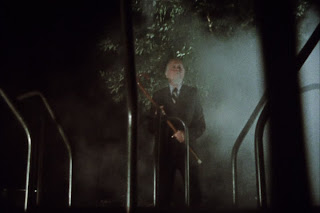 Posted by FilmWalrus at 1:31 AM

I'm crossing my fingers that this is better than most of his other movies. You swear it is, right?

I've never really considered myself a fan of Romero until seeing this film. I really thought "Dawn of the Dead" was completely overrated. I will warn that the low-budget, 16mm, 1970's look is still here (something which is often hard for me to get over), but I responded very positively to the subject and character (which I rarely do with this type of movie). I can't promise you you'll like it since my reaction was a subtle one and emotional/personal rather than aesthetic/technical, but I think it merits more attention than most of his other films.

I agree with Brian. I really couldn't get into Dawn of the Dead...even for the camp.

It's pretty cool to have a "vampire" face sort of practical problems (and not in the how-does-Blade-get-his-blood way). The interplay between him and the uncle is totally worth watching it.

I could somewhat get into Dawn of the Dead, but I totally agree that it's overrated. Especially when the bikers come in.

Did you know Soft Cell did a 10-minute song called "Martin" inspired by the movie? Well, they did. Meredith has it on vinyl.

As an interesting sidenote, I recently watched "Ganja and Hess," another unusual indie vampire film (a blaxploitation experimental vampire film at that) and found it mindnumbingly awful despite a sterling cult rep.

Why are there so many awful vampire movies and so few that are good?