Czech SF was featured in an Iceberg Arena comparison previously (“Ikarie XB-1” vs. “The End of August at the Hotel Ozone” vs. “Dinner for Adele”), but I can’t resist a rematch of sorts, this time with a specifically time-travel theme. Two of the directors return, Jindritch Polack (“Ikarie XB-1”) and Oldrich Lipsky (“Lemonade Joe,” “Dinner for Adele”) from the previous competition, and even the third auteur, Karl Zeman (“Baron Prasil”), is a Film Walrus alumni. Here are the contenders for this round:

The three films all involved travel back in time, though each focuses on very different destinations. They’re all pretty light-hearted affairs, if not outright comedies, quite different from the solemn, scientific, action-driven films that often mark the subgenre. I guess you could think of these as Czech precursors to “Back to the Future” or even “Bill and Ted’s Excellent Adventures.”

Journey to the Beginning of Time

“Journey to the Beginning of Time” is an edutainment adventure about four boys who find themselves on a river flowing backwards through time towards creation. The scale is in the millions of years and the starting point is the second ice age, so most of the film deals with prehistoric life such as dinosaurs. Doc, the oldest and most scientifically rigorous of the crew, takes notes and gives lengthy speeches describing each epoch’s flora and fauna.

The setup would seem ripe for rousing action, but the general format stays pretty stiff: one of the boys, usually the youngest, will get separated from the group and the others will look for him, often ending with a quick dash to the boat with a carnivorous animal in pursuit. The chipper lads aren’t confused or even frightened by their journey (they frequently mention that “they can always find their way back”), demonstrating a gung-ho uniformity that makes them seem a bit like Boy Scout caricatures.

These faults with the plot and characters certainly won’t bother youngsters, clearly the intended audience of the film. And they’ll be absolutely fascinated by the stop-motion work and set design, the real heroes of “Journey.” As usual, Zeman pulls out every trick in his hat, using stop motion models, clay, puppets, monster suits, full-size props, forced perspective, mattes and painted backdrops to make immaculate replicas of bygone eras on a relatively small budget. His creatures look impressively real for 1955, a product of the crew’s diligent research and attention to detail, but what makes them really come to life is the way they move and sound.

Karl Zeman had been working in the industry for more then a decade, producing innovative shorts like the delicate glassmation “Inspiration” (1949), before making his debut feature film. “Journey to the Beginning of Time” established Zeman as a major stop-motion and effects giant, although it didn’t land on American shores until nine years later when William Cayton recut it. He added a framing device that makes the adventure a dream experienced by four American boys visiting the Museum of Natural History in New York City. This version makes very little sense (the boys apparently have no parents or guardians and inexplicably bring canned food and axes on the museum visit), but it seems to be the predominate edition available. I’d love to see the original (with subtitles rather than the goofy dub) and reassess it. 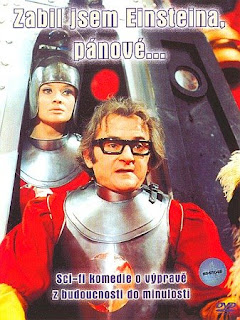 Oldrich Lipsky, up to his usual wacky antics, weaves one of his most ambitious and silly projects in this time-traveling farce. In the distant future terrorists have invented an advanced bomb that causes women to grow facial hair, precipitating a global crisis. The government rejects a high-tech shaving robot in favor of a more radical plan: going back in time to assassinate Albert Einstein during his 1911 visit to Prague and thus preventing modern physics from ever developing advanced bombs in the first place.

Giacometti (Svatopluk Benes), Robert and Gwen are assigned to the mission, along with an accidental fourth companion: a mischievous kitten. Robert meets his father, Gwen falls in love with the hapless target and Giacometti utterly botches the job during a madcap party where a chandelier is suppose to fall on Einstein’s head. They go back for a second try, but this time they are foiled by the future terrorists who use the cat as a spy and soon recruit the love-struck Gwen. It doesn’t take long before history has been altered, but the results aren’t quite what anyone expected.

Lipsky throws science and gender politics out the window and aims straight for the funnybone, ultimately creating a high-speed anarchic comedy that’s bizarre even by his own standards. While he’s not too highbrow to indulge in slapstick and striptease, the sheer creativity of his narrative gives a unique specificity to the broad laughs. The escalating chaos throughout the film eventually hits a critical point at which the rhythm and humor really clicks, and the resulting confusion helps mask the liberal dosage of nonsense on display. Still, Lipsky obeys enough of the time-travel precepts to pull out an amusing and rather extended ending that’s half predictable and half insane.

The performances are pretty good, especially Petr Cepek (“Valley of the Bees”) as the humble Einstein and Jana Brejchova as Gwen, who do an admirable job establishing chemistry (and ending physics) in their brief, frenzied romantic entanglement. Of particular interest is the 60’s-kitsch futuristic design (architecture, costumes and even the hairstyles don’t escape unscathed) and even the Edwardian scenes, with their ornate wood furniture and ostentatious dresses, are a pleasure to behold. None of this will change the fact that Lipsky’s work is a love-it-or-hate-it affair, but there’s certainly nothing else quite like it.

Tomorrow I’ll Wake Up and Scald Myself with Tea

Though I like all three titles in today’s arena, there’s no question that the verbosely declarative “Tomorrow I’ll Wake Up and Scald Myself with Tea” is my favorite. The titular event serves as the origin point in a series of complicated loops back and forth through time that can be hard to keep up with but pretty easy to follow. The delightfully contrived plot introduces Jan Bures, whose identical twin brother Karel works as a pilot for a time-traveling tourism company.

Karel is something of a bad apple, negotiating with a group of aging-resistant neo-Nazis to deliver a modern atomic bomb to Hitler just as his defeat draws nigh. But the morning before his plot goes into action, Karel chokes to death on his breakfast (and Jan scalds himself with tea). The tongue-tied Jan semi-intentionally impersonates his roguish brother to save Karel’s fiancé, who Jan also loves, from a broken heart. The masquerade serves his own interests, too, but obliges him to pilot the nefarious villains along Karel’s scheduled WWII cruise. Once they hijack the history-hopper, Hitler hijinks ensue (say that three times fast).

Ironically, the Nazi bad guys include Film Walrus favorite Vladimir Mensik (“Cassandra Cat,” “Who Wants to Kill Jesse?” etc.) and Svatopluk Benes who had momentarily pondered killing a pre-political Hitler in “I Killed Einstein, Gentlemen,” made seven years earlier.
Jindrich Polack’s “Ikarie XB-1” (1963) proved he could handle hard SF with a professional aplomb that was still relatively rare in the genre, but “Tomorrow… Tea” is evidence that Polack was equally adept at creating imaginative comedies. Petr Kostka is wonderful in the dual role of Jan and Karel Bures, capturing the opposite personalities of the bumbling underdog and scheming scoundrel with equal relish. We rely on Kostka to provide a reference point in the shifting versions of past and future while also anchoring the love story, the screwball comedy, the hectic action and social satire (note that Karel, the opportunistic capitalist, is aligned with Nazism); not an easy role.

Writers Josef Nesvadbas and Milos Macourek also deserve a round of applause for tying such a convoluted narrative knot and then unraveling it into a conclusion that has the superb symmetry of a cat’s cradle. There are certainly more than a couple of plot holes left lingering about, but Polack makes it clear that the focus is on the character’s growth and not the story’s soundness.

Today’s batch has to be one of the funnest sets I’ve done, and I’m certain the three films would make an unbeatable triple feature for Czech and/or time-travel loving cinephiles. However, I suspect that even seeing an uncut and fully restored edition of “Journey to the Beginning of Time” wouldn’t give it the necessary push to beat the other two films. “I Killed Einstein” has some really golden moments, but it isn’t quite first-rate Lipsky and will probably leave some viewers scratching their heads at the Euro-humor. My pick for the winner, therefore, has to be returning-champion Jindrich Polack and his underrated SF diamond.

Winner: “Tomorrow I’ll Wake Up and Scald Myself with Tea”
Posted by FilmWalrus at 5:47 PM

I demand more bizarre genre films like these and Death Laid an Egg.

I watched "Cassandra Cat" with the parents right before coming back to town. We loved it. Also, I'm back in town again.

Any clue in what town "Cassandra Cat" was filmed?

I'll do my best. Bizarre genre films are what I live for!

According to Peter Hames's Czech New Wave reference guide the town is Kelc, where the director, Jasny, was born. I believe the river scenes were shot on the Juhyne.

Unrelatedly, I'd like to watch "Mansion of the Ghost Cat" with you.

Whoa, a blog featuring "Journey to the Beginning of Time" ... unreal! Thank you! I actually saw it as a Saturday afternoon matinee in'68 when I was eleven years old. Yup, it was the reconfigured American Museum of Natural History version. I actually couldn't WAIT to take a boat out on the Central Park lake across the street from it in the hopes that I, too, could duplicate the intrepid boys' time-traveling adventure.

I'm glad to hear from a viewer of the original run, which was apparently rather brief. It's sad that the condition of the copies around today are in such bad shape, because I have some nephews that would really be into it.