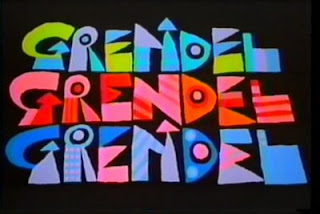 A lot of people come up to me and ask, “Film Walrus, why aren’t there more 80’s-tastic Australian animated musical adaptations of 11th century Anglo-Saxon epic poems told from the villain’s point of view?” I usually get angry.

Now don’t get me wrong, I appreciate the sentiments behind this question, but I have little sympathy for such people. They had their chance back in 1981 with the release of Alexander Stitt’s “Grendel Grendel Grendel” and they failed to patronize or appreciate it. I, at least, have the excuse of not having been born yet. 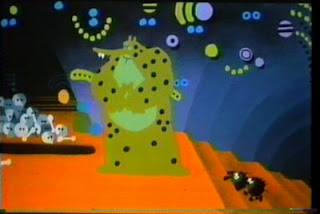 “Grendel Grendel Grendel” is based on James Gardner 1971 novel “Grendel,” which I have not read. As far as I can tell, however, the film stays surprisingly true to the book despite its literary, philosophical and darkly satirical nature. In the story Grendel is portrayed as a misunderstood monster of great curiosity and depth who demonstrates far more humanity than the warmongering, superstitious and largely ignorant tribesmen of King Hrothgar’s mead hall. 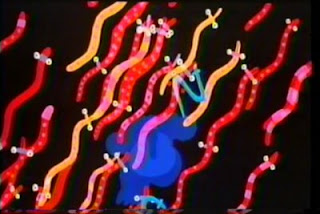 In the film, Grendel wanders in a state of supreme loneliness, unable to communicate with his mother, the only creature able to love him (as eloquently described in an early music number), nor with man or beast. Yet Grendel understands the words and songs of mankind, providing him insight into the rise of civilization and religion amongst the savages who alternatively fear and worship him. Grendel himself has a certain spiritual streak, too, that plays out through wistful soliloquies directed towards the silent heavens. 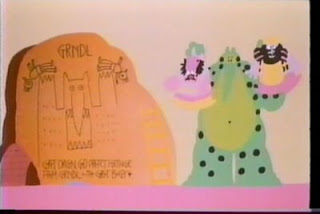 [Image: Grendel, on the verge of gobbling up a pair of sculptors, confronts his self-image in a carved idol.]

After struggling vainly with profound questions on the nature of reality, the curse of determinism and the meaning of life, Grendel gradually gives in to his role as a monster, an eternal anti-man, and regularly terrorizes the mead hall. The callous Beowulf shows up only in the last ten minutes of the film to mortally wound our tragic hero, who dies alone under the moonlight while calling out pitiably to his mother. 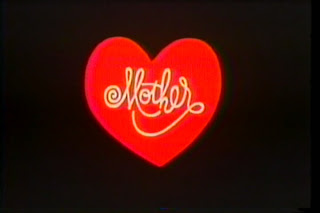 Given that the story includes human heads getting ripped off, nudity and a weighty philosophical discourse that culminates in the fatal and fatalistic failure of free will, one wouldn’t imagine this film would be a surefire winner with the kiddies. Just the same, the Day-Glo “Yellow Submarine” colors and peppy “Schoolhouse Rock” songs add a degree of child-friendly merriment to the otherwise doom laden parable on the futility of life. The dry offhand humor and knowing irony will appeal to adults. 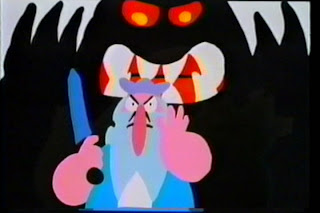 [Image: Grendel’s mother in a rare appearance bearing down on Hrothgar.]

The project was evidently low budget and the animation is definitely not at the level of Disney or Pixar productions, but “Grendel x3” has a certain charm to its style (exceeding, say, just about anything from Dreamworks). The Danish characters tend to be short and squat like dwarves, but with long pointy noses. Grendel looks something like a polka-dotted dragon runt. The general lumpiness of these character designs didn’t particularly appeal to me and took some time to get used to, but I give Stitt credit for originality. 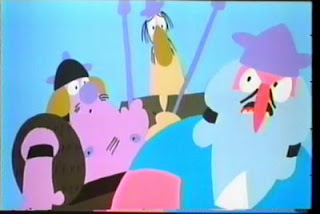 The film makes up lost ground with its high-contrast, supersaturated colors and clever limited-animation techniques. The style is characterized by strong angular lines and broad swaths of bold and sometimes lightly-textured color. It reminds me of the type of naïve childlike art you might magnet to a refrigerator or wallpaper around a cradle and I somehow don’t mean that in a condescending way. 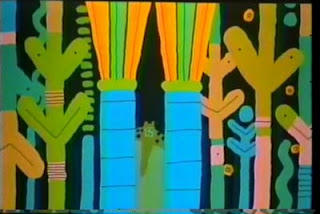 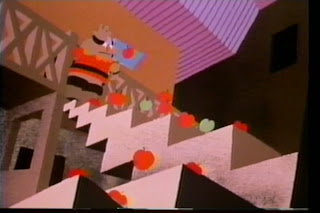 No doubt a cost-saving measure, the use of cave drawings and silhouettes images nevertheless enhances the aura of a more primal era where darkness and savagery ruled. 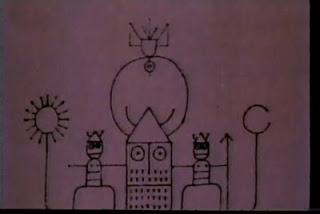 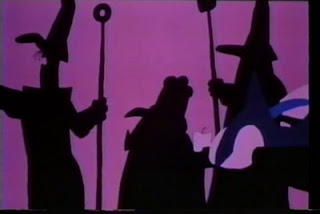 The voice-acting is a blast, and not just because of the wealth of accents. The brilliant Peter Ustinov (“Billy Bud”) takes care of Grendel, and endows him with the the all-important personality and sympathy he needs, both of which aren’t quite achieved in the visuals. Unferth, Hrothgar’s scheming second-in-command, delivers his lines in a deep bass tone that fits his gruff pride perfectly. The real show-stealer however is Beowulf, whose calmly aloof drawl exudes an ironic sophistication and self-assurance that contrasts smartly with Grendel’s tentative musings and feeble excuses. 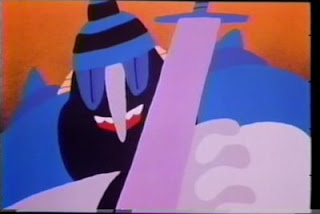 [Image: Legendary Viking warrior Beowulf, ever the stickler for proper dining etiquette, advises avoidance of the political and religious topics at the tavern table (for digestion’s sake).]

The music in “Grendel Grendel Grendel” isn’t quite good enough to become a cult hit in its own right, but the lyrics are catchy and simple enough to be likable for children and funny enough to be enjoyed by adults. One’s appreciation with likely depend on your tolerance for listening to omniscient dragon sages singing about Manichaeism and lilting folk-synth ballads describing Grendel’s horrifying features. Personally, I found it to be a well-suited mix of profound modernist absurdity and classical nursery rhymes. 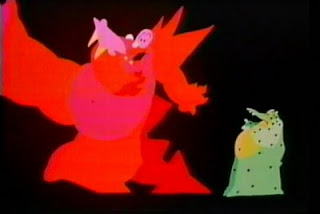 Your unlikely to see “Grendel Grendel Grendel” at your local video vendors anytime soon (or ever), but I found it well worth the price I paid on Ebay (Stitt’s live-action “history of monsters” intro almost covered the cost alone). I can only hope that the spirit of risk-taking eccentricity that inspired its production will get reincarnated in other projects. 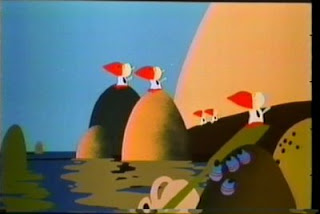 Posted by FilmWalrus at 6:43 PM

This movie rocked, and I dig your review. I'm glad I came over.

I think my next album will be composed of "lilting folk-synth ballads", although that might be too much lilt for me to handle.

I am old enough to have seen it in it's original release but, didn't hear of until it released on video.

I have an old tape to tape copy of this gem and was actually "googling" and checking ebay for a "store bought" copy in the hope of finding improved picture quality. I also hope against hope it will someday find it's way to dvd (though I'm not holding my breath).

I love this film and enjoyed reading your nice synopsis and review.

I'm glad to hear from fans of Grendel x3! This film deserves real distribution, for though it might not be a masterpiece, I can see it charming multiple generations and growing into a cult item. The style actually seems like it's coming back in vogue with the popularity of vector graphics. Check out "Sita Sings the Blues" for instance.

The novel is well worth the read. Read Seamus Heaney's translation of Beowulf then read Gardner's Grendel. Good stuff.

I found this film to be strikingly philosophic, and presented in a way that is ironic and, in it's own way, existential. I can't possible see how it would appeal to (unless they were just looking at the graphics; kids don't need complexity) or be understood by kids. There is, in fact, a touch of genius here.

I'm fortunate to have a Commercial VHS recording of this movie which I've dubbed to DVD, and it's a thrill to see a positive review I'd never seen before on the web.

I would like to point out something about the quality of animation: While Alexander Stitt chose a very seemingly-simple visual style for this movie, he achieves some stunning animated effects. Reflections distorting with moving water, very fine gradations of colors defining shapes, and some full animation, like a 180-degree swooping half-circle cirumnavigated around Grendel in his abstract, geometric landscape, are quite amazing.

Please tell me you're all kidding. This movie is the biggest insult to Grendel, and frankly even Beowulf, that I have ever seen.

1. Wiglaf is one of the King's men, when in reality he is not a Dane, but a SWEDE, who joins alliances with Beowulf

2. With that said, WIGLAF DIES BEFORE HE AND BEOWULF COULD EVER EVEN HAVE THE OPPORTUNITY TO MEET

3. Unferth is a cool, strong rogue-on-the-run who befriends the King and defends him? In what f*cking universe?

4. The shaper is made fun of, when in reality shaping is one of the MOST IMPORTANT FACTORS IN GRENDEL FIGURING OUT HIS IDENTITY.

I hate this movie because it does not teach children anything about the actual novel, anything actually true of the actual epic and is retarded. I cannot believe grown adults are so disgraceful.