Review of Who Wants to Kill Jesse? 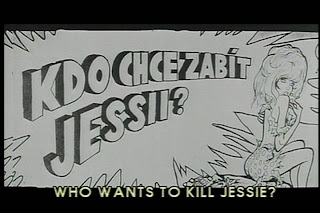 Czech New Wave films are often praised for their humor, but they are rarely considered laugh-out-loud comedies. Instead they tend to be dark, pessimistic commentaries on human nature and self-interest (“Loves of a Blonde,” “Firemen’s Ball,” “Closely Watched Trains”) or absurdist, anarchic attacks on political corruption and oppression (“Daisies,” “Cassandra Cat,” “The Joke,” “The Report on the Party and the Guests”). Getting some of the humor (or even perceiving the presence of humor) requires knowledge of East European history and Czech culture which not everyone possesses. No so, “Who Wants to Kill Jesse?” (1966).

Peter Hames, in his book The Czechoslovak New Wave (2005), my bible on the movement, never even mentions “Who Wants to Kill Jesse?” That’s particularly unfortunate given how well it fits into one his main theses: that the Czech New Wave was even more free and innovative than the French Nouvelle Vague, because of their willingness to break with realism. That difference doesn’t hold for all cases (Godard used documentary techniques for very imaginative ends), but it does account for the divergent styles of the two cultures. The French saw tactics developed by Italian Neorealists as valuable influences within the Western European cinematic tradition, while the Czechs sought an escape from the taint of Social Realism mandated elsewhere within the Eastern bloc. Furthermore, fantasy provided a means to disguise opposition to the communist regime, especially after the heyday of the Prague Spring when the government cracked down on open dissent. 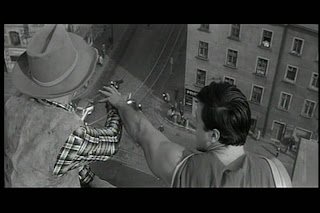 “Who Wants to Kill Jesse?” was made in 1966, during the nation’s peak of creative experimentation and international recognition. “Daisies,” one of the movement’s most radical films, came out the same year. “The Shop on Main Street” had just taken the 1965 Foreign Film Oscar. “Closely Watched Trains” would win the prize in 1967. Perhaps “Jesse,” a dolled-up B-movie at heart, probably got lost in the shuffle of prestige pictures, though its casting of Czechoslovakia’s first Playboy model, Olga Schoberova, could certainly have filled theaters seats. 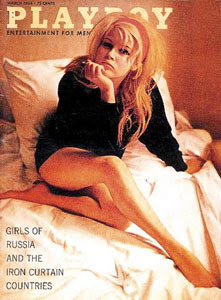 [Image: Olga Schoberova, the Jesse of “Who Wants to Kill Jesse?” She was the first Czech model/actress to gain international attention, in an era before Czech models virtually became a cliché (see Paulina Porizkova, Eva Herzigova, Veronika Zemanova, Daniela Pestova, etc.). Here she is on the cover of Playboy’s March 1964 “Girls from Behind the Iron Curtain” edition. Go forth, Olga, and gather me search engine hits.]

Dr. Jindrich and Dr. Ruzenka are a pair of scientists who are not-quite-happily married. Jindrich, a timid and mildly bumbling engineer, is unable to come up with a solution for fastening heavy objects into place. His strangely idle staff use the company safe as a snack bar and tease Jindrich with a comic book serial called “Who Wants to Kill Jesse?” about a busty wonderwoman who invents antigravity gloves to do what Jindrich only dreams of. 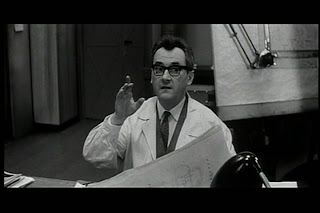 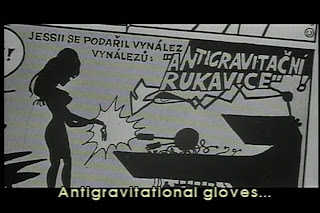 [Image: (Top) Jindrich at work. (Bottom) This frame shows us two important things: 1) How to write “Antigravitational Gloves” in Czech and 2) that Jesse has at least one other non-glove item of clothing that defies gravity.]

Meanwhile, Dr. Ruzenka and her all-male staff are having much more success pioneering a machine that can visualize dreams and a serum that can exorcize them. They demonstrates its usefulness by banishing a cow’s gadfly nightmare, decreasing its stress and insomnia and presumably increases its milk yield. The onlookers in the room recognize that the scientists have thought too small; the power to manipulate dreams could have implications much wider than dairy output. Amidst the excitement of the success, only a few people notice all the flies that seem to have mysteriously materialized in the room… 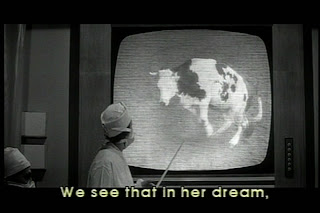 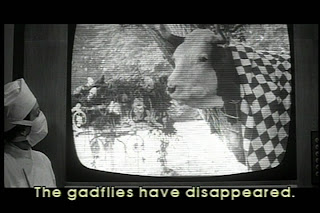 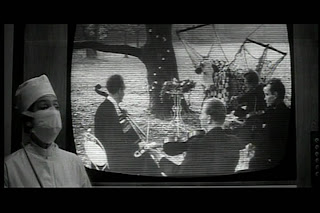 [Images: Bovine sleep studies. Was there ever any question how far behind the US was in Cold War research and technology?]

That night, after toying with some calculations for real life antigravity gloves, Dr. Jindrich sinks into a fitful sleep. He finds himself joining forces with Jesse and trying to evade the gadget-grabbing villainy of a pistol-wielding cowboy and an evil version of superman. Seeing him toss and turn in his sleep, his wife makes the ill-advised decision to inject her miracle serum into Jindrich (experimental medical procedures must have been much laxer back then). The next morning Jindrich wakes up next to the world’s sexiest side-effect (Jesse, played by Olga Schoberova), much to his wife’s dismay. Worst still, the crooked gunslinger is in the bathroom and Evil Superman is tearing apart the kitchen. The cartoon exiles battle for the techno-gloves while the dueling doctors go to court, and things get rapidly out of control as this fast-paced Prague-romp steps into high gear. 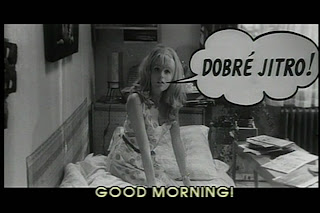 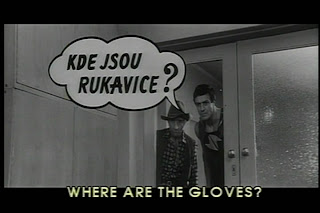 Director Vaclav Vorlicek (Three Wishes for Cinderella) walks a fine line, making a paragon and a parody of B-movies at the same time (“The Lost Skeleton of Cadavra” and “Slither” are in the same vein). Like the best in the genre, his ideas come so fast and fun that you never question their validity except to laugh at the delightful absurdity. A machine that can transform dreams about beer into dreams about milk? A comic book come to life with its mishmash of cartoon archetypes? Jindrich’s staff (all women between the ages of 18 and 25) building anti-gravity gloves in the space of a single afternoon? None of this is ever questioned within the film’s confident logic. 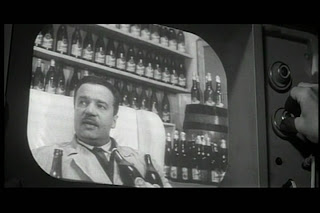 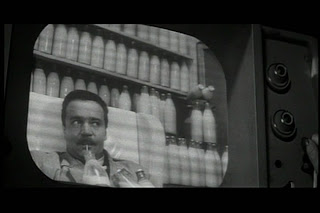 [Images: What strange alchemy is this that transmutes beer into milk? That’s Vladmir Menski in these shots, a prolific Czech character actor who appears in many of my favorite New Wave films like “Valerie and Her Week of Wonders,” “Cassandra Cat,” and “Loves of a Blonde.”]

There’s a surprising quantity and variety of jokes packed into the film’s 70 minute runtime. The style of humor starts with the type of understated foibles characteristic of Czech comedy and quickly grows into elaborate sight gags and cartoon violence. Broad laughs are scored by Evil Superman biting into plumbing, pulling a neighbor through the wall by the telephone cord and taking a time out from the wanton destruction to play some ominous classical music on a piano. 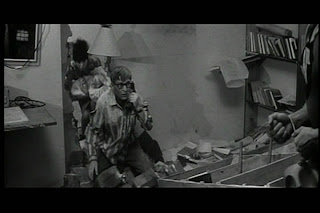 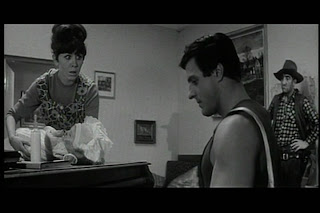 [Images: Evil Superman is equal to any task, be it busting through walls or busting a groove.]

A clever running joke involves comic book dialogue, which is always rendered in speech balloons even after the character break into the real world. The speech bubbles can be wiped, erased or shattered and tie into several gags, as when an illiterate boy doesn’t realize the he’s just been cussed out by the villain or when a courtroom camera can’t record a comment because the 2D caption is at a 90 degree angle.

There are also plenty of political potshots, though “Jesse” is hardly as grave or vitriolic as something like “The Report on the Party and the Guests.” The very idea that the government should get involved with manipulating the populace’s dreams works as a critique of the control-mentality of the Soviet Union and its satellites and touches upon issues of censorship, propaganda and brainwashing. The invigorated ink intruders quite explicitly assert their right to life, at one point declaring the “freedom to dream,” though this hardly stops the bureaucrats, politicians and scientists from seeking to erase them. 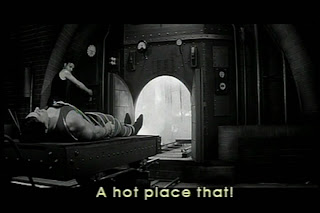 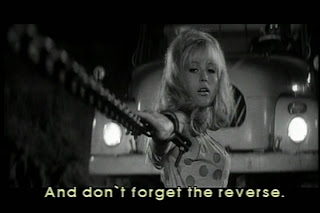 [Images: (Top) Evil Superman about to get cremated alive. His response: “Very refreshing. How much?” (Bottom) Jesse getting pulled apart by two trucks during one of several situations involving her getting tied up. Robbe-Grillet would probably be a fan.]

Corruptibility also gets a gag or two, as in a prison scene where Jindrich comically bribes the guard with bills hidden all over his body. Perhaps the best example of wry political criticism occurs when Jesse is being drawn and quartered by two enormous trucks. A sympathetic onlooker asks, “Can’t she just be re-educated?” 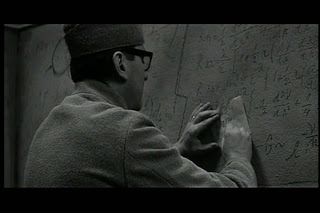 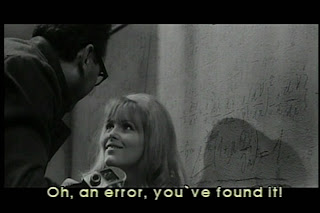 [Image: Jindrich spends his time in the big house working out the mathematics of the magic mittens. He escapes to rescue Olga, but sneaks back into his cell later to finish serving his time.]

Then, too, there is a more traditional trading on gender politics for humor. Jindrich and Ruzenka’s marriage is setup with all the familiar middle-class clichés, but manages to get a few laughs by taking it in such unusual directions. Ruzenka is more than a little jealous when she catches her husband dreaming compromising images (actually, he’s trying to untie Jesse after she was roped and whipped by Evil Superman), and she later tells him in a much-applauded court statement that, “If you’d been dreaming of your wife, you wouldn’t be here.” Of course, she’s not really any less susceptible to fantasizing, and soon develops a crush on Evil Superman. 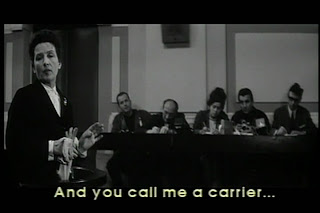 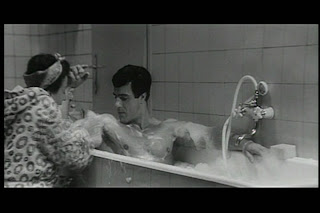 “Who Wants to Kill Jesse?” has quite a bit of artistic merit as well, at least within the context of a low-budget B-movie. Jindrich’s dream sequence is particularly impressive, with trippy black and white set design in which brick textures and spider webs are drawn onto cardboard walls. The use of animation layered over live-action predicts similar techniques in “Who Framed Roger Rabbit?” (even the titles sounds similar) though its more conservative here; all the characters are played by real actors but the motion lines, explosions and speech bubbles appear. Most of the effects are undeniably low-fi, but no less funny for being so. 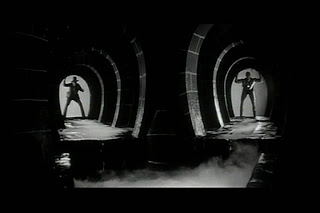 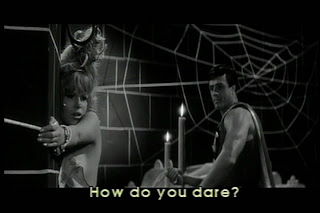 Vorlicek shapes the action to simultaneously suit the cartoon tone and limited resources, like during a rooftop chase and a lecture hall battle involving a lot of rulers. In the second half of the film the tone turns darker in keeping with the nightfall. There’s a Grand Guignol series of extermination methods lit in gothic splendor and an outdoor race over chiaroscuro cobble reminiscent of “The Third Man.” 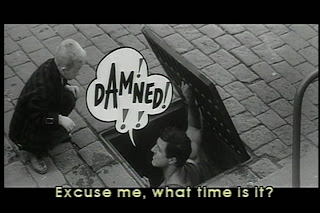 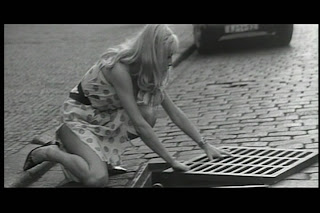 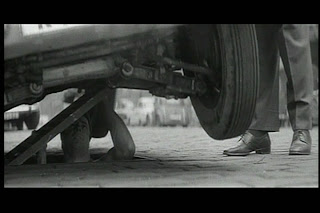 [Images: Is it going to far to read the chase through the sewers as a humorous homage to “The Third Man?"]

Overall, this was exactly the type of film I stay on the lookout for: art-pop B-movie bizarreness with original ideas, solid delivery and yes, a high degree of Czechness. You can rent this through Netflix thanks to those ardent archivists and diligent distributers at Facets. I bought my own copy online the same night I saw it. 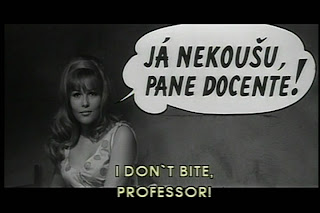 Posted by FilmWalrus at 4:25 PM

"The Third Man" was filmed in Vienna, punk! (I know many European cosmopolitan sets are filmed in Prague, but I'm pretty sure that one was mostly filmed on location with some exceptions for the sewers.)

In any case, yeah, that sounds cool.

I have no idea how I got that switched up. I'll make the change.

I just set that last screenshot as my desktop wallpaper.

An excellent choice. This film had so many great shots; lots of visual puns and Czech camp. I took dozens of stills that I didn't even use for the review. If you'd like me to take any others for you to use in your many projects, I sure can (since I am now a proud owner of the DVD).

I must see as well! Looks super cool!
Joe D