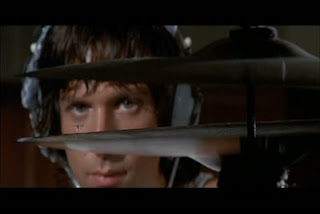 [Image: Robert, moments before squashing a fly with a climactic cymbal clash.]

“Four Flies on Grey Velvet” (1971) was released for the first time on R1 DVD this February, and I didn’t even find out until last month. That’s pretty inescapable evidence that I’ve been slacking off on my giallo intake, but no reason why I can’t have an excited delayed reaction. “Four Flies” is the last of Dario Argento’s ‘Animal Trilogy’ and the last to get released. It falls somewhere between the quality of the groundbreaking “The Bird with the Crystal Plumage” (1970) and the stodgy “Cat o’Nine Tails” (1971). 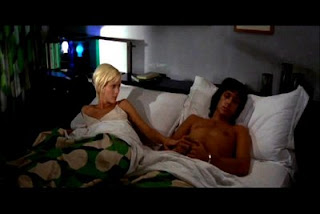 [Image: Robert and Tobias.]
Robert Tobias is a rock band musician who finds himself annoyed by a mustachioed stalker. After pursuing the man onto the stage of an abandoned theater, Robert accidentally knifes the confused guy, a murder inconveniently photographed by a masked fiend in the upper galleries. Robert and his wife Nina are then terrorized by the murderous blackmailer, who knocks off their diverse network of friends and helpers (including a gay private eye and a hobo named God). After about an hour and a half of this, the deranged killer is finally revealed. 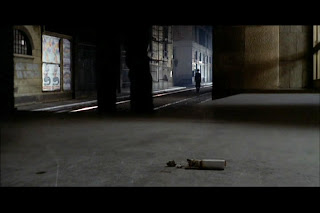 The plot is easily amongst the worst of Argento’s oeuvre, with some of the poorest psychological balderdash to motivate the killer in particular. There’s vague hints concerning the identity of the villain, but nothing resembling actual clues, and with our protagonist passively going about business as usual while he hopes for one of his friends to catch the blackmailer, there’s no sense of an investigation with forward moving progression or rising tension. 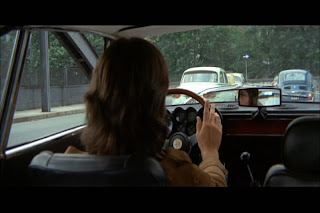 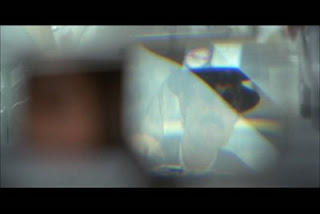 [Image: At least there’s no shortage of focus pulls, like this elaborate zoom into Robert’s rearview mirror.]
The upside is that Argento, cinematographer Franco Di Giacomo (“Who Saw Her Die?” (1972), “The Killer Must Kill Again” (1975)) and special effects wizards Carlo Rambaldi and Cataldo Galliano work out a visual style easily on par with Argento’s best work. Their inventiveness is rather astounding, including at least three ideas that I’ve seen ripped off (more likely reinvented given the film’s low penetration) and praised in many films made decades later: slow-motion “bullet time,” following a phone cable from caller to the recipient and pulling the final image off the retina of a corpse (which even Argento admits was a stupid concept, but he liked the way it looked in the film).

[Image: A step-by-step transition from a phone booth to the killer’s home set along the route of the wires themselves.]
The special effects sequences largely guide the plot, rather than the other way around, but Argento makes this into an asset and even a primary theme. “The Bird with the Crystal Plumage” focuses heavily on what we see and how we interpret it, but “Four Flies on Grey Velvet” is more about vision on a more fundamental if less tantalizing level: how what we can and can’t see creates fear and how vision can grant power and strip privacy. Robert is tricked into manslaughter (staged, quite literally, on a stage) because he is being spied upon, then spends the rest of the film rather helpless as the villain taunts him by repeatedly breaking into his house and planting photos of the crime. At least two characters witness the villain’s work and try to blackmail the blackmailer, creating a spiral of peeper power struggles with predictably deadly results. 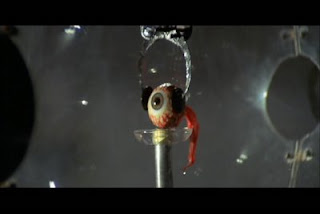 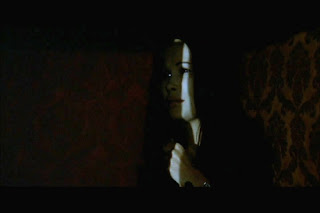 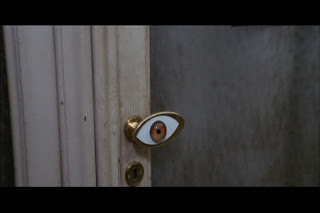 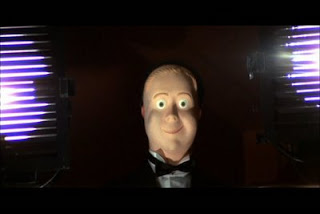 [Images: Plays on vision: (1st) Running a laser through an eye to get its last sight, in this case the titular four flies. (2nd) A classical peering-out-of-wardrobe-as-the-killer-searches shot with the eye caught in a sliver of light. (3rd) The type of doorknob every private eye should have. (4th) The killer’s wide-eyed grinning mask, paired with spotlights and a camera lens to make it the ultimate gaze.]
Most of the scenes are quite dark, probably one of the oldest and most worn tactics for generating fear and uncertainty in horror films. Despite this, however, Argento’s colors are usually remarkably vivid in “Four Flies,” very much in keeping with his other works from the 1970’s. It’s a combination the director often uses to apply lurid, emotion-inflected splashes onto the more typical canvas of brooding shadowy suspense. “Four Flies” contrasts the darkness with an even more unique technique, in that scenes set in the mind’s eye are brightly lit and uniformly white. 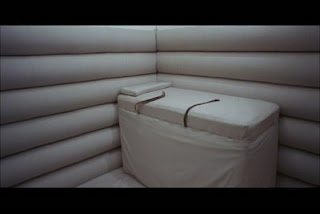 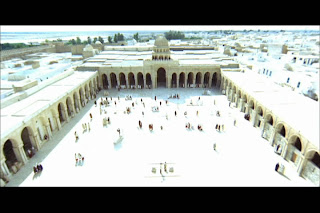 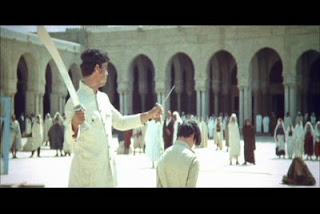 [Images: The killer’s traumatic memories of time spent in a padded cell and Robert’s reoccurring dream of a Mid-East execution.]
Like with many gialli, the games played with lighting, color and camera position don’t necessarily have any particular meaning; what’s important is how they make a viewer feel. To take an example, one scene has Robert’s maid waiting in the park to be paid off by the killer. From the first shot, we know she’s going to die and the whole exercise could unfold with excruciating predictability. Instead we get a series of intriguing flourishes: the mood changing from safe to scary via startling jump-cuts, the chase runs through an illogical hedge maze and crushingly tight tunnel and the final stabbing is left unseen, but heard from the opposite side of a tall brick wall where a young couple impotently responds to the cries for help (reminiscent of a scene in “The Leopard Man” (1943)). 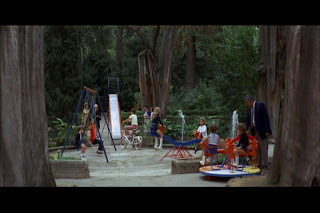 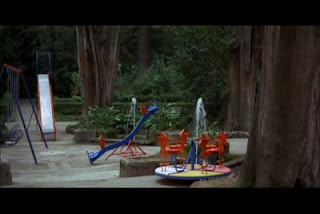 [Images: The music on the park’s loudspeakers cuts off abruptly, followed by a trio of jump-cuts (every bit as quick as just glancing down the two screenshots above) showing the park going from full-swing to empty. By dramatically abridging the maid’s wait from an hour or so to a few seconds, we’re thrown off-balance.]
Other set pieces may go a bit too far, particularly one at a luxury coffin convention that serves almost no purpose and is probably intended as comic relief. There are a few other moments of largely misguided humor, including a bible-quoting bum and an incompetent mailman, that only drag out the already sparse pacing. 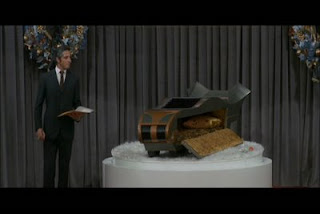 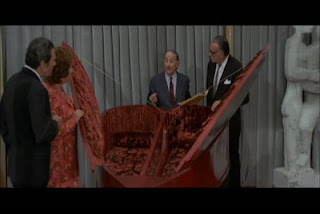 [Image: Presenting the race-to-heaven and honeymoon coffins!]
My biggest complaint, other than the story, is the music. It’s very rare for me to give a thumb down to anything composed by Ennio Morricone, but this is some of his least impressive work. Robert is a drummer, and I wanted to like the way that his band’s music and his rambling drum solos are crosscut into the action, but it doesn’t have nearly the right feel. Apparently Argento wasn’t happy with it either, and the two didn’t work together again until the mid-90’s. 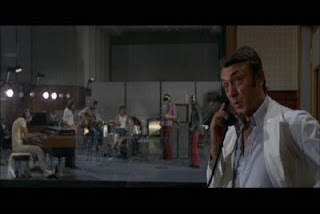 One of the best reasons to watch giallo is the visuals, and they’re strong enough here to compensate for the admittedly extensive flaws. With the DVD now widely available and the print cleaned up expertly, giallo collectors owe it to themselves to pick this one up.
Walrus Rating: 7.0 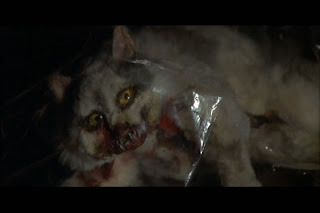 [Image: What do you think: the most horrifying cat corpse ever or what?]
Posted by FilmWalrus at 3:07 PM

An eyeball doorknob?! WHAT

The mask is so great, totally makes my list.