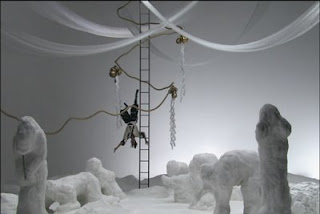 It’s safe to say that most Japanese film enthusiasts are familiar with the cult director Seijun Suzuki’s work (thank you, Criterion!), especially his unconventional psychedelic yakuza films from his days at Nikkatsu. Suzuki was an important dissident from within the studio system, a spiritual brother of Nicholas Ray and Samuel Fuller who took subpar B-movie scripts from his producers and twisted them into surreal, inverted genre-busters infused with a unique auteur sensibility. While a cult audience followed his film even at the time, Nikkatsu’s higher-ups hated his unauthorized script changes and, inevitably, he was fired in 1968. 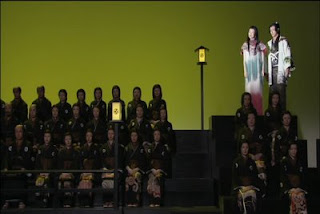 Somewhat ironically, the films that Suzuki made after his studio days are less well known despite his immensely increased degree of artistic freedom. I can understand why his studio work is more popular, given that Suzuki’s use of arty techniques and surprising aberrations hangs handsomely on the unpretentious genre frameworks that ground the stories. His later free-wheeling experiments are less accessible and harder to follow. The strangeness that initially popped out of the details came to take center stage. I confess to being somewhat disappointed with “Zigeunerweisen” (1980) and “Pistol Opera” (2001). 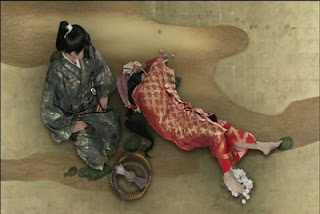 His most recent and probably last film, “Princess Raccoon” (2005), may be the key that has opened up my appreciation for his later career. It’s a musical starring Joe Odagiri as Prince Amechiyo and Zhang Ziyi as Princess Raccoon. Amechiyo’s father, a powerful demon, banishes his son to a lonely mountain out of pride (lest his son become more beautiful than the father). Before Amechiyo’s kidnapper reaches his destination, the princess of Raccoon Palace rescues him for her own mischievous purposes and soon falls in love. 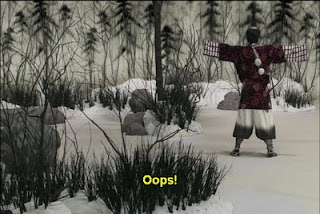 “Princess Raccoon” is set in the world of ancient Japanese folklore and mythology, populated by gods, demons and shape-shifting raccoons (actually tanuki, but I refuse to enter into that debacle) who meddle in the affairs of humans. The time period is a bit nebulous, with renaissance era Europeans wandering around in the background and a giant classical Italian painting dominating one set. Equally so is the landscape, which includes soundstages in the heavens, earthly outdoor terrain and impossible CG environments. 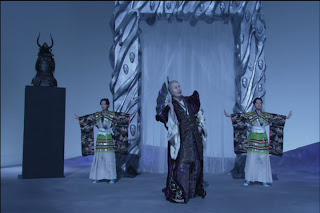 The point, made clear from the very start of the film, is less the romance of the relatively uninteresting characters, than the spectacular design concepts that Suzuki engineers from this chaos. One suspects that he cast actors based on whether he liked their faces rather than on their emotive talents, and he tends to take more interest in their elaborate period costuming than their delivery. His rainbow palette is outright gaudy, but allows us to soak up a childlike love for color and contrast devoid of overly academic good-taste. 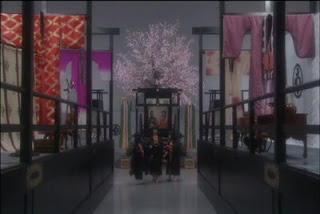 There’s a great deal of risk when a director becomes obssessed with orchestrating essentially undemanding eye-candy, and it’s doubtless that may viewers will find the film self-indulgent and shallow. However, Suzuki does his best to make us understand that the artifice is part of the point and that the visual presentation is worth our attention. Katie noted that the film reminded her of “Percival” (1978) in it’s intentional artificiality, but its lineage can be traced natively in the strong Japanese tradition of ritualized staging and detached abstraction (visible in films as diverse as 1963’s “An Actor’s Revenge” and 2001’s “The Happiness of the Katakuris”) that owes more to Kabuki than Brecht. 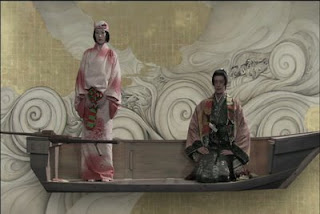 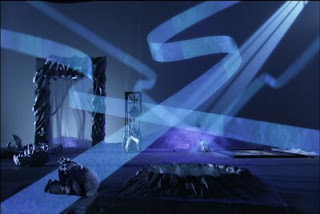 By foregrounding the methods behind the fantasy and illusion, “Princess Raccoon” makes us admire the process of creating as much as the experience of viewing. The intricate painted backdrops (sometimes with the wrong perspective), stuffed raccoon toys attached to strings and crude CG (I’d quibble that it goes too far) are never integrated systematically into a kind of realism, but are left isolated enough so that we can appreciate them as individual elements within a swirl of arts and crafts. 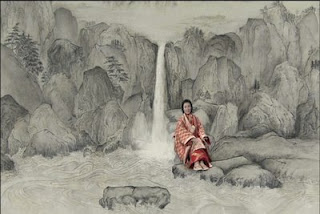 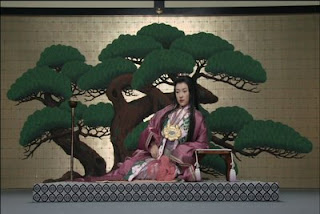 [Images: Some of the backgrounds are designed in the style of traditional Japanese ink and woodblock art.]

This makes for a film that isn’t particularly smooth and cohesive, but somehow Suzuki never lets it devolve into the type of postmodern pastiche where the humor comes from random non-sequiturs and anachronistic juxtapositions. He unwisely includes a weak subplot that breaks up the flow of the romance, music and adventure, but he makes the right decision to eschew manic editing. The craziness is contained, if just barely, and everything fits comfortably into Suzuki’s overarching vision, though his is a dreamlike vision divorced from ordinary reality. 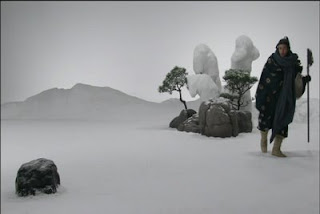 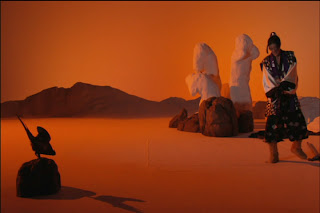 [Images: One set is nominally reconfigured and relit as Prince Amechiyo walks in a circle around it. The shot changes from arctic to desert, either to symbolize the long passage of time on his journey or the variety of terrain he traverses. By recycling the same camera position and layout, we can’t help appreciating how the mild redressing of the few props changes the atmosphere completely. The taxidermied hawk adds a touch of humor.]

Suzuki preoccupation with beauty is also addressed thematically within the narrative. Beauty is shown to be a powerful force independent from morality; a force capable of both good and evil. The prince’s father, for instance, is fatally consumed by pride in his beauty, while vanity hampers the budding romance between Amechiyo and Princess Raccoon. But the film also shows how beauty is an inspiration, a cause for celebration and a foothold for love. The film is neither particularly original or deep in what it has to say on the topic, but it’s self-aware about its superficiality. 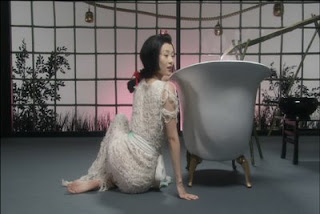 [Image: The princess is so beautiful that the firewood for her warm baths burns with jealousy.]

The eclecticism in the art design is shared by the music numbers. Suzuki bounces around the world and across history with everything from traditional poetic pieces and show tunes to rap, tap dance, ska, hymnals, hard rock, opera and children’s choir. Like Hollywood musicals of old, the songs are funny and buoyant and more about having a good time than about demonstrating raw musical talent. 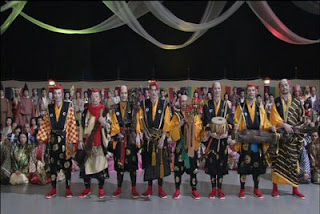 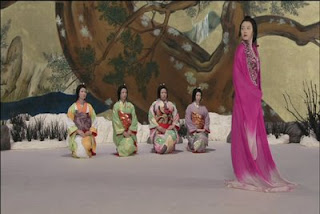 [Image: (Bottom) A literal and Greek chorus of Japanese ladies-in-waiting.]

Suzuki’s biggest flaw in his musical numbers isn’t the questionable vocal training, but his limp choreography. He never quite manages either the graceful precision of geisha dancing or the effervescent energy of a Hollywood showstopper, though some of his concepts are intriguing, including dancing duets of women giving birth and sumo wrestlers who play drums on their massive bellies. Suzuki has always been better at composing static images than at capturing motion (it’s part of what makes his action movies so startlingly different), causing the dancing to feel poorly directed and less spectacular than the backdrops. 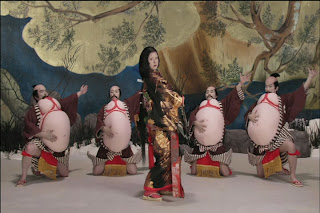 The films from both the highest of high culture and the lowest of pop culture are often accused of having poor plots and acting, but for very different reasons. Somehow “Princess Raccoon” manages to sample those flaws from both ends while also capturing their best attributes: inventive artistry and unabashed entertainment, respectively. It’s a combination that might be said of Suzuki’s 1960’s work, though it manifests quite differently. If this really is his final film, I think it makes a fine finish. 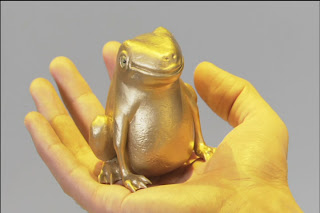 [Image: One croak from the Frog of Paradise is all you need.]
Posted by FilmWalrus at 5:45 PM

I've seen this around for a while now and was sort of sure it wasn't my thing, but I'm glad I got to see some of the pretty screenshots from it! Tanukis are the best! I actually prefer Pom Poko to Mononoke.

Loved this movie. I'm a westerner, spent time in Japan, loved this live-action fairy-tale love story. Even though the writer/director is somewhere in his 80's, he has a funny, surprising and high-energy style that will enchant you. If you're used to Disney and Pixar, maybe you should give it a miss, because it's off-beat and surprising--but I'm buying a copy for myself--loved it.