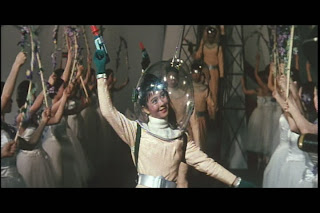 Yasuzo Masumura has been a revelation for me. I never came across his name during my association with Japanese film fans more hardcore than I nor in reading books like Chris Desjardins’ “Outlaw Masters of Japanese Cinema” where, by all rights, he should be featured. A little distribution company called Fantoma has been quietly releasing Masumura’s films and totally rocking my world.

Masumura combines the best of his post-occupation contemporaries: the political hysteria of New Wave directors like Nagisa Oshima* and the pop-art excesses of genre-innovators like Seijun Suzuki. Masumura has the rebellious attitudes of both, ruthlessly dishing out social criticism, controversial content and stylistic experimentation in a career of thoroughly interesting films. I’ve recently had the pleasure of watching his powerful medical war drama “Red Angel” (1966) and his indictment of corporate morality and capitalist society in “Giants & Toys” (1958). I look forward to watching everything by Masumura that Fantoma makes available. 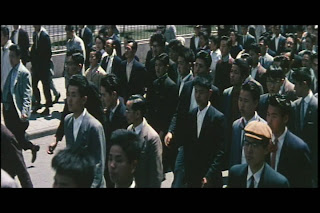 “Giants & Toys” (1958) takes place during a ridiculously allegorical three-way market war between rival caramel companies World, Giant and Apollo. Each manufacturer is under intense pressure to step up sales and they all resort to the same gimmick: prizes. Nishi, our naïve protagonist, is a new hire in the marketing department of World. In the type of implausible touch that makes me so love Japanese cinema, his best friend from school is a new hire in Giant’s marketing department and his hard-edged girlfriend is the rising publicity chief for Apollo. 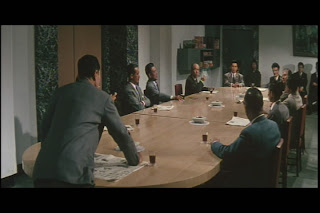 The three competing up-and-comers quickly stretch their friendships to the breaking point as they spy on and one-up each other’s prize campaigns. World chooses a timely space theme, Giant hires a caveman mascot and offers exotic pets and Apollo preys on the dreams of the masses by touting that they will subsidize a life “from the cradle to the wedding.” Central to the story is World’s coached and constructed spokesperson, Kyoko, a pretty taxi-driver whose teeth have been rotted by candy. Nishi, who she nurtures a crush for, witnesses her tailor-made rise to fame and ultimately becomes her unofficial manager. 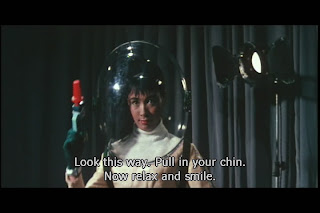 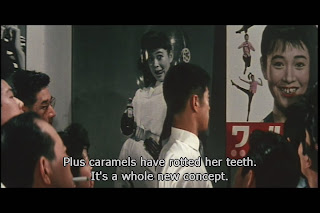 As a satire of Japanese culture in the late 1950’s, you couldn’t ask for more. The depiction of pop star vanity and corporate greed is about as searing as they come. Morality and ethics fly out the window when profits are at stake, every insincere idea to exploit the public is given the green light and former pals race to backstab each other for the slightest gain. Masumura cuts a vicious swath through Japanese society and leaves any number of lesser themes bleeding to the wayside: marketing as mind-control, media saturation, the banality of tv/movie tie-ins, nepotism, the fabrication of fame, sexual undertones in children’s advertising, the apathy and amorality of youth culture, inter-Asian racism, obsessive fascination with technology and more. Masumura even hitches his satire to America, making an unmistakable accusation as to the origin of this runaway-train capitalism: when an executive is asked whether the trends of American children will apply to Japan, he dismisses the question as inept, “Japan is America.” 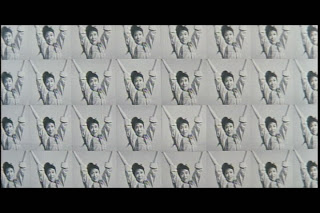 [Image: The pop-art intro credits are followed by a sequence of ad imagery multiplying exponentially, like a zygote… or a virus.]

Masumura isn’t one for subtlety, but his brand of literalism is creatively entertaining. The company being called World, for instance, is both hilariously generic and overtly symbolic. Another example is the acute stomach aches suffered by the corporate cut-throats. The cause is implied to be some combination of too much candy, unremitting stress and late-career conscience pangs. At one point the newly appointed director, mad with greed and ambition, coughs up blood on his hard-won promotion papers. Later, as he looks out over the headquarters and raves about the need for underhanded tactics, he glows a demonic red, lit by the neon logo outside. 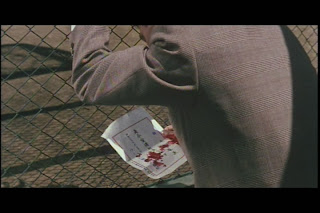 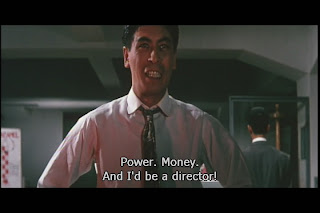 Masumura knows where to put the camera to maximize his meaning; one of his other throw-away symbolism shots has Kyoko visually buried alive under the bouquets of worshipful fans. Another interesting image that reoccurs throughout the first half of the film is a cigarette lighter that refuses to light. Though it could have been a meager metaphor for a “broken” society, Masumura uses it as a trigger for several montages. The super-imposed lighter throws impotent sparks as the camera lingers over the caramel production cycle or the launching of a publicity campaign. I’m not sure I entirely get it… but it’s memorable. 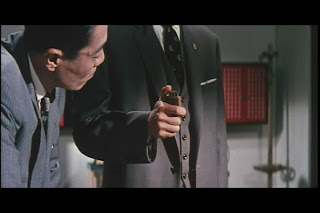 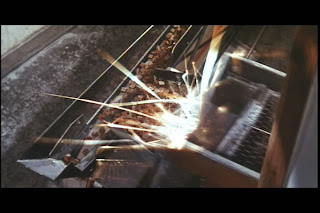 [Images: The sparks from a lighter appear over a tour of the caramel factory in the first of several lighter-related montages.]

Camerawork is key to Masumura’s distinct appeal. His haphazard cutting often violates basic principles of continuity and clarity and yet he never loses a sense of coherence. He establishes a sense of three-dimensional space by keeping the camera mobile, frequently partitioning each shot into a series of two or more movements along different lines. The combination of gentle glides, whip-pans (and whip-tilts), inward tracking and sudden motion (as when a character stands up or crosses the frame) keeps the action perpetually shifting at right angles. Though unexpected cuts keep changing our orientation, we eventually navigate the sets such that we know our way around.

The TohoScope cinematography is brightly lit, capturing the corporate underworld in the harsh glare of spot-lights, camera flashes and cheerful daylight. Yet under the shimmering veneer masks an economic cage-match where you must, “Eat or be eaten. Cheat or be cheated.” “Giants & Toys” is not a big-budget film and it doesn’t have a great deal of either polish or atmosphere, but the contradictory optimism and pessimism on display captures the mood of a society trading its traditions and morals for technology and luxury. A typical movie treatment of this transition period would close the curtains on some complacent compromise, but here equilibrium is never achieved. Masumura’s world remains steadfastly off balance. 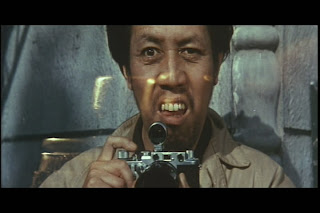 Oddly, Nishi’s lead is one of these least compelling aspects of the film. His earnest naivety prevents him from developing as deeply as Oshima’s cruel youths and drags him through a predictable series of disillusionments. He is full of contradictions, like his blunt attempts at subterfuge while pleading for fairness or his rejection of Kyoko on principle while dating a far more malicious character. I’m not sure if I should interpret these as poor scripting or good characterization; I suppose most of us are riddled with inconsistencies. There are a couple moments that imply the soul-searching not quite realized elsewhere, as when he stares without comment at the former female promoter whose career was left in the wake. Kyoko, conversely, has no trouble capitalizing on her position. She jettisons her qualms as she rockets from B-grade astronaut actress to full-blown diva. 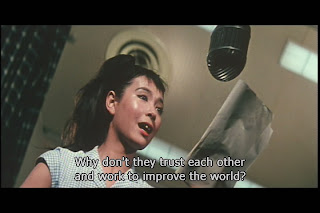 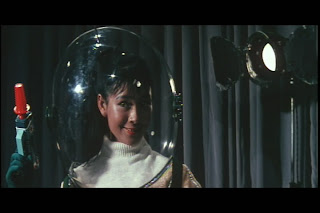 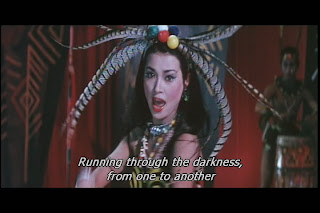 If you like the subgenres which pool in the seams between 1950’s and 1960’s Japan, like the counter-culture youth films, sun-tribe pics, political diatribes, stylish low-budget yakuza flicks and the like, then “Giants & Toys” will be a safe bet. It’s not nearly as wild as modern voyages into Japanese weirdness, but it has an earthier satiric tone that makes the cultural criticism actually count.

I tip my hat to Fantoma for unearthing such rich treasure. 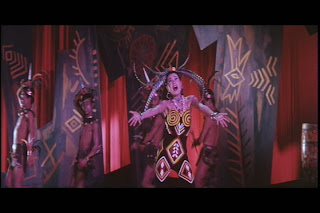 * As a special bulletin for fans of Oshima or Japanese film in general, Criterion has confirmed that they will be putting out a special release of “Merry Christmas, Mr. Lawrence,” a Japanese prison movie starring Beat Takashi Kitano and David Bowie. I’ve been hoping to catch the film for several years now. The film is not (yet?) listed on their coming releases page.
Posted by FilmWalrus at 1:25 PM

Sounds awesome.
David Bowie + Beat Takashi Kitano sounds like one of those mathematical formulas for greatness.

Bowie and Kitano? Hoooooooooly shit. What a way to overshadow everything that came before it in the article.

It might be released through one of Criterion's puppet branches rather than the main line, but it is rather exciting. I'm surprised it hasn't been more available sooner.

You should find best essay writing services with great knowledge at reasonable price.because you are a student so you have to find a writer with academic knowledge. I recommend DigitalEssay.net  for best services.try this.