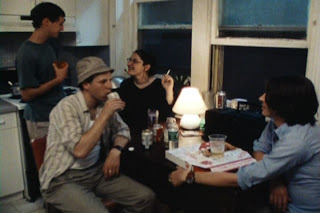 Pretty much the first film blog I ever read regularly was Like Anna Karina’s Sweater by New York hardcore film enthusiast Filmbrain. I shared his love of the Korean New Wave and independent film in general and though I often disagreed with him, I found him to be a reliable source for overlooked relics from the past and great Asian cinema just on the horizon. I also started following Cinephiliac, one of his friend’s blogs. A few years ago they both got excited about something called mumblecore.

The mumblecore movement is a loose net cast over the work of young directors like Andrew Bujalski, Joe Swanberg and Aaron Katz, who make low-budget, small-scope indie films characterized by naturalistic pseudo-improvised dialog, averagy twentyish protagonists and contemporary themes. Filmbrain and Cinephiliac, embroiled in the New York film scene, tended to assume that everyone knew what they were talking about and shared their enthusiasm, but except for some informative work at Greencine and Indiewire, I had little knowledge of or access to the films they discussed. A little while later it became obvious how serious these two were about proselytizing for mumblecore: they founded their own distribution label and have released three mumblecore DVDs.

I was probably wrong to hesitate, but my contrary nature towards hype made me skittish about investigating. By some accounts I’d already missed the boat, as various sources were claiming that mumblecore was already dead or, because some critics are miserly about whom they bestow labels on, that no “movement” had existed at all. Perhaps it’s an inevitable part of the internet era’s flash-in-the-pan mentality that backlash runs only a stride behind every breakout success, even if it occurs within a relatively unknown and self-contained community.

So, much more than a year passed between when I’d first heard the phrase and when I watched my first mumblecore pic. Even then, it was a fortuitous library encounter rather than the steady march of my Netflix queue that put the DVD in my possession. “Funny Ha Ha” (2005), one of the earliest specimens, had finally made it to the Mid-West. [Image: Marnie’s entrance – a fairly poor first impression in which she drunkenly tries to get a Celtic tattoo.]

I was actually a little shocked by “Funny Ha Ha.” I wasn’t expecting it to be nearly so piercing, so accurate and so relevant. On one hand it falls into the historical tradition of realism that includes Poetic Realism, Italian Neorealism (I’m in the midst of catching up on my Rossellini and I can’t resist the comparison), Cinema Verite and the American Indie movement (the most commonly cited influence is John Cassavetes). On the other hand, the realism of the past is the anthropological study of today and I’ve rarely before seen a film which strikes such a note of personal familiarity as “Funny Ha Ha.” I suddenly understood why previous generations have had such deep investments in films like “The Best Years of Our Lives,” “American Graffitti,” “The Return of the Secaucus 7” and “The Big Chill.” I still think of Richard Linklater, Kevin Smith and Noah Baumbach as “my generation,” so it’s a little disconcerting to see films coming out now by people who are actually close to my age.

“Funny Ha Ha” is about recent college graduates vaguely searching for firm ground (nothing new there), primarily focused on Marnie, a 24-year-old woman with no current prospects for career or romance. Working as a temp puts the financial question on the rear burner, but the search for a meaningful relationship is rougher going despite three candidates: recently-single long-time crush Alex, mildly creepy and frequently drunk friend Dave and insecure coworker Mitchell. In the hands of a seasoned television producer this material would induce vomiting, but Bujalski makes it a rambling ode to his generation, cutting straight to the bone. It doesn’t bother him if his depiction is unflattering or unexciting. 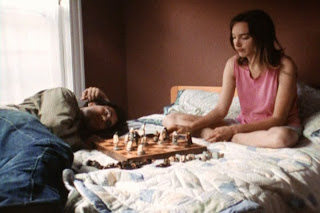 The rickety 16 mm cinematography melts away any potential pretentiousness, playing like a well-edited home video with little better sound or lighting. The costume and makeup are so casual that they hardly registered on my conscious mind, except to note how uncontrived (wrinkled clothing! unkempt hair!) they looked.

However, it’s the dialog that really sits the film down next to you on the living room couch, diner stool or passenger side. It just sounds so painfully like the way people talk today. Bujalski (who also wrote the script) claims that far less of the film is improvised than viewers would expect, an impressive feat if true. He manages to capture everything: the friendly ineloquence and uncertainty, the non-committal stance towards any decision, the self-awareness that fails to diffuse awkwardness, the silly charm of tangential topic-changes, the verbal tics and psychological defense mechanisms. I found the film to be something akin to hearing your voice played back on an answering machine: “Holy crap! I sound like that!”

This brings up some important meta-criticism questions: Do I only like this movie because I can relate to it (a debate that raged after the white middle-aged male film criticism establishment hailed “Sideways” back in 2004) and is it possible for non-demographic viewers to appreciate the film?

To the first question, I must admit that there is definitely bias present. It is rather pleasant, as a viewer, to be addressed in a reasonably intelligent manner and it is refreshing to see a film about college/post-college young adults that doesn’t rely on the usual clique clichés, recycled scenes, stereotypes and melodrama. Yet while “Funny Ha Ha” is not embarrassingly insulting like “Animal House,” “Fast Times at Ridgemont High” and “American Pie,” it also does not ingratiate itself with trendy pop culture references, adorable character quirks and wisecracking charm (which can’t be said of many of my guilty pleasure favorites). What makes the film likable is its adamant adherence to authenticity and unforced affection for everyday moments. The low production values are an asset for its modest goals. 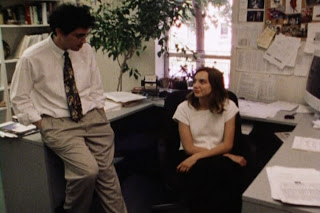 The second question, whether people other than clones of Bujalski’s characters can enjoy the film, is a bit harder. There’s a shared cultural experience in the basic tenor of the film that, to some degree, translates across economic, regional, gender and racial bounds. Most mumblecore members are young white middle-class males, a fact that is often pointed out as an implicit criticism, but which overlooks the fundamental distinctions which occupy their interest: circumstance and personality. Today’s twentysomethings may come from any number of backgrounds divvied up into thousands of subcultures, but the internet, cell phones and a hundred years of accumulated cultural/cinematic baggage has put the developed world aboard the same boat. It makes it that much easier to decode the mumbles.

Still, a generation gap is built into “Funny Ha Ha;” a consequence of immersing up to the eyes in the zeitgeist. There is no way that someone two generations back (or, for that matter, two generations from now) will experience this film in the same way Katie or I experience it. That isn’t to say that they can’t appreciate it: they may find their incomprehension of the millennial kids confirmed or learn to understand them better than they thought. In the same way that I’ve warmed to Italian Neorealism and Cassavettes, critics of all backgrounds may find deeper truths or, at least, an interesting time-capsule.

There’s also a paradoxical rule that applies, often pointed out by my former professor Pier Marton: the more specific the characters, settings and situations, the more universal it ends up.

It may seem like I’m printing a lot of pixels for only having seen one film, but mumblecore now has my attention. You can bet Benten’s inventory thus far, “LOL,” “Dance Party USA” and “Quiet City,” is getting bumped up my queue. Better late than never. 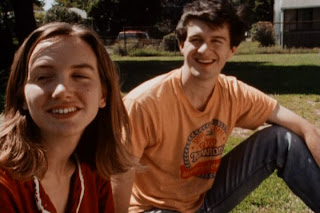 Posted by FilmWalrus at 6:02 PM

I was fixing to leave a long pseudo-intellectual comment, but I've deleted it all in favor of this:

I agree with your review; somehow I was expecting something like the worst of festival-type indie movies, but it impressed me by coming at similar subjects from a bit of a different angle. (Sidenote: "indie" movie that broke the camel's back, probably 'Last Days,' which frustrated me deeply on every account (which I know, it has a budget, is it really indie, blah blah shuttup))

Another thing that we were both into was the writing not being in only once voice, as opposed to our beloved Stillman, Baumbach, and Hartley.

I also liked your off-the-blog suggestion that I should have used the "one must be of one's own time" quote.

"it also does not ingratiate itself with trendy pop culture references, adorable character quirks and wisecracking charm (which can’t be said of many of my guilty pleasure favorites)."

Are you really going there again, John?