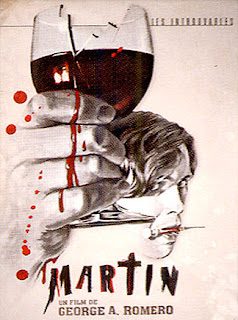 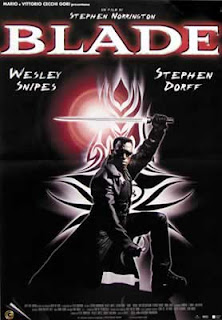 Rank: 4
Title: Blade
Director: Stephen Norrington
Country: USA
Year: 1998
Review:
Wesley Snipes had been acting for more than a decade and had even built a slight reputation as a trained martial arts action hero, but it wasn’t until “Blade” (1998) that he became a household name. Adapted from the comic by Marv Wolfman and Gene Colan, “Blade” is one of the best examples of pure-action vampire filmmaking.
The central character’s history as a dhampir (half-vampire/half-human) daywalker (immunity to UV) is setup in the prologue and positions him as an ideal vampire hunter. His mixture of martial arts (hand-to-hand and armed with the inevitable blade) and Woo-style bullet ballet certainly helps, too. Wesley Snipe’s icy-cool urban hunter overturned the ignominy of dubious blaxploitation crossovers like “Blacula” (1972) and developed a popular African American action hero unlike any seen before (outside the original comic). His well-armed, all-black costumes complete with hip sunglasses modernized the tradition of dark antiheroes and served as an influence for such films as “The Matrix.”
Blade has his work cut out for him exterminating a city-wide infestation of vampires who significantly influence the political and economic spheres from behind the curtain. The so called “Shadow Council” of elite vampire rulers is teetering on the brink of civil war. Ambitious “youngster” Deacon Frost (Stephen Dorff, channeling Kiefer Sutherland from “The Lost Boys”) wishes to explicitly enslave the human race, while the incumbent vampire ruler Elder Dragonetti (Udo Kier) preaches relative restraint. Blade has allies in the form of trusted, crusty weapons expert Abraham Whistler (Kris Kristofferson) and the requisite romantic interest, Doctor Karen Jenson (N'Bushe Wright). Jenson is working on a cure for vampirism and has a bite mark to spur her efforts. Meanwhile Blade sets about making the nighttime safe for human muggers and rapists once again.
Director Stephen Norrington knows how ratchet up the coolness, creating a chilling mirrorworld somewhere between a gothic nightmare and a noir dystopia. The film’s second scene (one of the best), sets the tone by following a bewildered hipster into a secret nightclub that raves inside an industrial meat locker. It all seems like a grand party until the sprinkler system starts spraying animal blood and the dancers turn into vampires. Blade busts in and from there on out, the scene is all intense action. The meticulous sense of place, riveting combat and strong central lead carry the film through later scenes that are a little shaky (including a so-so final battle) and lift the narrative over occasional plot holes.
Followed by two sequels that drop to decent and then to bad. 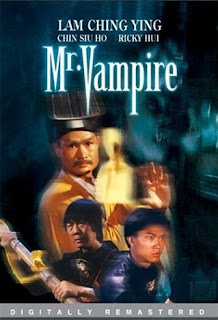 Rank: 3
Title: Mr. Vampire
Director: Ricky Lau
Country: Hong Kong
Year: 1986
Review:
“Mr. Vampire” is considered the seminal example of the “hopping vampire” cycle in Chinese cinema, and it popularized and proliferated Hong Kong action-horror in general. The story rests on the shoulders of two bumbling underlings (a favorite archetype of the nation’s popular cinema) who happen to be acolytes at a Taoist temple. Their elderly master is Kou, a priest blessed with an abundance of mystic trivia, as well as martial art skills. This comes in handy when cheapskate burials result in a wave of angry undead corpses, led by a vampire and joined by a sexy evil spirit with supernatural powers of her own.
Ricky Lau’s refreshing blend of horror, comedy and martial arts is a surefire recipe for mirth-muffins. The fast-paced tale is packed with expert fight sequences and slapstick humor (both showing his skill at split-second timing), always indulging in low-brow revelry, and yet never stooping so low that it sacrifices the characters or narrative. The special effects are so cheese-tastic that they are sure to please 80’s-philes, while the use of canted camera shots, extreme angles and plenty of fog sells the over-the-top style by backing it with genuine talent.
“Mr. Vampire” spawned plenty of sequels and dozens of imitators, including the superior, though sadly vampire-less, “Chinese Ghost Story.” The unusual depiction of hopping vampires is a blend of Western and Buddhist mythologies: in Chinese lore, the dissatisfied dead are possessed by their earth-trapped souls and search for living flesh. Unlike in the Western mythology, they still suffer the indignities of rigor mortis (hence the stiffness and the need to hop without bending the knees). They can even mold and rot! Though not actually the first of the subgenre (the inferior “Encounters of the Spooky Kind” came out in 1981), it is probably the best. 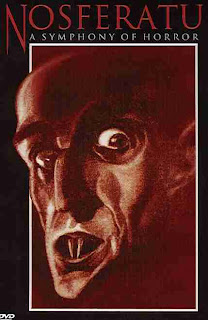 Rank: 2
Title: Nosferatu, Symphony of the Night
Director: F.W. Murnau
Country: Germany
Year: 1922
Review:
Despite being one of, the earliest versions of the Dracula legend, “Nosferatu” remains one of the subgenre’s pinnacles, enduring as a paragon of German Expressionism. Since the production company refused to acquire the rights for the source novel, the screenwriters were forced to get a bit creative with the names and the finer points of the plot. However, the changes work to the picture’s benefit, scrapping the cumbersome epistolary structure, streamlining the cast of characters and writing a superior (and thematically more resonant) ending.
The names vary based on the version, but generally Thomas Hutter is the name of the protagonist, a real estate agent who is helping the creepy Count Orlok move to London. After a sea voyage, an encounter with the superstitious locals and a ride aboard a phantom carriage (that races with impossible speed), Hutter finds himself at Orlok’s castle. There the Count becomes obsessed by a picture of Hutter’s fiancée, and after several attempts to drain the man’s life fluids, he levitates his coffins into a wagon then sets sail for Great Britain. Hutter flees the premises, but loses time recovering in a hospital. Orlok arrives on an empty death barge. His coffins disgorge an army of rats and the Black plague sweeps the city, with victims exhibiting a pair of curious neck marks. Hutter races home, but the only path to salvation bears a bitter toll.
Murnau’s assured direction creates a vividly twisted and macabre environment of utter unnatural terror. The careful choice of mise-en-scene, the fast, harsh editing and the then-impressive special effects make for a mesmerizing vision of gothic malevolence. The tinted versions are particularly effective, but Murnau’s lighting and cinematography is still grippingly in pure black and whites since he choreographs every shadow like other directors would dancers.
Much of the credit also goes to Max Schreck, who gives (to my mind) the definitive vampire performance (certainly the best of the silent era). With his long fingernails, rat-like features and bent spine, his physical appearance instills fear, disgust and pity. His stiff, gangly and insidious movements derives an audience reaction with every gesture; every twitch. The Renfield character is also quite disturbing, effected with all the laughing, hopping and bug-eating that only Expressionism can deliver with such relish. Rank: 1
Title: Valerie and Her Week of Wonders
Director: Jaromil Jireš
Country: Czech Republic
Year: 1970
Review:
Based on the 1935 romantic-surrealist novel of the same title by Czech author Vítězslav Nezval, Jires’s allegorical film shows an immediate intention to plunge deep into the subconscious roots of the vampire mythology. The film follows Valerie (Jaroslava Schallerová), a young girl on the cusp of sexual awakening. She is caught somewhere between the naïve fairy tales of childhood and the unsettling changes of maturity while beset by incestuous vampire phantasms.
Though Valerie’s grandmother and a priest who claims to be her father both make oblique seductions, their motives (lust, blood-thirst, draining-youth, repression, etc.) remain unclear. The girl expresses more curiosity and whimsy than fear and, when her own actions fail to keep her safe, resorts to her cousin and a pair of magical earrings. A chain of shifting identities, surreal images and mystical adventures finally culminates in a transcendent spring-rites picnic.
Visually the film upturns every vampire film convention, using soft focus and an abundance of shimmering light to paint an impressionistic dreamscape of pure whites and colorful pastels. The sets cast an ethereal mood characterized by gentle breezes blowing through cobwebs and curtains, yet remain haunted by a disturbing sexual tension. That neither Jireš nor Valerie seems particularly upset by the oddity and danger in the air forces the audience to view the events as something more than horror and the protagonist as no mere victim.
The experimental cinematography and often surprising camera positions are complimented by the keen sound design. The repetition of signature noises (like the gentle ring of bells when Valerie’s earrings work their magic) and renaissance folk music creates added connotations and connections, ultimately weaving a spell over the audience and seducing them into its otherworldly charm. The film pays tribute to our exhilarating, frightful, inevitable passage into adulthood with the warmth and imagination of a child.
Fans of traditional horror, particularly the blood and guts variety, may have trouble getting into “Valerie and Her Week of Wonders.” For me it remains a personal favorite and a fitting way to end Film Walrus’s week of vampires.
Posted by FilmWalrus at 5:15 PM

I should've expected Valerie to win, but somehow it sideswiped me. I suppose when I saw part of it with you, you weren't all like, "This is the best vampire movie EVER!"

Also, Blade Trinity is worth a Netflix for Parker Posey's bitch-supreme character. And is it just me, or does Kris die in every movie?

Oh I forgot all about Mr. Vampire! You've contributed so much to my cinematic education, and all for the best.

Now, dressed as Death and getting ready for Rocky Horror. Happy Halloween!

Happy Halloween to all of you too! Have a good night. :)