Review of After Life 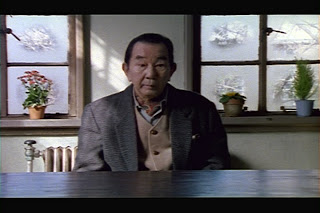 [Image: Hello. You are no longer a member of the living. I’m here to conduct your exit interview.]

Japanese director Koreeda Hirokazu has made a quiet name for himself as a thoughtful, reliable auteur with a gentle, but profound, ability to stir emotions. The stylistic opposite of his contemporary countrymen, Takeshi Kitano and Takashi Miike, Hirokazu is a testament to the variety and creativity of Japanese cinema. I was unfamiliar with the charming director’s work until several months ago, when my East Asian cinema professor David Scott Diffrient (to whom I owe many debts) recommended him.

As of yet, my favorite of Hirokazu’s films has been “After Life” (1998), a sleeper hit with a cute, documentary approach. The premise is that everyone who dies must spend a week at a rest stop before entering heaven. There they meet with special counselors to choose their all-time favorite memory. The staff then puts together low-fi short films of the recollection and replays them at a private theater before the undead viewer passes into the great beyond. They can only keep the single memory as a memento of their corporeal past. 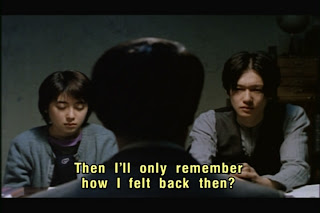 In the cynicism-melting opening, Hirokazu films dozens of actors and real-life citizens about their favorite memories. The range and honesty is fascinating and one can’t help speculating about which stories are scripted (some seem quite unbelievable) and which are spontaneous anecdotes (Hirokazu refuses to tell). The director’s documentary background is easy to recognize, as is his disarming ease with actors and strangers alike.

The movie follows a batch of new arrivals and the four counselors who handle their cases. The misleadingly young Takashi Mochizuki and counselor-in-training Shiori Satonaka get the most attention, as they juggle guiding their assignees and sorting out their own fears, doubts and confusions.

One of my favorite scenes has Shiori listening to a schoolgirl (you remain the age you were when you died) excitingly describing her favorite memory: a roller coaster ride at a theme park. Shiori stares at her with solemn frustration and later takes her aside to explain that she has personally heard half a dozen other girls pick the same experience. The girl thinks about it more, and eventually decides that while the memory was giddy and fun, it has no deeper meaning for her. 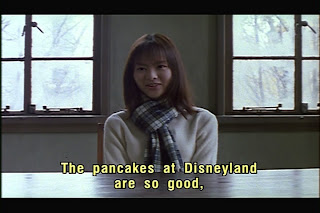 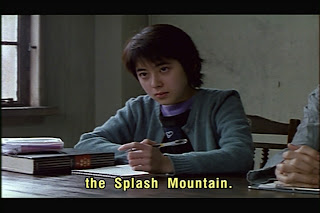 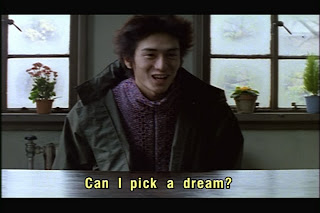 One old lady died after years of struggling with Alzheimer’s disease. Most of her memories are already gone, but she lives happily in a frozen state of her past: when she was five years old and played with carefree abandon. The counselors come to see that they’re job is already done for them. It’s sentimental. It’s also an unabashed fantasy that fails to acknowledge the unglamorous details of mental disease, but it’s touching nevertheless.
The closest thing to an overarching plot comes from an old man who kept a passionless marriage and worked a boring salary job. He’s a nice enough guy, but his personality has eroded to nothing more than humble contentment. His depressing conundrum is that he feels he lacks any noteworthy memory of conspicuous joy, triumph or love. He is allowed to undergo the daunting task of skimming through recordings of his life (from boxes of neatly labeled home VHS tapes!) for a moment to keep through eternity. 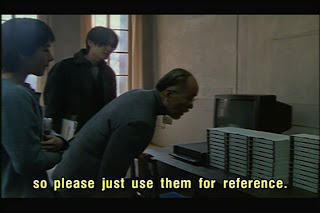 [Image: A lifetime fills a lot of magnetic tape.]
The different reactions are an intellectual and emotional smorgasbord. Some are angry and overwhelmed by the limitation while others are happy to forget most of their lives. Some look back to their childhood while others reflect on their golden years. Some wish to cherish moments of serene love while others want to remember passionate bouts of sex. One poor woman discovers that she has mentally fabricated her favorite memory!

The pacing is very easy-going, and one doesn’t feel that the week-long schedule is put in place just to whip the narrative forward. The acting and setting also match the mood of “regular people, real reactions,” a decision that allows for greater identification, sympathy and warmth. The script is beautiful, walking a fine line realism and imagination and flitting delicately between humor, melancholy, and nostalgia.

The travel lodge is not particularly removed from the mortal plane, and beyond the surrounding woods is the bustle and jostle of the real world. When the characters and camera wander outside, there is a pleasant detached wistfulness. Much of the character development comes from Shiori and Takashi drifting around the premises and looking for film locations and props in the nearby region. The counselors occasionally meet and have candid talks about their job, their own decision to stay behind and the complicated emotions they encounter.
Hirokazu clearly bares traces of the inner romantic poet that got Kurosawa, Ozu and Mizoguchi celebrated as masters of humanism, but he has his own distinct sense of whimsy. The soul-searching characters have plenty of time to pace the corridors at night and often gather their thoughts by staring up through a ceiling window at the moon. At one unobtrusive point in the movie, we see a custodian on the roof nonchalantly replacing one model of the moon with the model for next evening’s lunar phase. Though sometimes dreamy, as the premise would also imply, Hirokazu is mostly down-to-earth. His film doesn’t feature the epic, the grand or the exceptional. What makes him so effective is his clear appreciation, and even respect, for the casual, mundane and quotidian. 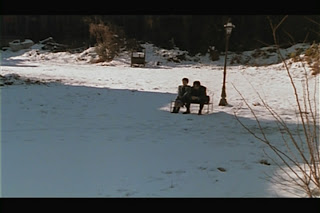 [Image: This bench and lamppost confirm my suspicion that Hirokazu is a hopeless romantic.]

The film has enough range and good sense to do more than just reassure ourselves about the afterlife, but it is a “feel-good” film. The dogma 95 realism keeps the film from having the smug, polished charm of Hollywood rom-coms, but it doesn’t attempt dogma’s provocative extremes either (at least not in the sense of eye-searing discomfort and international controversy). The happy in-between is a recipe for genuine smiles and some truly poignant scenes.
Perhaps the most pleasant part is the shooting of the re-enactments in the film’s final third. The resourceful creativity and low-budget aesthetic (think of “The Science of Sleep (2006)) showcases not only a visual craft often unrevealed in this particular Hirokazu outing, but also demonstrates the director’s basic optimism. His belief in the redemptive power of film to preserve and (we must admit it) embellish our humanity, rings true. It is also thankfully devoid of the tinny taint of self-congratulation. 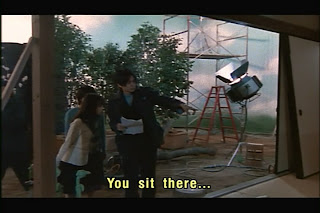 So bring the whole family to this one. It doesn’t walk any sectarian line or try to convert you or impress you with the correctness of its portrayal (a rare feat these days). Rather, it defines a spiritual system for the afterlife that out of sync with any particular religion, and yet not aggressively oppositional to them either. It is more of a topic for meditation than a literal doctrine and it’s certain to have you asking yourself, “What memory would I keep?”
Walrus Rating: 8.5 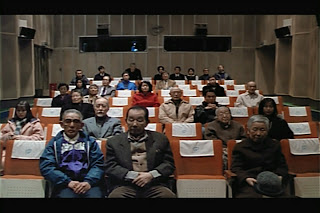 For harder-hitting stuff, try Hirokazu’s “Maborosi” (1995), about a woman unable to overcome the inexplicable suicide of her husband. The vibe is more formalist with a much more typical art-house approach to topics like alienation and psychological trauma. Then there’s “Nobody Knows” (2004), a based-on-real-events story about a mother who abandons her young children to live out a pitiful secret existence in a small apartment. Both of these films are heavier, darker works (and great films in their own rights), but “After Life” provides a softer welcome into Hirokazu’s work.
Posted by FilmWalrus at 10:20 PM

Your comparison to the other directors was right on.

I'm glad we watched it.

Also, I wrote a song about how there is no way to record every memory, since it would take a lifetime to write down every one, and I'm totally going to incorporate your line "a lifetime fills a lot of magnetic tape". That's just too good.

This movie is a great movie.