Last year NoShame released another giallo box set focusing on a director (Emilio Miraglia) that might leave even casual fans of the genre scratching their heads (the other being Luciano Ercoli’s “Death Box Set”). Miraglia was far from a prolific director, but did put out a pair of noteworthy gialli in the height of its glory: “The Night Evelyn Came Out of Her Grave” (1971) and “The Red Queen Kills Seven Times” (1972). NoShame’s impressive box set comes with a “killer queen” action figure making it officially more awesome than the complimentary log that comes with the “Twin Peaks: Special Edition.” I’ll be reviewing “The Red Queen Kills Seven Times” today with a review of the other film to follow at some indefinite future date. 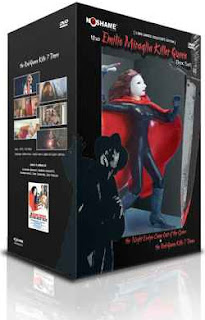 “The Red Queen” is a real winner, and lets you know just how good it will be without wasting any time. The introductory prologue features a little blonde girl (named Kitty Wildenbrück) playing with her doll. Her mean brunette sister, Evelyn Wildenbrück, steals it and runs into their father’s cozy study, within a dwelling that looks like a manor mutated into a castle. There, to the horror of her sister and wheelchair-bound father, she proceeds to stare at a creepy painting of a black queen stabbing a red queen and then stabs the doll repeatedly while screaming “I hate you!” 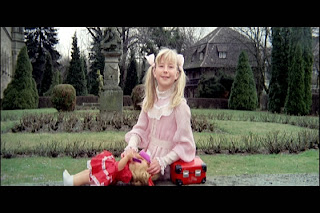 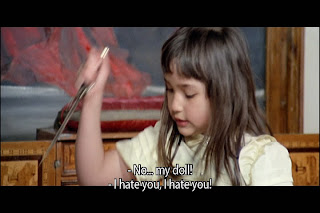 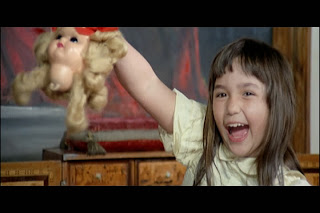 [Image: (bottom) I don’t think this girl is acting…]
The scene so neatly summarizes the whole of the human condition that Miraglia might as well have stopped the film there, but he goes on. The patriarch gathers the two girls onto his paralyzed lap and relates to them the terrible story behind the painting: every 100 years a pair of sisters who are intense rivals undergo a terrible curse. The “black” sister kills the “red” one, only to have the young woman reborn as a vengeful spirit that butchers seven victims, ending with the “black” sister. No worries though; the next iteration of the cycle is more than ten years away. The audience is left to wonder if this seemingly inconsequential backstory may, in fact, be foreshadowing some later event. Hmm… 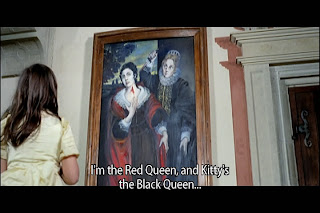 [Image: The dialog subtly helps the viewer to make the connection between the painting and the present day characters.]

The opening credits play as a montage of Evelyn being mean to Kitty establishes, beyond any residual doubt, that a rivalry exists between the two girls. The scenes show Evelyn perpetrating such merciless acts of unadulterated evil as pushing Kitty out of a swing and jumping out of a bush at her. One can sense that a brutal slaying will not be long in coming (at least not in terms of screen time).
Sure enough, a camera cut and a decade+ later Kitty is all grown up (played by the beautiful Barbara Bouchet of “Don’t Torture a Duckling”) and listening to a lawyer execute her father’s will on the very year the curse is supposed to occur. Evelyn is not around, but it turns out that Kitty has another sister named Franszika (Marina Malfatti) who is also getting a piece of the pie. However, the lawyer announces that their father did not want any of the inheritance distributed until a year after his death. 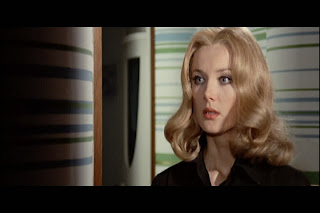 [Image: Barbara Bouchet as adult Kitty]
The two sisters are a little nervous and jumpy, since they are both well aware that Kitty recently killed Evelyn, albeit accidentally. They are even more rattled when Evelyn’s drug-addicted psychotic ex-boyfriend (Fabrizio Moresco, the “giallo Steve Buscemi” who also has a role in “Death Walks at Midnight”) appears from behind a door to demand her whereabouts. 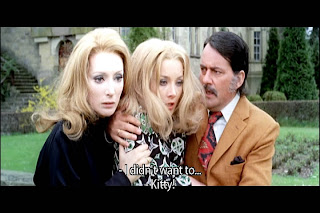 [Image: Kitty “accidental” bashes Evelyn’s skull against a statue and lets the corpse drift down river, witnessed by Franszika and Franszika’s husband, Tobias.]

We soon learn that Kitty and Franszika work in the fashion industry along with their friend’s Rosemary and Lulu (and every other female character in a giallo ever). 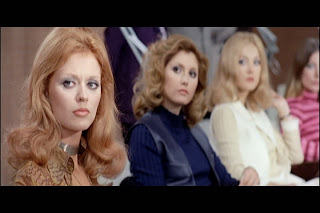 [Image: (from left to right) Lulu, Rosemary, Kitty and a girl who considers a pink-and-purple-striped turtleneck to be the peak of high fashion.]
When a bevy of gorgeous corpses start turning up of people close to Kitty, everyone in the know starts to whisper about the Wildenbrück curse. While I would not normally jump to any conclusions without irrefutable evidence and due process of law, the killer is seen and described as looking exactly like Evelyn in a red queen cape. 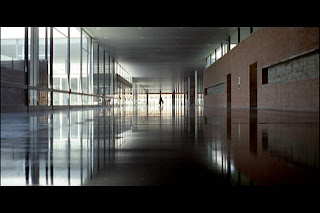 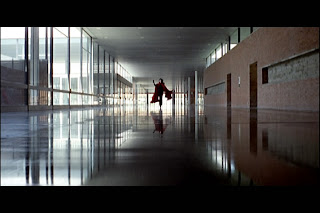 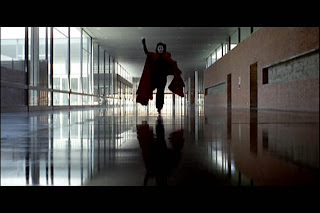 [Images: The red queen (top) fifteen seconds from killing, (middle) eight seconds from killing and (bottom) one second from killing.]
Though the plot might seem pretty cut (heh heh) and dry from the outside, Miraglia has plenty of twists to unleash. He goes on a touch too long with his stream of bloody murders (probably extended just to get the coveted number 7 into the title) and unnecessarily holds back on the delicious plot. However, I felt he kept me ravenous for more as opposed to starving. The tidbits he throws into the audience grow meatier and meatier. Miraglia ultimately manages to complicate and unbalance our expectations, while keeping us engaged and excited. Perhaps his neatest trick, which borders on showboating, occurs when he seemingly unveils the truth in a climatic moment and then immediately trumps it with second revelation a single scene (and less than a minute) later. 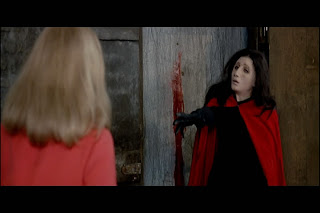 [Image: Could the killer queens be just as much a victim, misunderstood and unloved…?]
Emilio Miraglia’s camerawork and inventive, playful style is enormously entertaining to watch. To a greater extent than Ercoli’s duo of films, which was occasionally carried more by Susan Scotts performance, there is a sense that Miraglia was closer to developing a unique visual style and might have gone on to greater success. His sets feel like a clash between gothic architecture and sixties mod. The Wildenbrück manor broods in dark earth tones and sharp edges (emphasized by a pair of deaths at the hands of a cornice and a wrought-iron gate, respectively), while the interiors and fashion are colorful and curvy, slathered in swaths of trippy stripes. 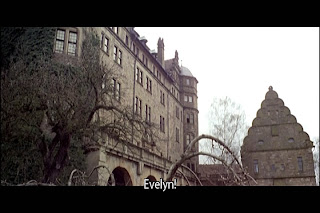 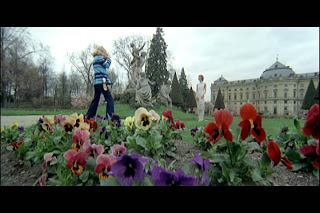 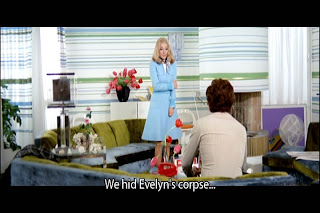 [Images: A continuum that shows the ease with which Miraglia moves between old world and new world sensibilities of design and color theory.]

The fashion is an inextricable element of “Red Queen’s” appeal, indulging in extremes of kitsch rivaled by only a few other giallo. Much of the credit must go to costume designer Lorenzo Baraldi (his credits include “Portrait of a Nude Woman” (1981) which I would think would not have needed his services) who was clearly at least as interested in radical color combinations and dizzying op art as he was in showing off the assets of cast.
And now for a montage: 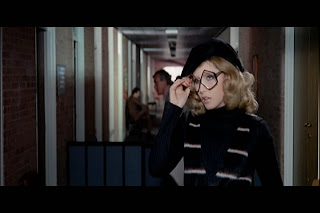 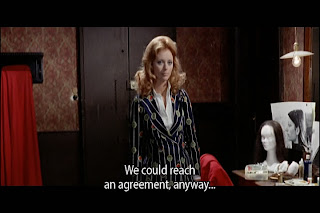 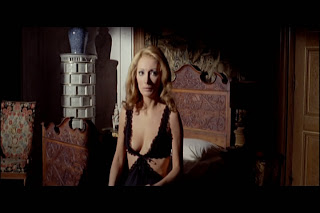 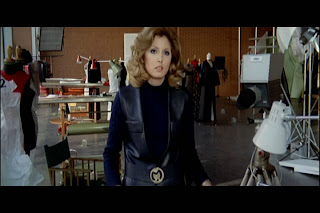 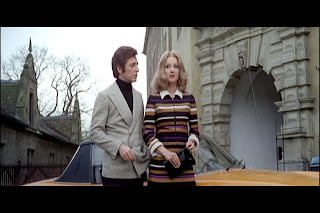 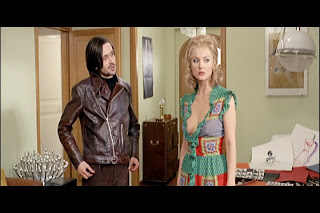 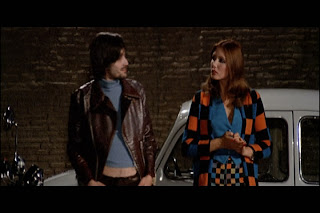 [Image: An admittedly excessive fashion montage. And yes… those are pentagon glasses.]

The dazzling glint of candy-colored plastic, the garish hues of trendy blouses and the bright flash of fashion photography seems to suggest a world of light and freedom bordering on hedonism. Though there is a brief scene of nudity (that occurs with near-comic suddenness), the film relishes clothes far more than skin (it even received a PG rating in the US). Miraglia would seem to suggest that fashion and design is a tool for individuality, assertion and power rather than merely Mulvey’s “to-be-looked-at-ness.” It is interesting to note that almost all the roles of power (and most of the roles in general) belong to women. Even the killer must don the queen’s cape to murder.

Most of the characters are involved in the process of creation and production, with Lulu being the only fulltime model. Lulu is also depicted the most negatively and while her sexuality makes her one of the most exploited characters in the film, she is at least as often the predator as the prey when it comes to relationships.
There are a handful of male roles, most of them rather minor and lacking in agency, including Mr. Wildenbrück (trapped in a wheelchair), Tobias (who limps), Evelyn’s boyfriend (devastated by addiction) and the usual ineffective police officers. Even Martin, Kitty’s fiancé and the presumed male lead, gets scarce screen time. He can’t marry Kitty because he must look after his aggressive, threatening wife, who has been committed to an asylum. Though he puts in some investigative footwork, he is ultimately unable to save Kitty when she needs him most. 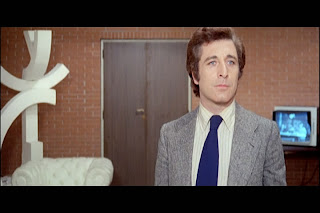 I would suggest that Miraglia does not even set up the central themes of his film in terms of gender opposition. From the outset, he defines the curse (the centerpiece of the plot) as the rivalry of two women. Men only enter into the picture incidentally. The new-found (well, kind of new) freedom of the career girl and her powers of creative expression as both producer and consumer replaces the standard conceit of male heroism, machismo and chivalry.
The villain, then, is really nothing but the remnants of the past; the old world primitivism represented by the medieval architecture, faded paintings and an ancient curse. The thrilling finale even takes place in a flooding tomb (complete with rats pouring from the drains in advance of the water) filled with rot and decay. Then, too, the sisters must contend with the past in another form: their childhood memories and guilty consciences. 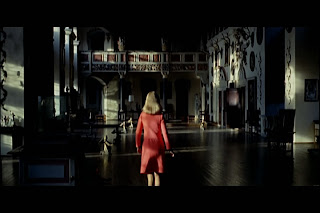 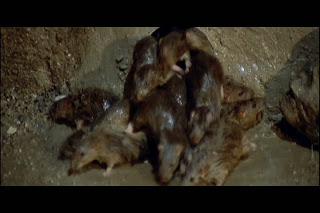 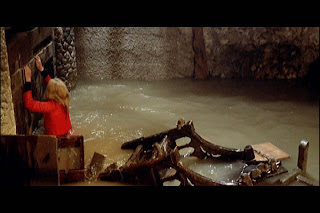 [Images: Kitty, who has not actually donned her symbolic color for most of the film, wears a bold contrast to the dour concluding sets.]

“The Red Queen Kills Seven Times” comes together much better than the average giallo. The director, screenwriter, cinematographer, costume designer and composer (a terrific score by Bruno Nicolai) are all in sync with each other. They create a thriller that looks and sounds as it should with a script that actually works and enough acting chops to pull it off. The film is not particularly scary, and it has more silliness than your average Argento or Fulci flick, but it is also likely to have broader appeal.
Walrus Rating: 8.0 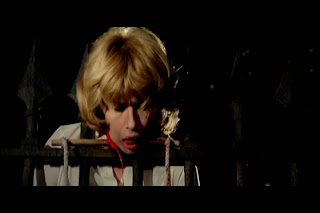 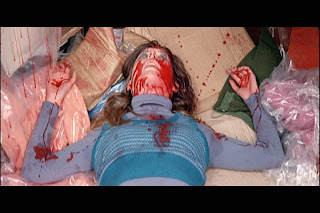 [Images: Well, broader appeal to people who don’t mind shots like these.]
Posted by FilmWalrus at 4:47 PM

The opening of your article made me think of an idea: scenes in movies that make the rest of the movie superfluous.

I've often debating doing a top 100 best openings list, but it can be a little hard. RQK7T is a special case of an opening scene that brilliants substitutes enthusiasm for creativity.