Review of The Saragossa Manuscript

Stumbling upon Wojciech Has’s “The Saragossa Manuscript” (1965) this past weekend (much like the protagonist’s do) was one of those happy accidents that confirms ones faith in trying new things. There is nothing quite like this eclectic Polish art film and yet it fits neatly into the development of modern cinema. It takes its influence from “1001 Arabian Nights” and H. P. Lovecraft (the source novel, however, was written by Jan Potocki long before Lovecraft) and paved the way for the elliptical structures in films by Bunuel and Lynch (“Mulholland Drive” and “Inland Empire” both owe a great debt).

“The Saragossa Manuscript” takes place in Spain, where a soldier seeks refuge in an abandoned house. There he discovers the hefty manuscript from which the story takes its name. So enthralled is he with the illustrations (which include a lobster and lesbians on opposing pages) that he begins to read the book even as cannon fire shakes debris from the roof and the enemy surrounds his position. He is joined by another soldier who declares that one of the stories is about his grandfather. He starts to read it aloud. 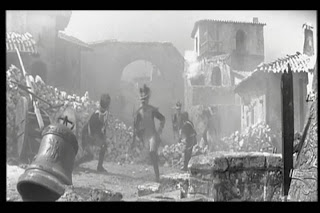 We transition into the life of Alphonse van Worden (Zbigniew Cybulski) a newly appointed captain in the Walloon Guard. He is riding with two gypsy servants through the Sierra Morena Mountains to accept the assignment. Warnings that evil spirits stalk the area fail to breach his brio and he decides to spend the night on haunted ground. 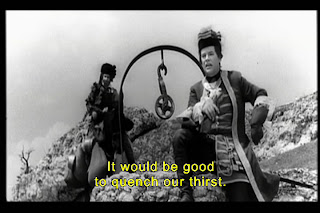 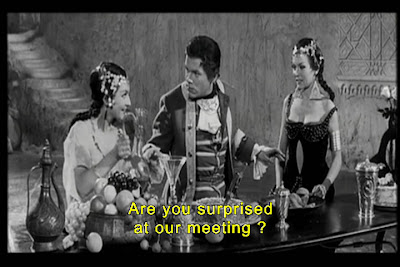 [Image: Zoom in to ogle the sisters’ enormous earings.]
When he wakes up, he is lying near the hanging corpses of two criminals in a field of skulls and destruction. Was it all a dream? As the events begin to repeat themselves in a new variation, Alphonse tries to maintain his courage. Later, when he tries to escape the area, he is captured by the Spanish Inquisition. Will he be ensnared forever within the curse of that benighted land? 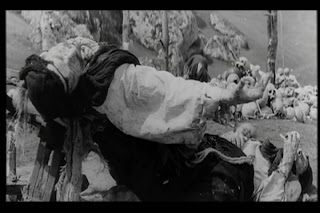 From this minimal introduction, one can not grasp the scope and depth of “The Saragossa Manuscript.” Alphonse’s enigmatic dilemma (is he trapped within a nightmarish scheme by some twisted conspiracy, or within an actual nightmare, or within a dream of a nightmare?) is just the tip of the iceberg. The elliptical plot digresses down multiple paths, creating a dense network of vaguely interconnected stories that branch into other adventures.

By my count, there were two regular flashbacks, two double-nested flashbacks, three triple-nested flashbacks, two quadruple-nested flashbacks and even a quintuple-nested flashback. That’s not even including returns to previously interrupted flashbacks or ones that wind around and meet back into each other. One of the DVD editions comes with a structure diagram to keep track of the plots, something which I found myself recreating to organize my notes. Characters who appear to be the main protagonist fade into framing devices as they tell or listen to some new yarn. Director Has scales up and down the web, sometimes to help us out, or to expand on a theme or to stitch a loose end into the grand tapestry or sometimes just to make things more confusing.
Throughout the movie, the titular tome makes many appearances (despite the fact that the unfolding events are supposedly a part of its long-winded script) and it lurks in the mise-en-scene like a ghostly presence. Perhaps it is the very specter that haunts Alphonse. At one point, the Walloon guardsman almost spoils his own ending by reading its pages and in another instance he is allowed to write in it. 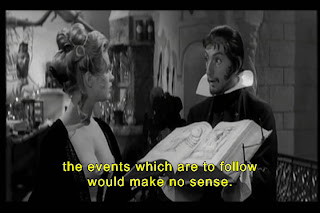 [Image: A scheming Cabalist reprimands his sister for nearly ruining the finale by leaving the book (in which he is currently a character) lying in the open.]

Further complicating the narrative game at play is the asymmetrical configuration. Character’s adventures first take over and dominate our attention solely, but gradually they lose control of their adventure and later appear only irregularly. Some tales conclude neatly while others are left hanging or kept ambiguous. In fact, the soldiers who originally open the book are as trapped as anyone else, since they are locked into reading the subsequent stories and never revisited. And what are we to think about the soldier’s introductory claim that “This story is about my grandfather, Alphonse” considering the way Alphonse’s story ends?
Complimenting this intricate design are visual compositions equally based around depth and layers. Has must have grown up with a strict father who often admonished him frequently, “Young Wojciech, even if you are filming a sprawling landscape, always keep something in the foreground to balance the shot.” The effect helps keep the film visually interesting, aided by Mieczyslaw Jahoda’s crisp B/W cinematography and a restless, wandering camera that seems to glide effortlessly through the interconnected tales. 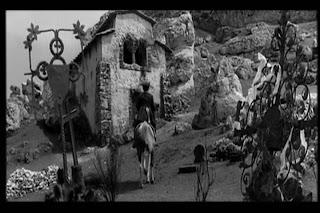 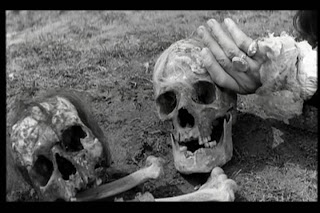 Ultimately “The Saragossa Manuscript” is one of those avant-garde puzzle box films that I’m extremely fond of, but also a bold, unabashed celebration of the storytelling art. Many people will give up within the first third of the film, but others will stick it all the way through, alternating between clapping their hands and scratching their skulls.
Walrus Rating: 9.5
Posted by FilmWalrus at 6:33 PM

I might steal your skull-and-bones screenshot for wallpaper. It totally rules.

There is a third alternative also

Its a site made to accompany the reissue of the film on DVD in the UK where many of its hidden treasures and mysteries are explained.