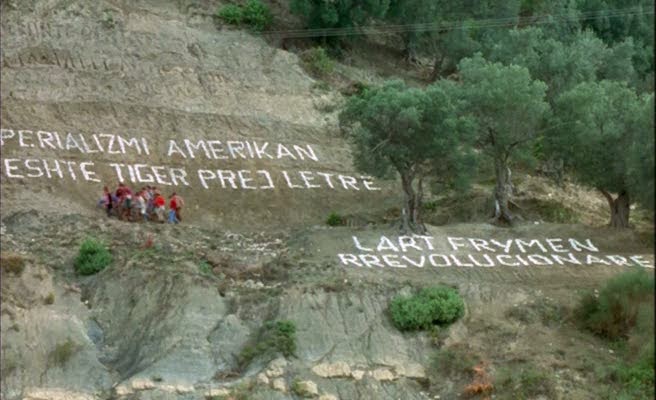 Country: Albania
Title: Slogans / Parullat (2001)
Andrea, a biology teacher, is sent to a secluded schoolhouse only accessible by a series of winding mountain roads during the waning throes of Hoxhaism (an extremist flavor of Marxism named after Albania’s long-serving dictator Enver Hoxha). Upon arrival he is mystified by the strange significance that everyone places on his choice of slogans. Diana, the school’s French teacher, angrily explodes after his selection, but his classroom of children, unwilling to begin their first lesson until Andrea shares his answer, are overjoyed by its brevity. It turns out that each class must spell out the slogans by arranging whitewashed rocks into giant letter on the neighboring mountain slopes for the benefit of the infrequently passing drivers. The task is tedious, laborious and pointless (the phrases, for example “American Imperialism is a Paper Tiger,” mean nothing to the villagers, many of whom are illiterate anyway), but since it is the town’s sole mark of distinction within the regional communist party, it has become the central fixation of the school and a tool for the principal’s petty manipulations and private grudges. 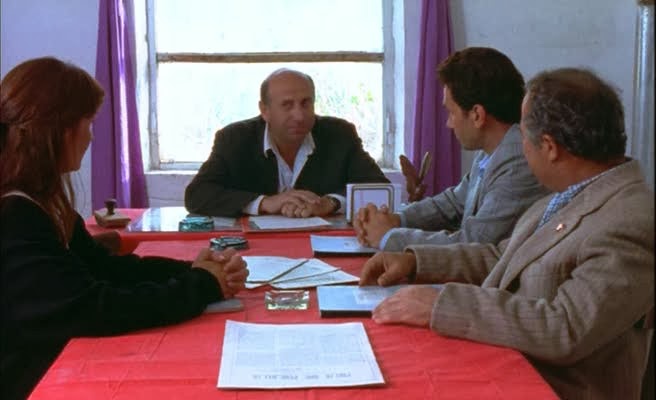 Andrea, keeping his wry disdain to himself, submits to the empty ritual while making friends with Diana, the children and their parents, including a simple-minded goatherd. The latter man’s animals accidentally trample a slogan and he is jailed by a vindictive crank. The most far-flung of the local farmers gets in trouble for a slogan cheering Vietnam to victory which, unbeknownst to him, is ten years obsolete. Andrea and Diana enter into a romantic relationship but they are exposed by jealous rivals. Andrea is sentenced to hard labor for, among other crimes, failing to clap enthusiastically enough when a party official drives by, a much anticipated and loudly heralded event that provides the film’s mordant anti-climax. 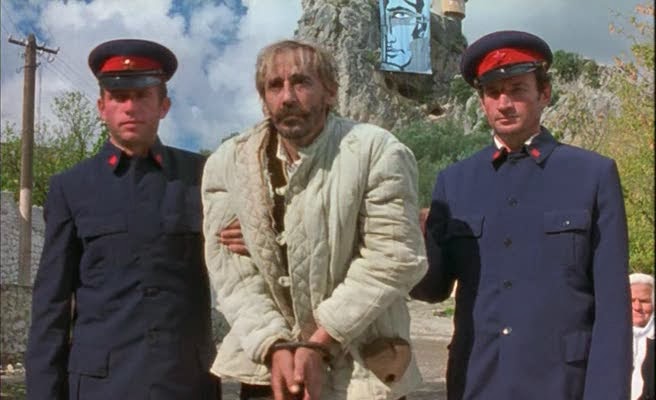 If you’ve ever been forced to endure ideological drudgery, whether it’s reciting or rewriting a school rule, a religious catechism or a corporate mission statement, you’ll appreciate what Slogans is about. But Slogans is, fortunately, a much more extreme example than most of us will ever encounter. It’s somewhat reminiscent of other normal-person-arrives-in-deranged-town movies (The Wicker Man, Wake to Fright, Who Can Kill a Child?), but with the focus placed on the tyranny of the small-minded and use of repetitive, menial labor as a mechanism for brainwashing. It understands that the terror of life under a corrupt government isn’t always the direct threat of violence so much as the insinuating passive-aggressive exercise of authority, the combination of strict rules with arbitrary enforcement and the soul-destroying reiteration of your own powerlessness. In this way, the stone mottos aren’t effective propaganda because of what they say or even because of their overbearing size, but because making someone spend time and energy constructing them tricks the person into taking the idea of slogans seriously. It introduces that first token act of obedience, even if it’s just to avoid unnecessary conflict, which allows a person to begin accepting their own oppression. Andrea is ultimately a victim of this dehumanizing process. He is an interesting character because, though he is handsome and likable and we root for his romance and his positive influence on the students, he’s no rebel and no hero. His knowing smile and good intentions aren’t enough to fight the system. Ultimately he finds it easier to submit. While this makes Slogans a rather depressing, down-tempo, anti-inspirational film, it’s probably one of the more honest portrayals of the average person’s experience under dictatorship. 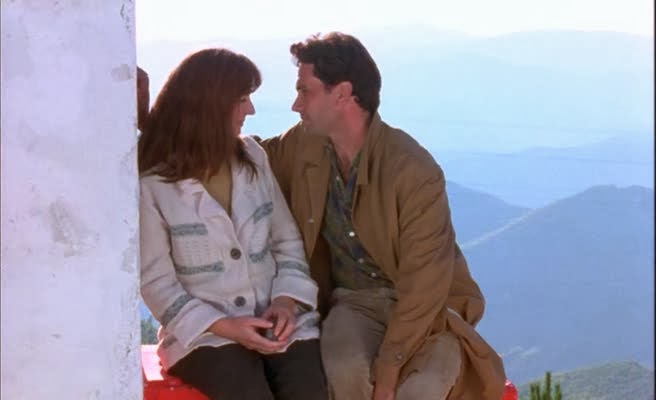 My Favorites:
Slogans
The Forgiveness of Blood
Posted by FilmWalrus at 10:30 AM