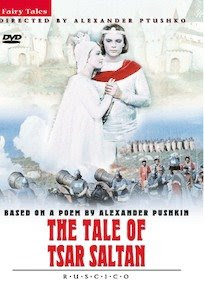 Here’s some of my mental diary entries from a couple of days ago:
00:00:00 I put my latest Netflix disc into my DVD player and take my seat.
00:00:18 The DVD menu appears (in Russian) and I become immediately aware that I have accidently requested the wrong movie.
00:00:40 After getting the menu to show up in English I decide I’ll give the movie a chance anyway. Otherwise, I will no longer have an excuse not to get some chores done around the apartment.
00:01:30 Movie begins. No subtitle options. I set the audio to English. Three women (sisters?) start speaking in terrible dubbed rhymes. I reconsider previous decision.
00:08:00 Strange little troll creatures appear and start attacking a medieval kingdom. I’m starting to kind of like the movie.
00:15:00 I’m totally drawn into the strange Soviet-era fairy-tale that is unfolding and quite honestly impressed by some of the special effects and visual design efforts. I’m learning to stomach the awful poetry translation.
00:82:00 Movie ends. Evening deemed a success.

So that’s how I came to see “The Tale of Tsar Saltan” (1966) by Russia’s cinematic wizard Aleksandr Ptushko. I didn’t recognize his name at first, but I’ve actually been looking for his groundbreaking puppet film “The New Gulliver” (1935) for quite some time (if anyone knows where I can buy a subtitled version, please let me know). I’d also seen one of his lesser films on MST3K, but don’t hold that against him. Despite my lack of real familiarity, I’m thinking Ptushko is definitely a director worth knowing.

“The Tale of Tsar Saltan” starts out in typical fairy-tale fashion with a humble maiden getting wed to the Tsar and her two jealous sisters plotting to make the marriage as brief as possible. While Tsar Saltan is out fighting armies of pygmy trolls, his wife gives birth to their son Gvidon. The villains do some creative editing on their correspondences and make it appear that Saltan wants his family sealed in a barrel and dropped to the bottom of the sea. Despondent, but blindly obedient, his vassals do the deed.

But wait! The Tsarina’s beseeches the sea to spare her and they wash up on an empty island with only a single tree. Her fast-growing son has already become a full-grown man, and he rescues a swan who helps make him king of a frozen city full of domes and spires. He lives in great wealth due to a singing squirrel who procures golden emerald-filled nuts, but he continues to feel that something is missing. It isn’t a private army of amphibious giants or a beautiful wife with a precious gem shining from her forehead. Those help, sure, but it’s a chance to meet his father that brings about the ballet finale.

This plot felt mighty odd to me, but it certainly beat watching another uninspired Cinderella adaptation and Ptushko makes it more exhilarating still through his knack for fantastic use of color and magical imagery. I’m wondering if Russian filmgoers would have been so familiar with the story that they wouldn’t have been as dumbfounded by it (can someone from Russia answer that?), but I really enjoyed being in the state of I-have-no-idea-what-crazy-twist-is-coming-next for pretty much the whole duration.

The story does have some flaws, particularly the use of fairy-tale repetition and cardboard characters. The acting is pretty theatrical, with only Larisa Golubkina (as the Tsarina) excelling, which is actually especially impressive since she is really only required to be modest and pretty. The writing can also be pretty painful, though I’m sure in Russian the original 1831 poem by Aleksandr Pushkin’s is considerably more respectable. Translating across languages while trying to maintain the rhyme scheme and match lip movements is doubtlessly a nigh-impossible task, but I think they could have outdone “I’m going to go walk over there / and see if I can hunt a hare” (he then kills a bird of prey) or “Why, O Prince, are you so sad / When on this day you should be glad?”

But I need to get on to the real point of “The Tale of Tsar Saltan,” which is the presentation. Everything is just so ambitious and clever and gorgeous. The costumes are bold and shiny, with the distinctive trolls making a fine contrast. I’m not quite sure how Ptushko made them so short (midgets? children? actors bent forward with their elbows on their knees?), but they’re so darn adorably evil. When he brings in the giants he mostly relies on forced perspective (much the same way Peter Jackson did to make his Hobbits appear so short), with many of the set pieces rivaling Karel Zeman for technical challenge. In one scene where the giants attack a ship, he cuts between two versions: one with a regular-size ship and forced-perspective giants and another with regular-size giants a smaller replica of the ship populated by children wearing the costumes (and conveniently not facing the camera).

The puppetry used for the singing and dancing squirrel is rather silly (expect a smidgeon of similarly head-shaking Soviet sight-gags throughout), but otherwise the island kingdoms are magnificent. The huge-looking cityscapes are accomplished by using sets that run seamlessly into impeccable murals. Gvidon’s tour of the silent city, complete with flash-frozen running children, spouting fountains and a dove flying from a tree of crystal apples, is an unforgettable sequence.

Even though it’s often easy to see through the special effects, I don’t consider their datedness to be a bad thing. One can easily sit back and suspend disbelief or admire the amount of craft that went into them. I’d suspect that modern viewers, especially kid weaned on CG, may find the innovative tricks quite charming and well fitted to the story.

I only wish I could show you some screenshots. The sketchy DVD wasn’t recognized by my computer, so you’ll have to use your imagination. You can also check out some of the artwork by Ivan Bilibin that inspired Pushko’s adaptation here. 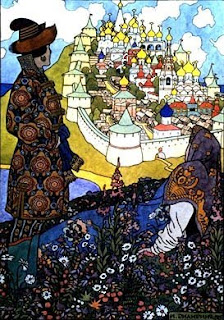 Anyone with a taste for fantasy should give this a chance. Preferably, find a copy better than the one I watched. “The Tale of Tsar Saltan” isn’t likely to ever get as much attention as “The Thief of Bagdad,” “The Wizard of Oz” or “The Neverending Story,” but it does deserve more than its measly 59 votes. I only wish I’d watched it on purpose.

Translation is indeed a problem. I'm sure subtitles would have been equally odious, if slightly less obtrusive. Sounds brilliant otherwise, though.

Accidental movie-watching at its finest!

Some people are really distracted by this combination, but I like having a literal translation in subtitles and, if dubbed also, a rhyming dub. Usually the two sides of my brain can process the disjunction without much trouble.

Alright, this comment is really belated, but still: I love it when Russian and Soviet classics get some appreciation! For all the awful things there were in the Soviet Union, it did give us a generation of brilliant directors and actors. By the way, if you liked Larisa Golubkina, I would heartily recommend the movie she is best known for: Hussar Ballad (1962). She plays an awesome warrior girl who masquerades as a young man to go to war but sometimes puts on a silly society beauty act to troll her betrothed – and she really has a chance to show her acting talent.