Iceberg Arena: The Ten Lives of Cartoon Cats Part I

This is the first part of a three part series counting down the best animated cat movies I’ve seen. The final part will feature canine and rodent cinema.

I grew up in a relatively large family and there were always pets around in case human companionship wasn’t enough. At one time or another we had fish, toads, lizards, crabs, hamsters, guinea pigs, cats (always more than one), dogs and even horses. Having experienced some breadth of the animal kingdom, I can say definitely that cats are superior to dogs. While I’d love to go into a great deal of discussion to prove this case, the internet has already done that for me.

Cinema has been rather kind to kittens over the years, featuring them frequently as minor characters, especially in horror movies where their noisome mischief often tricks the audience into thinking the killer is nearby (yes, a list of cat scares is pending). In real life, I find that it usually just means that my cat, Claws Kinski, has knocked something over in the kitchen and I have to go clean it up.

Kinski has, by and large, been less kind to cinema. She tends to ignore whatever I’m watching in favor of falling asleep or glaring across the room at me. Her reviews are only slightly less harsh Vincent Canby’s.

Less often are cats are given their due in starring roles. When they are, it tends to be in animated films where schedules and performances don’t have to rely on their admitted fussiness and fickleness. These cartoon cats are the topic of today’s Iceberg Arena Battle Royale, pitting ten animated feline flicks against each other.

I could have done a straight up top ten list, but that would imply that I actually liked all the films on the list (I’d give two of them a remorseless thumbs down) and that I’d seen more than ten (which is technically true if you include “The Lion King,” but I’m sticking to domestic cats). So instead I broke up my list and reviews into a three part Iceberg Arena, where one animated cat movie is eliminated at a time until a single winner remains. 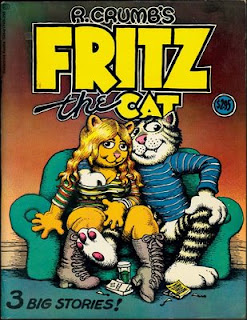 Fritz the Cat shocked audiences in 1972 as the first X-rated animated theatrical feature. It tells of the ramblingly adventures of Fritz, a smug chauvinistic thug on the prowl for pussies across a crime-strewn USA. Fritz is cynical, exploitive and selfish, but hardly the worst element in this pessimistic satire of the turbulent 1960’s that’s filled with explicit sex, violence, bigotry and depravity. As is often the case with shock cinema, the message is confused by the inability to tell whether the film is reveling in or reviling its subject matter. The drama never manages the energy of the Angry Young Man movement from which it tears a page, while the comedy can’t get far enough past juvenile locker-room humor to effectively skewer American culture. Even Robert Crumb, writer of the source comic, disavowed the picture.

Director Ralph Bakshi may be the most important name in American independent animation, but he’s probably one of my all-time least-favorite directors. His animation is bottom of the barrel, but his intentionally grimy coloring and skill at exaggeration and grotesquerie does make for a unique and original style. His later films would repeat the formula ad nauseam and mix in ugly live-action footage to patch over the holes, never with much success. With Fritz, at least, he blazed a trail for other indie animators to follow. 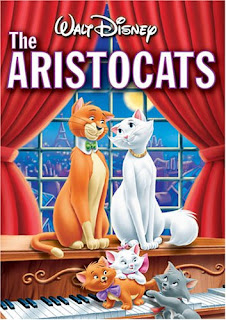 The threadbare plot of The Aristocats involves a wealthy old lady who plans to will her estate and fortune to her beloved cats, much to the dismay of her long-suffering butler Edgar. The scheming manservant slips the cats a milk mickey, scoops them into a sack and sets off to chuck them off a bridge. It really pretty grim for a Disney film, but the actually fate Edgar has planned is never clear, as he’s interrupted and the prisoners escape. The pampered cats are taken in by O’Malley the alley cat and are introduced to Paris’s bohemian scene through Scat Cat and his band of feline swingers before they return home for a predictable showdown.

It’s uncommon for even Disney to just “go through the motions” as overtly as they did with Aristocats, slapping together a boring, mechanical family feature whose premise (a musical comedy about cats in Paris) and best ideas were stolen from “Gay Purr-ee” (see #7). Nearly every aspect is bungled, especially the hokey voice-acting and the forgettable music, headlined by the anti-climactic “Everybody Wants to Be a Cat”. The sigh-inducing comic relief, which features two elderly dogs and a pair of old-maid geese (for a kid’s movie, a major portion of the supporting cast is geriatric), consumes half the film in place of plot and character development. The only really standout element is the animation, especially the beautiful background images of Paris. 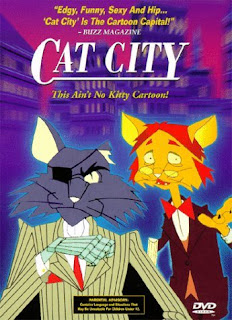 I mentioned “Cat City” when I rambled about Hungarian animation, and although I don’t consider it a great example, it’s still quite a bit of fun. A secret agent mouse (alright, so this maybe should’ve been counted as a mouse movie) must visit a cell of his organization in Japan to obtain a secret weapon to fight off the growing influence of the cat mafia. Along the way he outwits a whole litter of whiskered assassins who’ve rented a futuristic car for the chase. The maze of surprises and plot developments that ensue would exhaust even a lab rat.

Despite being a smash hit in Hungary and the USSR, “Cat City” never got significant play in the states, largely because of its language-based puns and references to Hungarian culture. Still, much of the humor is broad enough to be understood internationally, drawing from easily recognizable tropes like parody (James Bond in particular), cartoon violence and bumbling villains, but with a streak of more adult humor that parents might want to watch out for. The animation is probably the biggest weak point, with the style feeling dated and rushed. 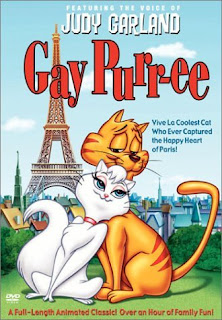 7. Gay Purr-ee (1962)
Eight years before the Disney clone, UPA made this charming musical featuring the voice of Judy Garland as Mewsette, a housecat from the French province of Provence who is seduced by the luxuries of the Parisian leisure class. Her countrified mouse-nabbing suitor, Jaune Tom, and his boyish pal Robespierre head out in hot pursuit. They’re reunion is repeatedly foiled by Meowrice, a con artist who trains Mewsette My-Fair-Lady-style as a mail-order bride while shanghaiing the men on a ship bound for the Klondike gold rush.

UPA’s signature limited animation isn’t going to appeal to everyone, especially since it can dip a little close to Saturday morning cartoon quality. Chuck Jones’s influence is clear in the exultant bold colors and comic lack of realism, as well as the many references to high-culture literature and art (including a fabulous montage of famous paintings reimagined to star felines), not to mention cinema. Ultimately the plot remains pretty uninspired, but the music and design work still stand up. 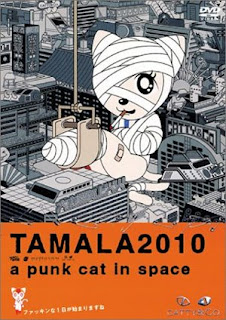 This ambitious project by a two-man Japanese team follows the adventures of Tamala, an immature, foul-mouthed female cat searching the Orion constellation for her real mother in a cyberpunk future. She is stranded on a planet where the friction between cats and dogs is exploding into riots and killing sprees. Through dream sequences and museum visits she gradually awakens to her origins as an immortal corporate mascot and vengeful reincarnation of the goddess Minerva. While still unaware of her destiny, she strikes up a brief relationship with Michelangelo, who is traumatized by her apparent death and rebirth.

Gutsy, original and unconstrained by tradition, co-creators “the trees of life” construct one of the most odd and ambiguous cat cartoon yet made. The jerry-built plot bites off more than it can chew with an outline modeled after Pynchon’s postmodern tome “The Crying of Lot 49,” a tense corporate setting not far from Gibson’s “Neuromancer” and inflections from Roman mythology and modern feminism, yet I can’t help applaud the effort. The isometric black-and-white animation has a retro videogame look that feels comfortably synchronized with the bizarre mishmash of ancient, modern and futuristic iconography.
To be continued...
Posted by FilmWalrus at 8:00 PM

The second I saw the title of this article, I said to myself, "Oh god, he's gonna diss Fritz the Cat."

And CHRIST, I wanna see Tamala soooo bad. I first heard about it in a Newtype USA article about six or seven years ago and constantly wished for a U.S. release. :c