A while back I had the pleasure of enjoying my first Hungarian animation and wrote about it in a review of “Son of the White Mare” (1980). Since then I’ve had some time to watch more and I’ve concluded that Hungarian feature animation, much like Estonian short animation, is one of those well-kept secrets that have been criminally overlooked.

Hungarian animation hit the big screen for the first time in 1973 with “Johnny Corncob” (“Janos Vitez”) by director Marcell Jankovics. It is based on the 19th century Hungarian epic poem of the same name, and follows a brave shepherd who joins the Hussars, rescues France and returns home to find his beloved sweetheart dead. Unperturbed, he sets out on a series of perilous quests knowing that his only chance to be reunited with his love may lie in death. With its jaunty tunes, dazzlingly imaginative visuals and Munchausen-esque exaggeration (at one point he scales a mountain so high he is scorched by the sun), “Johnny Corncob” marks an impressive debut. Jankovic would later go on to make his masterpiece, “Son of the White Mare.” 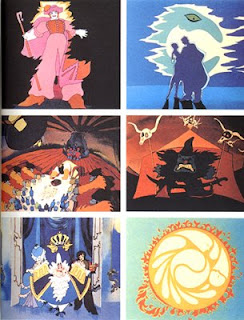 The 1970’s and 1980’s marked the heyday of Hungarian animation led by the PannoniaFilm studio (who also did the animation for Rene Laloux’s second film, “Time Masters”). In 1986 they released Hungary’s most famous film, “Cat City,” a secret agent parody about a cat-mouse cold war. Hungary’s most popular film, “Vuk” (1981), A Disney-style anthropomorphized-animals family film, dubbed into English as “The Little Foxes,” remains a national favorite. 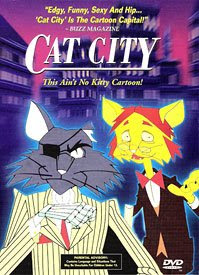 While “Vuk” frequently tops the IMDB’s voter-ranked top 50 animated films list (“Cat City” also appears), it lacks the creativity and originality of Jankovics’ work and was not one of my favorites. The artwork peaks in the opening 15 seconds, with a magnificent stop-motion sequence of a watercolor painting soaking in. I found these watercolor backgrounds substantially more compelling than the foxes themselves, though the story is notably more sincere than most Disney/Dreamworks tales. 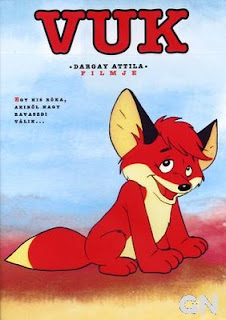 Perhaps the biggest obstacle to Western viewers is Hungarian humor, which is highly contingent on untranslatable wordplay. I found this to be a major issue in fully appreciating “Cat City” (though it’s still quite funny) and to a lesser extent the comedic geese in “Vuk” and the lyrics in “Johnny Corncob.” Ultimately, I tend to prefer the films with the more stylized visuals over the ones lauded for their scripts.

In the 1990’s Hungarian animation more or less disappeared before steadily mounted a comeback. The most recent Hungarian animation I’ve seen is “The District” (2004), a rambunctious take-no-prisoners anarchic comedy that successfully toured the festival circuits. The plot involves children of rival ethnic gangs who travel back in time, slaughter mammoth herds and bury them under the primitive city square so that they can be oil barons in the present. The low-budget CG uses an inspired technique that crudely swaps hundreds of mugshots to animate character expressions. The 2D look, along with the politically incorrect and rabidly satiric content drew comparisons to South Park. 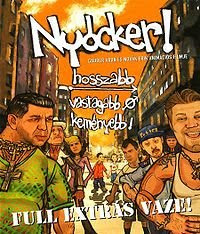 [Image: "The District" or "Nyocker" in the native Hungarian.]

Perhaps the trippiest of Hungarian animations, and to my mind one of the most charming, is “Hugo the Hippo” (1973). I’ll give it a full review in the next post.
Posted by FilmWalrus at 9:08 PM

I am shocked. I'm Hungarian and I grew up on these stories (and even more), and I cannot completely express my surprise that someone not Hungarian actually ever heard about them, let alone even liked them! I'm really happy that it's the case, I know that sometimes it's hard to understand the underlying symbolism for a foreigner, and thus these can seem quite surreal. I just rewatched János Vitéz, so weird watching it as an adult! Anyway thank you for this blog, it's really amazing (I will spend more time reading the whole of it) and honestly it feels really good that someone is interseted in our culture and others. :)
Have you seen Ludas Matyi perhaps? not sure if it was ever translated, but that's another very famous animation. Maybe not for the visual effects but the storyline is amazing again with a lot of references. Also there are a lot more, if you are intersted I could look into it to see which one has a translation

I've really enjoyed all the Hungarian animation I've been able to find. It was almost an accident that I got into them, but I think they'd be pretty popular in the US if more people knew about their existence. It is just too bad some of the puns are hard to translate :)

Thank you for recommending Ludas Matyi. I was able to find a copy with English subtitles and hopefully will have some time to sit down and watch it soon. Let me know if you remember and other Hungarian works you would recommend (animated or otherwise).

Enormous blog you individuals have web design agencies made there, I entirely appreciate the work.

Awesome work! That is quite appreciated. I hope you’ll get more success.
web app designers