Review of The House with the Yellow Carpet 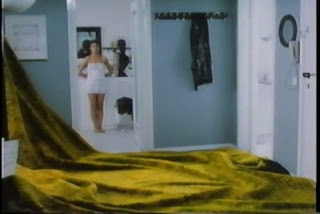 With a title like “The House with the Yellow Carpet” (1983), you know right off that bat that you’re watching a giallo. Not only is the movie clearly trying to cash in on the precedents of “The House with the Laughing Windows” (1976) and “The House by the Cemetery” (1981), but this particular variation actually includes the genre (which just means “Yellow”) in its original Italian: “La Casa del tappeto giallo.” Director Carlo Lizzani was probably eager to build in an audience, since he certainly didn’t have name recognition or marketing clout.

Then, too, Lizzani was riding pretty far back on the coattails of the giallo heyday and had an even smaller budget than the meager rations doled out to other Italian B-movies. So it’s not surprising that his film, adapted from the two-act one-room play “Theater at Home,” has as much in common with dialogue-intensive American mysteries like “Sleuth” (1972) and “Deathtrap” (1982) as it does with Argento and Martino’s more ambitious thrillers. 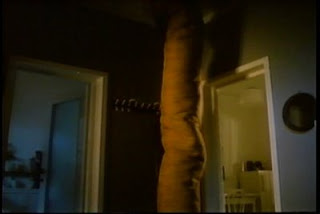 [Image: The menacing yellow carpet falls toward the camera to get the film started.]

Lizzani’s single set, at least, is unique and handled well. Though not terribly interesting in itself (it suits the screenplay to forego the usual pop-art décor for a more toned-down modernism), he shoots it in cool shades of blue and white, perpetually a little underlit, to give it an unwelcoming air. It also serves to set off the titular prop, a vivid yellow Persian carpet that, we are inexplicably told, “brings out bloodstains.” In the absence of any other dominant color, the carpet becomes a conspicuously powerful focal point and ultimately a lurid symbol of unfulfilled incestuous desire and paranoid murderous madness. Yay! 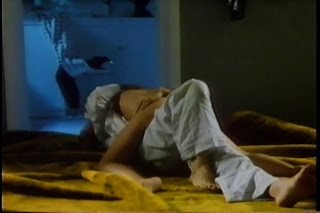 [Image: The director is not above using blue lighting, an unusual choice for a sex scene, to make the carpet stand out more.]

The apartment’s two occupants, Antonio and his wife Franca, received the carpet from her step-father on their wedding. Since their apartment is too small for it, they are trying to sell it. Antonio has to step out to stop his car from being towed away right as the prospective buyer, listed in the credits as “The Professor,” arrives to negotiate a price. He turns out to be a creepy, manipulative compulsive-liar whose story changes a dozen times in the course of a deadly game of cat-and-mouse that Franca is forced to play. 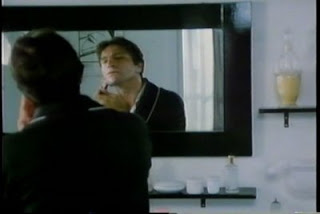 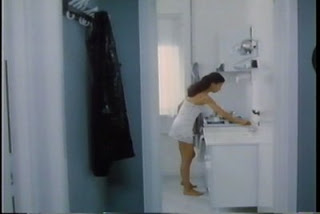 [Images: Antonio and Franca go through their morning routine oblivious to what the coming day has in store for them. Despite the apartment being rather cramped, Lizzani stages them so that they cross on separate planes and are almost never in the same room together. Their lack of physical intimacy, compared to the night before, foreshadows Antonio’s absence and potential guilt throughout most of the first act.]

Trying to figure out exactly what the professor is up to is the primary fun of “The House with the Yellow Carpet.” Giallo-veterans will definitely appreciate how contrived it gets (otherwise it would be too easy for them), but most others will be pounding their heads against the walls and screaming that it’s all nonsense (they’re mostly right). 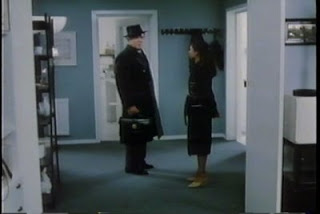 But what makes the effort so worthwhile is Erland Josephson’s performance as the enigmatic professor. Josephson is about 3000 notches above the material, but clearly enjoys the chance to slum around a bit. His two previous films, Andrei Tarkovsky’s “Nostalgia” (1983) and Ingmar Bergman’s “Fanny and Alexander” (1982) are towering achievements that are ranked amongst the finest classics of European art cinema. Next to Max von Sydow, he was Bergman’s favorite male actor and turned in beautiful, restrained performances in many of his masterpieces like “Cries and Whispers” (1972) and “Scenes from  a Marriage” (1973). In “Yellow Carpet” he cackles about killing his family, tortures a scantily-clad housewife with a knife and injects illicit drugs directly into his eye sockets. Frankly, it’s kind of awesome. 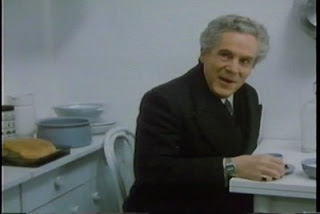 [Image: Erland Josephson, demonstrating that critics never gave him his due amongst cinema’s great sadomasochistic loonies.]

And, or course, it’s all part of some twisted mind game that only the screenwriter, if anyone, really understands. At first, when the professor claims he saw Antonio secretly meeting another woman when they passed on the stairs, we’re almost inclined to believe him. But the longer he chatters on about spending fifteen years in prison, being friends with Franca’s step-father, colluding with Antonio to kill her for money, and so on, the more we realize he’s as crazy as whatever plot he’s up to. I won’t spoil whether he’s an eccentric carpet buyer, an assassin, a madman, a professor, an actor or a psychiatrist (all of which are proposed), but neither will I promise that by the end it will necessarily be all that clear-cut anyway. At least it does sort of have something to do with the carpet, unlike anything mentioned in the titles of most giallo.

The dialog has that giallo-feel where everyone seems enormously suspicious no matter how casual the topic of conversation. Take for instance, this exchange after Franca takes a 5 second phone call from a prospective carpet buyer: 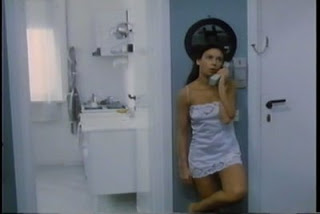 Husband: “What type of voice did the caller have?”

Husband: “What do you mean an ordinary voice?”

Wife: “Just a voice, that’s all. Beside the connection was bad. I couldn’t hear very well.”

Wife: “A Man. He sounded odd. Sort of ironic. He had a slight accent.”

Husband: “He sounds like he made quite an impression on you. Considering you could hardly hear him.” 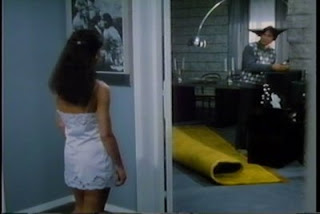 With only four speaking parts, it would seem like there would be a very limited number of combinations for everyone’s agendas, but the writing keeps us perpetually on our feet, meting out interesting, if outrageously unlikely, twists. The plot pulls from the whole library of mystery playbooks, coyly testing out the jealous husband’s revenge, plots to drive insane, maniac on the loose, perpetrator/victim table-turning, “it was all a dream” and much more, before discarding each one with playfully indifference. The movie even seems to know its reliance on Freudian psychology and avant-garde theater ideas were dated; ripe for flippant plot points in a trashy play. 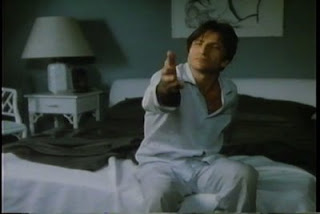 [Image: The strictly black and white set design, especially in the bedroom, struck me as curiously underplayed, but it might just be because my print was blurry.]

Unfortunately, due to its minimal scope, single set and utilitarian camera placement, there’s less excitement and flair here than there could be, so it doesn’t rank amongst the best gialli and may not win over the wider horror audience. At the same time, a smattering of nudity and adult content make this unlikely to play well for the reserved literary set and the screenplay may be too contrived even for the parlor room potboilers favored by mystery junkies. I’m not sure it has much of an audience, but I’m guessing anyone who bothers to track down a copy of this never officially released giallo will be amenable to its charms. 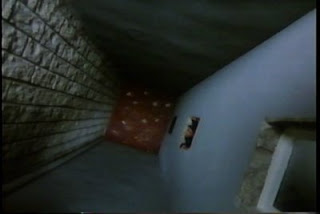 [Image: Franca screams out the window of her apartment into an aggressively claustrophobic courtyard (trash chute?) in one of the film’s only trick shots. Look closely (or even casually) at the brick pattern on the left and you can tell we are actually looking down a hallway.]

Sounds like a fun time! And your giallo screenshots are almost always the most interesting of the ones you take. Someday it'd be fun to see if you could do a whole review just out of screenshots and snippets of dialogue. :3

Thanks! This one was pretty hard to get interesting screenshots because of the single-set issue and the poor quality print I had. Usually, though, gialli do all the work for me in terms of looking really, really stylish.

I think the closest I've come to a screenshot-only review was the Rutger Hauer B-movie Iceberg Arena. It hardly even needed my sarcastic commentary.

I'm rather behind the times, but I had to chime in and applaud you for this:

Lest there was anyone reading my giallo reviews who thought the proper reaction was sober reflection or indignant revulsion.