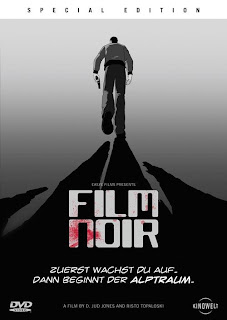 A number of the films I’ve been watching lately have come from Europe’s art film tradition, but with distinctly film noir flavors. They range from the poetic realism proto-noirs of Jean Renoir’s “The Crime of Monsieur Lange” (1936) and Marcel Carne’s “Port of Shadows” (1938) to the self-conscious return-volley in the wake of American noir’s heyday, like Federico Fellini’s “The Swindlers” (1955) and Jean-Pierre Melville’s “Second Breath” (1966). But while soaking up the immaculate cinematography, dissecting the high-minded themes and admiring the classy gangsters strutting about in trenchcoats and fedoras like they were on a fashion runway, I almost forgot how much I treasure vulgar little B-movies that have no scruples about getting their hands dirty to entertain.

Then along comes “Film Noir” (2007), a [mostly] black-and-white CG film set in a Chandleresque Hollywood and animated in Serbia. The title makes it clear that ambitions aren’t running particularly high in the originality department, but like a good Tarantino, Coen brothers or John Dahl movie, directors D. Jud Jones and Risto Topaloski demonstrate a great deal of skill in knowing what to steal and how to remix the loot. Take the opening: our protagonist wakes up under the big “Hollywood” sign with amnesia and dead body nearby. Did he kill the guy? Have we seen too many similar setups to care?

But then the body is searched and it turns out to be a cop, his crackling police radio telling us what we already can guess, “Shots reported near the Hollywood sign,” while sirens in the distance let us know that time is already ticking down. Our antihero hops into the corpse’s vehicle and uses the officer’s wallet to find the one house where he can lay low and be sure someone won’t be home. Except that when he walks in the door, the dead cop’s coworkers jump out and yell “Surprise! Happy Birthday!” We’re off to a good start.

Sadly, “Film Noir” never really lives up to the potential of that opening fifteen minutes where it looked like the screenwriters could take any film noir cliché they want and spin it down some crazy new alley. But I like the fact that the film never stops trying; serving us a heaping plate of mistaken identities, hunted phantoms, femme fatales, profession assassins, cynical secretaries, unethical surgeons, evil philanthropists and, of course, snuff-film shooting blackmailers. Everything’s undercooked and overindulged, but it’s a stomach ache I almost welcome.

Jones/Topaloski never try to tell us we’re watching anything more than B-movie fluff on steroids, but they also don’t give into parody/homage sloth. The story is constantly shifting, with linking clues that make the fast-paced scene changes and frequent twists into an intelligible story. Our amnesiac on-the-run hero, who may or may not be the worst criminal in the film, is surprisingly personable and sympathetic despite being reckless, manipulative and borderline sleazy. The action and suspense, while too heavily dependent on uninspired precedents, are at least consistent enough to keep the adrenaline pumping. I’m not sure what percentage of this is a compliment, but I felt like I was watching a mindless movie made by some rather intelligent people.

I actually found the computer animation quite tolerable (not up to the level of "Renaissance," however), especially when one considers that this was a relatively low-budget production (note that all the voice-acting is accomplished by about a dozen people each doing several characters) with no significant theatrical or DVD release. The 3D models are reasonably realistic, though pared down and with somewhat stilted movements. The choice to use black-and-white provides the right noir atmosphere.

The monochrome CG meshes so well with the occasional use of live-action black-and-white backgrounds that I didn’t even realize they were cheating until well into the film. Far from being disappointed that level of animation detail wasn’t up to the task, I actually appreciated that it propped up the realism (you can spot all sorts of famous landmarks) and made the images more dynamic.

Red and yellow, especially lighting like on vehicle taillights or the LED digits of a timebomb, are allowed to be colored, creating highlights that give the film a nice dash of luridness. Comparisons to “Sin City” (2005) are inevitable, but somewhat unfair; “Film Noir” isn’t going for the graphic novel look so much as a videogame aesthetic. Anyone who’s enjoyed “Max Payne” or “Grand Theft Auto” will feel right at home. Conversely, anyone who still thinks violent videogames represent the death of culture should probably skip to a different review.

My biggest gripe about “Film Noir” (aside from some truly awful flashbacks to earlier lines) is that sometimes it strays too far from its roots and ends up on the wrong side of town; the turf of the less respectable action genre. I mean, do we really need three helicopter chases? Three? These digressions take us from the anxious fallibility of Sam Spade to the suave invincibility of James Bond, and our suspension of disbelief, not to mention our concern for a character in peril, is lost on the way.

And while I’m aware that film noirs quite literally invented the femme fatale archetype, and thus forfeit any unqualified claims to gender progressiveness (although I would argue that these roles at least gave female characters greater agency, better lines and sometimes even the last laugh), I blame action films for streamlining the use of female characters as interchangeable sex objects. “Film Noir” borrows that concept a little too eagerly, stamping out essentially the same vamp three times with the only real variation being hair color.

While being well-aware that this sounds oddly hypocritical coming just after discussing the film’s misogyny, I still want to mention that the sex scenes are surprisingly above-average. I usually film animated sex pretty unappealing and discomforting (I had to force myself to finish “Fritz the Cat”), but “Film Noir” manages to sustain pretty intense eroticism without as much creepiness as I would have expected. Though the quantity is arguably gratuitous, it fits well with the shameless trashiness being flaunted by the film at large.

“Film Noir” is, of course, no finely wrought work of art. It’s a grab bag of nods, winks and kicks in the shin from a genre I love and am endlessly entertained by. It’s a guilty pleasure that actually makes me blush, but it’s also an energetic carnival of over-the-top crime fiction that I want to celebrate openly (hence the review). So if you’re of the right persuasion, up for a good time and not looking for commitment, spend a night with “Film Noir” (2007). Just don’t take it home to meet your parents.