Review of Legend of the Sky Kingdom 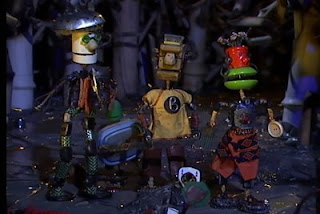 Africa’s first animated feature, the Zimbabwean stop-motion adventure “The Legend of the Sky Kingdom” (2003), may not have stirred up much mainstream buzz, but it’s left me itching for discussion and debate. It deserves to be acknowledged as an astounding technical achievement and a testament to artistic resourcefulness, but also got me thinking about the role of religion in cinema and the way values are transmitted to children through entertainment. 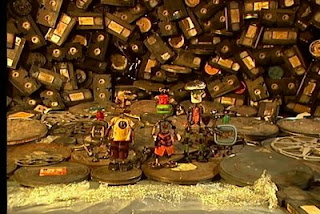 [Image: Coastal reel canisters near a cliff of VHS tapes.]

“The Legend of the Sky Kingdom” was shot on a home-built camera and features a cast and setting constructed almost entirely from discarded junk (director Roger Hawkin’s called his methodology “junkmation”). Far from achieving a grimy, dirty feel with an industrial or post-apocalyptic vibe, Hawkin’s has converted trash into a resplendent world of homely robot characters, ingeniously intricate creatures and meticulous magical locations. Dogs with crocodile clip jaws, trees with melted straw branches, waves of undulating plastic bags and many other tiny inspirations bring our imaginations to life. 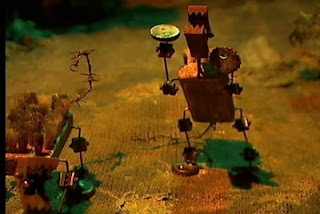 All this laborious design work would stagnate relatively rapidly if the movements weren’t convincing, but here the crew remains as polished as any Aardman animation. Motions are smooth, expressive and clear. Most characters move and talk in distinct ways, with each mechanical device choreographed in keeping with its unique components .(Katie, owing to her mechincal engineering training, identified dozens of cleverly appropriated devices that I couldn’t even name!) 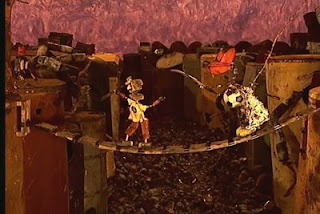 The film was shot in English, so I was even able to admire the way the mouth movements match the syllables. The voice-acting is sometimes a little too precious (I was nostalgically reminded of Gumby), but it’s chock full of personality. Italiano, the inevitable Italian stereotype, should have been a source of groans and cringes, but emerged as my favorite “performance.” You can really sense the cast having a lot of fun and giggling between takes while giving a benevolent monkey troupe a ridiculous French accent or voicing a sleazy lizard with a wheedling lisp. 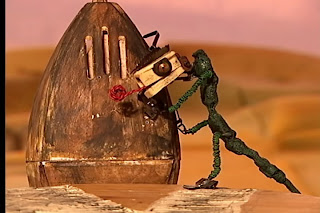 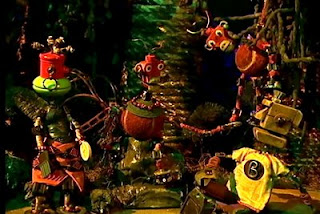 Outside of Italiano and his partner Badza, the main characters are Blockhead, Lucky and Squidge. They begin the film as oppressed slaves in the dingy underground city of the Evil Emperor. The band of would-be heroes gets thrown in jail trying to escape, but there they discover Telly, a book-sized robot which gives them key guidance. After making a leap of faith onto an invisible bridge (a scene too reminiscent of “Indiana Jones and the Last Crusade”) they emerge onto the surface world. 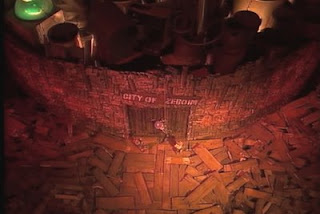 Once in the open air, the story becomes a great deal more loose and episodic. The overarching goal is to reach the Sky Kingdom, a legendary paradise that can be reached only by trusting in Ariel, the incorporeal son of the Sky Kingdom’s ruler. However, if their meandering path seen on a top-down map is any indication, their journey is less about crossing geography than overcoming a sequence of obstacles and challenges. It doesn’t take long before the story gives way to a rather pushy peachiness and falls into a dull formula: an obstruction is encountered, the team consults Telly or prays to Ariel who then provide a deus ex machina solution and everyone shouts the films’s endlessly repeated tagline “Believing is seeing!” 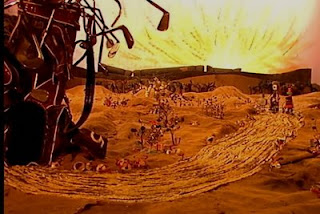 By now you’re probably noticing what most people in the audience are noticing: the rising pitch of religious sermonizing. It’s quickly impossible to ignore. The allegory, almost subtle at first, gets shoved down our throat: underground city = material world, sky kingdom = heaven, Ariel = Jesus, Telly = Bible, Evil Emperor = Devil, etc, etc. By the end of the film our heroes must even pass through the valley of death to reach the sky kingdom. 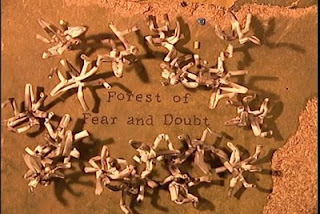 Now I’m usually a fan of cinema dealing with moral quandaries, messiah figures and religious themes, but there’s a line between parable and propaganda. I have three major problems with how “The Legend of the Sky Kingdom” conducts its missionary work.

Firstly, there’s the issue of being honest and forthright. The Russian stop-motion Jesus bio “The Miracle Maker” (2000) and the popular “VeggieTale” Christianity animations are two examples of excellent productions that are quite explicit about their religious agendas and benefit from that openness. “The Legend of the Sky Kingdom” doesn’t mention religion, Christianity, Jesus or anything like that in the marketing or DVD packaging, not even in the downplayed form of “spiritual quest” or “metaphorical journey” or whatever. The film even exerts a conspicuous effort not to tip its hand until we’ve become emotionally attached to the heroes.

The hint of subterfuge angers me more since the film is geared towards children. It’s arguably no worse than indoctrinating our youth with a lust for unconstrained consumption (commercials), the idea that all women are helpless princesses in need of rescue or ugly evil witches to be slain (fairy tales) or that explosions, blunt force trauma and murderous grudges are cool (cartoons). Still, non-Christian parents will have every right to be angry at the film. 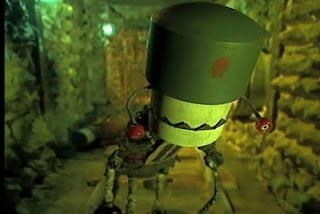 But surely most family films have some underlying moral code beneath the surface, right? Yes, and I think that’s fine and dandy. However, this is not the generic commonly-accepted morality (CAM) of society at large. Except for the blandness it can sometimes take on in inept hands, I rarely complain about the “cruelty = bad, community = good, diversity = tolerable, work hard, believe in yourself and never give up” message that constitutes 95% of family-friendly entertainment. My issue with “Sky Kingdom,” and my second complaint, is that the message is not particularly universal.

The literal refrain of the film, “Believing is seeing,” is not something I personally agree with. However, I don’t see any great harm in advocating faith up to a point. It’s the notion of unthinking, uncompromising, uncritical faith in a mystical force that bothers me. I finally put my foot down when the five travelers arrived at the Jungle of Confusion, or the “Jungle of Intelligence” as its gatekeeper, Prof, calls it. It’s a labyrinth that can’t be navigated using any system of logic or reasoning, but calling upon Ariel gets them led directly to the exit. 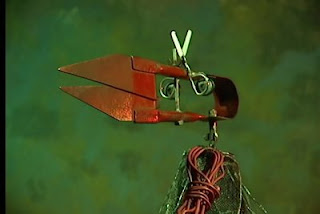 [Image: “Prof,” an evil professor bird who tries to trick our heroes by advising them to use intellect and believe in themselves.]

I don’t trust anything that tells me not to think for myself and I became increasingly disturbed by the film’s advocacy of outsourcing decisions to Telly and Ariel. I’m not saying it’s necessarily wrong to consult holy scriptures or use prayer when confronted with tough decisions, but you can’t blindly yield responsibility for your actions and expect it turn out as idyllically as it does in “Sky Kingdom.”

As for the CAM idea of religious co-existence, forget about it. Sky Kingdom makes it abundantly clear: there is only ONE WAY into paradise and it is through ONE PERSON and that person is the son of the ONE HEAVENLY FATHER. Anyone who says otherwise is a monster or a minion of the Evil Emperor. 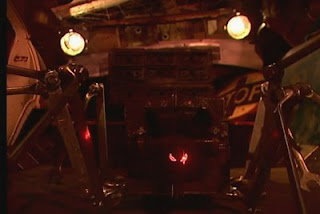 But despite the prickly issue of religion, I should mention that the film is still otherwise reasonably acceptable for children. The two complaints I’ve aired above can be easily overcome by going into the film with your eyes open (preferably with a sympathetic religious background) and, if watched with children, discussing the film afterwards (something I would almost always recommend).

My third complaint, however, is more fundamentally damaging. It is simply that the increasingly aggressive proselytizing gets in the way of the story. Eventually the secondary meanings become more prominent than the literal events and so the literal events begin to make less sense. The eventual loss of a real story in exchange for metaphoric lessons saps the film’s ability to sustain disbelief, tension and emotional depth. 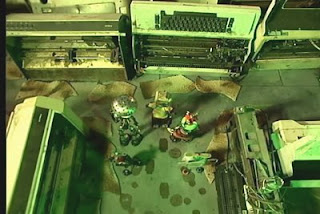 I would still say this film is absolutely worth it for its technical prowess and kid-friendly characters (both visually and vocally), but I can’t help thinking it’s seriously wounded by its agenda. What could have been a 9/10 for me if it had retained the story-driven creativity of the opening third, just doesn’t live up to its full potential. 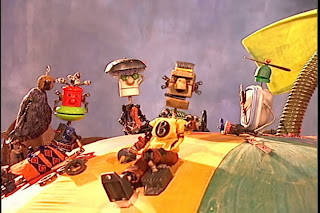 Posted by FilmWalrus at 5:31 PM

That's really a shame. I'm all for getting more countries into the animation game, especially in forms that are quickly losing out to the quicker, cheaper CG animation. It just sucks that someone seemingly uninterested in telling an honest story got the chance to make a film like this instead of someone with better ideas. Still, I always find myself in awe of the amount of effort it must take to make a stop-motion film. I simply do not know how these creators have the patience.

Yeah. It's kind of strange to be so wowed by the dedication and craft in a film, but then totally disagree with the message and ultimately the delivery. I feel like usually that happens to me with movies that are from the opposite side of the spectrum like Hard Candy.

Excellent piece! The concept and execution sound so novel that I'd still like to check it out. I appreciate being forewarned about the heavy-handed religious proselytizing.

I like that you wove your atheist perspective into the review. A perspective I see all too infrequently in all breeds of writing!

Your right about agnostic/athiest viewpoints not getting much play, especially in lit/music/movie reviews where magazines and large websites don't want to risk offense. The VeggieTales movies, which are hugely successful and actually pretty good, got the silent treatment from a large number of major review outlets and film critics, in part because they didn't want to risk showing a strong opinion about the movie either way.

Still, considering the number of reviewers who are out there campaigning against films that aren't Christian enough, I think it's fair for me to complain about one that's a little too much.

a brilliant review - just as the whole page. i wonder why i've come across it only now...? you got yourself a dedicated reader.

Thanks Łukasz Kruk! I'm always glad when my niche audience finds me! I hope you enjoy the site.

I noticed you're from Poland, a country whose films are absolutely amazing. I've recently been watching the excellent PWA "Anthology of Polish Animation" with one of my Polish friends and I recommend it if your into somewhat experimental films. I also encourage you to check out Kinoblog, my favorite blogger on East European cinema, if you haven't already.

Anyway, glad to have you reading!