A part of my youth will always be tied to Godzilla. I inherited my father’s love for the king of monsters and shared his excitement about obtaining Godzilla paraphernalia. I remember Christmases and Father’s Days when we gave him bulky Godzilla VHS box sets, a Godzilla T-shirt (a semi-abstract image of his shadow against a skyscraper which he still regularly wears) and action figures that are proudly displayed in his office.

But most of all I remember the films, in bits and pieces that make about as much sense as the wholes. I remember how much fun is was to watch giant monsters crush tanks, trample Tokyo and beat and the crap out of each other.

Now much older and living on my own, I revisit Godzilla less frequently, but was recently reminded of the reptilian ringleader when looking at an action figure display at the St. Louis Delmar Tivoli Theater. Thinking myself somewhat of a Godzilla completist, I was shocked to discover he’d had a full 29 features leading all the way up to 2004 (ending with “Godzilla: Final Wars,” which I watched with my dad). Most of my experience had been with the Showa era (the classics from 1954 – 1975), which many consider to be the height of cheesiness.

Godzilla originated in 1954 as the brainchild of director Ishiro Honda. The story was a parable about the dangers of the atom age embodied in the form of a giant dinosaur-like monster that terrorized Tokyo. In later sequels Godzilla would reverse roles and become a sort of guardian for Japan, defending it from all sorts of strange monsters that ranged from Mothra (a giant moth) to MechaGodzilla (a robot version of himself). Godzilla’s design was tweaked over the years, but his powerful screeching roar and the atomic beam he fires from his mouth have remained staples.

Feeling a bit nostalgic, I decided it was time to fill in some of my gaps in the Kaiju (giant monster) genre and stage a showdown of the most ridiculous Japanese monster movies. Ishiro Honda was an obvious place to start since he’d been my favorite director from the genre and I knew he had several unusual non-Godzilla films (“Matango: Attack of the Mushroom People,” for instance, which I once screened at Splice). I also acquired “Godzilla vs. Biollante” (not by Honda), known as the “lost” Godzilla films due to its brief theatrical release and unavailability on R1/R2 DVD.

So here are the competitors:

Now much like my Rutger Hauer B-movie Double Feature the rules are somewhat different from the usual Iceberg Arena format. Instead of competing to be the best movie in the traditional sense, the winner will be decided by which film is the worst in a good way.

The points awarded for each item will appear in brackets. 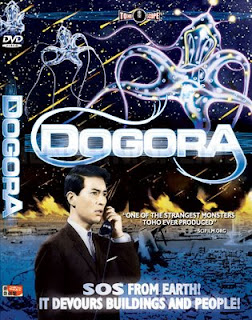 [8] Premise: A team of double-crossing jewel thieves is interrupted mid-heist by a giant squid from outer space who summons cyclones to suck up concentrated carbon. This is bad for the crooks, who are seeking a large shipment of diamonds, and bad for the hero cop, whose girlfriend lives near a massive coal mine. This was Honda last single-monster outing.

[3] Eventually the military concludes that Dogora was created when swarms of wasps (apparently flying around in the ionosphere) interacted with radioactive space cells. They therefore divine that wasp toxin should destroy Dogora, distributed by parachuting barrels of it into the air and pointing robotic hoses towards space (which fire about 30 feet up).

[3] When the toxin does take effect, it transforms Dogora, now a cloud of jellyfish-like bubbles, into rainbow-colored meteorites that rain down like skittles and crush the jewel thieves.

[2] For extensive use of a musical saw on the soundtrack to create an eerie alien warble.

[1] We are treated to a floating hobo in the opening scene. Other than this, the film never really exploits the fact that humans are carbon-based and Dogora largely ignores the cast, contrary to the poster art and DVD cover (seen above) which claim, “It devours buildings and people.”

[1] Dr. Munakata, who we’re told is one of the world’s leading crystallographers, asks “Coal and diamonds are both made of carbon, right?”

[1] Dogora only appears in its widely publicized squid form for a handful of seconds through an effect where mist is superimposed on a squid superimposed on an image of the sky. Dogora is actually seen in this form for longer in many of the trailers, which repeat the shot several times throughout.

[1] The requisite American character, “Mark Jackson,” karate chops three times as many people as the nearest Japanese character. As in the real world, a single mild blow on the back of the neck knocks the victim out instantly.

[1] The jewel thieves wear the world’s most conspicuous white gloves even when engaging in nighttime stealth operations.

[1] For several stock footage scenes of satellites spinning around or just sitting there. 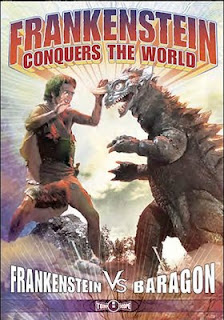 [12] Premise: Near the end of WWII, Nazis smuggle the immortal heart of Frankenstein from Frankfurt in the hopes that Japanese scientists can harness its cellular regeneration to create bullet-proof super-soldiers. A german destroyer transports the organ to a Japanese submarine, who then delivers it to Hiroshima just before the dropping of the atom bomb. 15 years later, a waif child is spotted killing small animals in the area. Dr. James Bowen, an American doctor living locally, manages to capture the creature, later discovered to be Frankenstein’s monster. The artificial man grows into an enormous giant, escapes from captivity and is suspected in the destruction of several mountain villages. The truth turns out to be that Baragon, a tunneling dinosaur with a glowing horn (and no backstory), is at large and mega-Frankenstein may be on the only one who can stop it.

[4] After successfully defeating Baragon during a raging forest fire, there’s still the question of what will happen to the 20-story Frankenstein. No problem. With less than 4 minutes left in the film a gigantic octopus comes out of nowhere, grapples with Frankenstein and pulls him into the ocean. I wish Hollywood films had that much unfathomable panache when dealing with loose ends.

[2] Frankenstein escapes from his chains when he grows so big that his shackles cut through his arm and the limb falls off. It’s later found crawling around with a life of its own.

[1] Dr. Bowen teaches his Japanese assistant (later to be his wife) “American humor.” She catches on quickly. When admiring his ability to cook beef (the sole element of American cuisine), he explains that the first step is to buy a good cut of meat. She quips back that really the first step is to “lasso a cow.” Both burst into laughter and fall in love.

[1] For Mrs. Bowen’s inexplicably giddy excitement when her husband suggests they visit the grave of a patient he couldn’t save.

[1] For the dialog exchange:
“If only we didn’t have to kill Frankenstein.”
“Well unless you can think of some other way to kill him, we’ll have to.”

[1] For the actress who responds to a nearby avalanche as Baragon busts through the side of a mountain with “Did you hear something?” and for the fact that nobody else does. We never see this character again. 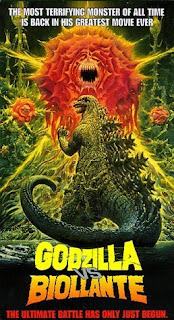 [9] Premise: Dr. Shiragami, a once ambitious scientist now quietly wiling away his time experimenting with plant telepathy, crosses secret government Godzilla DNA with rose petals and the remains of his dead child Erika, inadvertently (well, actually it seems like it would have to be pretty advertent) creating Biollante, a towering rose-monster with thorny vine tentacles (arguably one of the lamest monster premises ever). As something of a sibling to the gargantuan lizard king, it calls out to Godzilla, who is busy decimating Japan, and several titanic battles ensue.

[4] The Japanese Self-Defense force tries to kill Godzilla with a mirror-lined hovercraft that reflects back his atomic ray “1000 times stronger” and by firing bazookas at him containing syringes of bacteria that eats his vital nuclearness. Not only is the poor understanding of science hilarious, but the visualization of these silly ideas is appropriately over-the-top.

[2] Dr. Shiragami communicates with Biollante through his young female telepathic assistant. At one point he abandons her on an empty ocean platform to try (unsuccessfully) to reason with the approaching Godzilla.

[2] After Godzilla defeats Biollante for the final time, its spores ascend into outer space and Dr. Shiragami sees the image of his daughter’s now-smiling face superimposed in the glowing particles like some sort of trippy mirage.

[2] For perhaps the worst soundtrack in any Godzilla movie I’ve seen. Whether triumphant, comical, ominous or upbeat, the music never fits the action. One suspects that the composer was not given even a rough cut of the film to work with and that a deaf studio stooge ironed the musical tracks onto the celluloid at random.

[1] The various factions duking it out on the ground are a little difficult to follow, but one appears to be a silent assassin hired by an Arab company whose nefarious (?) plot involves ending world hunger with a Godzilla-spliced strain of super-wheat.

[1] There’s also a couple of American agents working for a company called Bio-Major trying to steal the anti-nuclear bacteria for some unclear reason. You can tell they are American because one is African-American and their dialog consists of English expletives.

[1] Once Biollante blooms, it is able to spew radioactive acid vomit.

[1] Godzilla emerges from the inside of a volcano, after a terrorist bomb disturbs his sleep.

[1] The bazooka battle with Godzilla takes place along the riverbeds that wind through a Japanese commercial district, a huge set that is actually pretty cool.

Honda’s “Dogora” was a major disappointment that really failed to do much cool with its crazy ideas and skimped on the special effects needed to be considered a kaiju classic. However, the director made up for it with “Frankenstein Conquers the World,” a film so consistently silly and yet strangely inspired that I was never bored. Meanwhile, “Godzilla vs. Biollante” won’t be regarded by any as the best in its series, but it is far from being the worst and had enough bizarre concepts to remain more memorable than most.

Winner: Frankenstein Conquers the World
Posted by FilmWalrus at 3:24 PM

Fantastic idea for an article. I like to think of Evangelion as the sophisticated offspring of kaiju movies.