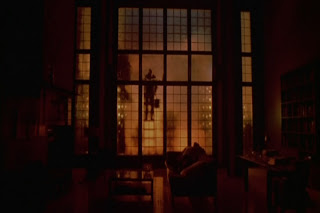 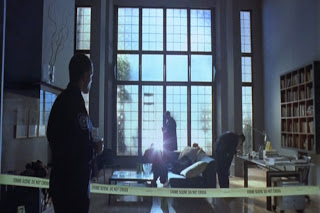 [Images: (Top) A window washer spies a corpse and (Bottom) a crime scene is cordoned off in the time-spanning fade that opens Robert Lepage’s heady SF mystery “Possible Worlds.”]

Inspector Berkley has had five murder cases recently, but the latest is a little different. There is no motive, no murder weapon and only a single item stolen: the victim’s brain. 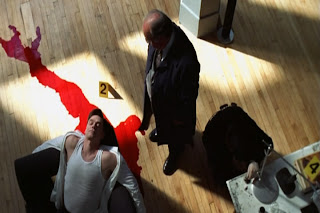 The rightful owner of the brain is George Barber (Tom McCamus), a man who is sometimes a brilliant investment consultant; though it depends on which world you catch him in. George Barber is something of an exception; he shares a single consciousness across every version of himself in the infinite set of all possible worlds. He has trouble keeping track of which parallel universe he’s in, but stays fixated on the one constant that anchors him: his love for Joyce (Tilda Swinton), who is sometimes an aggressive corporate day-trader and sometimes a shy and withdrawn scientist. It isn’t clear which version of George Barber has been killed, or at what point in his timeline, or for what reason. 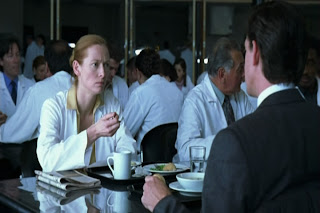 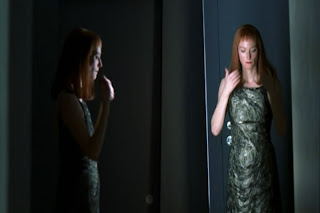 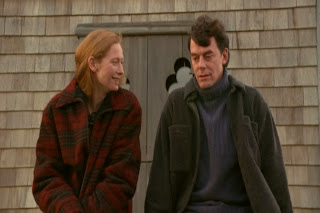 “Possible Worlds” (2000) is a gorgeous, enigmatic sci-fi film with an inventive take on the parallel universes theme. It’s a surefire hit for SF intellectuals who prefer thought-provoking writing to glitzy special effects. The hipster crowd should take note, as this is perfect material for impressing your peers. It belongs on this generation’s short list of requisite cult SF, though it remains unduly obscure in the US. In Canada, where the film was made by talented director Robert Lepage, it was nominated for a Best Picture Genie. 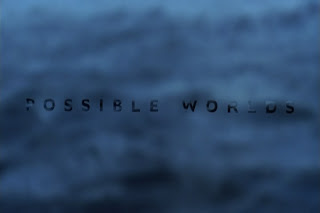 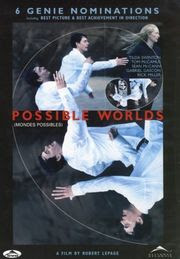 Much like the weather in my northern neighbor, “Possible Worlds” is awfully cold, especially for a love story. The film has a blue hue, an aquatic theme and a lot steel modernist architecture all contributing to an atmosphere of emotional distance and drifting humanity. The shallow focus cinematography wraps things in an uncertain haze, a fitting compliment to the shifting realities where relationships, encounters and emotions are always familiar, but never the same. 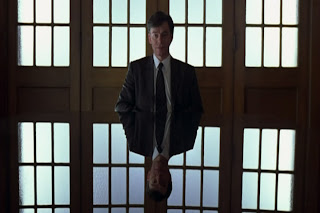 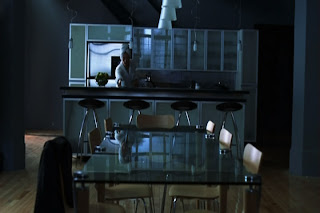 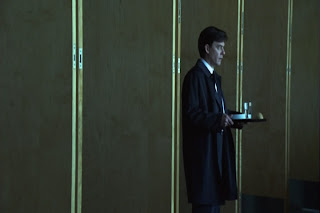 [Images: I bet the art director has a really clean house.]

Even the dialogue has a whimsical monotone, a little too heavy with coded portents, but cleverly woven into the film’s metaphysical themes. The script has bits of Becket thrown in and scraps of other abstract thinkers as well, and though the odd delivery can occasionally feel like a muddled mindgame, the top-notch cast smooths over the rough spots. 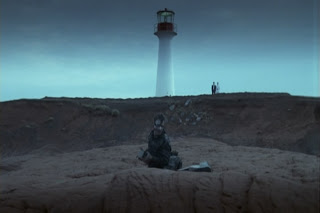 The emphasis on science, deduction and clinical detachment are doubtlessly influences from John Mighton, the mathematician who wrote the original play. He’s no bore though, and he’s clearly as interested in the energy of the imagination and the gravity of the heart as he is in philosophical set theory (from which the title comes). His penchant for deadpan comedy sneaks into dozens of memorable moments, including a absurdist linguistic episode where two men speak in a language of only three words (“slab,” “block,” and quite rarely, “hilarious”) and occasional exchanges between Inspector Berkley and his deputy, Williams. 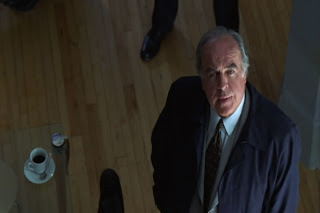 One of Lepage’s most impressive feats is the way he almost begs us to solve the mystery, leaking clues in every conversation, but also in the set design, associative editing and sound mixing. It culminates in a fine twist, one which is fair enough to be worked out by the viewer (though for the record, I was pretty late on unraveling it), without hinging the film’s satisfaction on the revelation. It’s the type of thing that needs to be seen twice, if only to catch all the hints, connections and misdirections. 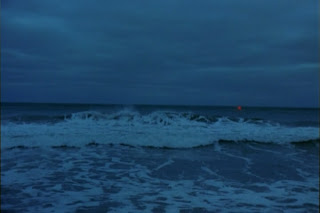 [Images: What does it all have to do with a coffee machine, a sensory deprivation tank, parallel universes, eternal love and the weather? That’s a secret I won’t tell.]

[SPOILERS, this paragraph only] “Possible Worlds” uses a premise that has appeared elsewhere, specifically in “Open Your Eyes” (1997) and its American remake “Vanilla Sky” (2002). Both of those films, in turn, borrow many ideas exactly out of Philip K. Dick’s 1969 novel “Ubik,” without attributing any credit. While “Ubik” is a fantastic novel and a deserving SF classic, neither of its cinematic progeny quite lives up to the potential. “Possible Worlds” was originally written in 1990 (predating the other two films) and with more diverse influences. It develops its ideas in different directions and provides what I consider to be the definitive take on the world-inside-the-mind concept. I would guess that Cameron Crowe was familiar with “Possible Worlds” when he made “Vanilla Sky,” considering the conspicuous cameo role (as an LE case worker) played by Tilda Swinton.

There is a lot to say about the film-craft in “Possible Worlds” if I were going to really cover the ethereal music, the graceful camera movements and the mismatched sequencing. Instead, I’d like to spend a little extra time just admiring the beauty of my favorite scene transition. It takes us from the new age art of Joyce’s apartment into one of George’s dream sequences: 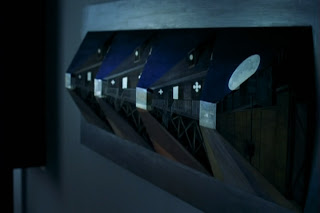 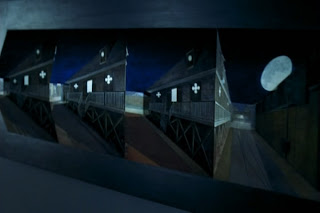 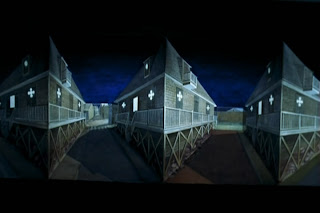 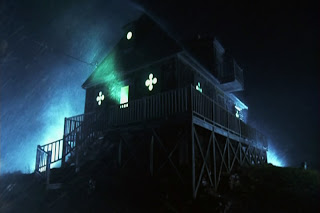 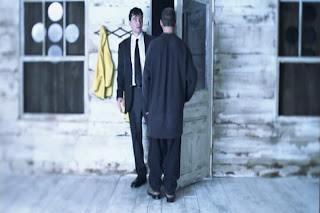 [Images (from top to bottom): (1) A protruding sculpture-painting on Joyce’s wall seen from a side-angle. (2) As the camera pans, it begins to reveal itself as a perspective painting with multiple vanishing points. (3) Seen straight on, the illusion of receding vanishing points becomes complete. (4) Heralded by a thunder clap, the house from the painting springs into being as the dream begins. (5) George enters the cabin, where things will only get stranger.]

If you’re familiar with any of the other films in my modern-hipster SF list above, then you already have a reasonable idea of whether you will like this film or not. I give it a hearty thumbs up and am eager to start lending it around to friends (sadly, it is no available on Netflix, but it can be found easily on Amazon). The only reason why I haven’t already passed it on was that I wanted to take screenshots and I knew I wouldn’t be able to put it in my DVD drive without watching the entire thing again. 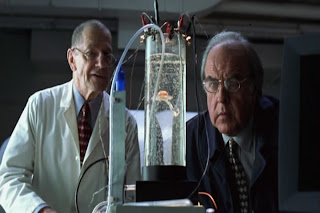 While it pains me to see 2002's Solaris at the bottom of that list, I'm impressed it got onto a list of any kind, considering its almost non-existent buzz.

Anyways, believe it or not, I'd heard of this movie, like, a day or two earlier. I wondered whether or not it would be a B movie letdown, but the presence of the lovely Tilda kept me interested. Now I'll have to borrow it to see what the fuss is about. }:3

There's no shame being at the bottom of an alphabetic list.

D'ohhhh. I didn't catch that!

I just wanted to say that I am happy to notice someone loves that film the same way I do! :) Solaris (2002) will still be the number one for me with Possible Worlds and Vanilla Sky just right after that! In fact Vanilla should probably make way onto the list as well as Bladerunner, perhaps?