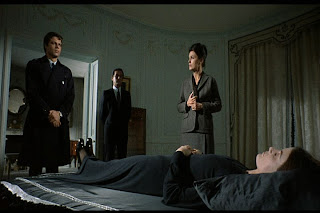 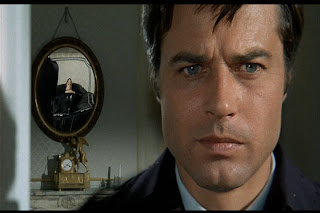 [Images: Jean Sorel stares blankly while Lucio Fulci’s camerawork does the expressivity.]
It’s almost embarrassing to admit (in giallo circles) that I’m not a huge fan of Lucio Fulci’s gore. It’s not that his maggoty make-up and crimson syrup are poorly sculpted, oozed or splattered, per se, but something about the way he films his money-shots. He goes after his effects so directly and shoves our face into his work so unceremoniously. There is very little coyness; no playful dancing in and out of shadow as the full horror gradually unfolds. A cut-in to a close-up, or more likely a zoom, too often trades tension for revulsion.
As a reviewer who is addicted to horror, but remains fairly uninterested in shock value, I find Fulci’s zombie movies to be consistently less rewarding than his giallo work. His imagination is wasted trying gross me out. Where his creative genius really shines, in my mind, is not in the gore itself, but in the absurd situations and macabre contrivances that bring about such grotesque mayhem. There is something cleverly humorous, horrifying and audaciousness in his best scenes. “Zombi 2,” for instance, is an ugly and bumbling film that fans claim is redeemed by its impressive zombie make-up and vigorous violence. The moments I find compelling are the near-whimsical boldness of the underwater swimmer-zombie-shark battle and the hilariously mellow “assault” by ranks of skeletal conquistadors.
I say all this first to make it understandable why Fulci’s “Perversion Story” (1969) is right up my alley. It predates most of his famous horror work and focuses primarily on the mystery plot and character development. There are only a couple of murders and they are both very near the end. Fulci still suffers from pacing stinginess, refusing to give us any real satisfaction until he is ready to unleash the storm of final twists, but his steady psychological approach makes us care for his characters far more than in his later films.
George Dumurrier (Jean Sorel of “Short Night of the Glass Dolls “ and “Lizard in a Woman’s Skin”) is married to Susan (Marissa Mell of “Danger: Diabolik” and “Seven Blood-Stained Orchids”), though he spends most of his time running a medical clinic. Susan feels neglected and considers her marriage a failure. George agrees, secretly wishing to openly pursue his long-time mistress, Jane, but unwilling to abandon his wife while her health is poor. It seems providence has done him a service when she dies, but his new-found bachelorhood is soon turned upside-down when he encounters a stripper who looks strikingly similar to his late wife. 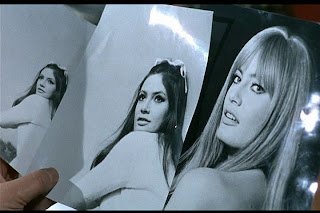 [Image: (from left to right) Susan Dumurrier, a slightly larger Susan Dumurrier and look-alike stripper Monica Weston.]
The film is clearly an attempt to do “Vertigo” as a giallo (set, as usual, amid the decadent fashion industry) , with a little extra sex thrown in for good measure. The talented team of Sorel & Mell actually pulls it off, their contrasting personalities making the prolonged state of confusion and frequent errands down blind alleys more bearable. Sorel’s character gets to go further into Freudian territory than Jimmy Stewart’s, with his red light district rendezvous leaving him unsure whether he is desecrating or reliving his wife’s memory. 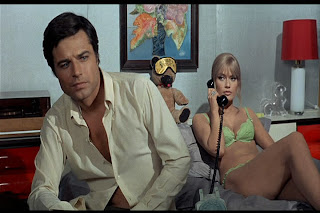 Meanwhile, Marissa Mell weaves together a femme fatale whose off-the-cuff sexuality and seeming simplicity keep us unsure even as the evidence points undeniably towards foul play. 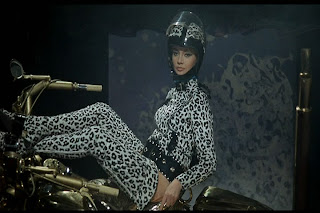 [Image: I’m hoping this performance piece is satire, because it’s scary to think this might be an image from someone’s actual sexual fantasy. My favorite outrageous outfit from the film? A pair of black gloves being used as pasties. Sadly, I couldn’t get a PG-13 screenshot.]
Lacking a herd of character ripe for the slaughter or any appetizer subplots to tie us over, the bulk of “Perversion Story” is slow even by giallo standards. Hanging out in front of the screen while Fulci sets up all the clues that will fall into place in the final act is a bit like trying to pretend you aren’t aware of the preparations going on for your own surprise party.
When we finally get to the scene where the villain reveals how the show was run, the film picks up. The evil plan itself might be plain ridiculous (or perhaps just meticulous), but the delivery is so clearly relished by the writer-director that the audience can’t help but share his enthusiasm. The ending twist is obvious enough (if you’ve seen “Vertigo” and/or any giallo ever), but there is genuine tension in the death-row finale and delicious irony in the final few minutes. It’s a touch of good drama where I was expecting a by-the-books final chase/battle, and the change of pace left me grateful.
The style definitely anticipates future giallo excess, which I’ll simply point out in the following screenshots: 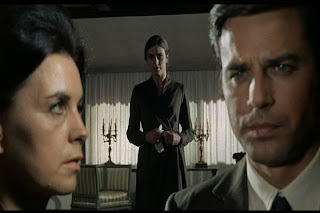 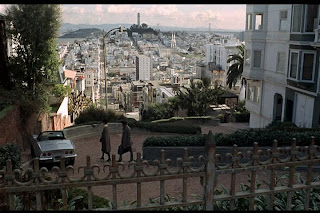 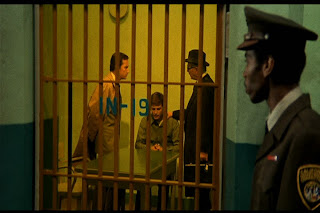 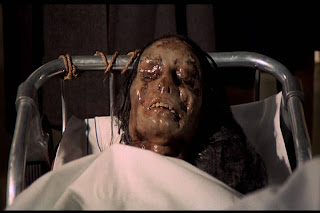 [Image: Oh, and before I forget: there is a brief moment of Fulci‘s classical rotting corpse antics. You can’t blame the man for a little indulgence.]
There may not be any trench-coated killers with black gloves and festering childhood traumas, but “Perversion Story” does have one thing most giallo’s don’t: five-way split-screen. And who doesn’t love that? 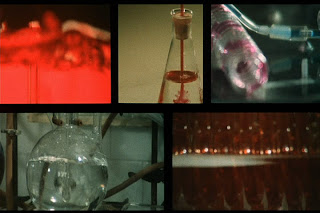 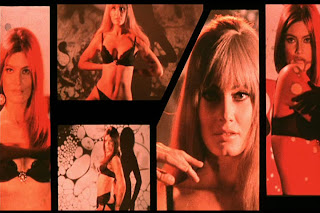 I am TOTALLY impressed by the five way split screen, especially the second one.

I suppose you could look at that and see that this, truly, is a man who could realize underwater man v. zombie v. shark battles.

i just finished seeing "perversions story." one angle that hasn't been explored in this review is the idea that this is a european attempt at an imitation of an american film. an american-type film done as an italian-style giallo. a bunch of european film makers went to san franciso to make an american style film--and ended up beating, or at least equalling, the yanks at their own game. "perversion story" may not be an all time masterpiece. however, it compares favorably with what was being put out by spielberg, lucas, and coppola at about the same time........