Review of Strip Nude for Your Killer 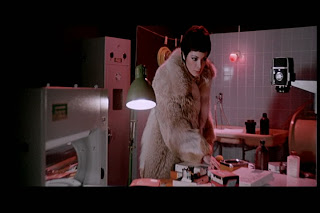 [Image: Red light district or photography dark room? You’ll get a little bit of both before this movie is done.]

It isn’t very hard to figure out who producers were targeting with the lurid title “Strip Nude for Your Killer” (1975), a giallo by Andrea Bianchi. While many gialli flirt rather harmlessly with sexual material, “Strip Nude” is an outright attempt to combine the giallo with “adult entertainment” and it easily outstrips (such a bad pun) most gialli in its shameless reliance on nudity. However it’s not an entirely wasted exercise and flickers of potential in the story and technical craft occasionally appear.

The film stars Nino Castelnuovo as fashion photographer Carlo Bianchi (note the director sneaking his name in already) and Edwige Fenech (with short hair!) as model/photographer Magda Cortis. After a tasteless intro wherein two doctors drown a corpse in a bathtub to disguise a botched abortion, we are introduced to Carlo. He stalks and seduces Femi Benussi (last seen in “The Killer Must Kill Again” from the same year) within minutes using hilariously cheesy pickup lines and promises. 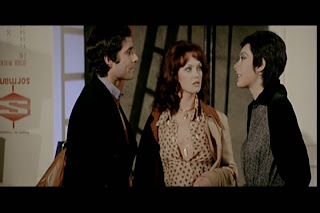 [Image: (from left to right) Catelnuovo, Benussi and Fenech.]
We soon arrive at the modeling studio where Carlo works. It exists somewhere in the limbo between the fashion and pornography industries. It doesn’t take long for the killings to begin, and it becomes clear that everyone at the agency is a target. The gloved killer has a photo of all the employees and begins to exterminate them one by one. 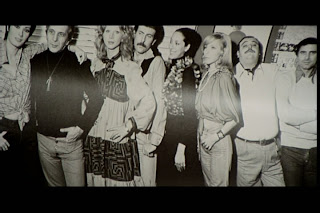 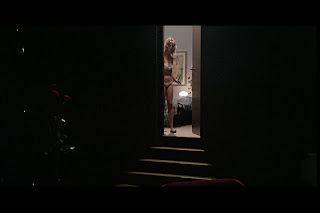 [Image: There are at least two things I would do before entering a dark room where I just heard scuffling and death-cries: 1) Call the police. 2) Put something on over my lingerie. However, to be honest, I wouldn’t enter the room at all and I wouldn’t have been wearing lingerie.]
The deaths tend to be pretty standard affairs, with the only variation being that the killer must have running water nearby to work up a psychotic murder fervor. Despite this, two scenes take place by prominent outdoor fountains without anything happening. One suspects that Bianchi has a lot of fun misdirecting audiences in unusual ways. My favorite example occurs when the audience has just seen the gay photographer killed by someone in a leather outfit and motorcycle helmet. Bianchi then cuts to the studio on the next day, where two of the suspects are being photographed for a sexy motorcycle spread. 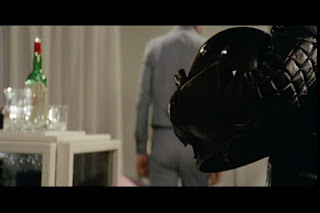 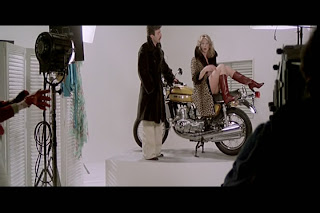 The most awkward and darkly humorous kill is inflicted upon the bumbling, obese, cuckolded husband of the studio owner. After embarrassingly admitting his impotence to a kindly model, he gets attacked while clutching a deflated sex doll in one hand and a knife in the other. I don’t know whether to feel worse for the victim or the first person who stumbles upon the scene of the crime. 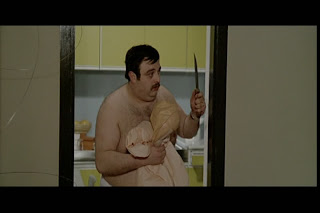 “Strip Nude for Your Killer” doesn’t get a recommendation from me, but it does offer some insights into the extremes of sexuality that the genre was willing to go. It offers a straight forward mystery without many clues or clever twists, but with rare moments of shock and tension. Not a particularly good thriller, but if you like your exploitation cinema with an extra couple of X’s, this is a film for you.

Walrus Rating: 3.0
Oh, before I forget I should do an art comparison. The picture is distinctly surrealist, but whether it is imitation Dali or imitation Magritte I’m not quite sure. I went with Rene Magritte because the floating rocks theme appears in his work so often. 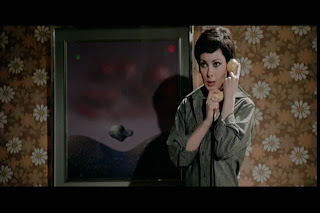 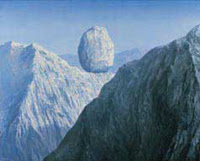 Posted by FilmWalrus at 1:37 AM

Oh come on, it should get some more points simply because it's so funny. It's a broader sort of humor, yeah. The fat guy trying to obviously seduce the model made me laugh out loud several times at how stupid they both were. And the blow up doll cracked me up again. Not to mention the way Fenech's boyfriend keeps throttling her menacingly for no reason.

A month ago today I read something that shocked me so bad that I went into a cold sweat.

One simple thing that I had been doing everyday was causing my erectile dysfunction...

And leaving me completely unable to perform in the bedroom.

Are you making this common mistake? Watch the short video below to find out now, and learn what you can do about it.

No humiliating pumps. No expensive pills. No dangerous injections. And no disgusting food combinations, thankfully...

Let me tell you, I wasted a LOT of time and money on ways to fight ED that not only didn't work...

...but also left me feeling like less of a man in the end.

To learn more about how you can get rid of erectile dysfunction using safe, all-natural, and affordable methods watch this video now!

P.S. Big Pharma isn't happy that this "miracle" solution to ED is killing their profits. They'd rather have you popping expensive pills for the rest of your life.

Use the link below to check out the video now, it could get taken down at any time if Big Pharma gets word of this, and you'll never get to learn how easy and affordable beating ED really is.