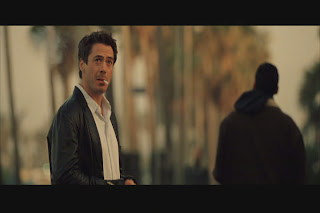 Shane Black, previous best known as the writer of the “Lethal Weapons” series, delivered a crowd-pleasing comedy-noir with his 2005 directorial debut, “Kiss Kiss Bang Bang.” The film proved that Black had more than a golden pen and showed off his visual acumen, originality and sizable knowledge of noir history on and off the screen. Unfortunately, Warner Brothers second-guessed the film’s viability and blundered the distribution by opening on only 8 screens and expanding to a peak of merely 226 theaters. With almost no marketing or support, the film grossed just 4 million in the US (it made three times that abroad) when it had mainstream blockbuster potential and ended up being labeled the most overlooked film of the year by several critics.

The title, incidentally, comes from film critic Pauline Kael’s 1968 quote: "Kiss kiss, bang bang. This is perhaps the briefest statement imaginable of the basic appeal of movies. This appeal is what attracts us, and ultimately what makes us despair when we begin to understand how seldom movies are more than this." 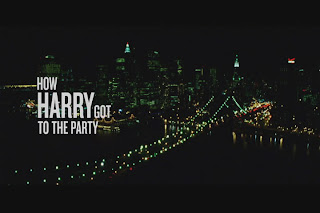 The film picks up with Harry Lockhart (Robert Downey Jr.), a criminal who ran into a casting session while fleeing the police. He does such a good job acting the part of a crook who just got his partner killed (exactly what has just happened to him in reality) that he lands the part and is flown to L.A. to receive detective lessons from “Gay Perry” (Val Kilmer) in preparation for his role. At a party, he is reunited with Harmony Faith Lane (Michelle Monaghan), his childhood crush, now an aspiring actress. 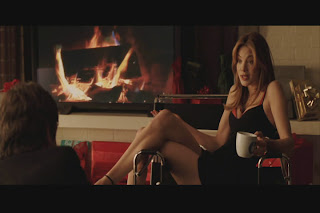 On Harry’s first night of detective practice, he witnesses a car dumped into a lake with a dead girl in the trunk. Perry and Harry can’t go to the police since they broke open the locked trunk with a bullet that ended up in the victim’s head. The body beats Harry back to his hotel room, and he quickly realizes that he’s being framed for the crime. To make matters worse, Harmony’s sister has been killed and she thinks Harry is a real private eye who might be able to help her find the truth. Like all good mysteries, the two cases turn out to be connected. 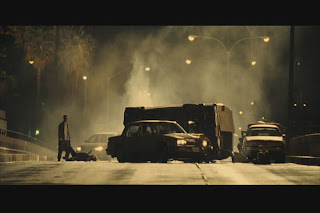 After a brief flashback intro, the film kicks immediately into high gear with one of my favorite credit sequences ever. It’s full of the cartoon graphic art style used in the intros of “Catch Me If You Can” (2002) and “Casino Royale” (2006), but with a pop-art noir twist. The black, white and red palette boils noir to its essence, best captured in a sequence of screenplay pages (from the actual film) splattered with blood and lipstick. Kiss kiss, bang bang indeed! 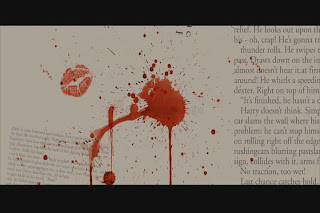 When the plot really gets started, we are joined by Harry Lockhart, clearly drunk at a party of L.A. bigwigs and hopefuls. Robert Downey Jr. not only stars, but immediately starts delivering a narration of his own adventure. I’d consider this a risky move, since narration is fairly frequently despised for being redundant and expository. Shane Black, however, gives it a post-modern self-awareness that is irresistible fun. Downey is a comedic revelation, and a slyly ironic casting inspiration: an actor turned criminal (he did jail time in 1999 for cocaine possession) playing a criminal turned actor.

Downey delivers Black’s often hilarious prose with quick, stammering wit and timing: trying to hit on an attractive girl at the party who asks him what he does for a living he replies, “I’m retired. I invented dice as a kid.” The girl looks mildly impressed and claims she does a bit of acting. The film immediately cuts to a brief clip of her in a horror movie, topless and screaming, before she gets her head knocked through the air by a monster. 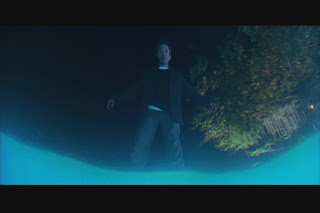 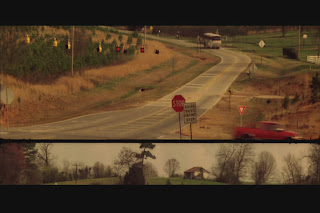 [Image (bottom): Harry interrupts the reel partway between two frames to give some background that he forgot to fill in.]
Downey constantly breaks the fourth wall to cobble together the story. He’s always apologizing for one thing or another like withholding information to create suspense, making fun of a scene with obvious foreshadowing or acknowledging that the ending cheats a little. His interplay with Val Kilmer is excellent. Kilmer’s capable, sarcastic, homosexual detective delivers all his lines with a mean deadpan that leaves Harry Lockhart behind and creates some of the funniest exchanges of dialogue. 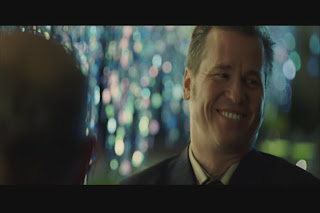 Michelle Monaghan gets to have plenty of fun as the exceedingly appealing girl-next-door character. She gets to be funny and sexy without having to be ditzy, victimized or villainized (a rarity in noir). Harmony’s romance with Harry is contagiously charming without getting sappy or dragging the plot. 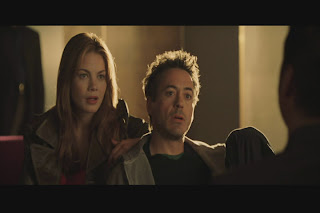 Harmony’s backstory is easily the best of the cast with a humorous childhood magic show episode (the opening flashback), a “discovery” as an actress when she gets on the news following a break-in by a drunken man in a robot suit and an acting stint in a ridiculous commercial for beer featuring a brilliantly awful CG bear. 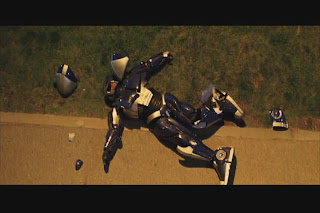 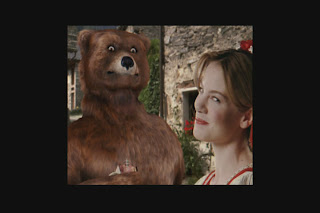 [Image (bottom): “I prefer Genaro’s, but I’m a bear, what do I know? I suck the heads off fishes.” Now that’s a tagline!]
I’ve probably made the film sound really discombobulated and entirely comedic. It actuality is very absurdist and full of sidetracking comedy vignettes, but Shane Black has a wonderful ability to make everything tie back into the film (think “Hot Fuzz” (2007)). Sometimes the tie-ins aren’t even that relevant, but its keeps the film feeling coherent and clever. The mystery at the center of the film is not treated as a throw-away setup for quick gags, and elements of the plot are actually quite engaging. “Kiss Kiss Bang Bang” does have some trouble selling the sadness, pain and darkness on the side of its criminal underbelly, but the black humor and likable trio easily sustain the light-hearted overbelly (yes, I am going to pretend that is a word). 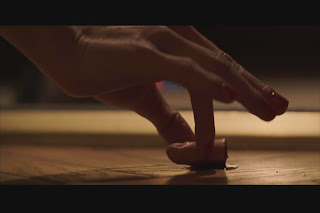 So while you won’t feel the desperate grittiness and steely cynicism of vintage cold-blooded noir, Black does prove he knows the ropes and tropes. The film’s chapter titles come from Raymond Chandler stories, but smartly follow the action as well. “The Lady in the Lake,” for instance, is used for the chapter where Harry and Perry witness the car and corpse being disposed in a lake. In a particularly post-modern gesture, the leads are both fans of a fictional writer named Johnny Gossamer whose dime-store novels have cheesy titles and lurid covers that perfectly emulate the real thing. Gay Perry insists that real life detective work is really quite boring, but all of Gossamer’s literary clichés (shared by the genre at large) end up playing out in their real life adventures. 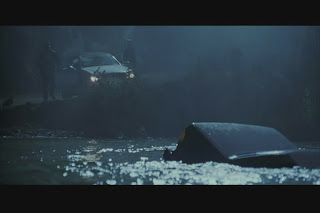 Despite all the digressions, the pacing is actually quite fast. It’s clear that Blane’s experience with “Lethal Weapon” (1987) and other screenplays prepared him for the blend of comedy and action that he so expertly weaves here. The visuals are snappy and kinetic with lots of commotion and little absurdist touches. The parodies of swanky L.A. clubs with overly-serious hipness in the form of weird mimes and reindeer themed strippers are treated with offhand surrealism. Black also gets to poke fun at and pay tribute to the contrived eroticism of cheap noir fiction in a scene where Harmony runs through traffic with a Christmas novelty costume and a loaded revolver. Strangely, it all makes sense in the context of the elaborate plot. 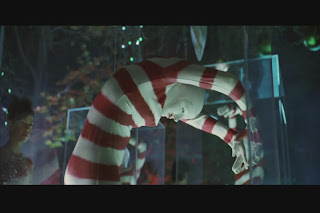 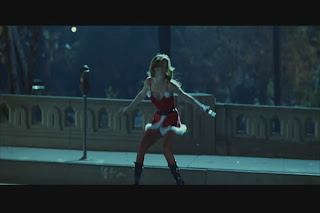 The cinematography and sets show a savvy color sense. More complicated than just black and white, Black leans on surprising saturated colors. Reds, blues and yellows get used for lens tints, interior decoration and composition accents in an eye-catching, modish way. The color themes don’t appear to have any particular meaning and generally style triumphs over depth in much of the presentation, but it certainly works as a visual experiment. The shadowy off-kilter atmosphere of the genre still shines (er… darkens?) through, with plenty of blackness, high-contrast lighting and high angle shots. 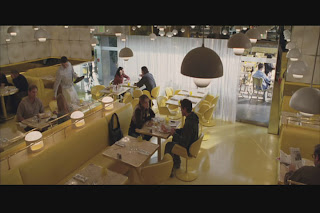 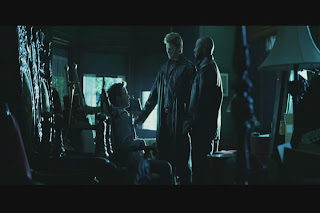 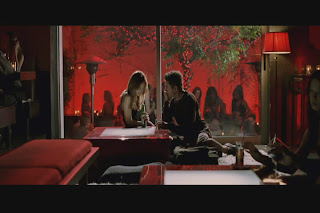 [Images: Yellow, blue and red getting unusual attention for a noir picture.]

Ultimately the film’s humor might fall on fallow ears for many audiences. There are a couple misses in the dialogue and a few jokes that reach too far. The humor is also dark enough to disturb some sensibilities. One scene involving Russian roulette had me laughing out loud and then feeling like I was a psycho. For myself, I can say that I totally got into the mood of the film, resonating with the humor, the action and the quirkily charismatic lead trio. The film joins “Brick” (2006) and “Red Rock West” (1994) as under-rated modern noirs that deserve more attention and acclaim.
Walrus Rating: 9 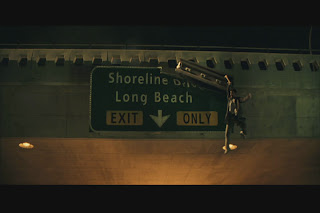 [Image: Harry hanging from a hand protruding from a coffin suspended on the bridge of a highway. Don’t ask how things got to this point…]
Posted by FilmWalrus at 6:33 PM

It's a sign of good screenwriting (and directing?) when you aren't pointing a blinking arrow at every single joke, either. The "Ficus" joke (my favorite?) goes by so quickly even the recipient of the line doesn't catch it.

The "native-american joe pesci" series of jokes is genius, too. So natural (because they were)