Review of The Innocents 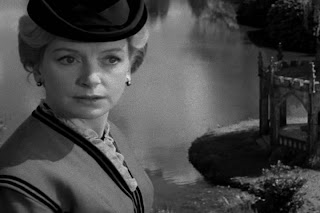 Director Jack Clayton made an about-face from his landmark ‘angry young man’ tale “A Room at the Top” (1959) (highly recommended) with the chilling gothic horror film “The Innocents” (1961). The movie is based on the novel “Turning of the Screw” by Henry James and screenwritten by Truman Capote. With Scottish starlet Deborah Kerr in the lead and a cameo by Michael Redgraves, “The Innocents” has too much talent behind it to fail. It doesn’t, but a great deal of the credit goes to cinematographer Freddie Francis and the amazing sound team. 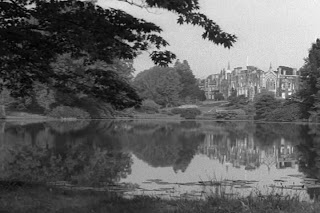 In the opening scene, Miss Giddens (Kerr) is asked to be the governess for two sweet and adorable children who have no parents to care for them. Their uncle is rich, but despises children and their most recent governess has died. Flora and Miles, the two young children, desperately need affection and attention as they have been languishing away at boarding school and their enormous blissful estate. Miss Giddens accepts despite her initial misgivings and quickly comes to love the position. That is… at first. It bothers her that Miles has been expelled with little explanation from his school. Also troublesome is that Flora somehow presciently anticipated his return. Giddens begins to lose her fix on reality as the darks secrets of the past and the supernatural ongoings of the present consume her imagination. 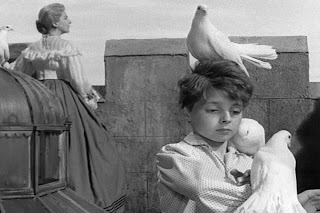 [Image: If this boy isn’t a lovably pretension little scamp then I’ll eat my pigeon hat.]

Now I know what everybody is thinking at this point, because I thought it too. I reacted with something along the lines of, “Not another stupid old haunted house movie” and “Wow, I bet it will be really surprising when the children turn out to be satanic. I wonder if they killed the previous governess. Duh!” To be honest, I’m not familiar with Henry James’s work but I figured that I would be jadedly familiar with any gothic horror story that heralded from before the 1900’s and I quickly set about polishing my scoffing monocle. How wrong I was.
In truth, the plot is not really worlds away from your typical haunted-house/satanic-child setup, but in execution, James, Capote and Clayton have fashioned some brilliant variations. The film combines high-pitch psychological realism, controversial Freudian implications and an unreliable narrator into a fusion of terror, humanity and ambiguity that works better than dozens of lesser attempts. 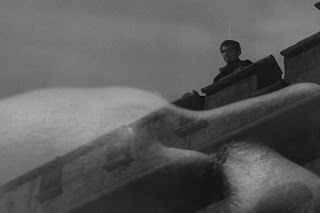 The film is not really subtle, due to the bold acting and sound mix, though I feel driven to claim otherwise. The performances are eventually thrust to the brink of hysteria, though the rise to the cliff’s edge is so gradual that it feels quite natural. The role of the kindly (though not without her limits) Miss Giddens, is the perfect unreliable point of view from which to experience the escalating tension. It becomes difficult to shake the feeling that Giddens is insane (her last act solution to the horrors she perceives is just as as illogical and inexplicable as the problem), but equally hard to ignore the formless creepiness of the children. Though Flora and Miles are outwardly charming and have a reasonable excuse for their every possible misdeed (and endearing accents), there is an unwholesome intelligence manipulating from somewhere deep within. Or am I just paranoid too?
The lack of any comic relief, distracting subplots or narrative omniscience keeps us trapped in the upward spiral of both fear and doubt. Freddie Francis pins us to the tight network of characters with invasive camera positions and uncomfortably deep focus shots (sometimes even resorting to “Citizen Kane” (1941) style matting and optical printer tricks). The crisp black and white, with strange contrasts from foreground to background, conjures a lingering sense of evil compulsions as often in bright daylight as at dusk. Long before there is any evidence of wrongdoing, and one would be hard put even to produce the evidence, something feels wrong at the manor. 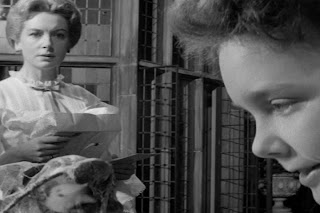 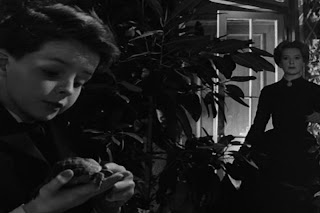 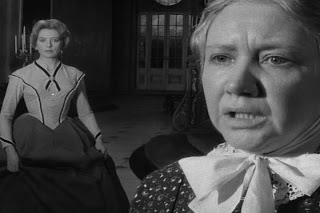 Much of the mood is derived from the sound mix. An oft-repeated children’s nursery tune pervades the film, quite memorably in a scene where Flora’s humming begins to harmonize with the rising buzz of a ghost on a rear-ground island. With versions done as a song, hum, piano piece and music box, you’ll get no shortage of innocence = evil audio insinuations. The sound crew went far beyond this, however, and included whisperings, voices, drones, ambient sounds, sudden silences and atmospheric music in dense, unrelenting layers. The mixture was so potent that “The Ring” (2002) sampled the sound mix for its haunted VHS tape. My favorite scene has the young Miles soberly reciting a poem about the undead with his pitch slightly deepened and a touch of reverb added. 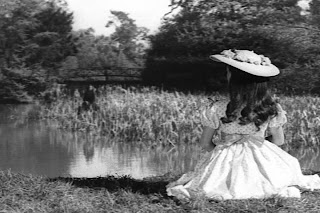 Henry James’s story succeeds by giving a wide berth to the genre staples of straightforward mystery, gory deaths, secret chambers and otherworldly special effects. When you step back from the film one realizes that it is rather down-to-Earth and realistic. Everything supernatural might have a natural explanation or at least a psychological one. Clayton plays the ambiguity at just the right volume, constantly suggesting and unsettling. The full implications are quite controversial indeed, though very little is made explicit enough for the audience to consciously think about the possibilities during the moment-to-moment tension. The director never tips his hand, never pushes the performances into camp or caricature and wisely avoids tidying everything up into a neat little ending. Though I was expecting a parade of obvious ghost clichés, I finished already excited to start again and peer into every detail.
Walrus Rating: 8.5 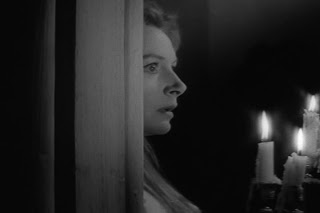 Posted by FilmWalrus at 9:01 PM

Alejandro Amenabar's THE OTHERS is clearly inspired by this Clayton's movie. Curiously, both the movies have got their stroing point in lights.

I quite agree. I think both Amenabar and Clayton possess an unusual ability to draw from children a dark tone and biting edge that is far more effective than the usual child/monster juxtoposition that gets easy scares but doesn't extend as deep as films like this.

I also liked The Others (though, um, others would disagree with me).

"Turning of the Screw" actually showed up in LOST, and now I can see the connection.

Hi Walrus...Peter Wyngarde,the face at the window!! Have you ever managed to pick up 'Night of the Eagle'..also starring Wyngarde,its worth a look.