Review of Tarkan Versus the Vikings 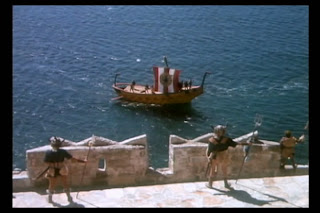 Not long ago, my experience with “The Turkish Star Wars” (1982) turned me on to the wonderful world of Turkish 70’s cinema, a golden age of outrageous no-holds action and adventure films. With modest budgets, by American standards, and freedom from censorship, copyrights, good taste and artistic ambitions, Turkey put out a wealth of cheap entertainment aimed at the young male audience. Masked heroes, lone killers, swashbuckling pirates and intrepid treasure hunters ruled the day. 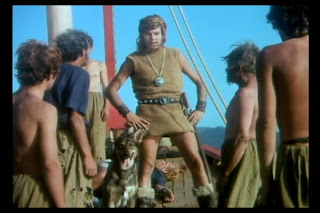 “Tarkan Versus the Vikings” (1971) is an archetypical example of those carefree days. The movie is based on a popular Turkish comic book series about Tarkan, an adventuring swordsman who was raised by wolves. In this installment (5th of 7), often considered the best of the batch, Tarkan visits Princess Yonca (Attila’s daughter) at the encampment of the Huns. Soon after, the settlement is invaded by Vikings led by the evil Tora. Tarkan is knocked unconscious and nearly killed while his beloved wolf, Kurt (which he claims is “my everything” and “more than kin” whatever that means), is killed. 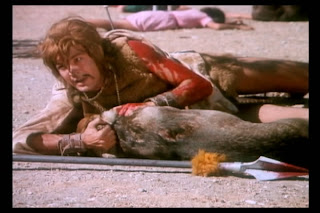 Kurt’s pup, also named Kurt, nurses Tarkan back to health. Meanwhile, Tora betrays the Viking chieftain, but is in turn betrayed by Lotus, his sexy “Chinese” ally. Lotus, with Yonca secretly in tow, crosses paths with Tarkan who is now on a mission of revenge and rescue. Tora sends an army after Lotus, but must also deal with Ursula, the daughter of the former chieftain and the angry leader of an all-female Viking faction. And so on and so forth. 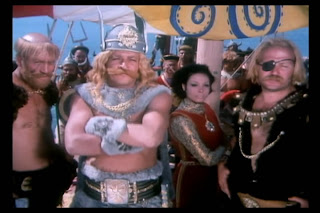 [Image: (villains from left to right)
1. A guy clearly wearing a fake bald-cap
2. Tora complete with giant mustache, winged hat and mittens
3. Lotus, a treacherous Chinese woman
4. The obligatory eye-patch-wearing right-hand man]
The plot is packed with memorable scenes and really quite well structured, but it’s too complicated to really discuss in detail here. I can guarantee rollicking battles, not-too-shocking betrayals and the indispensable histrionics where everyone looks about ready to fire lightning out of their faces. Everything is deliciously overwrought and a bit arbitrary in a way that is at once incompetent and daring compared to today’s comic book adaptations. I mean, why is that Viking chopping a little girl in half during the battle. Was the child participating in the fight? Was there no one else more strategically of value? Did he bring the child himself to kill in a demonstration of his intimidating blood-lust? 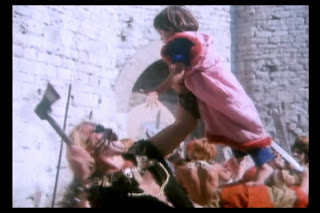 [Image: This seems gratuitously mean even for a Viking.]
The action and adventure (not to mention the violence) has a tremendous amount of enthusiasm and vigor. Even pacifists will doubtlessly find themselves caught up in the low-budget mayhem of “one-shot, one-stunt” filmmaking that features more gratuitous brawling, clashing and chopping than you can throw a tomahawk at. Though there are plenty of deaths involving pathetic minor henchmen getting shot by silent blow-darts and weakly falling to the floor (BORING!), director Mehmet Aslan adds thrills to his kills whenever possible. Hanging over a snakepit by your hair not frightening enough? How about getting menaced by a giant octopus! 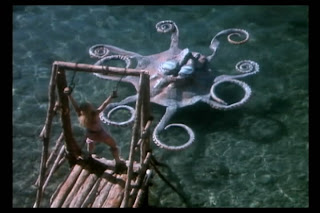 My favorite kill is the film’s final one. While duking it out in the long-anticipated vengeance battle, Tarkan throws Taro from a rooftop into the water below. How does it end? Scroll to the final screenshot for a hint.
The violence is mostly all in good fun, more like an old “Sinbad” movie than today’s uncomfortably visceral gore and savored cruelty. Aslan likes his black and white unmarred by grey; the villains tend to be so deliciously evil as to be downright lovable. Who doesn’t love it when someone lets fly their hawk to gouge out they eye of a failed henchman? In most of the swordplay it is laughably obvious that the only body part in any danger of being skewered is the armpit and although you might find more women, children and elderly at the end of the blades (which are likely to be conspicuously more bloody as well) than in your average American PG film, no harm is meant. 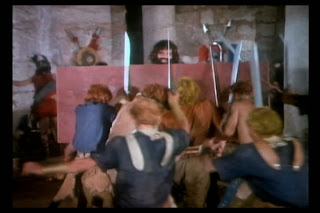 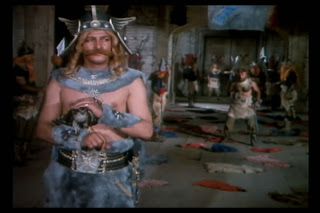 [Image (lower): Taro pets his hawk in preparation of feeding it quavering victim meat.]
However, your typical Bible belter would probably not be pleased by the number of breasts on display and it should be noted that the film is not aimed at children despite the silliness. Aslan doesn’t shy away from the more lascivious half of the Viking’s “rape and pillage” campaign nor does he shy away from the obvious box-office potential of stocking the cast with Amazonian-like warriors and belly-dancing seductresses. Progressive this movie is not, but at least equality can be given lip-service when it comes to storming the ramparts with bravery and gusto. 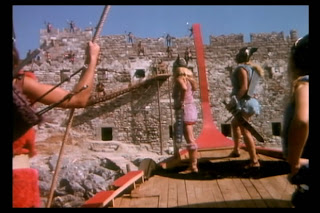 Does Aslan go too far by having the Vikings inexplicably torture their captured women by bouncing them on trampolines? Yes, but… well actually I don’t have any way of defending that. So, on to the screen captures:

Like “One Million Years B.C.” (1966) one can’t help but be won over by the campy, shameless costume design. I can understand why the women wear animal furs to keep warm, but why do they dye them pink, red and purple? And wouldn’t the miniskirt cuts and revealing cleavage defeat the protective and insulating qualities? The boots, to my untrained eye, look like they’d be useless for hiking or fighting and only practical in the off chance of a go-go dancing skirmish. 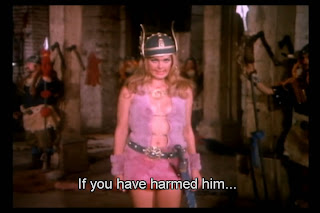 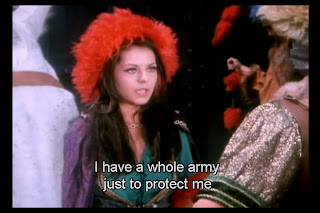 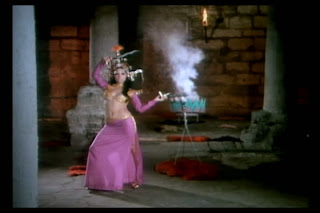 [Image: Lotus (Seher Seniz looking a little like Edwige Fenech and equally as Chinese) is only as Oriental as satin gowns, 60’s eye-makeup, dark hair and lots of imagination can make her.]

For the men, every strapping young lad gets to vicariously experience their ultimate dream: wearing a cape, eye-patch and winged helm in an awe-inspiring display of masculine glory. Ultimately, the belle of the ball is neither man nor woman, for no costume could possibly rival the enormous octopus outfit. Though under-inflated and over-used (the effects team was zealously proud), he dominates every scene with tentacle thrashing might. 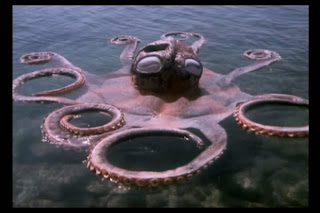 As is probably obvious, this film’s greatest advantage is its low (but not absent) budget. While there was clearly enough money to hire a huge cast, outfit them in outrageous costumes and then film them swatting at each other with wooden weapons, there was thankfully not enough to bestow any dignity or artistry upon the proceedings. The result is extremely watchable since the minimal production values never lead to drabness or narrative lulls. You won’t find much technical know-how or deep meanings but there is a crude sense of framing and an admirable lunge at fight choreography.

The music consists almost exclusively of three tracks. Two of them are stolen from other movies (the third one might be as well) and all of them surge with grandiosity, ensuring that every battle gets boss battle treatment.
Propelled by enthusiasm, indulgence and ingenuity (one of the “special effects” involves turning the camera sideways to show Kurt climbing out of a deep pit) “Tartan Versus the Vikings” makes for an excellent roll in the Elysian fields of adolescent male fantasy and Euro-trash kitsch. Mondo Macabre, a dedicated distributor that is one of my fast-rising favorites, has released the film as a double-feature (with the far inferior “The Deathless Devil”) so there is no reason to miss out! 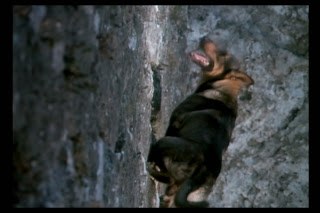 [Image: Little Jimmy falls in the well. Lassie goes running for help (the coward) while Kurt dives in, ties a harness around the boy and scales the wall!]
Walrus Rating: 7.5 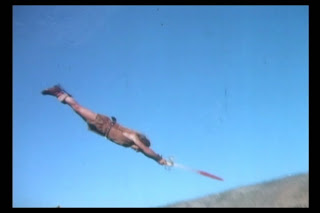 Posted by FilmWalrus at 1:00 AM

Unrelated comment: As soon as I see Control, I will review it. I have no qualm with reviewing anything music-related, be it a concert, a bootleg, an album, a single, a b-side, a career, an entire tour, a movie, a soundtrack, whatever. I'm excited for the movie, as you might be able to guess.

"every strapping young lad gets to vicariously experience their ultimate dream: wearing a cape, eye-patch and winged helm in an awe-inspiring display of masculine glory."