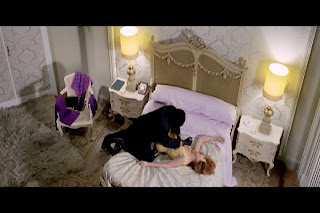 Luciano Ercoli is best known (to the few who know him) as the director of a pair of well-titled gialli featuring Susan Scott: “Death Walks on High Heels” (1971) and “Death Walks at Midnight” (1972). With a DVD two-pack available, fittingly from a distributor called No Shame, I decided to give them a try. After viewing the first of these films I can understand how Ercoli failed to become a household name, but he puts in an ambitious effort and entertains better than I expected.

The picture opens with Mr. Rochard, a mysterious man wearing an eye-patch (really the eye-patch makes “mysterious” redundant) getting stabbed in a train by I masked killer bent on getting a handful of diamonds, themselves stolen by Rochard. 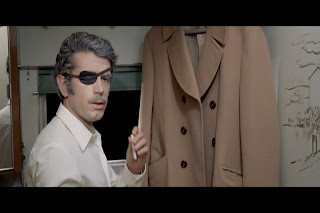 When we are introduced to Susan Scott, she’s being interrogated by the police as his daughter, Nicole Rochard, although she claims not to know anything about the diamonds. Nicole ends up being the protagonist for the first half of the film, with the narrative impetus coming from two detectives, Inspector Baxter (Carlo Gentili) and Captain Lenny (George Rigaud) in the second half. 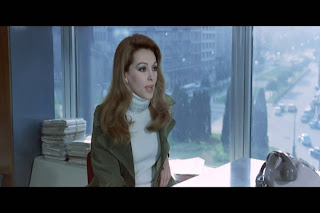 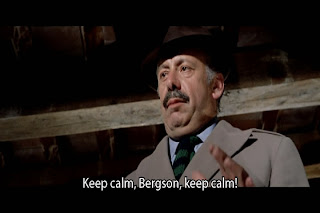 Nicole spends the first twenty minutes of the film making sure the audience knows that she doesn’t have any tattoos in not one, but two, tedious nightclub routines. Some truly ill-chosen wigs, a fistful of zooms and the dated psychedelic music make sure that no one watching these scenes in the 21st century gets much more than kitsch out of them, but many (film scholar Gary Needham included) have proposed that the sheer silliness of such indulgences and the outrageousness of the costumes became at least as much of a draw as the presumed erotic effect. Keep an eye out for the preponderance of fuchsia outfits that overtake the bad wigs. 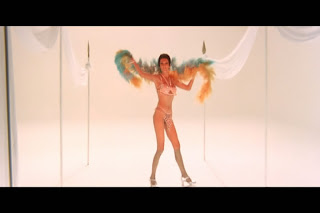 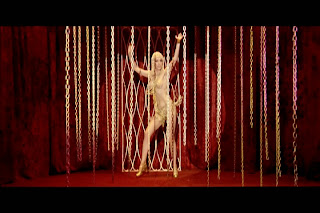 In some ways it’s a minor shame that the Ercoli wastes so much time on the early exploitive material and then fazes Scott out in the second half, since she was eager to unseat Edwige Fenech as the reigning giallo scream queen. In the space allotted her to shine in “Death Walks on High Heels” she does a fine job, at least as talented for the little range required as Fenech and a knockout beauty. 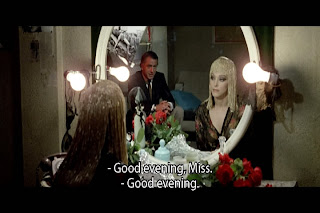 The story doesn’t really get started until Nicole is attacked by the blue-eyed masked killer and threatened by an electronically scrambled voice. She seeks comfort in her drunken, madly jealous boyfriend, Michel (Simon Andreu), but he doesn’t exactly endear himself. In fact, he throws a knife across the room into her wardrobe inches from her face; the first in a series of fake-out scares that deserve laughter and applause purely for their contrived extremism.
Later, Nicole will overhear a creepy electronic voice saying “I’ve been looking for you for a long time” only to discover that it’s a priest with a voice assistor talking on a nearby phone. (You know, the type of coincidence that happens all the time.) My favorite red herring is a ridiculous false lead played with utter sincerity: a bleach-blonde, arched-eyebrow ogre with a gloved metal hand and a cat that he pets in a sinister manner as he glares at Nicole. How can you not love that? 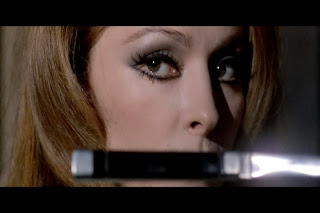 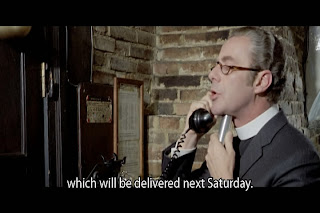 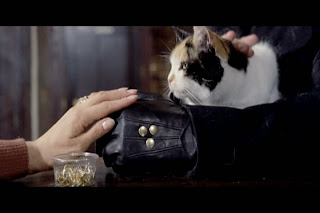 [Images: Fake outs and red herrings that are so bad they’re good.]
It doesn’t take long for Nicole to run frantically away from Michel’s house and elope with the slimy Dr. Robert Mathews (Frank Wolff) who she met filming her at a strip club. Why would she flee into the arms of a notorious married playboy with a fetish for boots a fancy for foreign women? A montage in her boyfriend’s bathroom helps explain:

In the possession of the brown-eyed Michel!

Surely he must be the masked killer, betraying her love to get at the diamonds!
It soon appears that Nicole has made the right choice, considering that Dr. Mathews flies her to his glorious seaside villa, takes her on a whirlwind shopping spree (an irresistible chance for yet another sequence of male gaze and 70’s Italian fashion) and treats her to a hilariously erotic meal where she eats greasy chunks of fresh fried fish and washes her hands in rose-petal water. One gets the impression that the screenwriter designed the scene based on a vintage magazine’s idea about the ultimate British date. 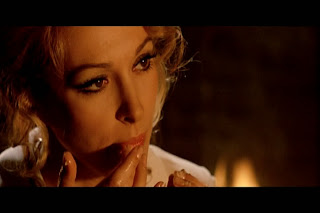 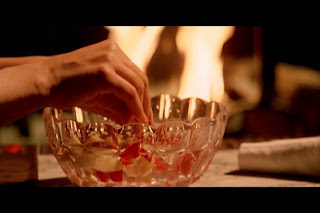 The days of hedonistic pleasure can’t last forever and soon Dr. Mathews is called away to London. While working on curing a blind man at his ophthalmology clinic, Mathews is shot by someone wearing high heels. What appallingly poor luck that the only witness is blind! Meanwhile, Nicole has disappeared and resurfaces in shocking circumstances. Corpses increase inverse proportionally to the suspect list until the truth comes tumbling out in the wickedly satisfying conclusion. 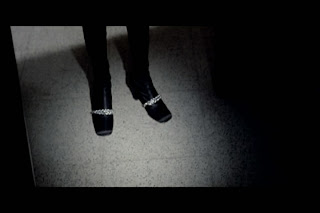 [Image: The title warned you. No points for the lighting director who is clearly using a flashlight.]

Much like “The Strange Vice of Mrs. Wardh” (1971), also penned by screenwriter Ernesto Gastaldi, “Death Walks on High Heels” brings together a well-orchestrated finale that shows ingenuity, foresight and a combination of well-crafted layers. The problem with both films, particularly this one, is that the first half of the film is nearly empty of interest, filled for utilitarian sake with the obscure clues, character backgrounds and plot setups that will payoff only in the last act. At 108 minutes, the film is far too long and there is absolutely no reason not to be choosier in the editing room concerning the first half of the film.

The casting is spot on with acting that saves many of the scenes from the embarrassments that they could be, although Inspector Baxter is so wooden and incommunicative that he frustrates more than he investigates and gets outshone by the peripheral figures. Despite the reduced presence of Susan Scott in the second half, it’s there that the suspect roster really fills out to the benefit of the mystery. It becomes simultaneously amusing and baffling how everyone in the tiny fishing village where most of the action takes place comes off as so secretive and scheming.
Ercoli is far from a hack director (despite the claims of many critics) and while he lacks an evenhanded pacing and the ability to squeeze A performances from B actors, he admirably cultures a visual talent that has plenty of potential. I almost feel that the director has been unfairly punished for not taking his camerawork quite far enough, for despite plenty of filler sequences of bland conventions and sloppy focus all the hallmarks of a burgeoning giallo master are present. I’d even go so far as to say that the filmmaking is above the level of the average Lucio Fulci feature. To honor the unsung work of Ercoli and his cinematographer, Fernando Arribas, I’ll distribute some fictional awards:
Best Window Shot: (How can one not appreciate the little touches like how ridiculous the chair is and the way see-through black lingerie hangs from both the lamps.) 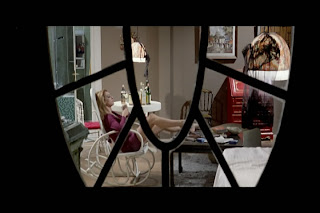 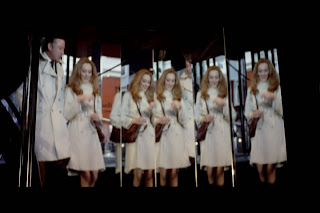 Best Masking Shot: (Following the single really brutal death sequence tossed rather conspicuously to the gore hounds in the audience) 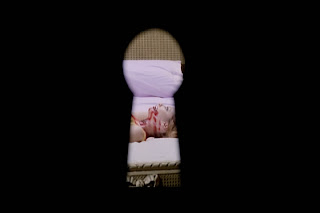 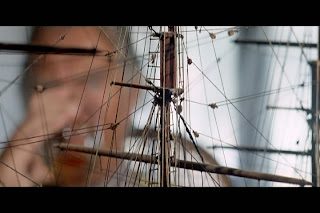 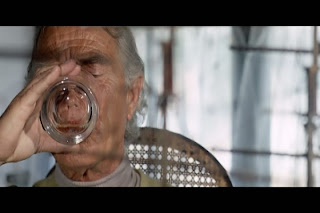 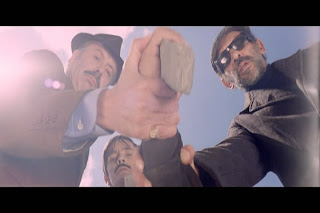 It may be a long shot, but I can’t help feeling that the film is only a good editor away from being a great giallo. As it stands, the film is a moderate success with moments of inspiration and a stellar final ten minutes. Cap it all off with some minimalist box art, an amazing trailer (don’t miss out on it) and a decidedly flirtatious final image between the detectives (WHY?) and you get a giallo DVD two-pack that just might be worth the investment. I’ll get back on that after I see “Death Walks at Midnight.” 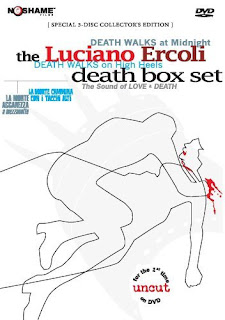 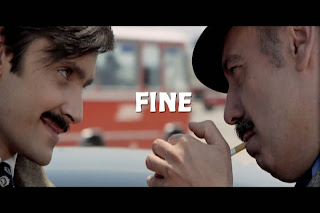 [Image: The most meaningful stares in the film have nothing to do with the villain…]
Walrus Rating: 6.5 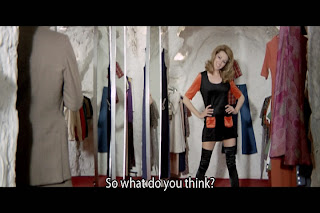 Posted by FilmWalrus at 7:41 AM

I love the silly awards. You should do that more often when you have a movie that fails overall but does some things excellently.

I agree with the awards. Also... that detective duo shot cracked me up so much. Weirdest innuendo to throw in at the last moment.

Jesus Christ, those detectives. And their FACIAL HAIR.

An extremely charming Giallo chock-full of more plot twists and red herrings than you can shake a stick at. It's truly one of the highlights of this particular sub-genre of horror.