Review of The Killer Nun 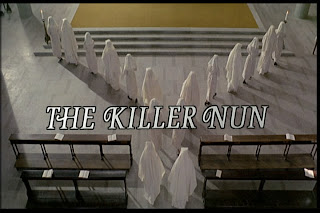 To say, offhand, that “Killer Nun” (1978) is one of the best of the nunsploitation subgenre would imply two incorrect things: that I have seen enough nunsploitation films to judge and that it is an overall good movie. I will say that “Killer Nun” surprised me by not being nearly as inept as I was prepared for and I was thankful that the exploitation is rather tame with quite a lot of the attention being placed, happily, on a giallo-esque murder/insanity mystery.

A little background on nunsploitation, the genre came to fruition in the 1970’s particularly in heavily Christian European countries although examples exist in the US and Asia. The focus is usually on young attractive nuns who overcome the repression and oppression of convents, religious rules, patriarchy and social conventions regarding women. This often, but not always, involves an awakening to sexual freedom or the voicing of a dissenting opinion. The films range from outright pornography to “high art” (Ken Russell’s 1971 “The Devils”). Most of them are set in medieval times with the inquisition being a favorite focus. “Killer Nun” is an exception, being set in the present day.

The story (purportedly based on a real life newspaper headline) concerns Sister Gertrude (Anita Ekberg) a well-regarded nun at a hospital for the elderly and insane. A series of confession booth monologues cue us to a past sexual abuse and a desire to “destroy all men just as they destroyed my happiness.” A bizarre flashback/hallucination/nightmare informs us that Sister Gertrude has recently undergone an operation on her brain tumor. 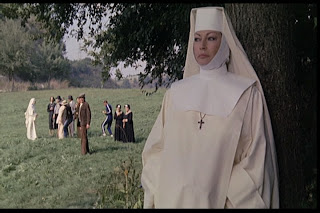 She begins to have fits of rage (stomping to pieces the dentures of one of her patients and forcing her elderly exercise group to exhaustion with military zeal) and self-medicates on morphine, both of which hurt her popularity at the hospital. In what appears to be a haze of madness, she kills her patients in painfully graphic ways. The mother superior initially refuses to help Gertrude, telling her that it’s the duty of a nun to suffer, and by the time she is moved to action it is too late to do anything but cover up the scandal. Though Sister Gertrude is ultimately “dealt with” many lives have been lost and a cynical ending twist reveals that order has not been restored to the order. 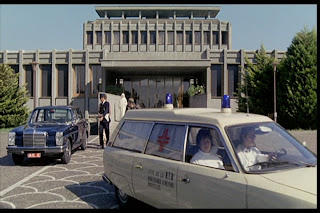 [Image: Giulio Berruti filmed at an actual active convent and kept an alternative script around to fool the priests and nuns about the story they were shooting.]
Italian sex icon Anita Ekberg had fallen along way since her “La Dolce Vita” (1960) days, but she had more name recognition and box office draw than the rest of the cast put together. Her acting is not altogether impressive, but she pulls off malicious glee and complete insanity quite well and fills in the rest of the time with confusion and aloofness. Unfortunately she has too dramatic of a face (not helped by makeup more befitting a prostitute than a nun) to make the part believable yet is far too old and haggard to be marketable as exploitation material. 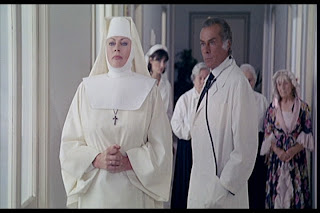 The limbo status as neither fully socially aware drama nor bottom-rung trash works somewhat to its advantage for it grabs at occasional opportunities for both. The director, Giulio Berruti (a former altar boy), claims he held back the sleaze out of respect (and an all-out crush) on his leading lady. That isn’t to say that the film doesn’t have Sister Gertrude witnessing an act of wild sex on a stormy night, instigating a lesbian nun-on-nun encounter and prowling the streets in a leather coat looking for anonymous sex; it just means that there’s less nudity than you’d expect and the sexploitation is mined for tiny veins of psychological insight. Alida Valli, who played the mother superior, primarily objected to the script because her character eats candy in bed. 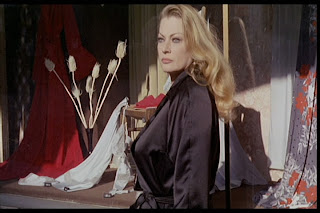 Ekberg taking to the streets for a male lover constitutes the film’s lowest point, coming off as unmotivated and dragging the narrative to a total halt for the type of grainy, uninspired thrills that even grindhouse fans are likely to shake their heads at. The violence is rather more effective and integrated with plenty of eye-covering gore scenes that make interesting use of hospital supplies. A cotton swab murder is probably the most creative although one involving needles and pins will certainly derive chills with a bonus courtesy of the cross-editing that implies a measure of voodoo power. 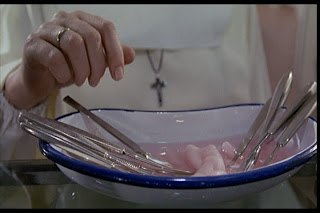 Giulio Berruti is a far cry from a good director and the pacing, acting, mise-en-scene, tone and visual creativity all suffer as a result. Fortunately he does have an eye for subversive meanings, particularly his insinuations that the drug experience and the religious experience are closer than the clergy could comfortably admit. We are constantly left to wonder whether Gertrude’s psychotic behavior is based in religious repression, medical derangement, a morphine addiction or a past trauma. A shot wherein Gertrude appears to raise up a morphine needle in a grim echo of the consecration of the host must surely have rankled religious censors. 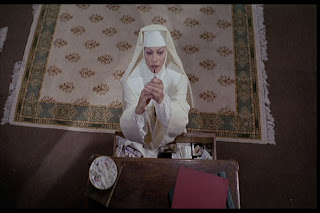 For all the botched work in the film and its backbreaking burden of a central act, Berruti does manage to make some moments really come together. Often these are aided (or entirely carried) by the audio; the music composed by Alessandro Alessandroni. Mixed in with expected horror twists on choir music and chanting are Golbin-esque riffs on the electric guitar and ominous bells and percussions. One shot with an effective sense of swelling supernatural evil has the camera dolly slowly backwards down a hall while benevolent prayers are amplified into ear-splitting accusations. 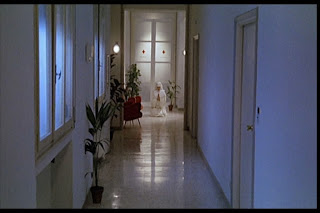 Berruti also assays a fine twist ending with a truly pessimistic tone. [SPOILER here to end of paragraph] With the supposedly guilty party medicated into a mental prison, the camera repeats a shot similar to the opening confession between a nun and a priest (a pleasantly symmetrical bookend). As the camera dollies backwards we see who the real killer is, confessing to the brutal crimes with sadistic exaltation. As darkness fills the edges of the image, we see that the priest’s booth is empty and that the confession goes unheard. 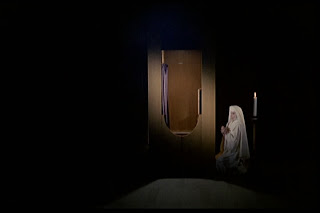 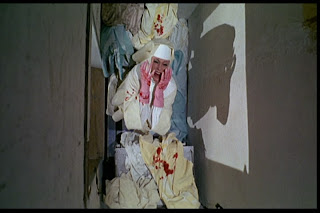 Posted by FilmWalrus at 1:17 AM

It pains me intensely that blogspot / blogger has arbitrarily chosen NOT to show the majority of your pictures now. Sad. I'm sure they'll be back up later.