Review of The Desert of the Tartars 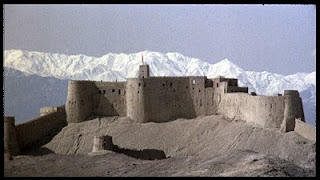 “The Desert of the Tartars” (1976) was the last film by Italian director Valerio Zurlini, whose work I’m not familiar with, and although the movie’s reputation has faded, it is still quite capable of fascinating and mystifying. “Fascination” might seem a rather strong word for a film that is so stubbornly slow, long and uneventful, but its measures are divided with thematic and stylistic rhythms in mind with an ambition that I found easy to appreciate. The result is something like an epic story of wasted lives, told amidst the beauty and emptiness of sand and stone. 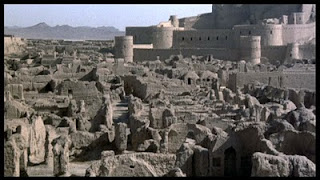 Lt. Giovanni Drogo takes up his first commission at Bastiani Fortress, an obscure outpost on the fringe of an unspecified empire. The fortress lies between a forbidding mountain range and a vast desert, both of which present such logistical difficulties for a crossing army that the oversized border fortress seems a ludicrous redundancy. Despite rumors of a force gathering in the distant north kingdom (beyond the desert) and of Tartar warriors that ride white horses amidst the sandstorms, no enemy is ever seen except as indistinct figures in the distance. 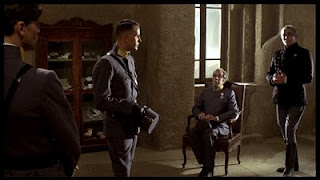 Yet all the men (the film’s only woman appears but briefly in the first scene) within the rigid hierarchy of officers are, each in their turn, seduced by the paranoia of a mounting threat that never materializes. Drogo finds that military life at Bastiani is not what he dreamed; there is no chance for glory and only an endless restless watchfulness and aching unsatisfying boredom. His first reaction, and his wisest, is to leave, but his sincere regard for courage, commitment and camaraderie cause him to doubt. Opportunities slip by. Circumstances align against him. As the years pass on quicker and quicker, he bids farewell to superiors who lead with varying degrees of success and leave with varying degrees of regret. As he rises through the ranks, Drogo longs for the moment where he can redeem the sacrifices he has made in a tangible confrontation. The moment always lingers just beyond the horizon. 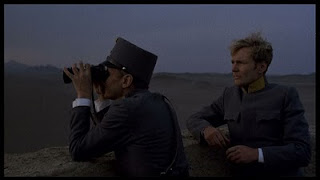 Depending on how existential you’re feeling, the film can be read as a simple critique, even a condemnation, of the sterility of military life or as a more wide-reaching parable about the meaninglessness of human endeavor. The senseless of military discipline and obedience to rigid protocols is exemplified by Mattis (Giuliano Gemma), an officer who marches a sick man to death on a snowy peak, applauds the shooting of a friendly soldier for not knowing the correct password (despite being recognized) and who forces a disobedient platoon to stand without food until they begin to collapse. 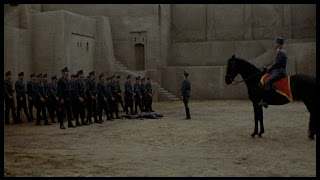 The distinctive thing about “The Desert of the Tartars,” however, is that it doesn’t laugh, or even crack a smile, at the absurdity of war in the manner of films like “Catch-22” (1970), “MASH” (1970) or “Oh! What a Lovely War!” (1969). Nor does it emphasize the brutality and violence of war, as no actual combat takes place. The film simply exposes the self-aggrandizing gentility and paranoia of obsessive military vigilance as a sort of psychological illness, where the only battleground is in the mind and the struggle for peace and sanity is much more abstract than what the soldiers are trained to deal with. Again, Mattis, who vents his barely-concealed bloodlust in boar-hunting and sadistic treatment towards his men, is the key example. 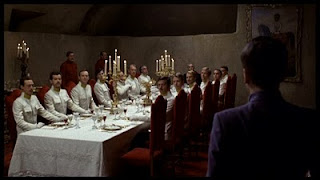 [Image: Formal dinners provide an outlet for pomp, albeit in a static, stationary setting.]

The psychological angle, however, remains largely an issue of undertone and understatement. Characters are driven to illness, murder, suicide and madness by the endless waiting, but all in an atmosphere of suppression and aloof dignity that glides quietly over personal crises. The structure of the films fails to sustain ongoing tension and instead mounts upward for a brief episode and then diffuses again (perhaps intentionally frustrating us the same way the officers are frustrated). Zurlini opts for a slow burn, which I respect, but I wish he would eventually turn the temperature much higher than he ever goes. I would have, at least, preferred him to leave the ending more ambiguous, with the audience given more freedom to decide how much of the final developments are purely Drogo’s delusions. 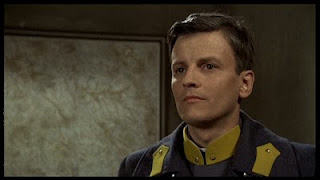 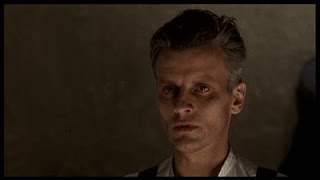 [Images: Perrin does a fine job conveying the way that Bastiani wears away Drogo's mental and physical health, though the film is a little too lopsided in piling the bulk of his deterioration into the last act.]

The subdued tone that the film adopts also tends to squander the ridiculously high-profile cast. For a film that was often overlooked outside of Italy until NoShame put it out on DVD, the cast includes a remarkable amount of international talent: Jacques Perrin (France), Jean-Louis Trintignant (France), Max Von Sydow (Sweden), Fernando Rey (Spain), Vittorio Gassman (Italy), Philippe Noiret (France) and Helmut Griem (Germany), some of whom, like Rey and Noiret, are thrown away on underdeveloped roles. 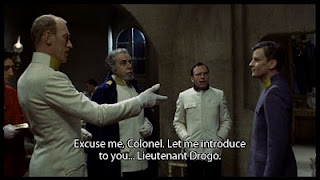 What Zurlini fails to squeeze from his actors, however, he makes up for with landscape. The fort, the mountains and especially the desert are for more compelling than any given character in his film. Luciano Tovoli's cinematography stares down the terrain with mute gravitas and paints it effortlessly with the burning chalk-brown of daylight and the soft purple-grey of twilight. Filming in Arg-e Bam, Iran, Zurlini and Tovoli make spectacular use of the ancient ruins, tapping their labyrinthine desolation as an Ozymandias-esque metaphor for the futility of man in the face of eternity. 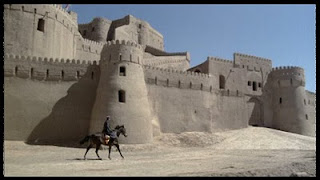 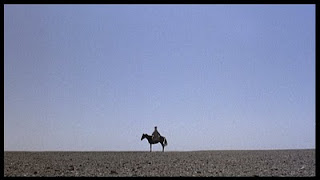 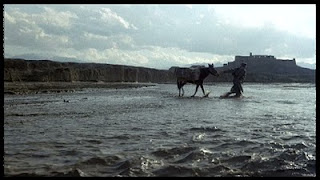 [Images: The heavy use of lone figures dwarfed by lonely ruins and receding horizons is said to be inspired by the work of Giorgio de Chirico, which is how I happened to hear about the film.]

Nor does Zurlini skimp on panning across the wind-swept wasteland to awe us with the expanse that nothingness can fill and to humble us with the majesty of nature’s inhospitable frontiers. More so than “Lawrence of Arabia,” this film reminds me of something like “Woman in the Dunes,” with its dreamlike existential atmosphere that invokes horror more often than beauty. Also like “Woman in the Dunes,” I feel irresistibly compelled to read the book, written by Dino Buzzati in 1940. 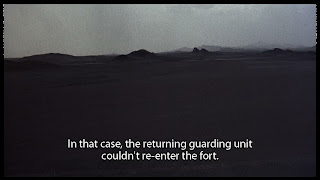 If the memorable use of widescreen landscapes and the precise choreography of soldiers in spotless attire are easily the strong points of “The Desert of the Tartars,” the major weakness may well be the audio. The usually reliable Ennio Morricone (everything) provides some decent tracks, but they are too mellow and elegiac; nothing as evocative and moody and the film requires. Not only could we use a great deal more brooding, unsettling instrumental music, but a layered soundtrack capturing the ceaseless wind and dry echoes that surely haunt such a place could have gone a long way towards driving the atmosphere and tension that too often remains incomplete. Instead, long silences and a relatively scanty, purely utilitarian soundscape contribute the film’s occasional inability to sustain its powerful concepts. It’s a major opportunity missed. 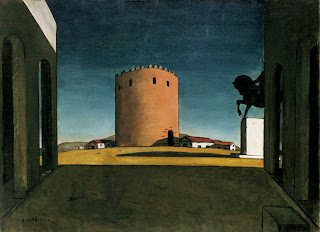 [Image: "The Red Tower" (1913) by De Chirico. Used as the cover the novel's English translation.]

Posted by FilmWalrus at 4:14 PM

"The usually reliable Ennio Morricone (everything)"

I'm gonna put my film snob cred on the line by saying I've never really cared that much for Morricone.