Review of Fruit of Paradise 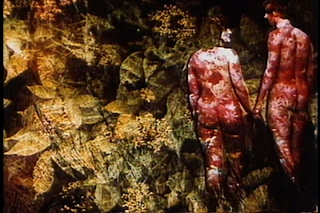 Adam and Eve, bathed in glowing textures of leaves, pebbles, flowers and bark, descend a grassy slope and slip into a pond. Their movements are tentative and yet stiff and choreographed. They wear nothing, but are wrapped snuggly in double-exposures of nature-imagery tinted in bright autumn colors. Passages from Genesis are chanted as part of the angelic score. 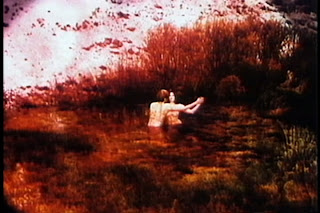 This prologue to Vera Chytilova “Fruit of Paradise” (1970) might easily serve as a standalone short, but it also works as a fitting introduction to this odd adaptation of the Biblical fall. It confirms Chytilova’s commitment to powerful visual impressions, multilayered freeform symbolism and winking witty anarchy. “Fruit of Paradise” is an experimental film that speaks in a similar visual vocabulary as “Daisies” (1966), the audacious era-defining Czech film that established Chytilova’s reputation, but without really feeling like it repeats itself. 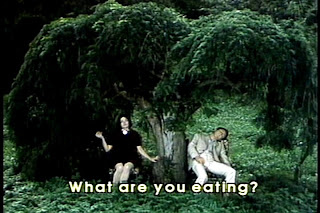 The film follows Eva’s relationship with two men after she bites into forbidden fruit under a tree at a gorgeous garden retreat. Her stern husband finds little joy in the overgrown paradise and frequently flirts with other vacationers. The handsome if rather menacing Josef is an increasingly preoccupation for Eva despite his own incessant flirting and her growing certainty that he is a deranged serial killer. As she spends her days lolling on the beach, frolicking through the underbrush and exploring shady nooks, she feels the growing pressures of love, freedom, danger and temptation. 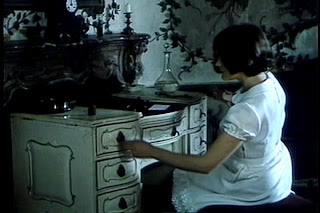 Following “Fruit of Paradise” as a conventional story, say a love triangle or a murder mystery, is almost entirely impossible. The narrative progress is much like an extended camping trip, with plenty of room to play around and little need for drama or dialogue. The tone is usually lighthearted, to the point where scenes that would typically involve tension or fear are subverted. Joseph, in particular, bounces back and forth from jolly skirt-chaser to intimidating villain quite erratically. 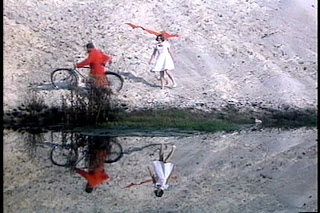 That’s not to say that the film is in any way boring. The surreal carefree atmosphere is quite welcoming, and draws the viewer into Eva’s miniature ambling adventures. Her curiosity and mischievousness are infectious.

Meanwhile, Zdenek Liska’s rapturous nearly wall-to-wall score envelops us in an unfettered, often exuberant, soundscape where harmonized voices or lilting instruments sound off at the slightest provocation. Taken along with his work for Vlacil’s “Valley of the Bees” and “Marketa Lazarova,” Liska is becoming a fast favorite for me.

After the first few loosely-connected episodes the feeling of confused anarchy gradually gives way to an understanding of the underlying organization. Scenes are constructed around visual motifs, based around bold points of contrast nestled within the sand and stone or the grass and leaves. Sometimes these contrasts might be built around the shock of seeing elegant Victorian furniture in places more suitable to park benches. 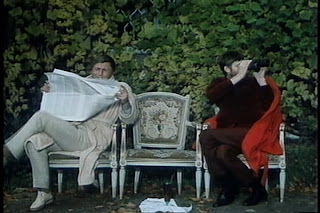 Occasionally the contrasts are based around movement, like a biker or frolicker, passing through the leisurely stillness of nature. Usually Chytilova has figures move in fluid graceful arc, fitting with gentle winds and unrushed pace, but sometimes she drops frames or manipulates the speed to make the characters seem like jerky marionettes. 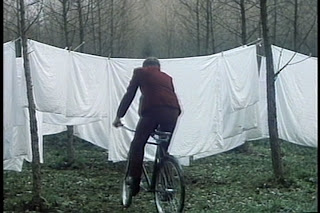 Most often, the contrast is a spot of bright orange or red set against the greenery. 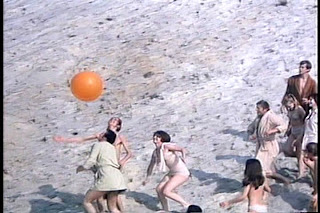 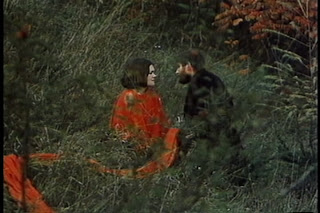 These sharp highlights not only guide the eye, they are also central to shaping our mood, emotions and even our interpretations. Chytilova is confident enough in her style to accept the ambiguity this creates, since reactions to such compositions necessarily vary from viewer to viewer. There are many occasions where objects are clearly meant to have very specific meanings, but it’s the visual presentation of the objects that tells us how to interpret them. 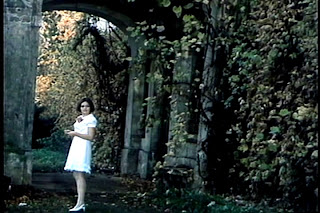 As an example, one might take a scene where Eva violently plays the drums in a dusty attic. One could certainly ask “What do the drums mean?” especially since they don’t’ seem to fit with the other props we’ve seen in the film. Still, I think a better avenue towards understanding is to ask “How does it feel to play the drums?” and to examine the visual and aural sensations that Chytilova is trying to convey. 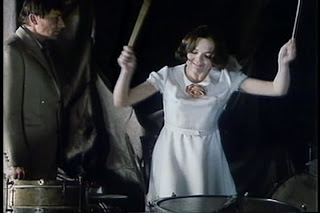 Unraveling the allegory at hand might at first seem to be quite exhausting, but Chytilova doesn’t ask us to switch into academic mode to enjoy or even understand the film. I think there’s quite a few forbidden fruits planted for the audience to savor, particularly a gleeful hedonism for texture, detail and music. The religious references are not to be thrown away, but they are there more to shape our interpretation rather than to define it; to set our minds in motion rather than to nail it in place. 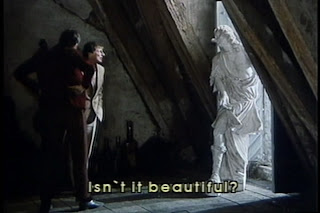 I like to think of Chytilova’s style as a combination of “universal” symbols and personal inflections where cinematography literally colors our interpretation or potentially undermines it. This helps explain the way a single symbol-object can have two or more potentially inconsistent meanings for the director. One example is the way “forbidden fruit” is used as a mark of rebellion and transgression in “Daisies” and as a symbol of awakening, temptation and disillusionment in “Fruit of Paradise.” Sometimes the connotation of a symbol can change many times within a single film. 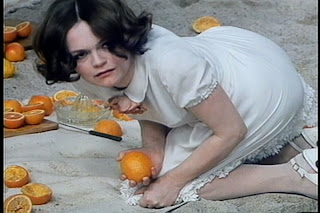 This is part of why I feel the director’s films resist straightforward feminist readings. As a female director who prefers female protagonists and adopts many of the stereotyped mainstays of feminist art (nature themes, sensation-driven narratives, anti- institutionalism, rejection of psychoanalytic theory, etc.), Chytilova is too often pigeon-holed as purely preoccupied with gender issues. Like most surrealists, I think she has eclectic interests and multiple goals, many of them quite nuanced and personal. In appreciating her films, one must be careful not to warp her intentions in the places where a classical feminist mold doesn’t fit.

If you’re a fan of “Daisies,” or the brand of visually accomplished surrealism I’m often advocating (“Valerie and Her Week of Wonders,” “The Hourglass Sanatorium,” “Eden and After,” “El Topo,” “A Zed and Two Noughts,” etc.) then this is another film worth checking out. This formerly very rare film is now readily available through Netflix thanks to a not-to-shabby release by Facets. 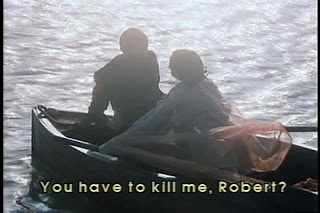 Yes, I feel quite the same about not categorizing her movies as "feminist-tainted" ones. I wouldn't even have thought of it, actually.
I absolutely loved this film, yet was a bit puzzled with the end... I guess I started seeing it as a daily life scene stripped from all the other elements that make it so oneiric. Why bounced back to Joseph? Well, maybe one needs to re-watch it from time to time as one gets older.