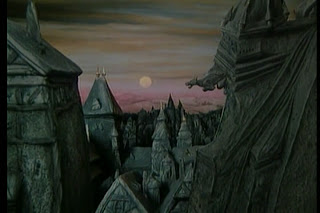 Jiri Barta’s 1985 “The Pied Piper of Hamelin” (aka “Krysar”) is probably one of the only film that can be categorized as woodmation. Eschewing the smoothness and elasticity of clay, Czech stop-motion innovator Barta had thousands of characters, props and sets hand-carved in jagged, rough-hewn wood for his unusual fantasy-horror masterpiece. Filled with false perspectives, oblique angles and impossible vantages, Barta’s film takes the Grimm Brothers tale through cubism and German Expressionism while leaving a distinctly Czech flavor. 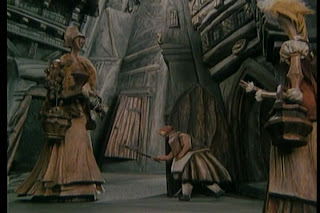 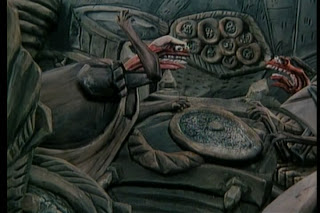 The core of the original tale remains, with a mysterious piper enchanting a rat infestation into the river and returning for his reward. However, the beginning and end are altered to give the story a darker hue (opposite of most fairy tale adaptations) and a more barbed message. Barta depicts Hamelin as a greed-ridden den of petty misers, operated by the mechanical gears in a mountainous clock tower and greased with the currency of commerce and corruption. In the grey bustle of this soulless miniature capitalism, humanity has been twisted into monstrous caricatures. 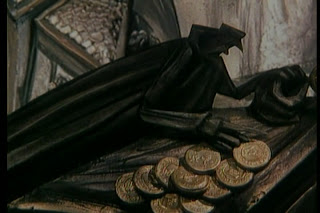 Rats borrow through the crumbling foundations of the village, symbolically nibbling through the town crest, feeding on the abundant waste and stealing from the covetous natives. One morning the rats overrun the city completely, but the ribald royalty is too torpid to react. 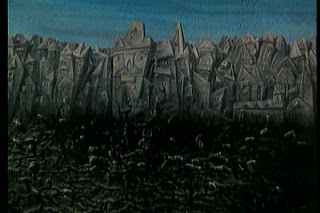 [Images: (Top) A side view of the rat population borrowing under the village proper. Plenty of loaded greed-erodes-the-foundation-of-society visual metaphors to go around. (Bottom) A butcher fends off a surge of bloodthirsty rats.]

The Pied Piper arrives, a lone hooded figure on a nearby hillside. Wailing electric guitar distortion heralds his windward entry into the village. He demonstrates his musical magic before the unctuous king, who offers $1000 in exchange for purging the vermin outbreak. Hundreds of drowned rodents later, the town returns to its avarice and vice, but the king refuses to lighten his coffers for the savior. 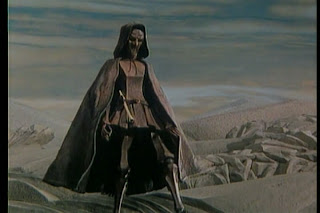 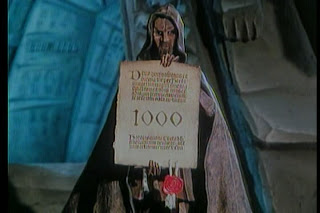 [Image: Sooner or later, everyone must pay the piper…{cue electric guitar solo}]

In the original story, the piper waits for townspeople to go to church and then enchants the children into a cave from which only a single child escapes. That’s pretty grim, but Barta’s version has an even more dark and mythic tone. The piper marches by torchlight into the upper spires of the giant mechanical cathedral that dwarfs Hamelin. There he holds a whispered moonlight consultation with a deathlike statue of Jupiter who halts the flow of time with his primordial hourglass. The waking townspeople are greeted not by the sun, but by the vengeful notes of the piper, transforming them into rats and compelling them towards the same aquatic demise. 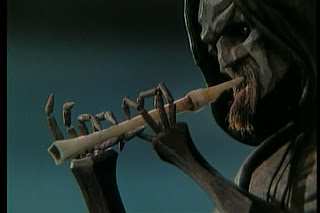 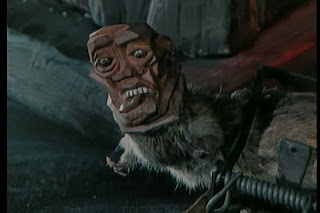 In the wind-swept emptiness left behind, an old fisherman who watched the events unfold from afar enters the city guided by the cries of an innocent infant who was spared. The Pied Piper vanishes, his cloak left behind to flutter into the air. 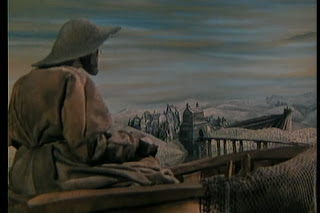 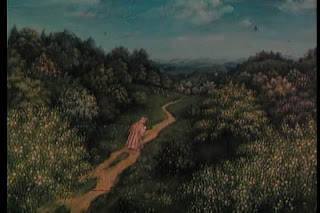 [Images: The fisherman takes the child out of the dead city and towards a verdant dawn in typical Biblical fashion.]

Giving the classical tale an anti-capitalist overtone is typical of Barta’s work, which is available on the DVD collection “Jiri Barta: Labyrinth of Darkness.” There is a harsh denouncement of consumer society in almost all his shorts (at 53 minutes, “The Pied Piper of Hamelin” is his longest), although it is often softened by his love for novelty and whimsy. Depending on your perspective, his work is not necessarily political in nature, with the focus usually geared towards the essential opposition of humanism and materialism. Greed, habit and conformity are always shown as destructive forces, a message which could be regarded as a critique of either American or Eastern Bloc societies.

The vice and wickedness sequence that launches the film does indeed harp for a little too long, but the film builds momentum. The story never quite catches up to the presentation, but it makes a good fairy tale frame for the amazing handcrafted woodwork. Everything from the slashed-up set design to the repugnant villagers exudes personality, coming out like a cross between “The Cabinet of Caligari” and the “The Nightmare Before Christmas,” but with a startling originality and tactile quality of its own. 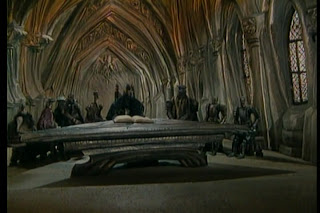 Barta has a strangely omniscient power behind his cinematography, often showing cut-away profiles of the village, overhead views of the town square and the secret moments of lonely misers stacking, tabulating and hoarding their coins. His artistic choices show bold individuality (a characteristic often offered as the antidote to his dystopic visions) and an ability to break in and out of the stop-motion medium to get the effects he desires: the scrabbling of live rats, the oozing of a broken egg and the blooming of color in an unexpected animation sequence. Barta does things like dramatically varying the relative size of the rats (so that they are sometimes almost human-height) to create striking, disorienting scenes. 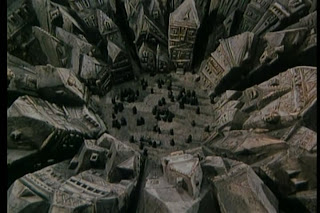 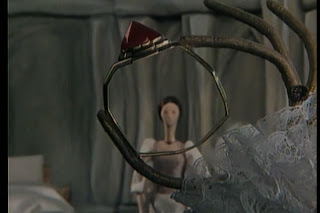 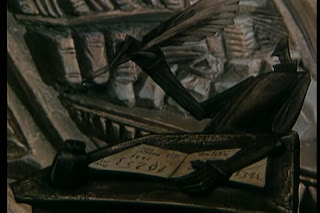 [Images: Examples of Barta’s unusual forced perspectives and visual distortions. Note, for instance, the size of the ring relative to the fingers presenting it.]

Another oddity that invites investigation is the untranslated pseudo-language that Barta employs. Dialogue is quite convincingly unnecessary for this tale (and would likely risk dispersing the delicate antiquated atmosphere) since the use of emotive mise-en-scene, exaggerated gestures and inflections and careful storyboarding guide our attention. 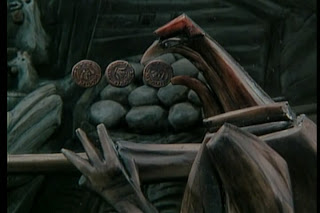 [Image: One method for getting around dialogue is seen in a haggling sequence, in which both parties spew imaginary coins from their mouths to fix the price.]

Considering that I was scared of the ex-Disney, G-rated “The Secret of NIMH” as a kid, I would recommend not putting this one in heavy rotation for the little tykes. Shots of bloody rat corpses, drowning rodents and a subplot with a heavily-implied rape-murder probably make that a no-brainer, but it’s really the merciless tone, unrelenting pessimism and unpleasant imagery that make this one potentially traumatizing. 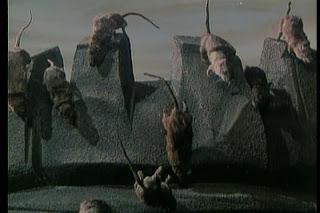 But while this might not have the crowd-pleasing factor of “The Lion King,” it is definitely a must-see for grown-ups with an interest in stop-motion. Fans of Jan Svankmajer and the Brothers Quay, in particular, should absolutely not miss the “Labyrinth of Darkness” DVD. It comes with an eclectic filmography of shorts that include:

The Ballad of the Green Wood – An experimental woodmation that plants the seeds of “Pied Piper.”

Club of the Abandoned – A tragicomic play acted out with broken manikins. One of Barta’s most intricate and famous shorts.

Disc Jockey – A mix of animation and cutouts, all of them circular, in the life of an unseen DJ. Unfairly maligned for its abstractness.

The Last Theft – A Guy Madden-esque live-action silent film about a jewel thief and vampires.

Riddles for a Candy – A silly shape-shifting riddler that doesn’t translate well, but twinkles with cuteness.

The Vanished World of Gloves – A compressed historical survey of cinema told by an enclave of gloves whose lost civilization is accidently excavated at a construction site. A personal favorite.

Much of Barta’s work was on my backlog for the Poor Little Animated Shorts series, but I’m glad I was able to dedicate a more detailed treatment just for him. Keep an eye out for two possible upcoming features by the great Czech master: “The Golem” and “In the Attic or Who Has a Birthday Today?” 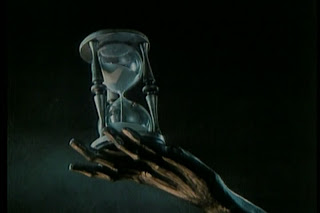 Unfortunately, I was forced to watch this at school at a barely teenaged age, thus never wanting to see it again...

I do not know the brother Grimm tale, and do not remember this film very well, but I believe some of the motifs (like the two survivors or the rape part) are taken from Viktor Dyk's version of the story. Which I really recommend you to read. This film takes a completely different general outlook on the story than the book does (Dyk was a poet and it shows), but I think it only makes them more interesting to compare.