There are only a handful of major characters, all of them relatively normal, educated middle-class young adults. The central protagonist is introspective and searching for romance, or failing that, any meaningful connection with another. Possibly shy and inexpressive, he/she is still quite talkative and attention is focused on their small talk, personal opinions and weighty philosophical discussions. The setting is present day. Camerawork is never fancy. There is hardly any plot, action, celebrities, close-ups or music. A consistant realism, often spellbinding but occasionally banal, enshrouds the production. 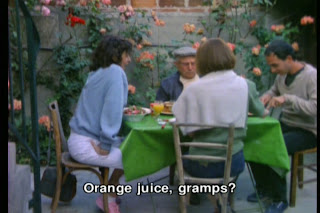 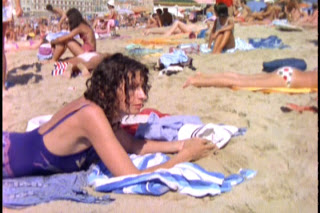 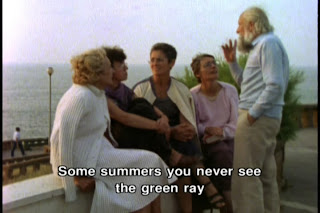 [Images: Some representative shots from Rohmer’s “The Green Ray” (also known as “Summer”) provided as context.]

So when I say that Rohmer’s “Perceval” (1978) is one of the most self-consciously artificial productions I have ever seen, you can understand why it came as a surprise. Audiences did not enjoy the shock, endowing Rohmer with his first financial disaster and sending him back to his roots for the next 22 years. Even today, this detaching musical adaptation of Chrétien de Troyes's incomplete 12th century grail-quest poem sticks out so prominently from Rohmer’s oeuvre that it still invites controversy. 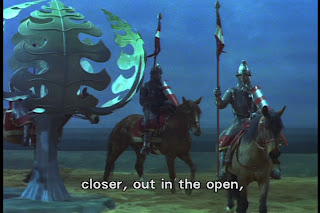 Perceval of Whales is a simple lad, raised by his mother in the countryside so that he won’t be tempted to pursue his father’s fatal career as a knight. As fate would have it, Perceval encounters five of King Arthur’s angelic agents while hunting in the woods and vows to join their ranks with all due haste. Frabrice Luchini plays Perceval as a naïve, but well-meaning singing zombie, an enigmatic unstoppable force that is quick to defend maidens and punish foes. The bulk of the film tells of his rise to greatness and his quest for the Holy Grail, but two other stories are also framed within his: the adventures of Sir Gawain and the Passion of Christ. 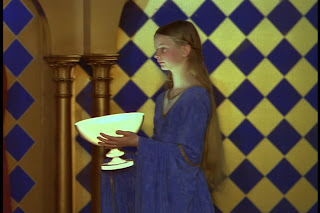 The plot and dialogue is extremely true to its source incorporating rhyming couplets and even abruptly cutting off at the point where the author died. Bits and pieces will already be familiar to fans of Arthurian legend or “Monty Python and the Holy Grail.” Of much greater interest than the tale itself are Rohmer’s maverick production choices. 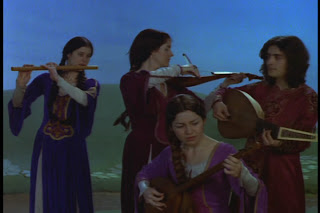 [Image: The chorus not only has to do narration and music, but they work overtime as real-time sound editors and bit players.]

The stage is set by a chorus singing the exposition and a Renaissance-era sound crew simulating bird calls. Most of these musical accompaniers will get drawn into the plot as minor characters, but their absence is hardly missed by the leads, who are generally fine singing their own narration. The effect is quite odd, but beautiful and frequently funny. Perceval bellows out descriptions of his actions rather than performing them, singing in the third-person along the lines of “He did not know it yet, but he was in love,” and “He told his tale up to now, but to do so for the audience would be boring and redundant.” 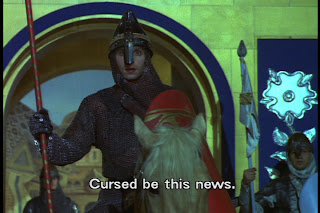 [Image: “Curse be this news. And cursed by he who brought it.”]

The set design, easily one of my recent favorites, looks like a children’s pop-up book and is modeled after medieval tapestries. The ground is painted green for grass and blue (with glitter!) for water. Identical metal trees with spherical leaves comprise the forest. When something more than a 2D backdrop is needed for buildings, cheap cardboard and plaster, spray-painted gold, suffices. The castles are usually not much taller than the actors, but ridiculously roomy inside. One or two “rock formations” get recycled to distinguish locations. 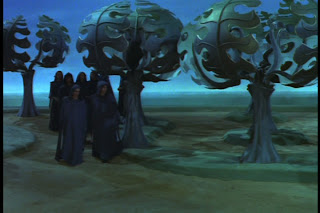 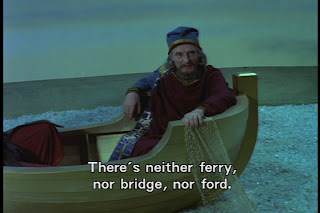 [Images: (Top) Monks passing through a dense forest and (Bottom) the Fisher King giving Perceval the bad new about the “uncrossable river” (pictured) that bars his passage for leagues in either direction.]

Somehow Rohmer never lets the set design feel shabby. It’s all so cohesive and meticulously thought-out. Artifice is used in ways that wouldn’t even save money, and often times the cheap-looking props and simple painting must have been expensive and time-consuming. 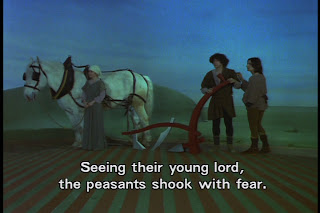 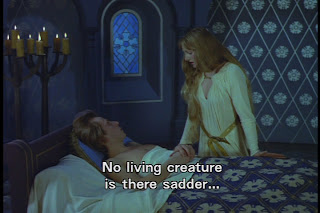 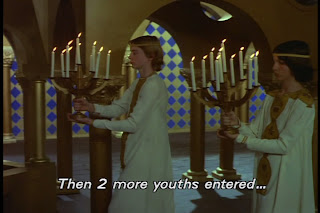 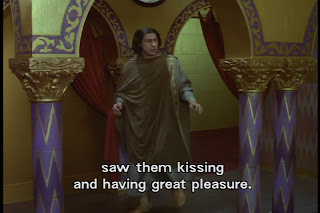 [Images: A tasteful eye for patterns and a strict color palette of pale green, cornflower blue and gold with highlights in red and purple implies the underlying artistic sensibility behind the flimsy sets and gives the presentation a cleanliness and rhythm.]

When questioned about his radical change in style for “Perceval,” Rohmer defends his decisions by explaining that given his unfamiliarity with 12th century gestures, dialogue, decoration and landscape, it was more honest to embrace the artifice and deliver the original writing unaltered. Even historically-researched recreations would still be just a better lie, rather than a deeper truth. 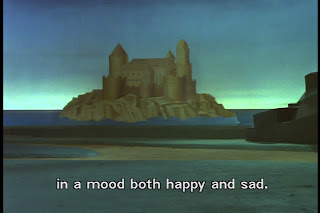 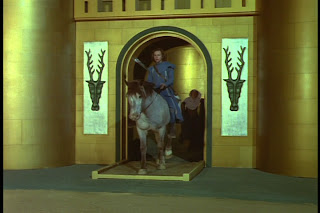 The denaturalized, emotionally neutral acting is particularly at odds with Rohmer’s usual sympathetic intimacy and may alienate fans of his traditional work. The 2+ hour running time, visual repetition and triply inconclusive ending (even the side-stories are cut-off) may count as significant drawbacks for some, but I didn’t find them terribly egregious. Objectively speaking, I should admit to selective blindness to flaws when caught up in my ardor for offbeat musicals. 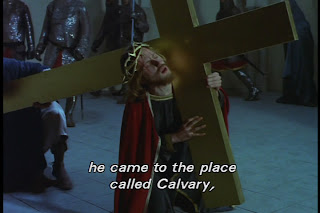 [Image: With special guest appearance by Jesus of Nazareth!]

After the initial shock, one can still perceive Rohmer’s touch still present. His camera holds back from close-ups, giving the actors room to maneuver either on foot or horseback. The framing is simple and straight-on. The “everyday” appearance of the characters is still there, even if they’re wearing period costume. The emphasis on verbal and literary aspects over action and progress remains an important part of appreciating it. 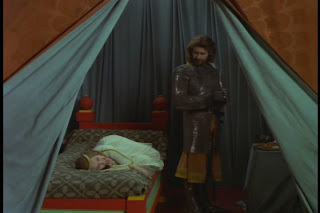 I’m quite fond of Rohmer’s more typical films, too, and I think he’s a worthy, if low-key, member of the French New Wave. One can sense his influence in post-1980’s slacker indies and possibly even mumblecore, though few people my age seem very excited about his work. Maybe “Perceval” is just the film to convince them of his versatility and talent. He’s always been considered a genius of observation, but here’s proof that he may have had a genius of invention tucked away, too. Still, the film had little mass appeal back in 1978 and there’s not much reason to think that’s changed. 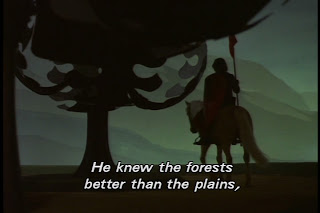 Posted by FilmWalrus at 3:50 PM

This sounds really fascinating! I've been reading lots of Chrétien de Troyes for my studies and I highly recommend his novels, they're original and surprising. Mixing Rohmer and Chrétien must be worth watching! Thanks!

I haven't read any of the original poetry or any de Troyes novels, but I suspect you'd really enjoy this adaptation. The attempts at faithfulness are surprising, impressive and entertaining.