Review of The Lovers on the Bridge 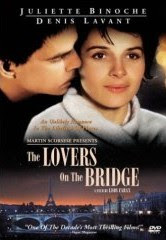 Leos Carax (a cooler anagram of his birth name Alex Oscar) is a bit of a punk. He’s a director who often bares the complexities, innovations and depths of Godard, but also flashes the facile decadences of a self-absorbed pop-culture addict. Somehow Godard’s overt artistic and political agenda have [deservingly] made him an international icon, while Carax remains relatively unknown outside of France, despite updating Godard’s youth culture energy and savvy experimentation for a generation bound to the 1980’s. Some critics have also noted this kinship while other reviewers have, instead, tended to group Carax with Luc Besson and Jean-Jacques Beineix as a purely-kinetic hipster, tacitly accusing him of asking his audience look, but not to think or feel. I disagree with the latter.

I don’t know how I found out about it, but I watched Carax’s “Mauvais Sang” (“Bad Blood,” 1987) several years ago. I’d read that the vaguely futuristic plot involved an epidemic STD that proves fatal to anyone who has sex without loving there partner, but I really didn’t know what to expect. It sounded like there was plenty of potential for silliness and kitsch. What I was not expecting was Piet Mondrian-esque rectilinear primary-color experiments or impenetrable poetic ruminations where dialogue usual sits or a story so loose and obscure that the plot I’d read about seemed like an explanation or interpretation rather than an actual description. I wasn’t sure, but I came to a tentative conclusion that I liked it. I doubt I understand it properly. Someday, I’d like to see it all again.

I’m beginning to suspect that the only way to prepare for seeing a Carax film is to see other Carax films. In that spirit, I sat down to watch his most well-known film, “The Lovers on the Bridge” (1991). The film is a tortured romance between two homeless people living on the Parisian Pont Neuf, the oldest bridge in Paris, whose name translates ironically as “New Bridge.” Alex (Denis Lavant) is an acrobatic fire-eater who downs alcohol and sedatives with alarming vigor while Michele (Juliette Binoche) is a riches-to-rags artist who has pounded the pavement since discovering that a rare eye disease will rob her of her career. 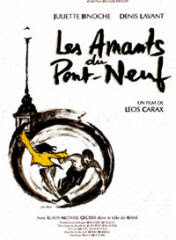 [Image: As a clever self-referential touch, Juliette Binoche, who plays an artist, painted the movie’s poster,]

They meet when Michele is on her way to the beach and drops her painting supplies. Their hands briefly touch as they reach for the same paintbrush. Just kidding. Michele witnesses Alex passing out in the street and getting run over. When he returns from the hospital, he finds Michele huddled on his trash-strewn bench on the closed-for-repairs bridge.

While the film is initially pretty inaccessible, the audience is gradually warmed to the Alex and Michele characters. Lavant and Binoche were already Carax alums (from “Bad Blood”) by the time of this film, and they (get ready for a tongue twister) directly synchronize with the director’s idiosyncrasies. Binoche gives up her usual otherworldly beauty for a more befittingly ruffled hobo look while Lavant dives into his shambling vagrant with a high-strung passion and typical compact roguishness. They are both a bit erratic and uneven and they should be. Carax wisely eschews over-glamorizing the freedom-of-the-street and keeps his characters in an unpredictable and not always sympathetic limbo.

Like “Bad Blood,” the film is conspicuously sparse on characters, channeling our attention and eventually a deep emotional intimacy into the two leads. Carax goes to some extreme lengths to keep us in his depopulated vision of Paris: we see only the back of the passenger’s head when Alex is run over, a nightclub is represented only by the dancing feet visible from outside, a brief scene with a policeman shows the officer asleep, etc. The only other characters whose presence is made explicit are the homeless and jobless transients. They include the only other multi-line speaking part, Hans, a former guard who still has the keys from his old posts (real keys, not symbolic ones like in EVERY OTHER MOVIE EVER. Sorry.). The way Carax inverts the usual view of Paris denizens is refreshing and provocative in itself, letting the “productive members of society” fade away and bringing the marginalized into focus.

When critics speak of Leos Carax’s work they’re quick to note his excess. “The Lovers on the Bridge” attracted particular attention for its financial surplus: the 8.5 million franc budget blossomed into 70+ million over a rocky three-year production, due largely to Carax’s unwillingness to compromise and his resolve to build a full scale replica of the Pont Neuf. I, too, tend to bandy about the word ‘excess’ quite a bit on the Film Walrus, but I think critics use it misleadingly in this context. To call “The Lovers on the Bridge” an exercise in visual excess is to let a couple of dizzyingly transcendent scenes overshadow a movie which is dominated by an intentionally modest mise-en-scene and static set.

Almost all the action takes place on the single bridge, a lonely hulk of masonry undergoing reconstruction. Yet almost all the reviews focus unduly on a nighttime scene where Alex and Michele run through the falling sparks of bicentennial fireworks and water-ski down the sparkling Seine on a stolen motorboat. This interlude shows the fleeting kernel of ecstasy that drives the characters and allows them to experience soaring joy even as they burn up in the atmosphere. It’s not misguidedly unqualified propaganda for the freedom of having no property or responsibilities so much as a physical manifestation of the illusive fulfillment achieved by Alex and Michele’s love. It feels like an enchanting trance and unfolds like a preposterous dream. In fact, I think it serves roughly the equivalent purpose as a dream sequence and shouldn’t be treated as though it pushes the entire film into fantasy.

For the most part, the film has a certain grittiness, a sense of destitution and desperation that occasionally bursts from below the surface. Carax’s camerawork could lend a visual excessiveness to even this crumbled, quiet atmosphere, but he shows due restraint when necessary. Like everything else in the film, the cinematography is deeply interwoven into the characters and remains pinned to their activities and their perspectives. As a consequence, the camera cuts, spins, pans and even takes a virtuoso van-ride during their moments of heightened intensity (such a gallop through a subway, Alex’s delirious fire-spewing performance and his jealous anxiety when faced with the possibility of losing Michele), but it also matches their quiet moments: the sleep, the boredom and the tedious routine of day-to-day survival. Carax knows when to leave the camera in place and let a shot run long, demonstrating a confidence and discernment not shared by some of his hipster contemporaries.

Yet the film does indulge in excess, which will either endear or alienate the viewer depending on their taste. The excess is really an emotional one, characterized not so much by external melodrama as the feverish extremes with which Alex and Michele internally register their ups and downs. They can make love look downright painful, turn insomnia into opportunity and extend melancholy into misery into self-mutilation.

In retrospect, the difficult opening scenes of Alex staggering through the street can be read as more than just the drunken culmination of addiction. It’s like the emotional equivalent of a seizure by someone prone to emotional intensity, but without the maturity and stability to cope.
Carax never uses emotional excess to undermine the complexities of his character with broad melodramatic strokes. He even pokes holes in the oft-used device of transcendent love, arguably the central theme, by showing Alex’s selfishness; his gluttony for love. In the final third of the film he often acts inexcusably malicious to preserve his relationship with Michele, even going so far as to tricking her into losing her money and preventing her from getting an eye operation that could restore her ambitions. Many directors would be too afraid of losing audience sympathy to go that far.

Carax definitely wants his film to be felt and not just viewed, and that’s why the mood is so thick and the emotions so taut. I wouldn’t go so far as to call it terribly manipulative, but there’s no question that Carax is willing use the tools of the trade to make an impression. The sophisticated soundtrack, featuring David Bowie, Arvo Part and French pop, plays a large part in shaping that impression. The eclectic tone switches from choral to synth and from pop to minimalism to capture the essence of each scene.

“The Lovers on the Bridge” is a film that rewards emotional investment as much as visual analysis and it does so in an intellectually informed and film-history aware manner. In my mind, this should make the film interesting for any number of daring viewers, but it didn’t manage to get in front of very many eyes that didn’t belong to film critics. The initial financial failure may be the result of marketing that played up the stylish romantic youth-culture angle and forgot to mention the poverty, anguish, depth and formalism. It’s a difficult mélange to sell to a mass audience.

That painting is surprisingly great-looking.