Review of A Blade in the Dark 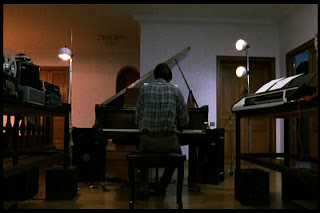 “A Blade in the Dark” (1983) was one of Lamberto Bava’s earliest films, and it has a pared-down low-budget aesthetic that makes it more realistic and streamlined relative to his later successes like “Demons” (1986). Lacking money for show-stopping special effects or high production values, Bava instead opts to make a giallo boiled down to its pure ingredients. The decision doesn’t allow a lot of room for creativity, but the director manages to take the house+protoganist+killer formula and do it well.

The film opens with three children in a dark (presumably haunted and/or evil) house. The two braver children are egging on a young blonde boy to go into the cellar, a yawning chasm emitting malignant vibes. If you recognize the boy (an uncredited Giovanni Frezza) from “House by the Cemetery” (1981) than you no doubt already know that he’ll ignore his better judgment (and the screams of the exasperated audience) by descending into the darkness yet again. A few moments and a wicked laugh later, a single tennis ball hurtles from the void. It leaves bloody splotches everywhere it bounces as the surviving boys run away screaming. 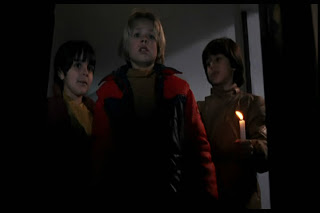 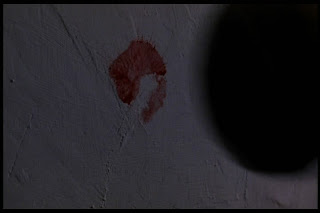 As it turns out, this isn’t the beginning of the movie. It’s the middle of a film being scored by Bruno (Andrea Occhipinti), our protagonist. The director of the film, Sandra, puts Bruno up in a spooky house during the duration of the shooting schedule, to set the right mood for his work. The house isn’t really all that scary, but Sandra has her own reasons for associating the building with ill tidings.
Bruno’s music sounds like it could by Claudio Simonetti (and his name could be a reference to the great giallo composer Bruno Nicolai), but it’s actually scored by Guido and Maurizio De Angelis. It’s effective and gets a few scenes to strut its stuff, but its a little too obvious to really work. 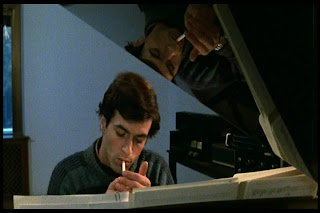 Bruno doesn’t have to stay in the house long before he is beset by strangers. A woman named Katia pops in and they give each other a scare or two. She has the manic, overly-aggressive and borderline inappropriate familiarity that recalls the similarly over-the-top performance of Daria Nicolodi in “Deep Red” (1975). She has just the sort of obnoxious personality that you miss as soon as the person goes missing-presumed-dead, which happens about ten minutes after she is introduced.
The killer, in this case, goes largely unseen except for his “blade in the dark” (actually just a razor knife). Considering that the blade has breakaway segments and could be easily neutralized by a horizontal swipe or even a mild show of self-defense, it is to Bava’s credit that he actually succeeds in making the item menacing. The evil-sounding click of its adjustable length being adjusted is its memorable signature. There’s a good scene straddling the fence between silly and horrifying, where the killer keeps trying to thrust the blade through a tightly-meshed sheet of chickenwire. 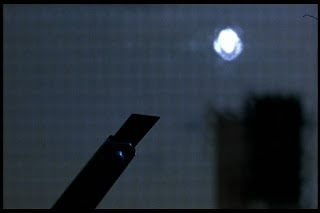 Not that this is the only weapon used by the villain, but it was my favorite. The film consistently characterizes the killer though images of everyday items used as weapons and gripped feverishly, creating intrusive diagonals across the frame. These shots aren’t just throwaway filler or tension fodder, but provide clues and even some psychological insight through the fragments of clothing visible, the choice of backgrounds and the stylized movements. 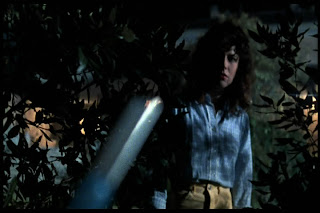 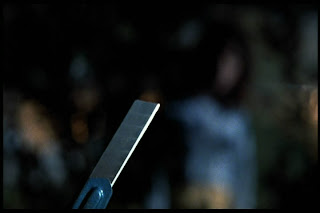 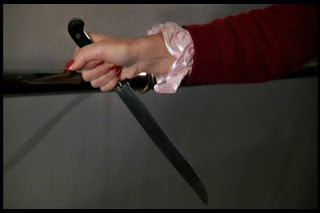 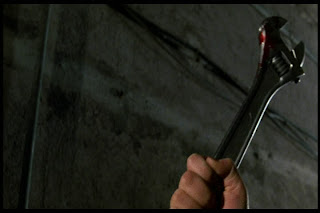 The day after meeting Katia, Bruno meets Angela, a friend of Katia’s who is trying to find her whereabouts. When Bruno offers her unlimited access to his pool, her conviction to find her missing friend wanes. After a series of voyeuristic scenes in which she changes into a swimsuit and takes a swim, she finds the razor knife on the pool bottom. She also gets stalked by the camera and a character or two, but surprisingly, nothing much comes of it. 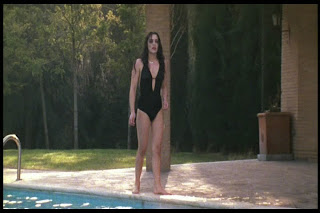 However, far from getting off the hook, Angela ends up with the film’s best and most painful to watch death sequence. Finished with her poolside romp, she goes upstairs to shampoo her hair in the sink. Having thus maximized her vulnerability, the killer is irresistibly drawn to do her in. A shot where her hand is pinned to the table with a knife while groping for soap is brutally brilliant. The worst part isn’t even the knife going in, but the fact that she eventually frees her hand… without taking the knife out of the table. 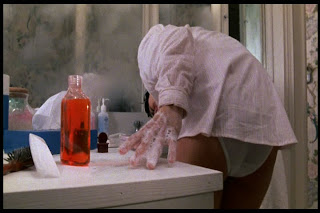 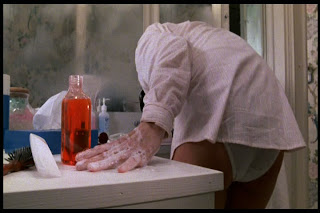 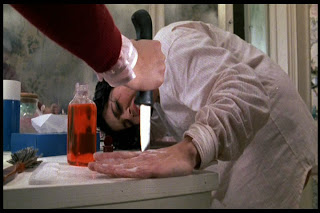 With a seven person cast, the film is low on both victims and suspects. Considering that I’ve already spoiled that Katia and Angela are both dead (presumably), that leaves only the director Sandra, the groundskeeper Giovanni, the landlord (future giallo director Michele Soavi in an all-too-brief cameo), Bruno’s slightly-neurotic actress-girlfriend Julia and Bruno himself. Of course, there is an offscreen eighth character named Linda, who used to live in the building, but I won’t give everything away. The acting and dubbing keeps us from identifying too much with any of these characters, but also provides some unintentional comic relief. 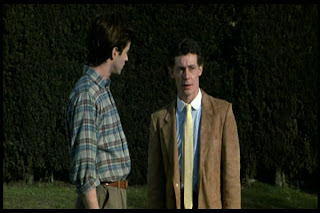 [Image: Michele Soavi not looking the slightest bit dapper in the world's ugliest tie.]
This minimal setup allows Lamberto Bava to downplay the mystery elements and elaborate plotting in favor of a classical gothic approach. The few characters remain suspicious of each other by necessity and constantly scare one another. The dynamics between Bruno and Julia are so tense that one hardly knows whether they are about to kill each other or have sex. 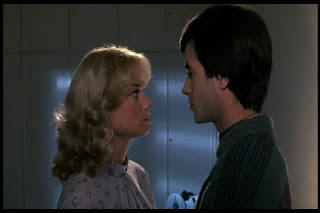 Bava originally made the film as a multi-part TV special and so designed the script to have a major action scene every 25 minutes. The constraint seems to have helped his pacing and actually improved the finish product. The film has a tempo that is neat and regular, without patches that drag or burn out.
The house, while not particularly spooky, is a haunted house for a modern Freudian-informed audience. Gone are the contrived grim booby-traps we are used to: no huge fireplaces, suits of armor, gargoyles, stone cornices, spiky iron gates or crystal chandeliers. Mostly there is a blank emptiness, a feeling of stark impersonal abandonment and loneliness. Bava largely isolates the characters to play up this effect, leaving the few interactions for exposition, suspicion and accidental scares. 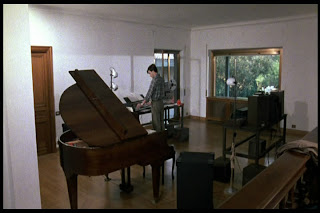 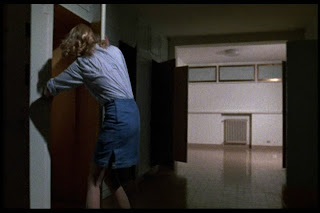 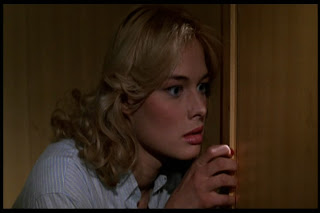 [Images: While granting that the barren sets are probably 90% the result of low-budgets and constrained art direction, the 10% or so that is intentional kind of works.]
Bava’s one bit of mise-en-scene flair (other than the chickenwire) is a bunch of old tennis balls. Once again, seemingly mundane (and in this case, not even pointy) objects are imbued with malice and meaning through the context, atmosphere and treatment of the film. 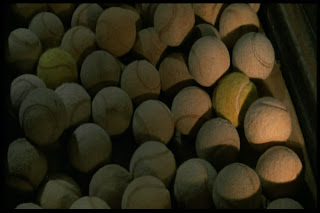 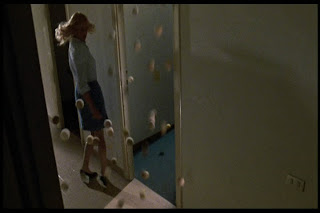 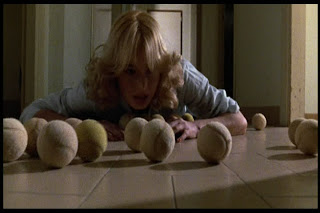 [Images: It may help make these screenshots seem appropriately chilling if you play some Goblin on your computer and look at someone chasing you with a knife and then back again a few times. Then again… maybe they would still just look like musty tennis balls.]

Despite, or perhaps because of the overall simplicity, the tension and sudden scares in the movie tend to work. They have an unadorned realism that has more creditability and less aesthetic removal than most heavily-stylized gialli. At the same time, Bava neatly skirts around the pitfalls in generic thriller territory and adds little twists and variations on such old ideas as the haunted house, the victim trapped in a house with the killer, the chase through the corridor, and so on. It all comes together in a note-perfect final action scene, ending revelation and illuminating coda (while borrowed from an acknowledged 1960 classic, it has been updated with giallo sensibilities), and reveals that Bava really was thinking out the structure and dynamics of the film quite carefully.
Walrus Rating 7.5 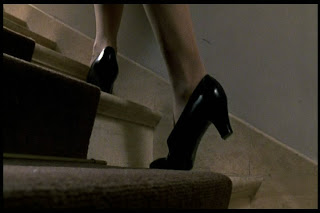 Posted by FilmWalrus at 2:05 AM

It's so pomo of him to have the characters filming a horror movie - and cheesily, at that.

post-modernism should be the only modernism