Review of The Last of Sheila 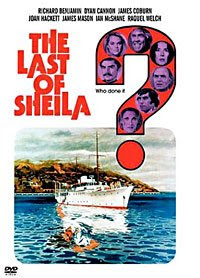 Every once in a while I come across an American thriller that has the feel of a good giallo. “Alice, Sweet Alice” (1977) is perhaps the best example. “The Last of Sheila” (1973) also has the magic touch, likely due to its cynical tone, convoluted plot, extended twist ending and lead actor Richard Benjamin’s resemblance to Jean Sorel.

Alternatively you could see the minimal settings (most of the action takes place aboard a yacht) and single murder as heralding back to the golden age of detective fiction when detectives ushered mansions full of upper-class suspects into parlor rooms and announced shocking revelations. Certainly the all-star cast, tasteful lack of nudity and the complete absence of through-the-harp shots [1, 2] sadly mark this as a non-giallo film.

James Coburn plays Clinton Green, a successful producer who claims to be planning a feature film on the final days of his late wife, to be titled “The Last of Sheila.” He’s assembled a group of down-on-their-luck Hollywood talents including a writer (Richard Benjamin), his wife (Joan Hackett), an actress (Raquel Welch), her manager (Ian McShane), a director (James Mason) and a casting agent (Dyan Cannon). They are desperate enough for work that they agree to board Clinton’s yacht (named Sheila, of course) and submit to his elaborate week-long game titled “The Sheila Green Memorial Gossip Game.” It should go without saying that each guest knew Mrs. Green and was in the vicinity when she was killed in an unsolved hit-and-run accident exactly one year previous.

Clinton’s game involves issuing each player a “fictional” secret in the form of “I am a ______” where the blank might be shoplifter, homosexual, etc. Each night the players are given a clue and let loose at a port or island to try and find a piece of evidence that identify the owner of a secret. Once the person with that secret gets to the evidence, it is assumed that they destroy it and the round ends for that night.

The novel entertainment has all the requisite clever riddles and inter-player plotting, but the guests soon guess that it’s more than just a game. On the second night, someone takes it deadly serious. The resulting murder investigation hinges on Clinton’s intentions for how the week was supposed to unfold and the truth behind Sheila’s death.

“The Last of Sheila” can be divided pretty equally into four sections: the set-up, the game, the investigation and the twist. Unlike the typical murder mystery which lulls, often from the get-go, until the final act, “Sheila” pulls you in with its promise of intrigue and keeps things escalating. The game itself would make for a decent movie, but cutting it off with an unusual murder case ensures that things will stay interesting. The coup de grace comes just when things seem all wrapped up; in the final 30 minutes all the little hints and inconsistencies come together to reveal a really exemplary scheme.

One should expect no less from the surprising screenwriter pairing of actor Anthony Perkins (“Psycho,” “The Trial”) and composer/lyricist Stephen Sondheim (“Into the Woods,” “Sweeney Todd”), whose efforts were rewarded with a best mystery film Edgar Award. They based parts of the film on their experiences arranging scavenger hunts for celebrities in New York.

The writers also took care to assume their audience would be mystery aficionados already familiar with the usual tricks, and so they laced the screenplay with morbid and self-referential humor (thankfully free of slapstick). Highlights include a murder victim in double-drag (a man made up as a woman dressed up as a priest) and a meticulous strangler who, unable to find gloves, dons a pair of garish sock puppets. Though the final answer is marvelously contrived, so many clues have been left for the audience that much of the mystery can be solved in advance and shouldn’t leave viewers feeling blindsided or cheated.

The key here is that the clues are not sealed away by a taciturn detective nor broadcast to everyone as dead giveaways. Hardly anyone fails to pick up on a minor character “casually” mentioning their a reclusive identical twin or an investigator surreptitiously noting that a suspect is left-handed or, really, a zoom shot on anything no matter how seemingly irrelevant. It’s an issue of efficiency: if a writer/director puts something in and the editor didn’t take it out, odds are that it’s important.

Good mystery writers know how to get around this problem. Weak solutions involve trying to do things really inconspicuously (which many people will still see through) or saturating the story with red herrings and irrelevant details to provide cover fire (risking leaving the audience confused, frustrated or bored). Stronger solutions involve giving the clues double purposes, one that has a direct application to the current action and one that has deeper meaning when placed in its final context. The Perkins/Sondheim team is quite adept at working in these dualities, ensuring that attentive viewers will pick up at least a few, but not without a little work.

By structuring the film as a puzzle game about a puzzle game, director Herbert Ross openly invites us to play along. For someone like myself, who enjoys riddles, lateral thinking puzzles, detective stories, gialli and ending twists, this is prime entertainment. But does it succeed as a movie?

I’ve already mentioned that the steady setup->game->investigation->finale division makes the pacing work, while the plot is well above-average for the genre. The seven diverse characters monopolize the screen, the better to carry out their primary duties of keeping the story rolling and the suspicions balanced. The quality of acting is clearly a secondary concern, despite the big names.

James Coburn is great as the self-satisfied sadist in charge of the show. You can tell that Dyan Cannon and him are both having a lot of fun while the others are a bit too serious. Raquel Welch is just there for eye-candy and Joan Hackett is around as the straight foil, both in dangerously dull roles, though not without necessary functions. Ian McShane is the most forgettable of the bunch while James Mason is disappointingly the most wasted. It’s Richard Benjamin, star of the short-lived SF TV show “Quark,” who provides the necessary core as the sharp, inquisitive lead.

Herbert Ross’s unadventurous directing is a good example of why the Italians had such an edge over American thrillers in the 1970’s. It gets the job done, employing zooms, POV sequences and flashbacks as a matter of functionality rather than style. Ross was never a great director, but he is clearly capable of handling a complicated script: telling the story with just the right amount of attention on each detail to keep the action clear and the filler concise.

If it lacks the excess of style that makes gialli such a treat, it does at least share one Italian hallmark: great set pieces. Despite the relatively small number of locales, Ross makes the most of them. The yacht is a good substitute for the traditional inaccessible manor, and the art director keeps it thematically stuffed with board games, puzzles and hidden clues. The two major landward excursions are suitably seasoned with local flavor, especially a crumbling monastery where hidden James Coburn recordings harmonize Gregorian chants. In fact, one area where Ross may exceed his European genre contemporaries is his staging. When he’s got nothing better to do, Ross moves his characters around the main deck like chess pieces preparing for a surprise mate.

All told, this is a mystery for the mind, a perplexing confection where dialogue, motivations and camerawork all kneel before and wait upon the enthroned plot. This type of single-mindedness usually bothers me when it is employed for the sake of emotional manipulation, but somehow I feel more forgiving when it’s done in the name of intellectual manipulation. Perhaps it’s because Perkins, Sondheim and Ross never forget to entertain.

“The Last of Sheila” belongs to the same postmodern comedy-mystery family as “Sleuth,” “Deathtrap,” “Murder by Death” and “Clue.” I think it’s one of the best of the breed, up there with another one of my favorites, “8 Women.” Don’t let me inflate your expectations beyond guilty pleasure limits, but do check this one out if your want some safe and reliable fun.

Oho, a clever, FAIR mystery, you say? I'll have to check this out!